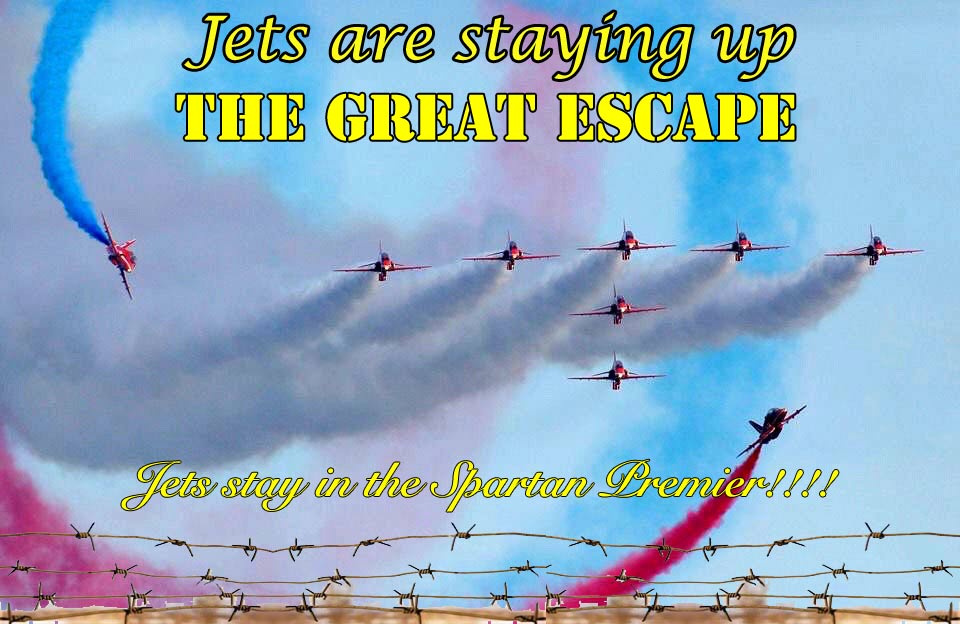 It was close in the end, but Jets dramatic 4-2 win at Berkhamsted on our final day of the season proved enough, in the end, to preserve our Spartan South Midlands Premier status and our record of never having been relegated.

Following our win, Stotfold had the tough ask of winning both of their final two fixtures. They managed the first, after a bizarre final 15 minutes when they turned around a 3-0 deficit to beat a strong Biggleswade FC team 4-3. That left them needing to win their final game two days later against Hoddesdon Town, but it ended 0-0, leaving Jets in 19th place, safe not only from the relegation spots but also from any league restructuring that could impact the team in 20th.

Wow, what a day, what a performance and two stunning headers to put Jets into a hopeful position. The maths were straightforward on the day. To avoid the “bottom spot in the FA relegation guessing game” Jets had to win by two goals clear to edge above Cockfosters on goals scored to at least ease their mind that the bolt on drop box was gone, the problem was it was away to promoted Berkhamsted who are on fire.

New boss Tim O’Sullivan gave the most rallying talk and sent his new troops out to pull off the unexpected haul to safety that just five days ago looked a dream not reality.

A guard of honour from Jets for promoted Berkhamsted

A massive 171 crowd and the Berko ultras and kids teams were roaring their team on the promotion carnival day, but Jets had to respond, and the prize they were chasing was survival in the Premier division.

In the bright sunshine, the battle commenced, and both sides had periods of play, Jets at 0-0 looked more up for the day, and they had to be. Early exchanges were hopeful but they often are, and two big scrambles around the penalty area built Jets hopes but no net bulge to cheer them.

Then the breakthrough with Andy Amoah getting a low searcher across the box and young Vass Mandeville coolly placing the ball past the home keeper to inch perfection 0-1 (24 mins).

This was Jets best period in the draining heat, and it was end to end. Berko equalised and it was a very disputed penalty. The ref explained later that Tom Gibson had fouled the attacker outside the area, but played the advantage and he believed he fouled again putting arms around him inside. The striker held off the defenders before getting a rifle shot in, but was denied by a stunning save from 16 years old Juliusz Pazio who was thrown into action for his debut on Thursday in the 3-0 home win against Hoddesdon due to a keeper injury crisis. The referee decided that since he didn’t score he gets the penalty, not sure about this one, it’s like two bites of the cherry, but the logic is fair and explained and Adam Mead hammered home 1-1 (33 mins). 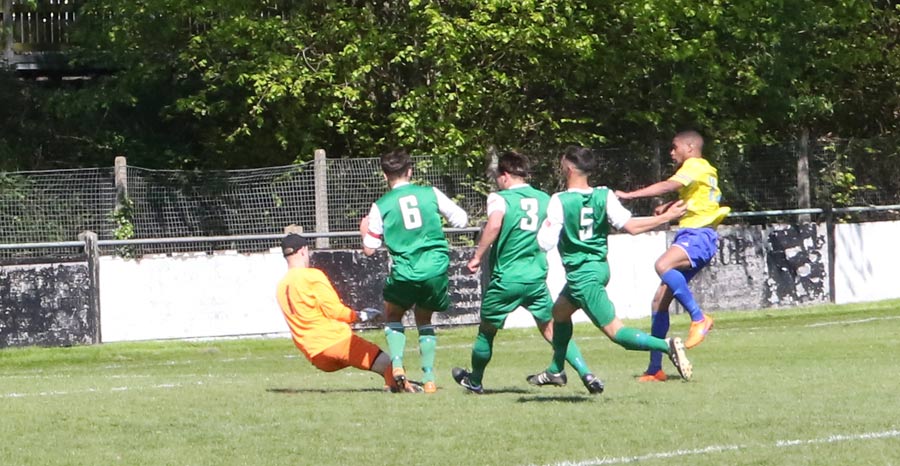 The match was highly competitive and a couple of yellows followed in the end to end game. Vass then picked up a well deserved yellow for a late and clumsy one, but Berko found themselves down to ten men when a coming together on Vass got out of hand, a mad decision that will cost the player his St Marys cup final place next week due to this suspension.

Jets also suffered a significant blow losing skipper Jude Bell, injured and playing well, but the 1:1 bench cover having Jack Halcomb coming on meant no change in the team formation and Jack carried on perfectly.

Halftime 1-1. Jets still have the same job to do but half the time to do it.

The heat was another worry for Jets. We usually fade so today was hot and draining, but we can’t ease off. Pat Fallon, Tims assistant, warned, “keep something in the tank for the last ten” words that were to come so true !!

Blunden pounces to put Jets back in front 1-2

Andy Amoah again provided the cross box ball for Chris Blunden to latch onto to slot against one of his former clubs this season 1-2 (58 mins) and the dream is back on.

Berko responded, throwing on some big guns from the bench, the sort of subs that, if you are the opposition, makes your heart sink. Still, though, Jets kept at the gameplan, but then disaster as slack play turned a Jets attack into a Berko goal. With Jets caught upfield because they had to get the all-important +2 goals margin, Berko sprung, and Ollie Cox (64 mins) levelled it.

Would this melt Jets? Scott Pugsley came off having given his all and another teenager Issac Ebelebe came on, and the move was to be highly prosperous.

In the last ten now and Jets think just a win might keep them off the dreaded bottom spot. Time is running out then Isaac crossed a pinpoint cross to Jets Mister workaholic Tom Gibson who rose like a salmon and headed brilliantly past the arms stretched keeper into the top corner 2-3 (84 min). 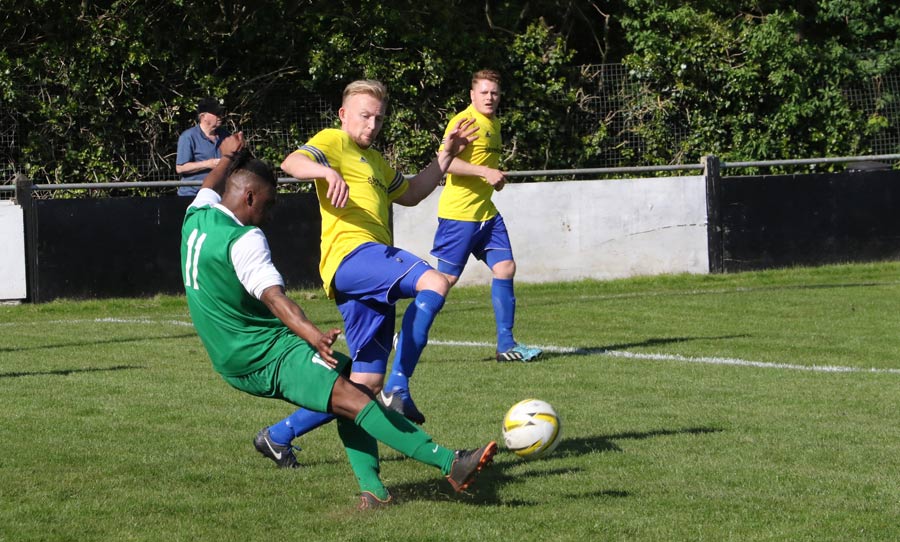 As Jets look for the crucial 4th goal, Olawale Salami sends in a fantastic cross

Was it possible? Jets attacked again from the kick-off and debut from reserves kid Olawale Salami on his first start in the first team dropped a pinpoint cross for the young centre-half, Vass Mandeville, to head home 2-4 (86 mins). The crowd erupted as it became clear Jets had a good few supporters in the mass crowd. It was scenes of joy as the escape just might be possible now. 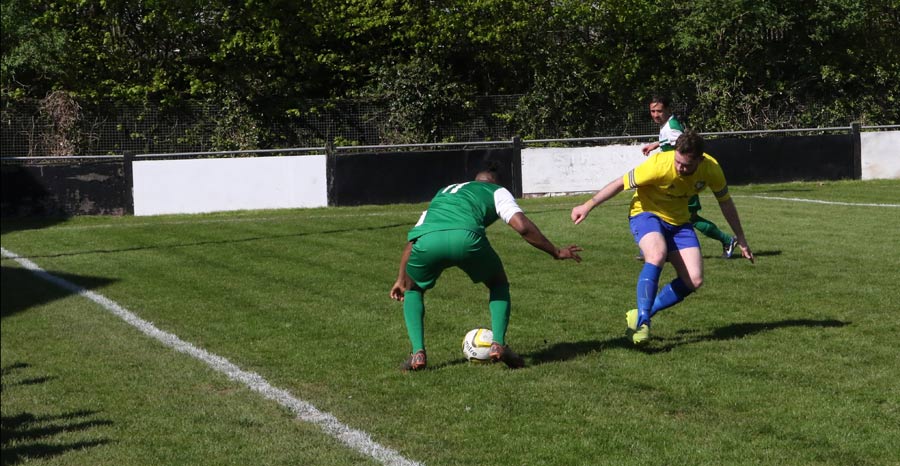 Jets play to the corner flag to see out time

The corner flag became Jets best friend because every time they got the ball that’s where they went with it. As they battled and battled to run the clock down and hold that lead, the win looked secure, but Jets had to have the two-goal lead to jump Cockfosters in the table who had completed their fixtures. 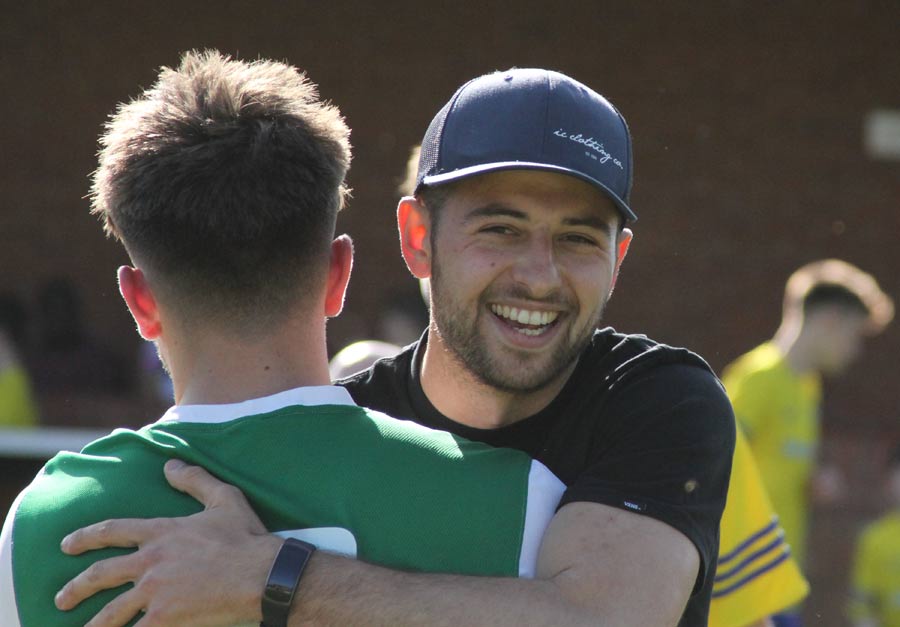 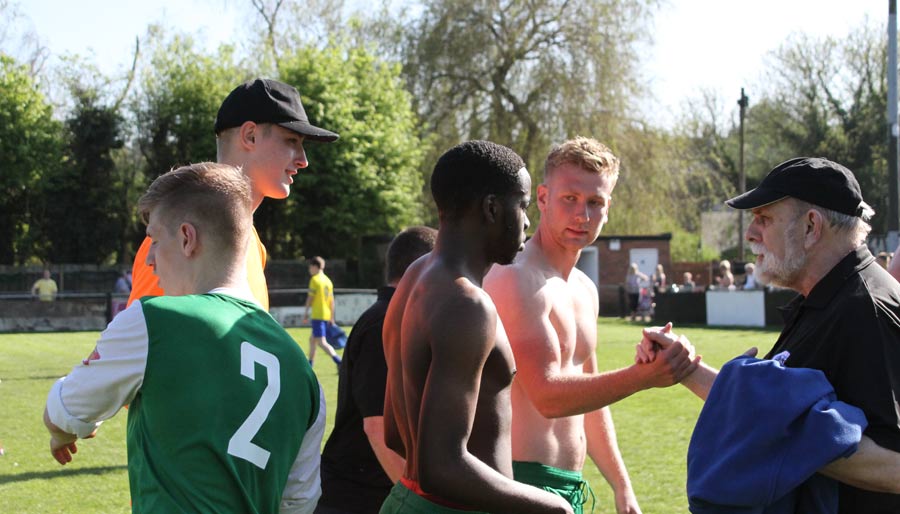 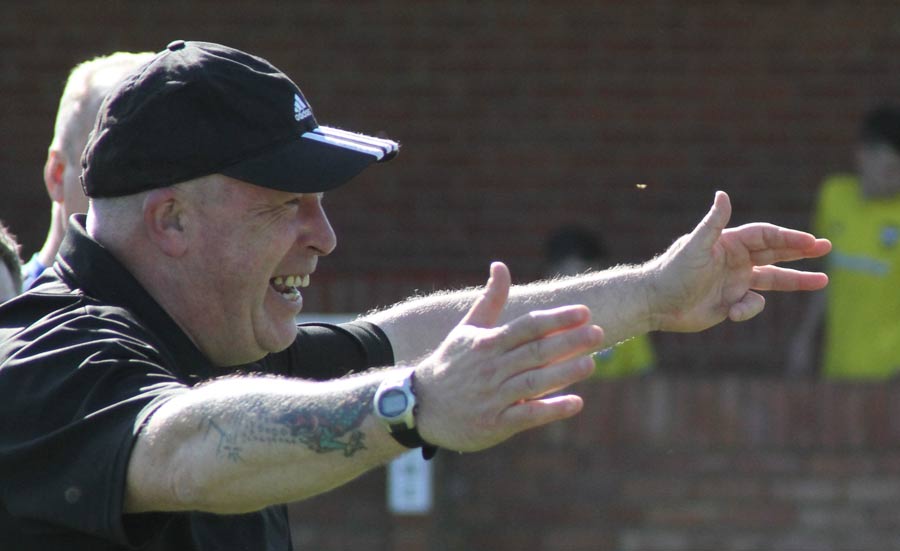 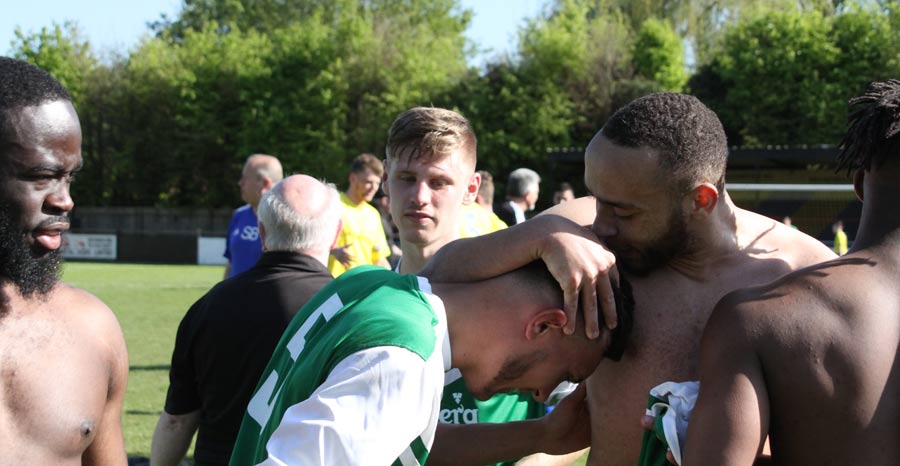 The kids are alright! 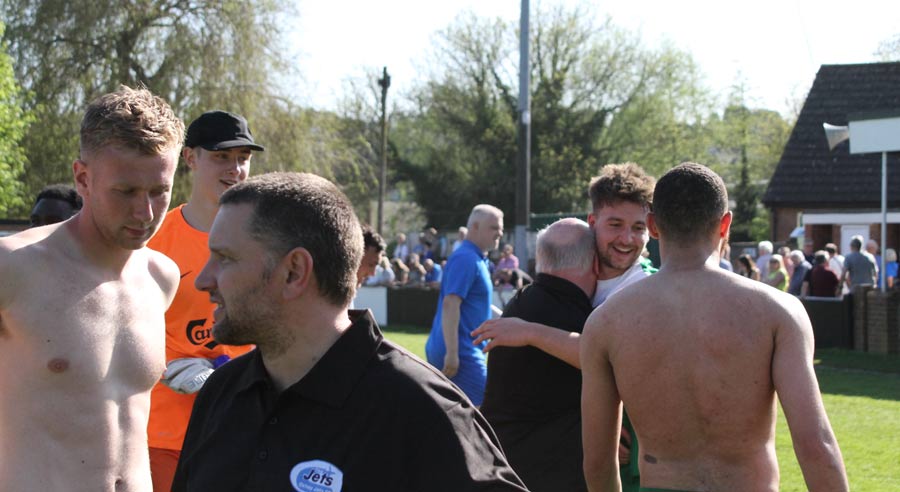 Four minutes of added time and finally the whistle and the celebrations. Had you not known the teams you would have thought that jets were promoted. Today pride was restored, the team gave all and they presented Tim with some thinking as he rebuilds the Jets team that has been in free fall since Xmas. Now they have shown that with the right motivation and commitment they can and did live with one of the best in the league.

Congratulations to Berko. Their achievement to step 4 is fantastic, and they deserved the medals they were presented with post-match. Every Jets player stayed to applaud them. Hopefully, this result means there is a one-step gap between us in the new season, where defeat would have meant two !!

An individual Man of the match was impossible to give, so many had given their all. The crowd said young Vass but to be fair Jets had players who could hardly walk afterwards, so drained having done everything for the club. Tim O’Sullivan had the last word on the subject; the award was to the team, they have brought Jets back to life and made us smile again. Now the uncomfortable wait on other results but they know that the bolt on no reprieve bottom spot is not having our name on it.

Well, it has been a testing season, not much pleasure after October but thanks to all the staff and players we are here to start again. A big thank you to Tim for stepping in and providing the lift, and I must say how nice it was that the first text Tim got congratulating him on the result was from former manager Lee Stedman, a class gesture that.

Thank you everyone; players, supporters, staff and those all-important backroom workers that keep the club working every day not just the 90 min match play. 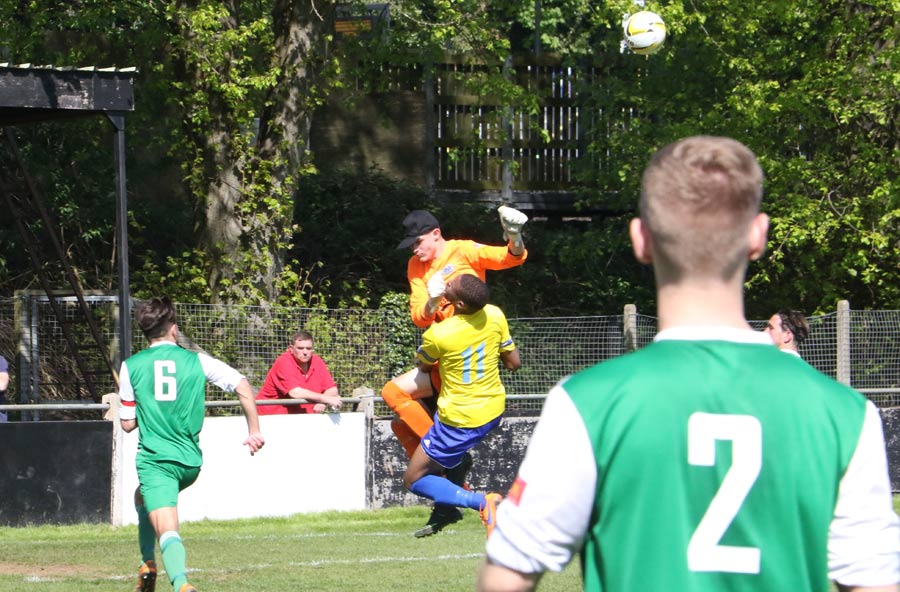 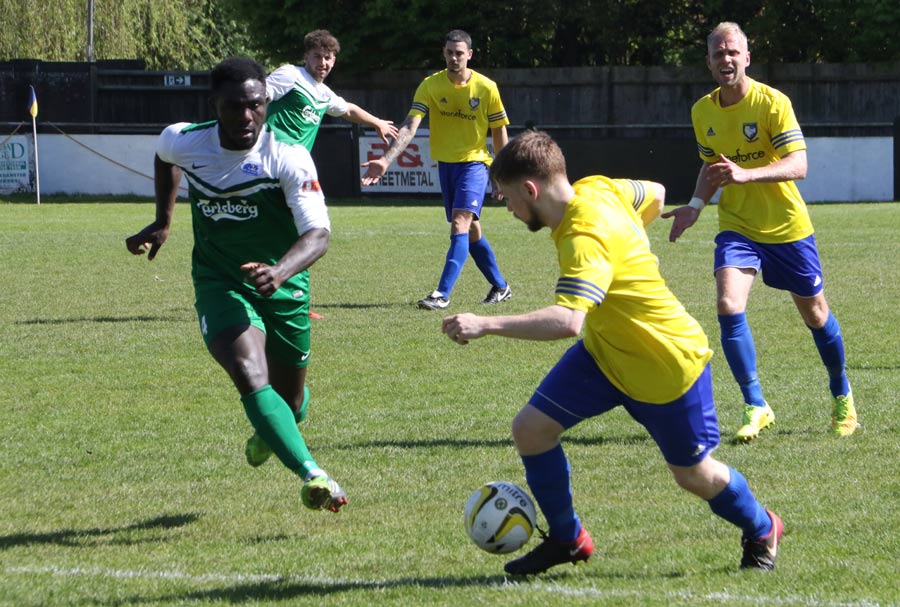 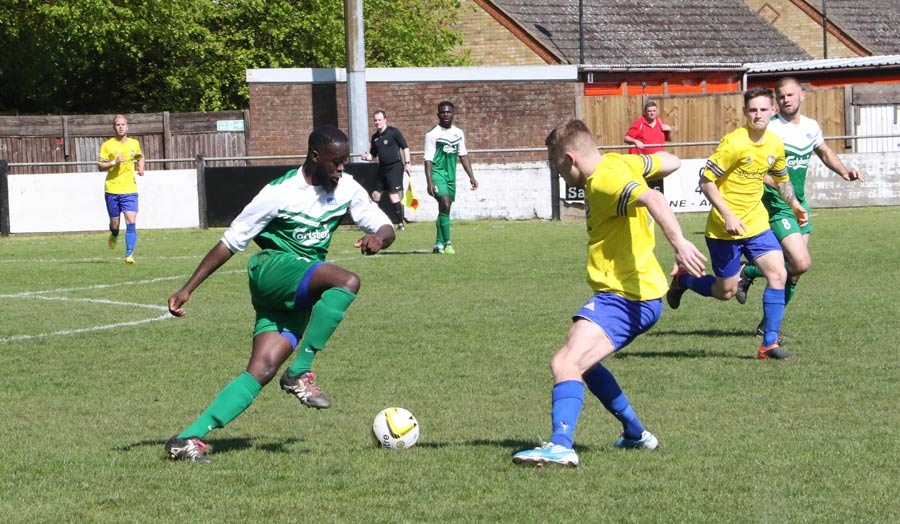