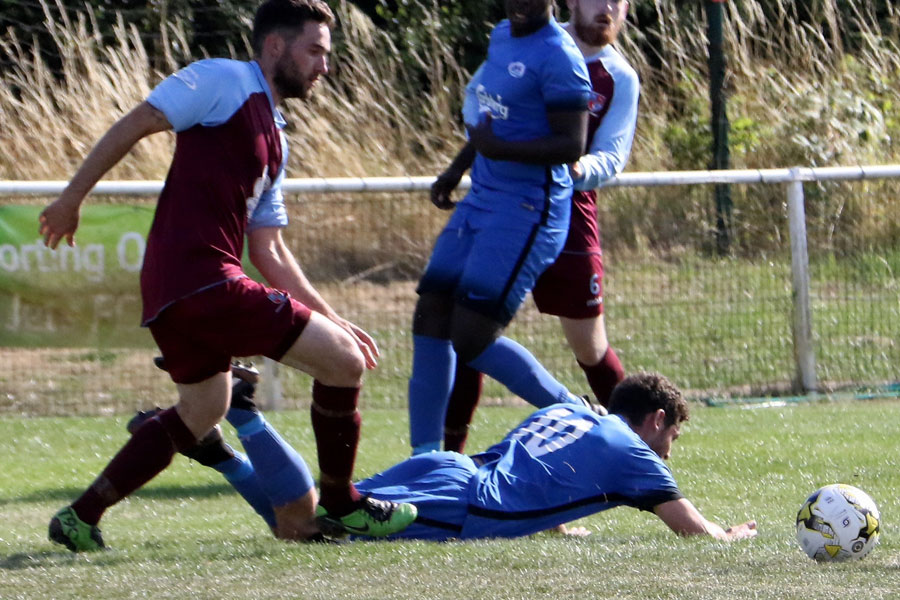 Jets battle and fought back from two down in a display of determination but defensive lapses cost them dearly, and manager Tim O’Sullivan was bitterly disappointed that the winner was a carbon copy of the second goal that was adequately discussed at halftime to avoid a repeat. 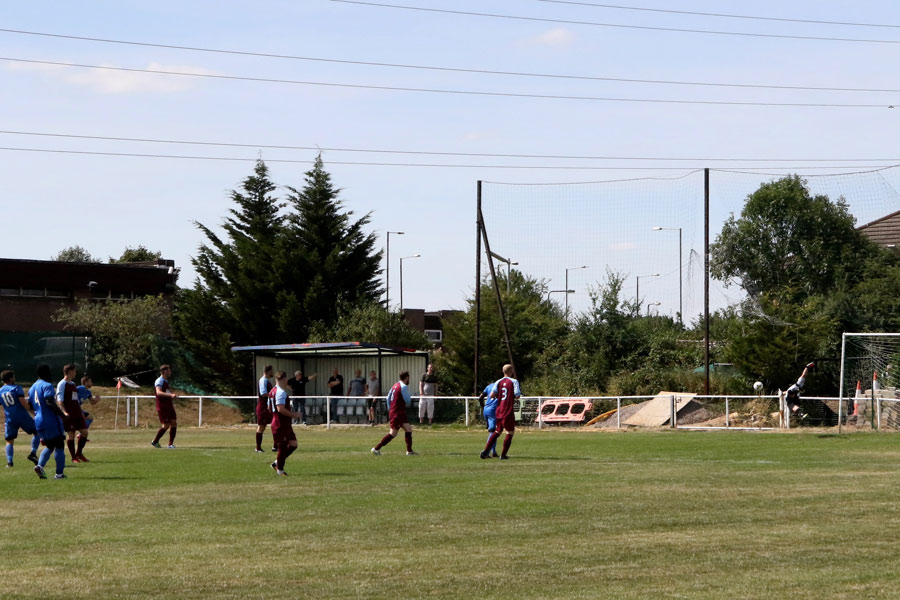 The game was even, both sides doing battle in the soaring temps in a nose to nose battle, both sides having chances as Nick Kerley just tweaked the outside of the goal with a long-range shot, and the visitors missed a sitter with a header. It feels like the officials save the controversial decisions for competitive games as after a quiet preseason, like buses they all come along together. 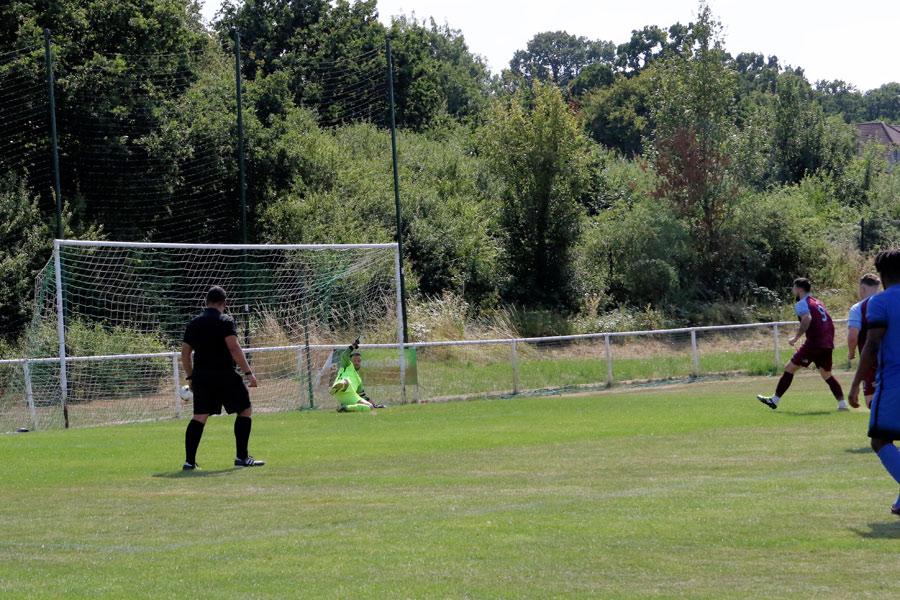 Green take the lead from a hotly disputed penalty

Jets fell behind on 27 minutes from a hotly disputed penalty which Danny Watson converted. From the dugout side, everybody including the away bench saw it as backing into the Jets centre-half and were amazed and angry at the decision. ( I say the dugout side as in fairness to the official the stand side including Jets people said it looked like a shirt tug by the defender, soft but a tug !!). 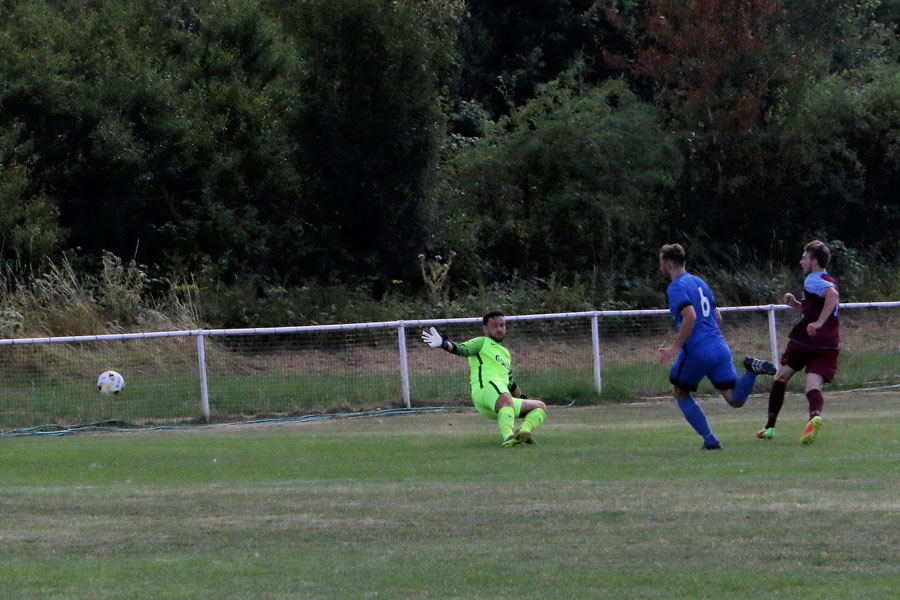 Jets in trouble, going down 2-0 on the break.

Jets attacked and looked dangerous, then suicide as deep in the Green half a sloppy pass caught Jets upfield and a single 60yd cross pitch long ball found Lobjoit who converted after excellent control and slotted home.

Nick Kerley pulls one back from Chris Killer’s corner. 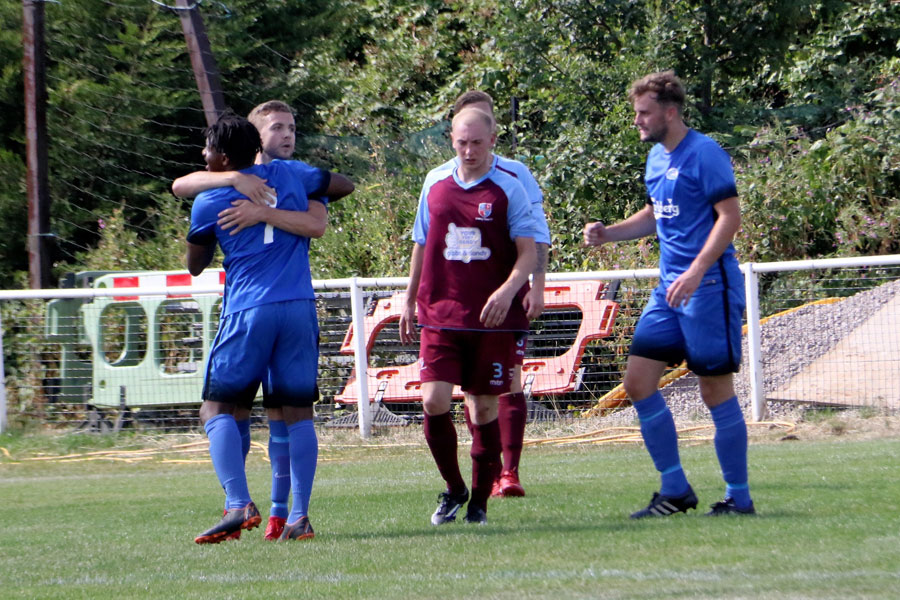 Jets in desperate trouble, would they fold. Chris Killer called into the side following the charity shield match hit a perfect corner that Nick Kerley met in the air to shoot home 1-2 (33 min). The excellent game by both sides see-sawed, and Jets GK Matt Evens saved excellently on a 1:1 from Watson. Then another header back post ball was missed by the visitors. Jets attacked were wilting on the wings before delivery. HT 1-2 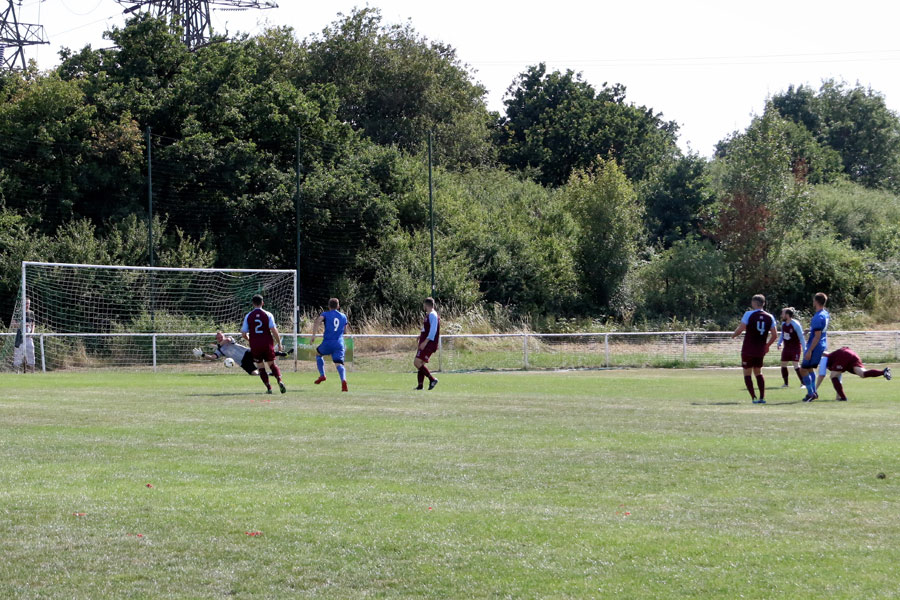 Kerley reacts quickly and slots past the Crawley keeper

Jets came straight out the blocks. Andy Brennan was lost to injury always a blow as his energy is inspirational. Ryan O’Sullivan attacked out wide and slipped the perfect ball to Brennan replacement Luke Jones, whose long shot was saved but not held by the visitor’s keeper, and Nick Kerley was on hand to stab home the rebound reacting first. 2-2 (47 min) 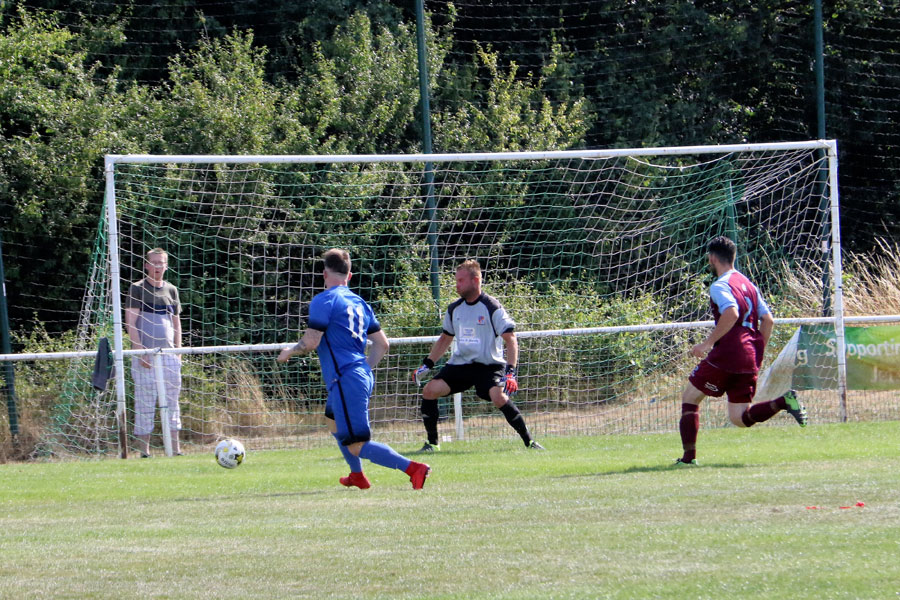 Jets had a massive chance to take the lead as Ryan O’Sullivan broke completely clear and with the keeper wrong-footed and just watching O’Sullivan placed the ball square on the post and out again(53 min).

The match was now in Jets best period, and they must have been looking at the win. Then disaster as Jets right up near the Crawley penalty area cheaply laid the ball to the defender and bang, a straight low and upright diagonal ball found Nimi, who stripped off the defender caught wrong sided and with the keeper staying at home slotted into the corner low for the winner.

Jets pushed, Crawley almost killed it off but was denied by an Evans point-blank save then injury time drama. The last throw of the dice and Leigh Stevens upended inside the box, and yet again both sides agreed on a pen, literally everyone home and away said it, Crawley supporters even tweeted it, but, yes another BUT the referee gave it outside, and the resulting kick came to nothing and Jets were beaten. 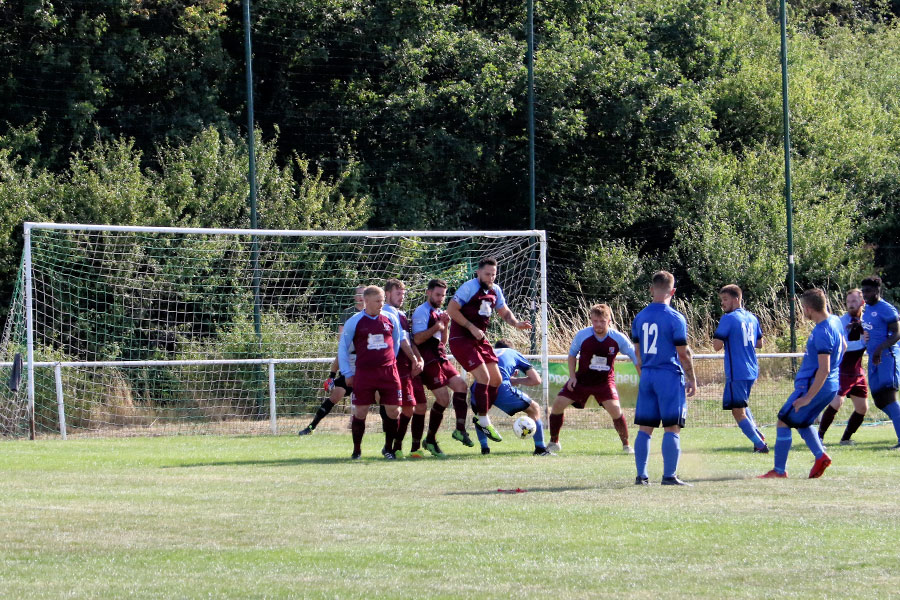 Nothing from the free-kick and Jets frustrated.

Three points lost to us, and essential promotion marks lost for the official since the changes this season say mark a section for significant decisions separately !! 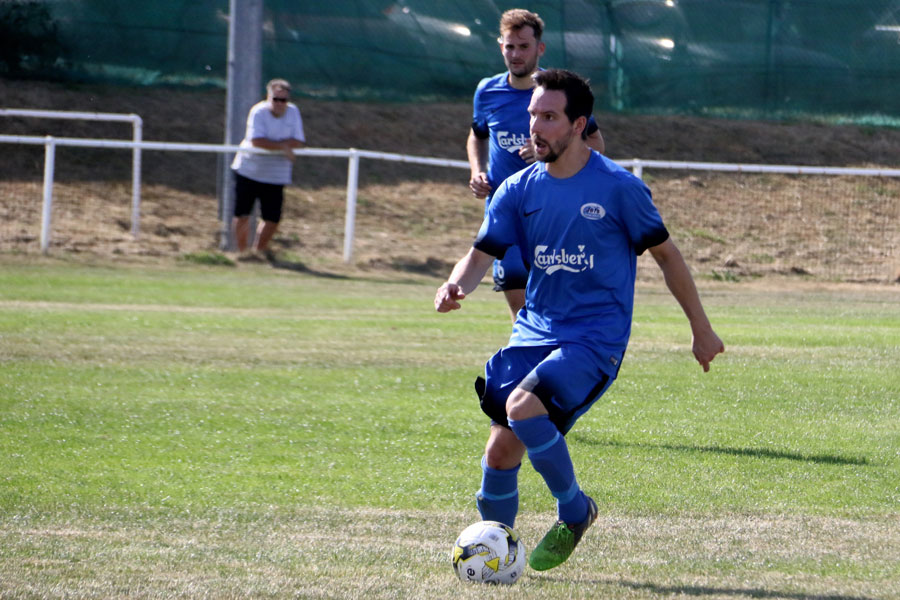 Jets were excellent at times, definitely a breath of fresh air from last season’s efforts, but its work in progress and the new side has people missing and understandings to develop, but also the lessons must be learned and mistakes not repeated.

This season our excellent sponsors will be giving a bottle to the man of the match and special event tickets at random to players earning them, so decisions need to made for each game.

Today Leigh Stevens and Chris Killer were nominated as was two-goal Nick Kerley who played excellently and a constant threat. The final nod went to Degi, who battled and ran and battled some more. High energy when jets needed it most.

Oxhey Jets video strengthens the view that the foul on Stephens was inside the area. The ball had been played back to Kerley but Stephens was then taken out. 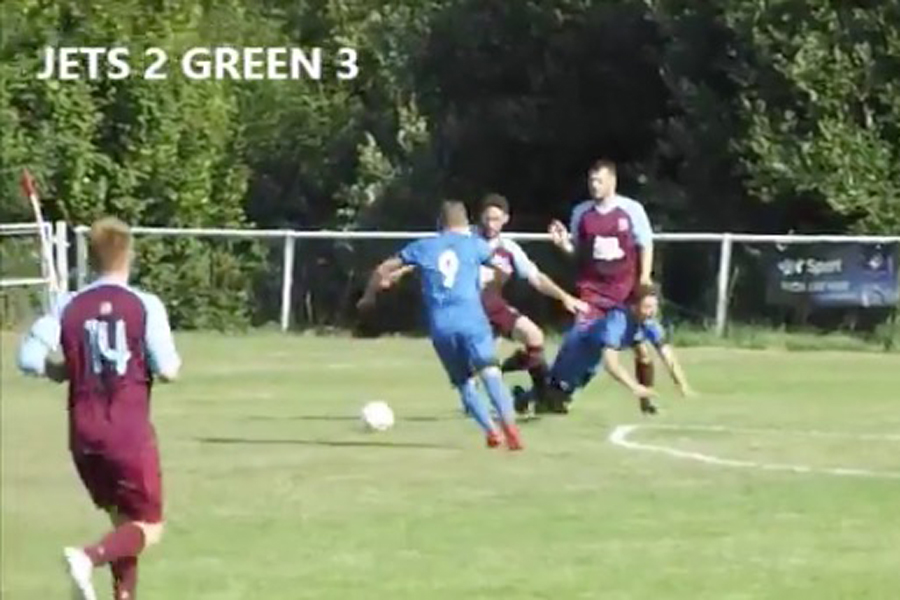