A Game Of Two Flags

Jets will honestly wonder how they lost and came home empty handed from the trip to league leaders and red-hot championship favourites Welwyn Garden City.

On an atrocious pitch that got ruined in the rain-drenched afternoon (no criticisms of match ref on inspections here, the home side wanted it played) the two teams battled out a nose to nose encounter that showed no reflection of the vast difference in league points and positions.

Lee Stedman shuffled with the frequent pullouts, but this time the growing squad gave good reason to think long and hard about recalls as they were outstanding on the day. Trying not to be biased here but we should have come home with more than a pat on the back. 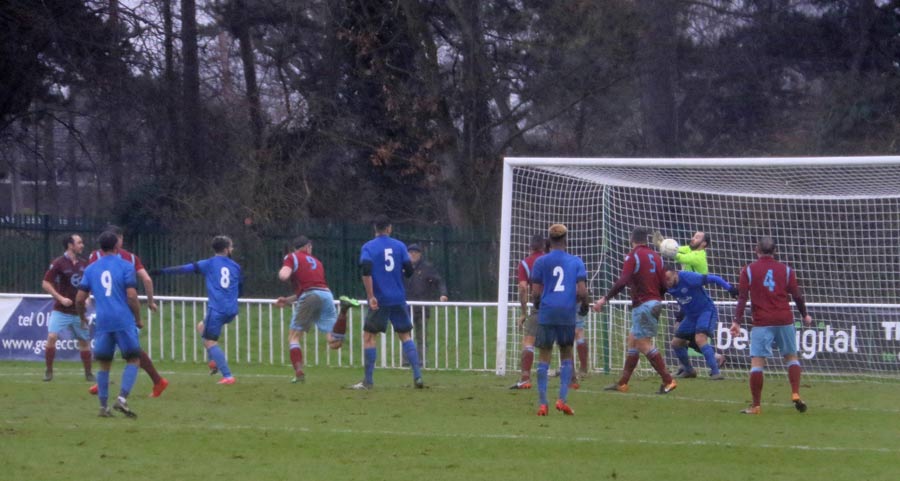 Jets denied an opening goal by a late offside flag – Welwyn still had a man on the line from the corner!

Jets showed their intent early on and looked like they had the lead when Chris Blunden slotted past the keeper, but the post denied him. Then they did think they had it when Petru headed home a Seymour corner and, with the ref pointing to the centre, a late and genuinely dreadful beyond belief flag following a lengthy discussion saw it ruled out for offside. That was despite a man on the post AND the keeper being there as the photos show. Not even a single home team appeal, even WGC manager Adam Fisher admitted on Twitter that it was “a ridiculous decision, and impossible for him to be offside” !!

While Jets continued to be rattled by the decision, they went behind when the surface seemed to beat Keeley in Jets goal as he slid past the low pass from Bond and Kersey easily tapped home 1-0 (32 mins).

Eli is taken down for Jets penalty.

WGC then had the ball in the net again, but it was ruled out for a foul on John Smith. Then Jets got their rewards when a quick break led to Seymour being brought down in the penalty area, and John Smith slotted the pen. 1-1 (45 mins)

The second half was a battle. It could be nothing else with the pitch now in tatters. Jets were making the chances, Eli Seymour blazed a sitter high over, and when the keeper was caught out by the corner flag, John Smith went for broke from just inside the half with a first timer but regretfully for us wide of the target.

John Smith battles through on what became a terrible surface

The Home keeper twice denied Blunden with good saves, then disaster as young Vass Mandeville brought down the on goal striker and earned a yellow. But Ryan Keeley saved from Clements (79 mins) and Jets were back on it. 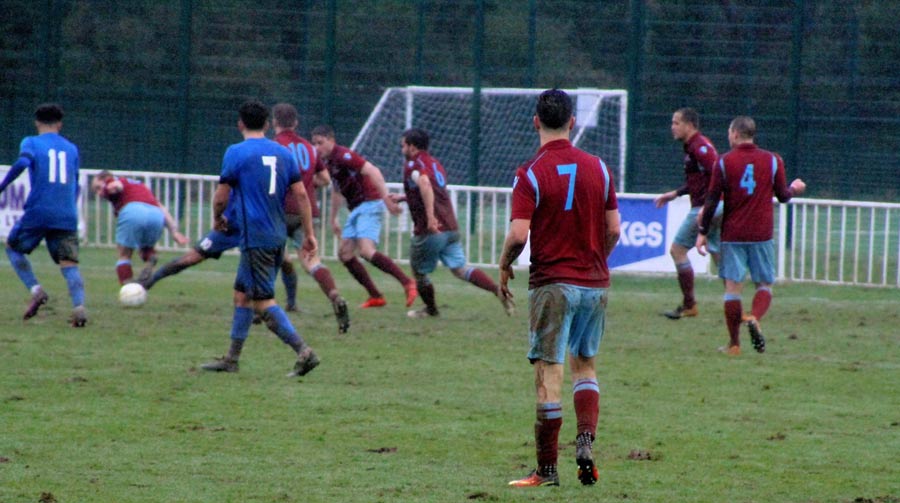 Jets, if anything, got braver and went for the winner. Then a massive dispute and again the same assistant as the home side got the lead through Ironton as the whole Jets line waited for offside.

Jets were rattled with the official, who I must say was very influential in today’s result, and attempted to salvage a point by pushing forward. It looked like they had it when a Blunden free-kick dropped to Curtis Donaldson but it was agonisingly on the tip of the toe and just edged to the keeper. WGC broke and killed the match (95 mins), the sign of champions really, ride the storm and apply the killer touch.

The killer touch – Welwyn get their 3rd goal.

Jets effort was excellent today, and no criticism can be aimed at anyone for energy or attitude in dreadful conditions, but there was a lesson to be learned, take your chances or pay the price in defeat.

The hosts are robust and competitive all over, and I’m sure they will have the promotion and championship trophy in April. For us, the fight for safety continues with much heart drawn from this performance.

Jets Man of the Match was done by watching reserve skipper Scott Pugsley, and it was shared between young Vass Mandeville and keeper Ryan Keeley.

Eli sends one over the bar 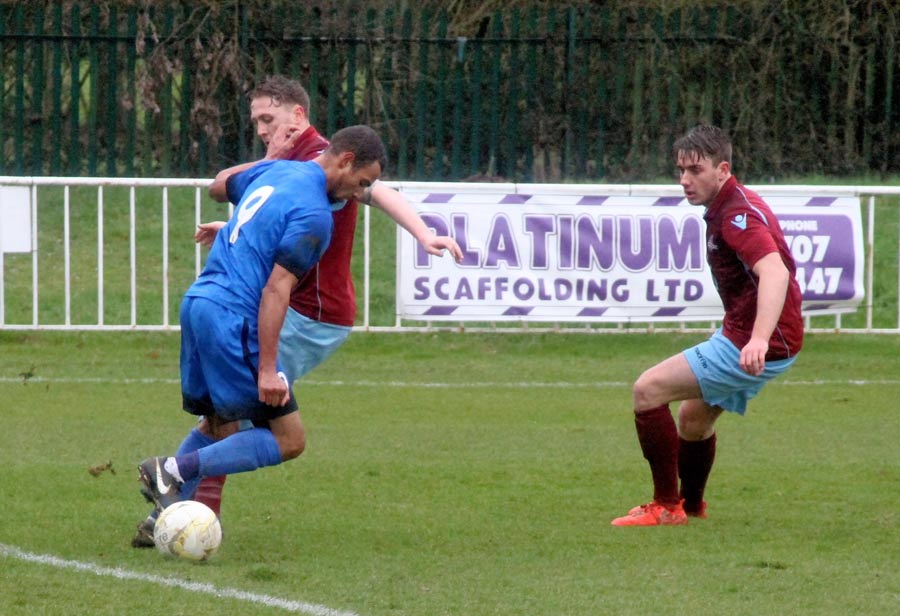 Lots of good coverage for our Reserve sponsors Platinum Scaffolding