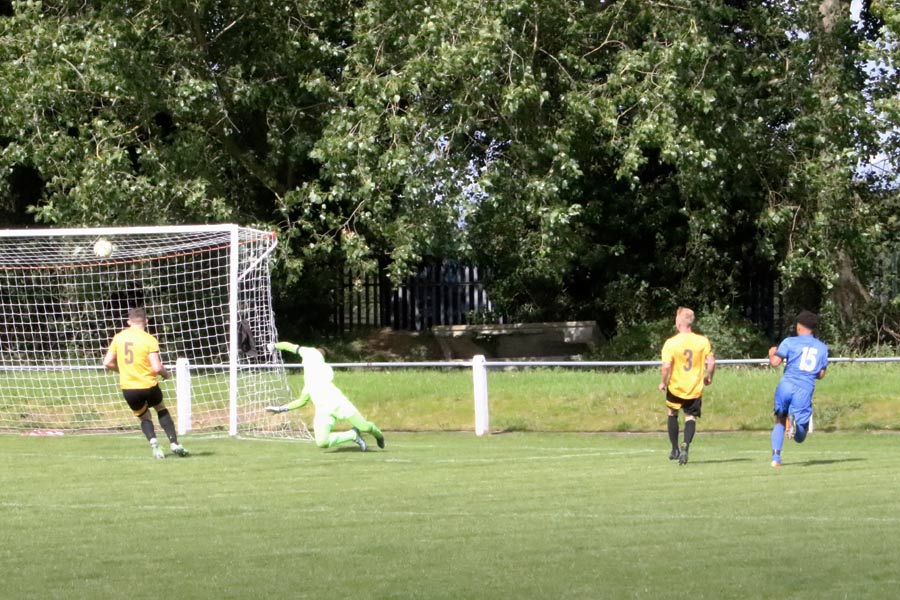 Back on the road and all change again for Jets as the dreaded festivals, holidays, weddings, injuries and, well, just not available had their effect.We also had the start of the Reserves league.

But Jets are finding committed youngsters and the performances are reaping rewards. With four teen debuts and keeper Rob Partington incredibly the “father of the house” at just 24yrs old, Jets earned a 1-2 win away at Stotfold.

In a frantic attacking display by both sides, two or three apiece would not have been a surprise after 15 minutes! 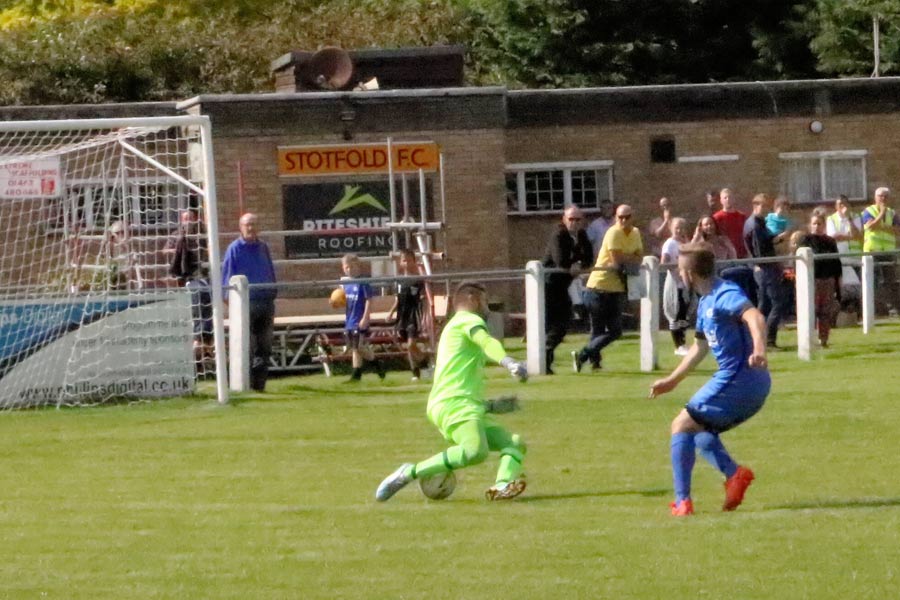 Nick Kerley, Jets early leading goalscorer was three times denied by superb saves by the home keeper. A Stotfold defender also denied him. Kerley thought he’d thumped home a rebound only for an excellent block by a defender to deny. 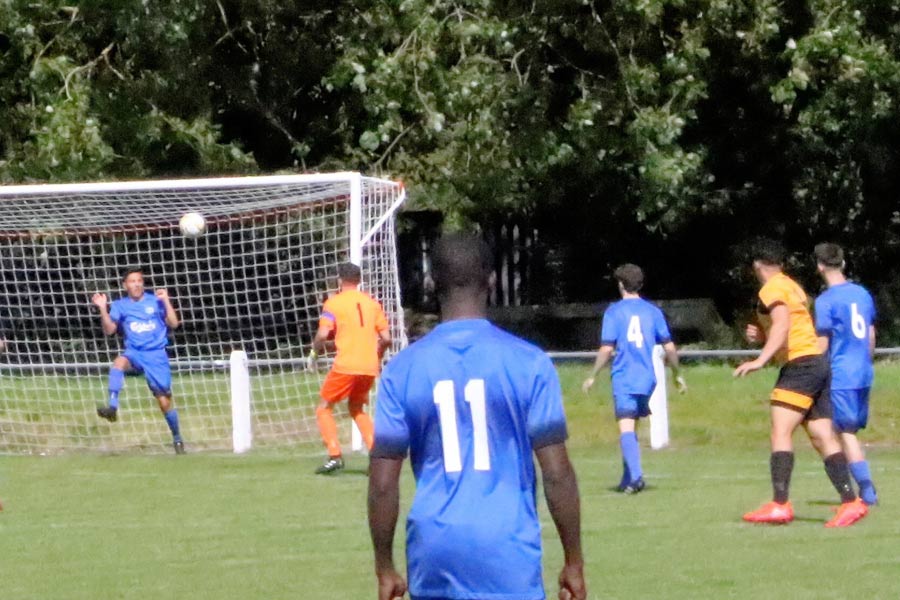 Brilliant off the line clearance by Vass

It wasn’t one way. Rob Partington pulled one out the bag and the rebound fell kindly for an excellent lob over his head into the net, but right on the line young Vass Mandeville looked like a seasoned centre half heading clear under pressure.

Jets played some superb touch football and one move put Matteo Esposito in clear on the keeper. Taking time, the midfielder played the ball around the keeper but just wide of the post. Jets were wondering if it was going to be one of those days. 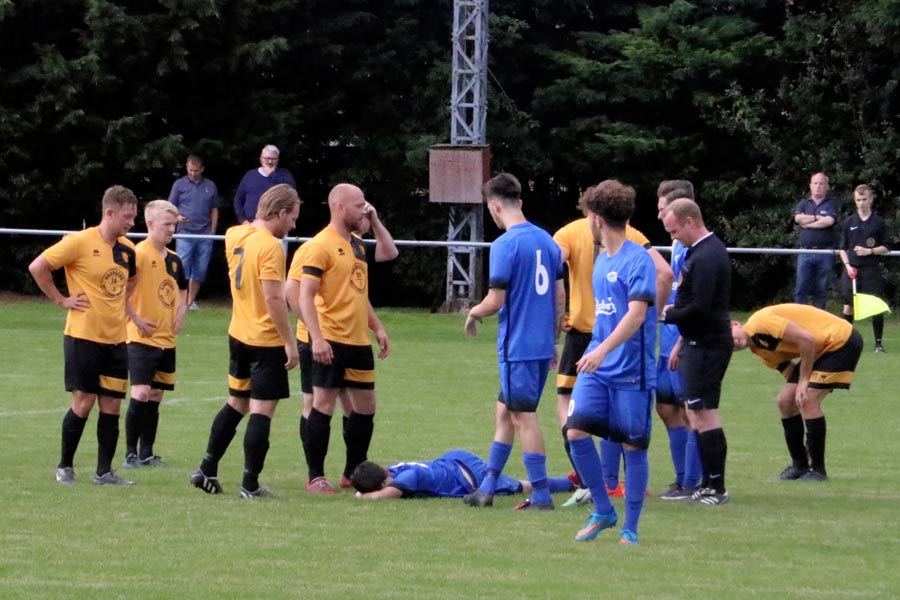 End of the match for Joe Patrick

Jets lost another young debutant, Joe Patrick, after a very heavy challenge left him badly limping and bleeding. It earned the home side the first of the day’s yellow cards.

Jets were making chances and Nick Kerley was linking with another debutant. Antoine Akinola. whose speed was terrorising the Stotfold full-back. Half time 0-0.

Just 5 mins into the second period, now with the wind with Jets, they opened the scoring with a stunning goal from the Cayman Islands u20 international Elijah Seymour. He was played through out wide by Antoine and the youngster, on his debut, smashed home a high net bulger from a tight angle. 0-1 (50 mins). 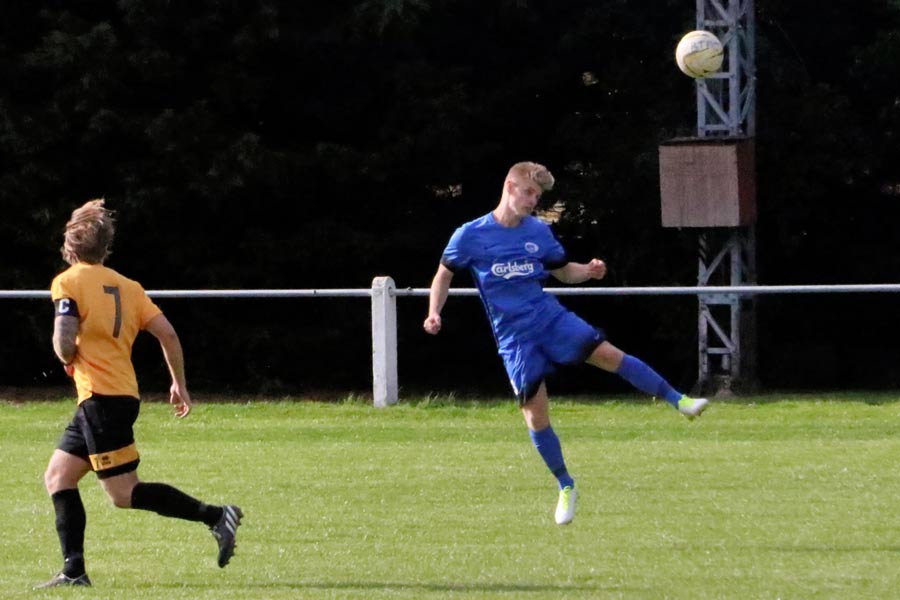 Harry Beaumont with another clearance 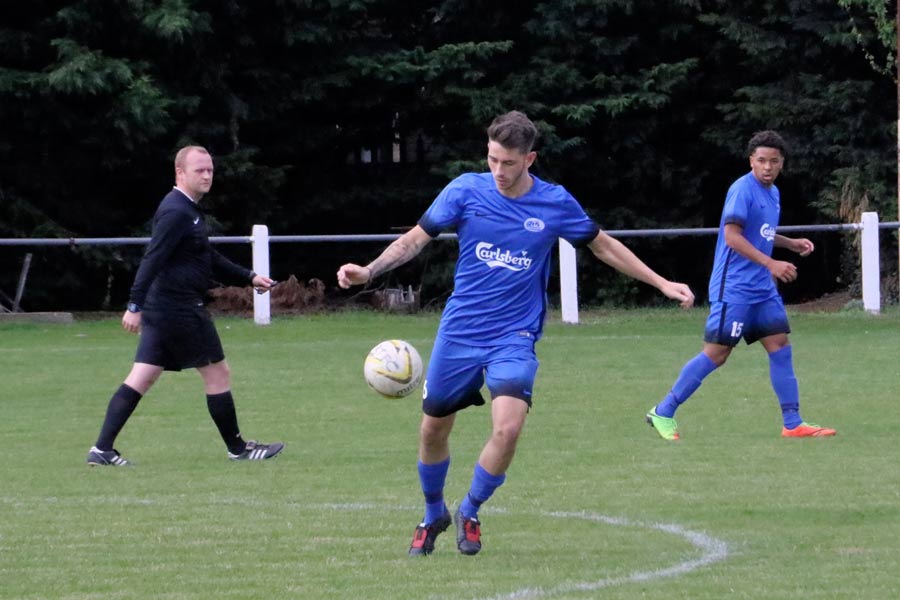 Stotfold has some classy youngsters too and had Jets under pressure for long periods. Jets had to defend well and there was no room for mistakes from Jets young centre-backs. It was important that Jets full-backs, Harry Beaumont and Dan Taylor, cut out the supplies well despite having some good opponents to deal with. 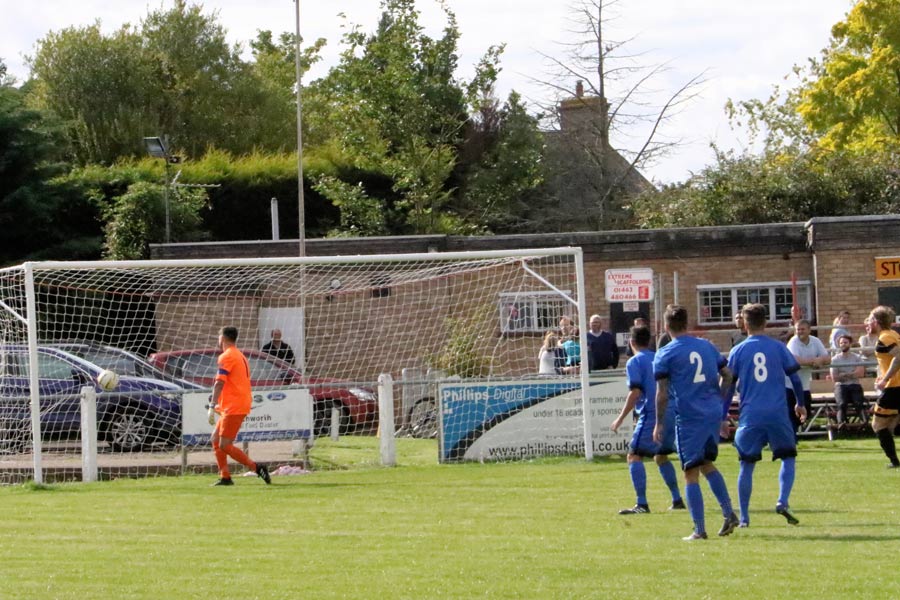 Stotfold equalised with a stunning curling lob. After some good defending and saves, the rebound fell kindly for Stotfold, the finish was pure class.

Jets had to dig deep now and it was Stotfold’s best periods. It got touchy with two more yellows each and a couple of flare ups. Jets broke forward, Elijah hit a pinpoint low cross to poacher Nick Kerley who stabbed home for the winner. (77 mins 1-2). 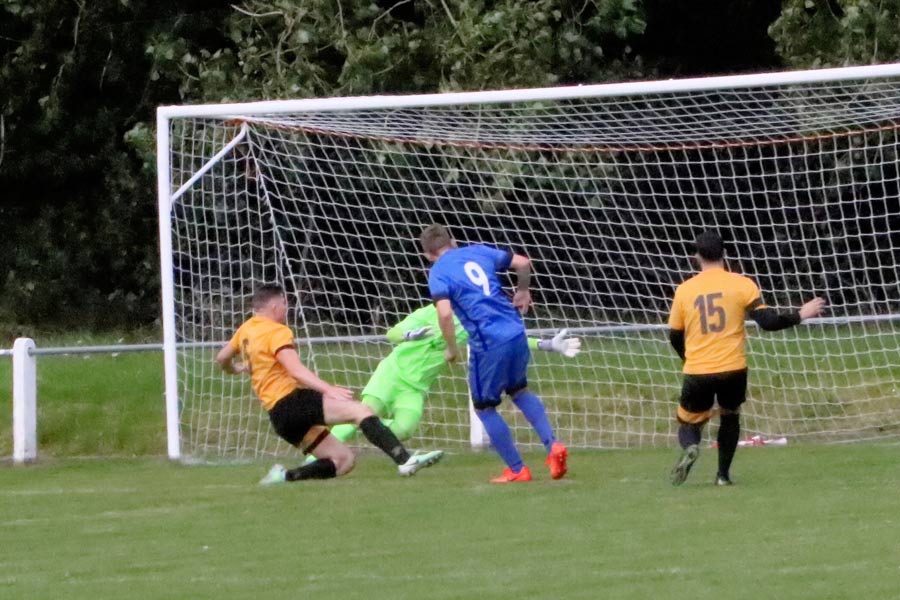 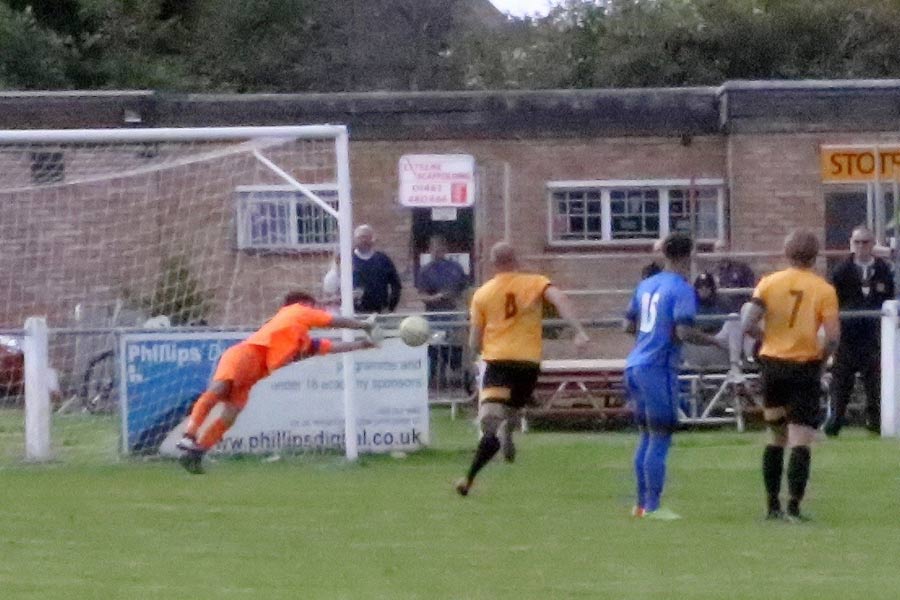 Brilliant save from Rob Partington as Stotfold piled on the pressure

Stotfold worked hard for the equaliser. Rob Partington made the save of the half, if not the match. At the other end the home keeper again somehow denied Kerley with a reflex save.

The whistle finally arrived and it was Jets celebrating the win and a three out of three start in the league. 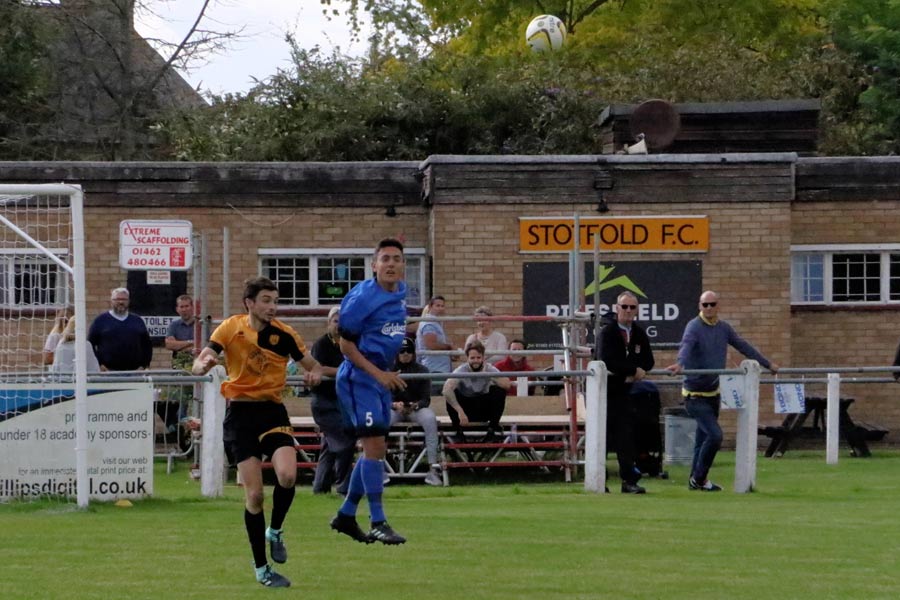 Another MOM performance from Vass

The Carlsberg Jets man of the match was discussed long and hard and the final nod was again a split decision. It was shared between Vass Mandeville (two in three for Vass) and debutant Conor Ferguson. Both were outstanding in the centre-back roles, only slightly lost in the larger no 4 & no 5 kits made for let’s say more “filling” frames !! But on the pitch looking very much at home. 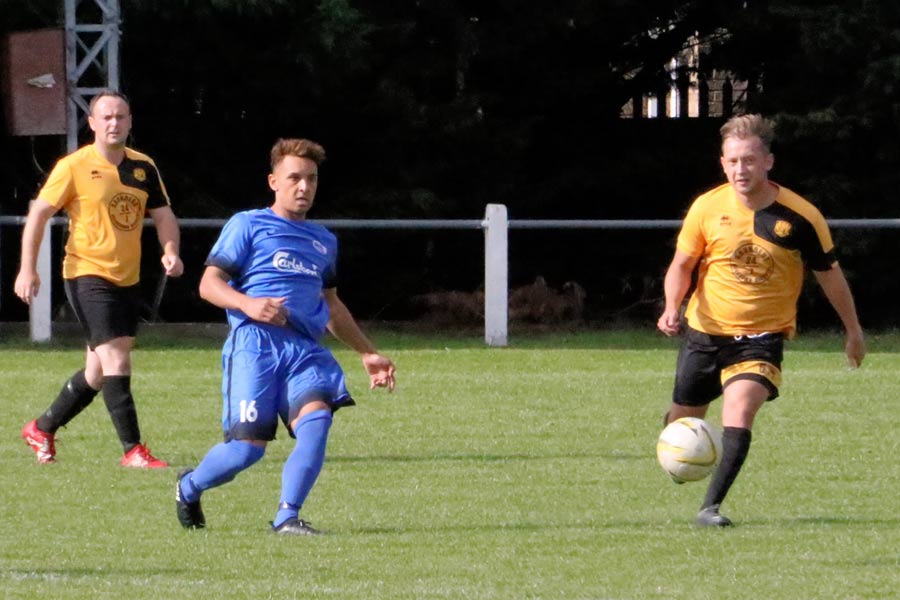 Josh Noyes did well on his return to Jets 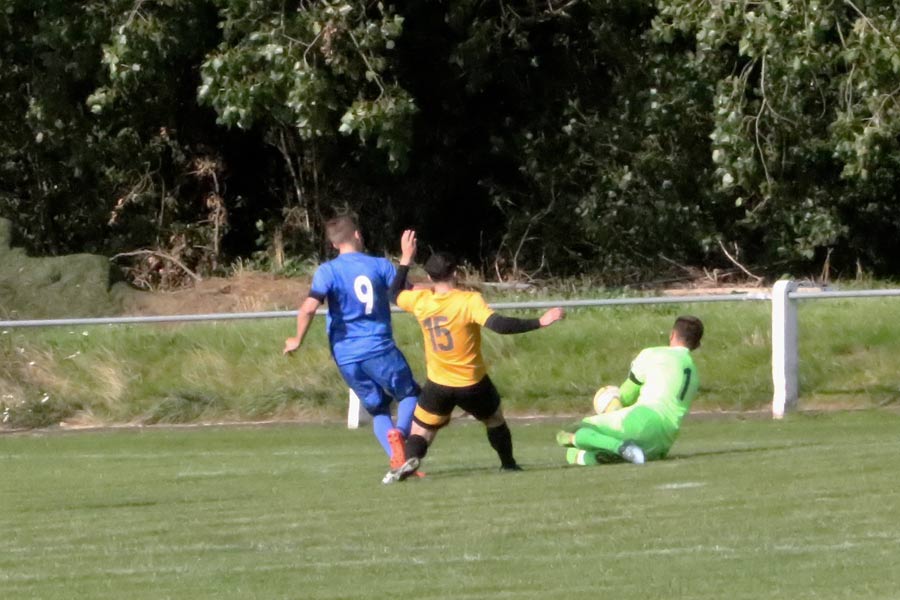 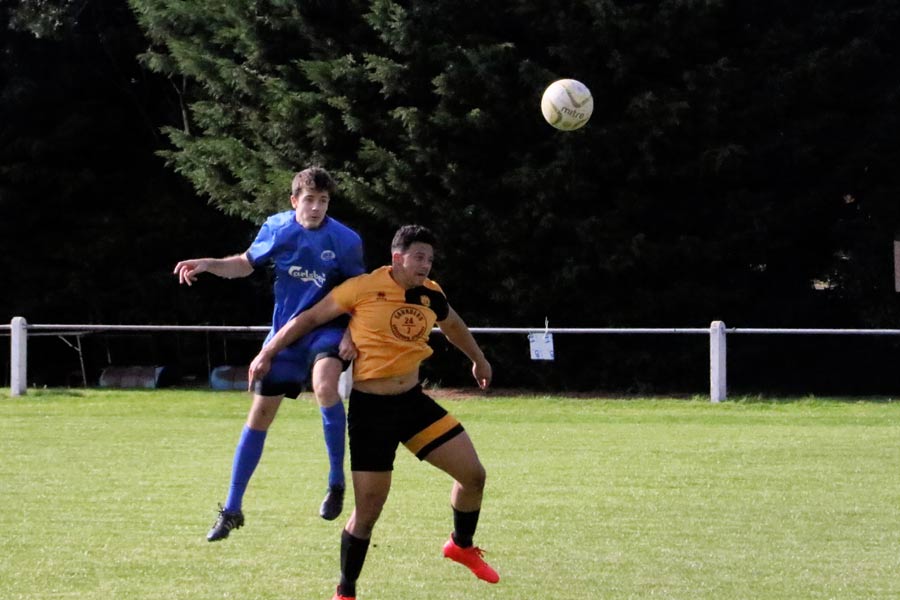 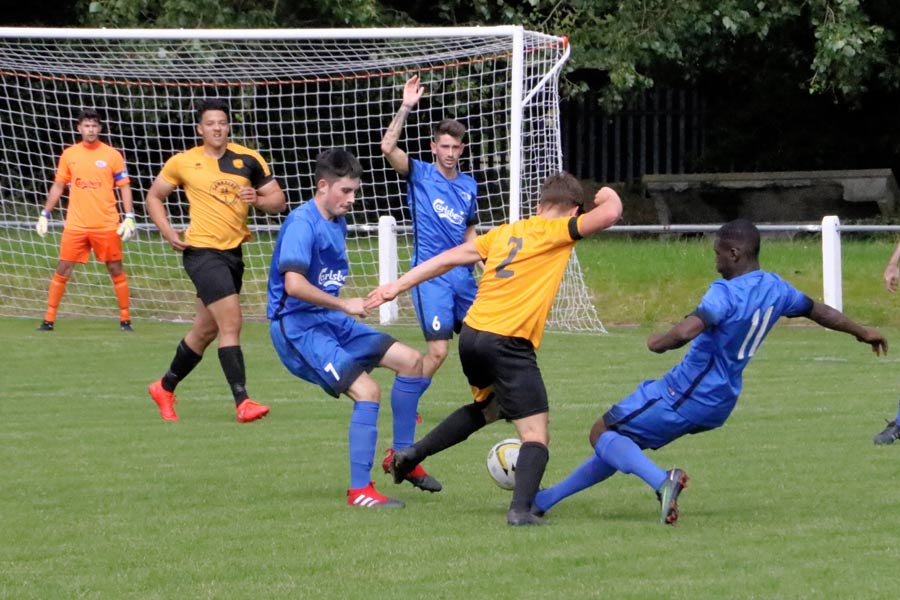 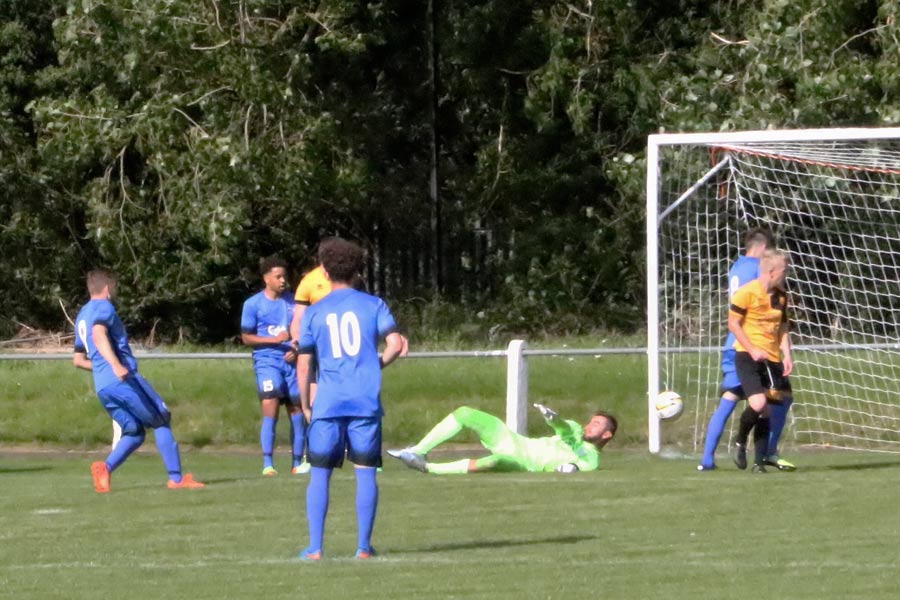 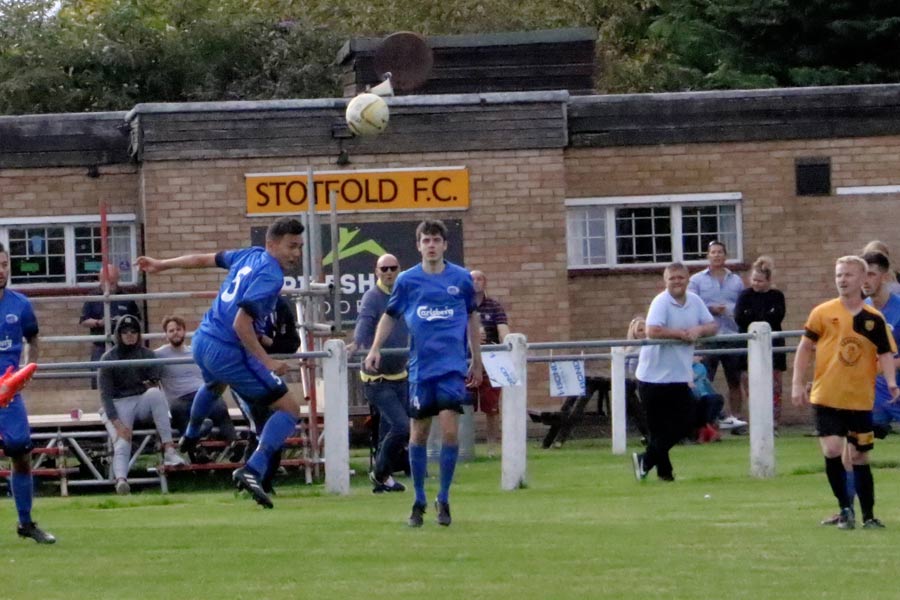 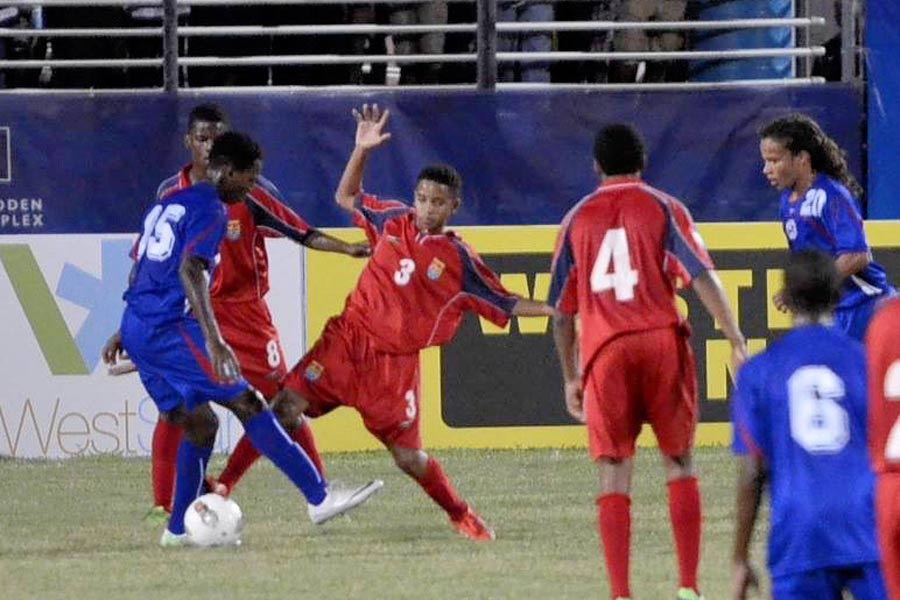 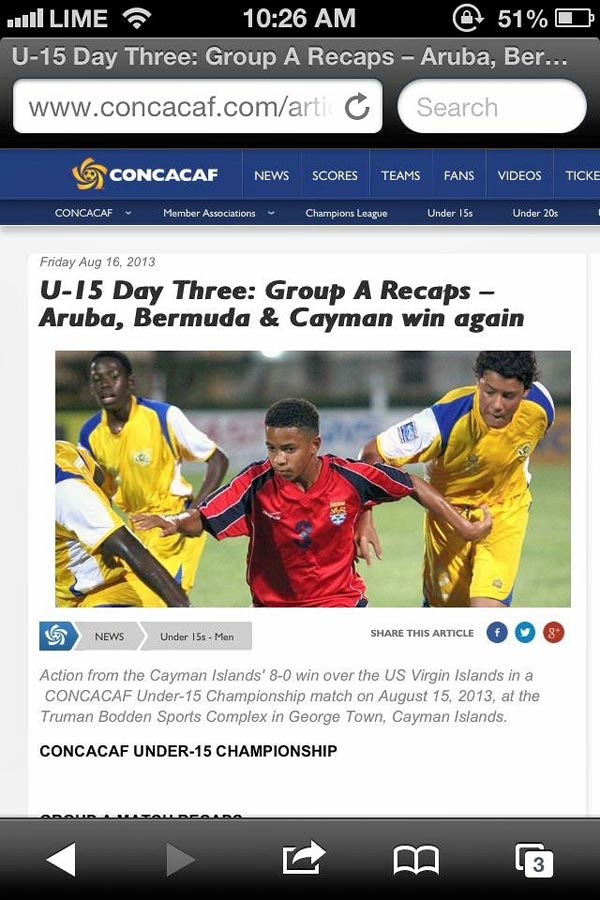