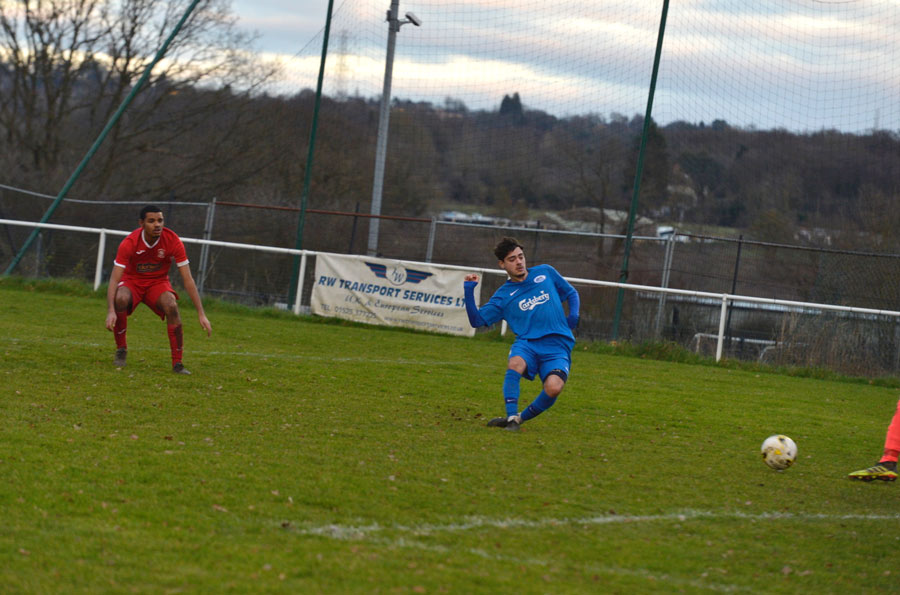 It was a Wembley double for Jets in the first game of the year at the Boundary stadium, not as dramatic as the match at Wembley when Jets had to come back from 3 down at the break, no keeper and two in the sin-bin but won 3-4.

Jets went on the assault from the off, and it was fast and furious stuff as the front line worked as a unit and options were high. The middle was more productive today, and Louis Bircham had his best match in a blue shirt since his return, and a superb curler read perfectly by Nick Kerley to slot 1-0 Jets (23 min) 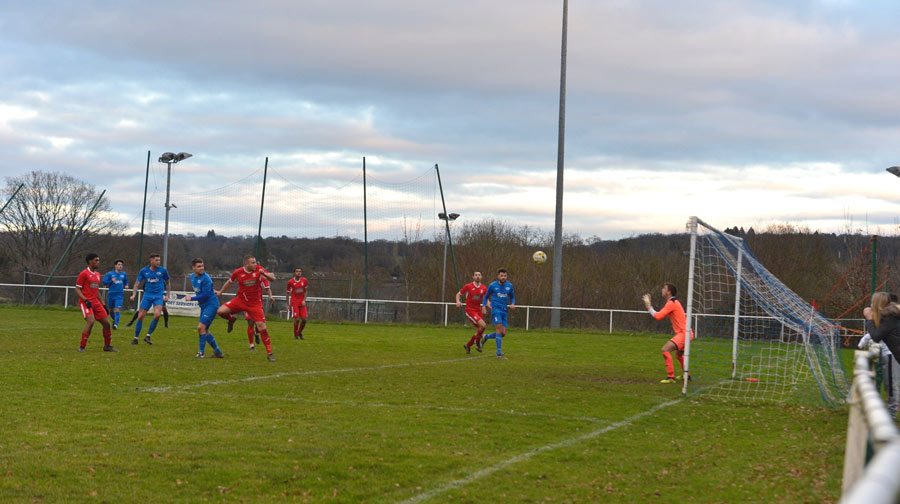 So close from Scott Bonner – inches over the bar

Jets kept the foot on the pedal, and it was almost two as a well-placed header by Scott Bonner went inches over the bar. 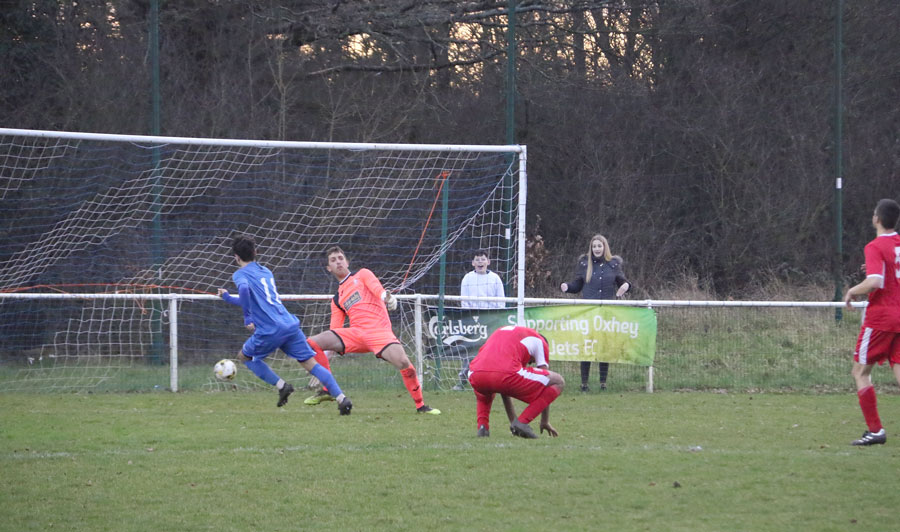 No mistake from Sean – great finish 2-0

The reprieve for Wembley was short-lived, and it was many happy returns for Sean Giordmaina to compose and slot on his return to his home club 2-0 (28min) 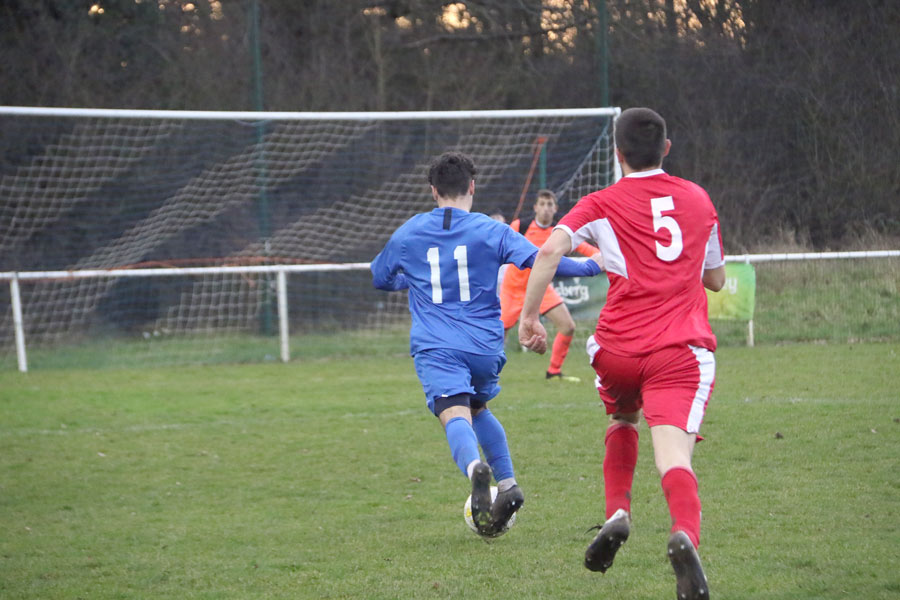 Sean robs the last defender and he’s away 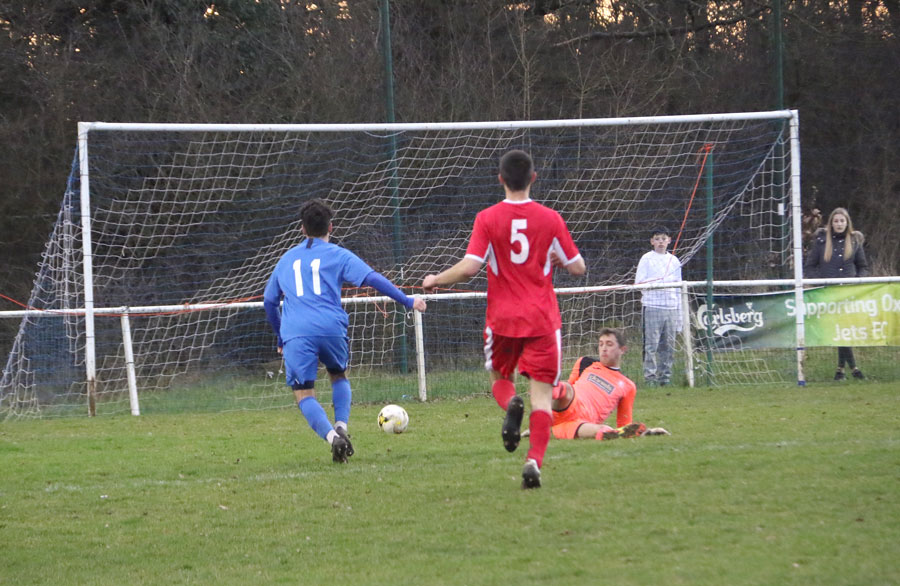 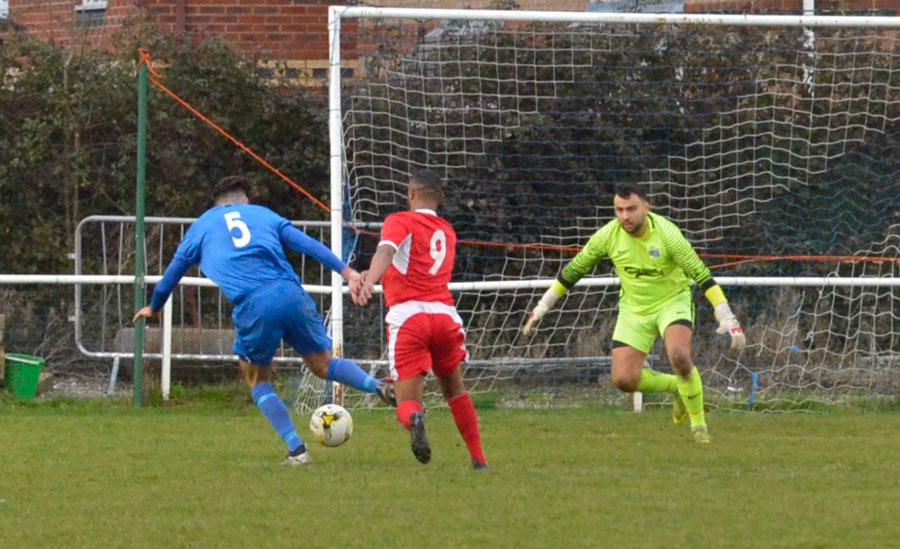 Very good game from Jude Bell (5) after a long journey back from Cornwall.

In between those goals, Jets had some defending to do and Jude Bell, who showed great commitment driving back from Cornwall for the match, kept Jets in command with some excellent interventions. 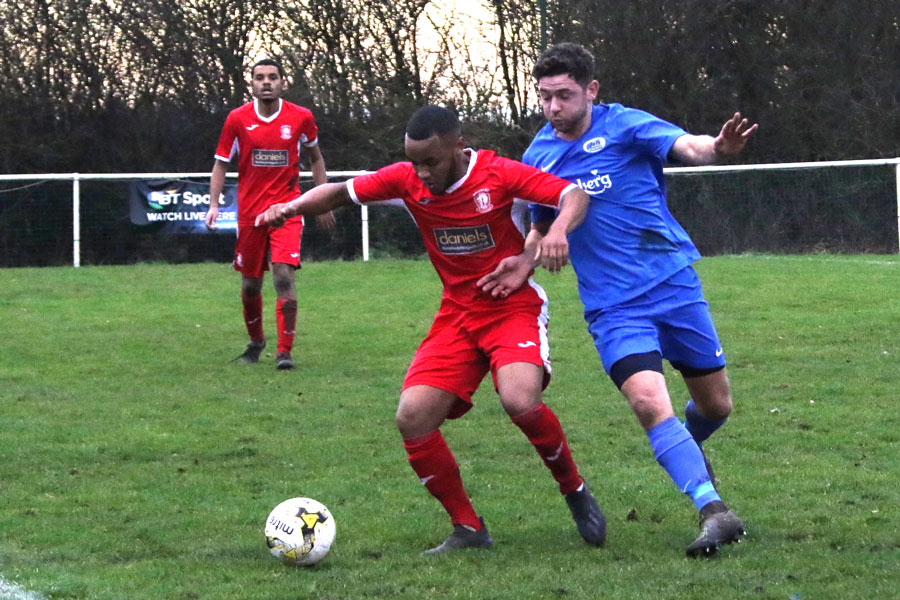 The running and work from the front three of Cameron, Kerley, Giordmaina, supported by the imagination of Stevens and Bircham was stunning at times. 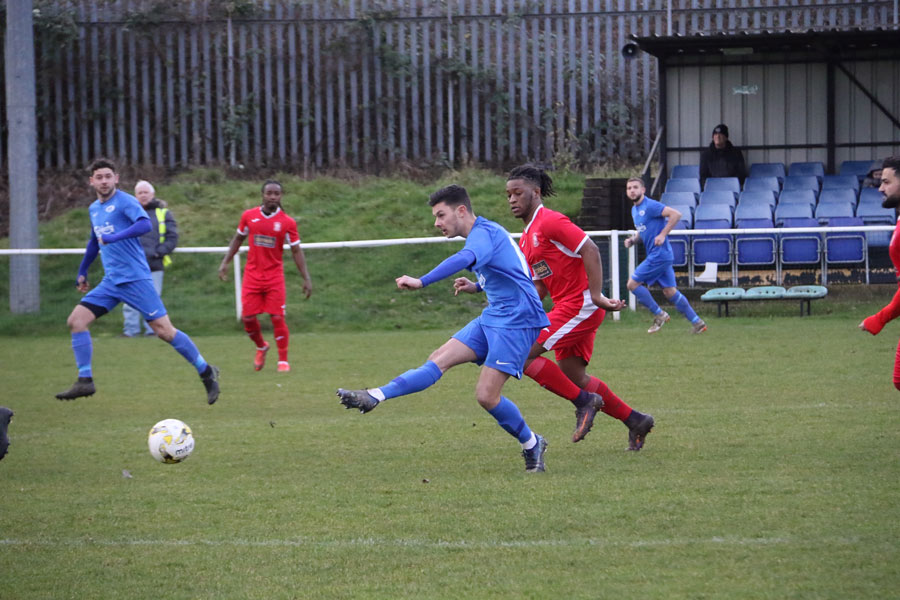 Louis Bircham – his best game for Jets since his return

The warning was clear from the manager, pats on back BUT another half to come and we were three down last time at the break. 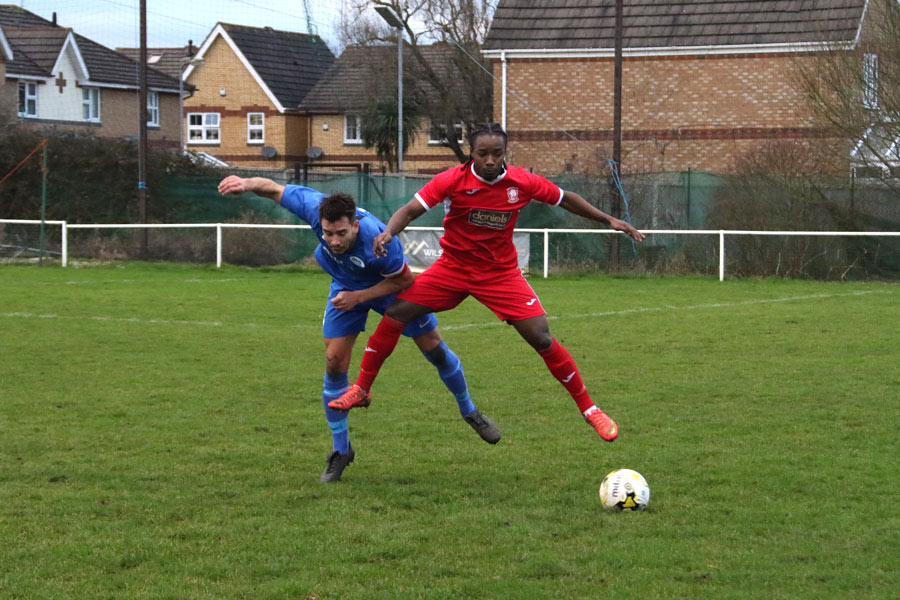 Tom Gibson – part of a strong 2nd half defensive line

The second period was not a dominant Jets. Wembley reorganised and became far more competitive. Jets went a little into their shell, and now the challenge fell on the harder boys. Speer, Gibson, Bonner, Lewis, Bell had the work to do and protected keeper Matt Evans superbly.

Wembley pushed hard and got a reward with a deserved goal with half an hour to go. 3-1 (60mins).

There was some short-lived aggro as a coming together saw Wembley reduced to ten men, but, despite that, Wembley was still doing the attacking. 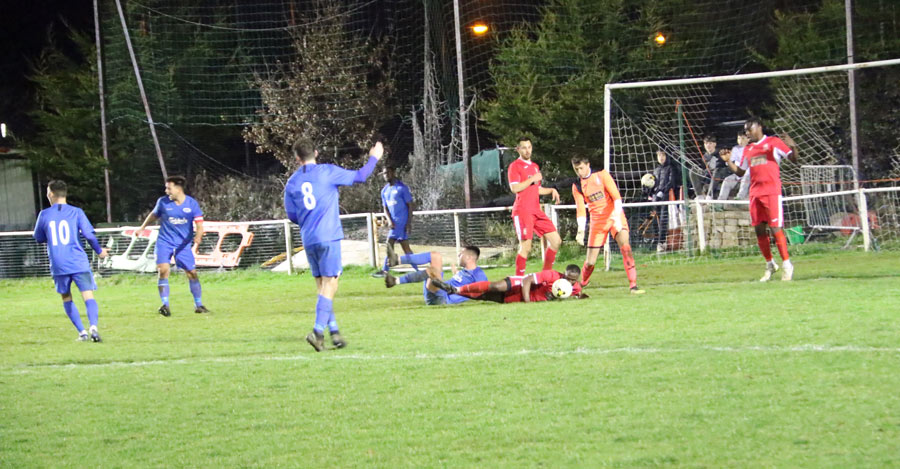 Massive penalty appeal when Reece was brought down, but nothing given

Jets held firm, and a double penalty appeal drew nothing as first Giordmaina seemed denied on the line by an arm, and Reece Cameron it seemed taken down, but nothing given. Wembley also had an appeal turned down at the other end as the referee was having none of it.

Giordmaina struck and ran at the last defender and was going clear when clinically taken down and surprisingly the Wembley defender only saw yellow, I can only guess as it was close to the centre line but a let-off for Wembley. 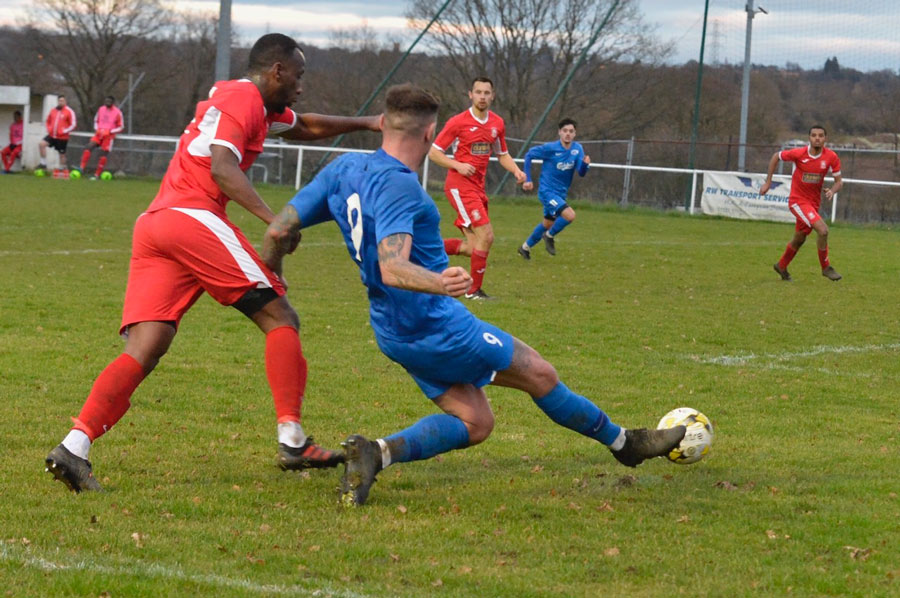 Reece worked hard as both target man and provider

Both sides attacked but as time ran out Wembley ran out of steam and Jets looked to have clinched it when Stevens, Cameron and Giordmaina all looked, shot and were denied with goal-line clearances.

Jets had to work hard to get the points in the Sponsors Brewers fare as Carlsberg edged out Budweiser 3-1 but after a dodgy spell before Xmas and a layoff Jets were delighted to get back going with a win. 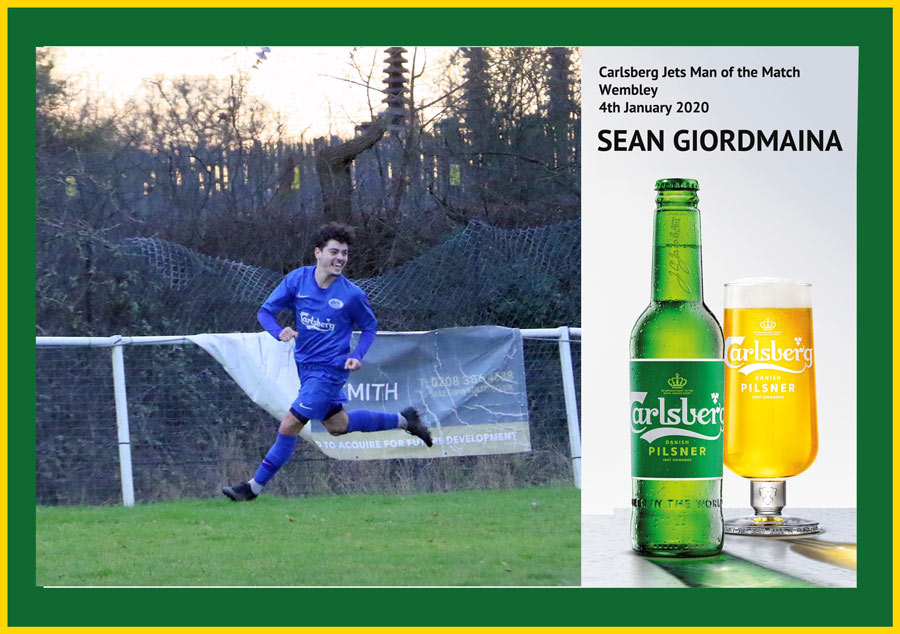 Boss Tim O’Sullivan picked the Carlsberg MOM, and it was a single clear choice after an excellent first half giving Jets so much energy. Sean Giordmaina on his return to starting a game and finishing off a match !!

The Reserves won a big and challenging match at Cockfosters Reserves 1-2. Jets had to come back from a goal down at the break. A penalty by Vickers tied it up at 1-1, and Danny Johnson slotted the winner, both after coming off the bench. Jets Reserves man of the match was Albie Booth.

The Vets love their football, and a superb win over Lemsford reserves saw them be cup giant-killers today. The Vets came back from 0-1 to win 2-1 vs Hinton reserves, all the goals coming in the first half.

Ian Holdom scored his first goal of the season but pointed out it was number 352 of his Jets career, to level the scores and Paul Danslow got the winner. The big applause, though, goes to manager Tony Marren who played today in his 5th decade representing the club, hows about that for fantastic. 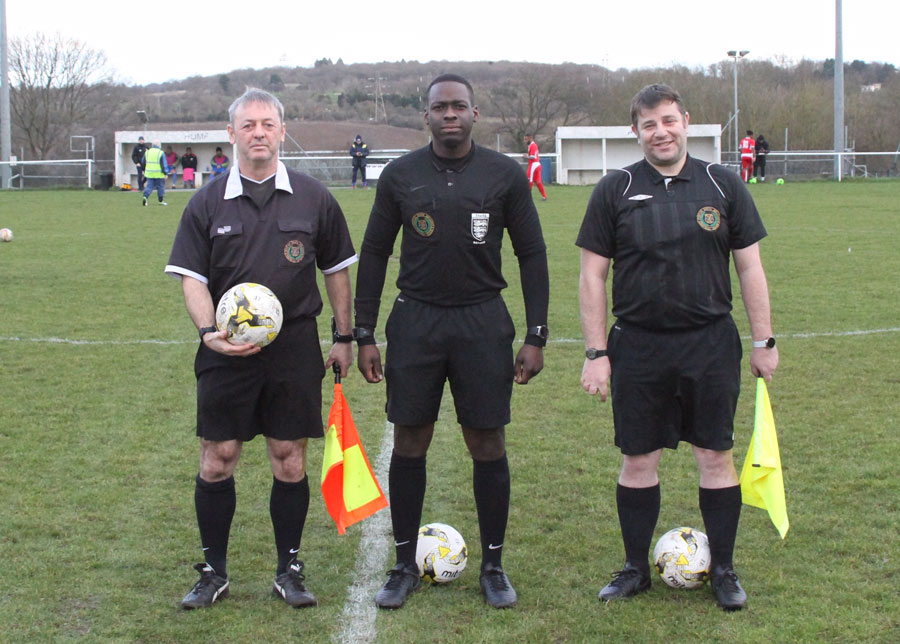