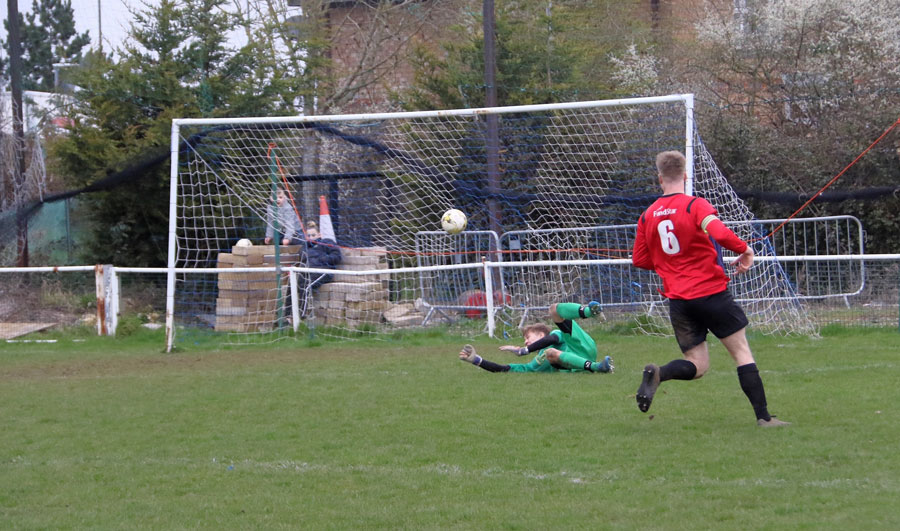 Jets Top of the Form

Jets stormed to a superb 2-0 home win over second-placed Tring Athletic to climb to the fringes of the (second place) promotion chase themselves. Five clean sheets in the last six matches have put Jets top of the present SSML form guide.

Jets had the changes to make as top scorer Reece Cameron fell foul of the dreaded Friday night virus and Andrew Brennan was nobbled in the pre-match warm-up by one of his own players !! 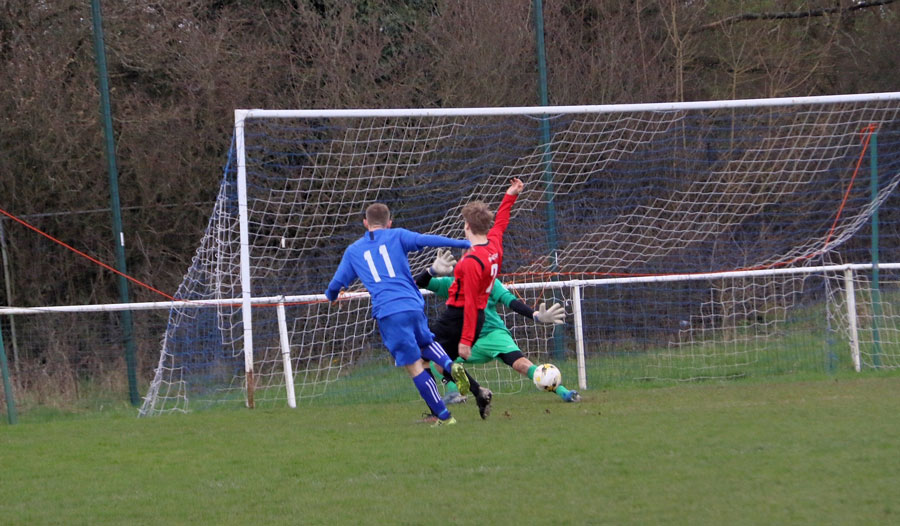 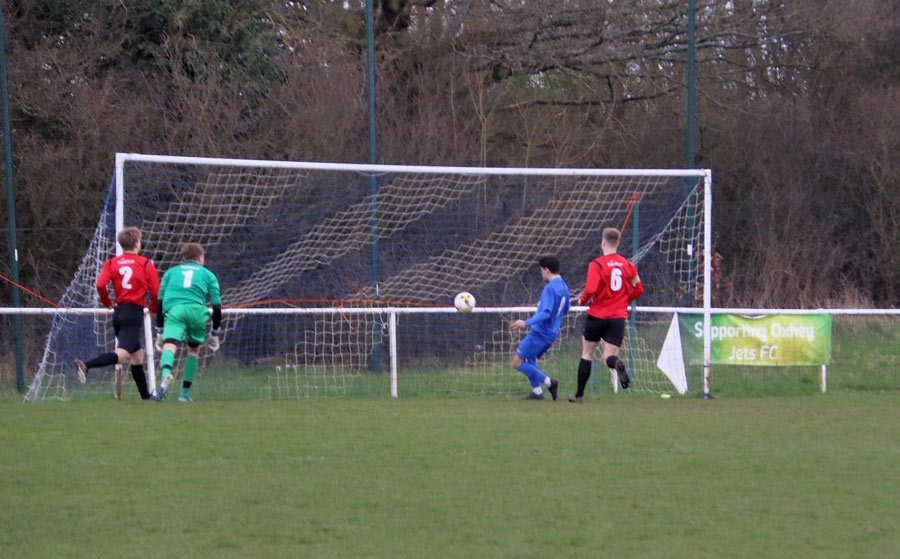 The save pops up and Sean Giordamina heads home

Jets were straight out the blocks when Nick Kerley unleashed a power shot and, not for the only time in the match, the excellent young Tring GK denied, but his saved looped up and came down with snow on it to the waiting Sean Giordmaina on the line waiting to nod home 1-0 ( 4 mins). 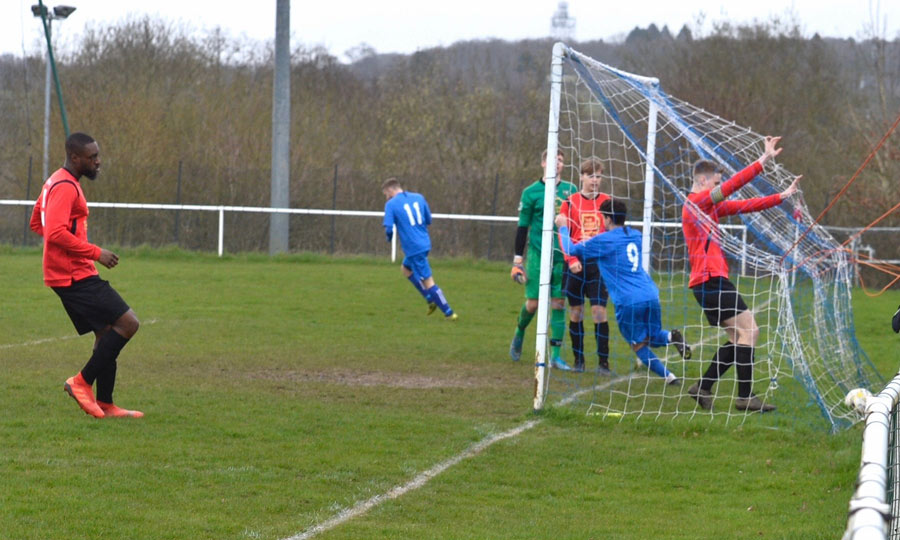 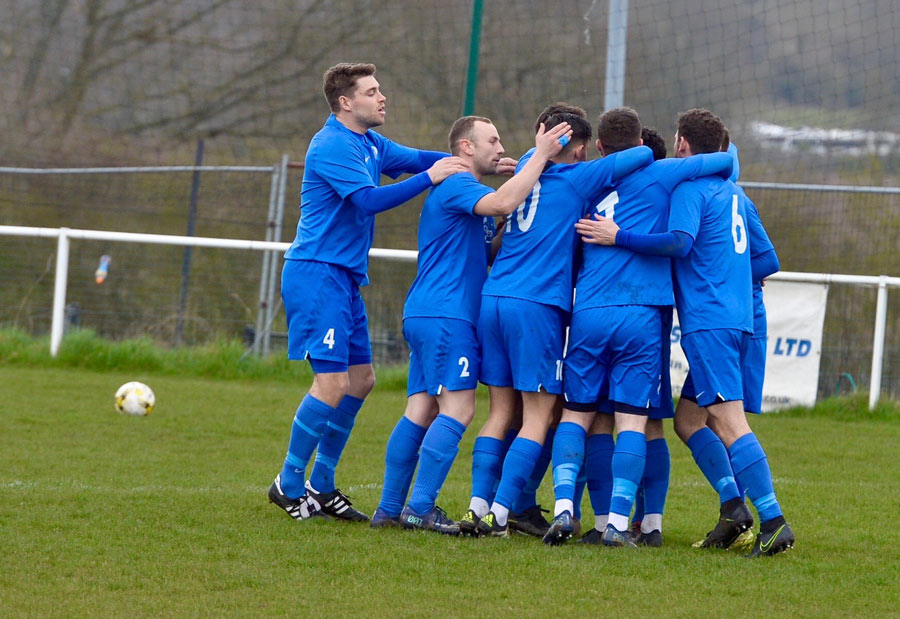 Jets had an edge on the possession but this young Tring side, thrown into action by incidents in their club, are doing their club proud and are no pushover, so it was a well refereed great battle on a wet, difficult pitch on the wings. 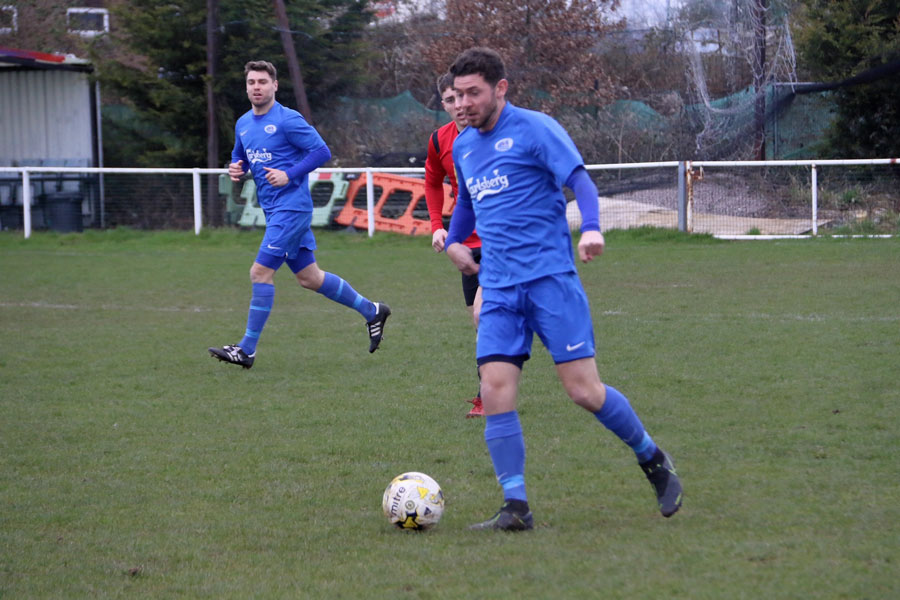 Stormer of a match from Leigh Stevens 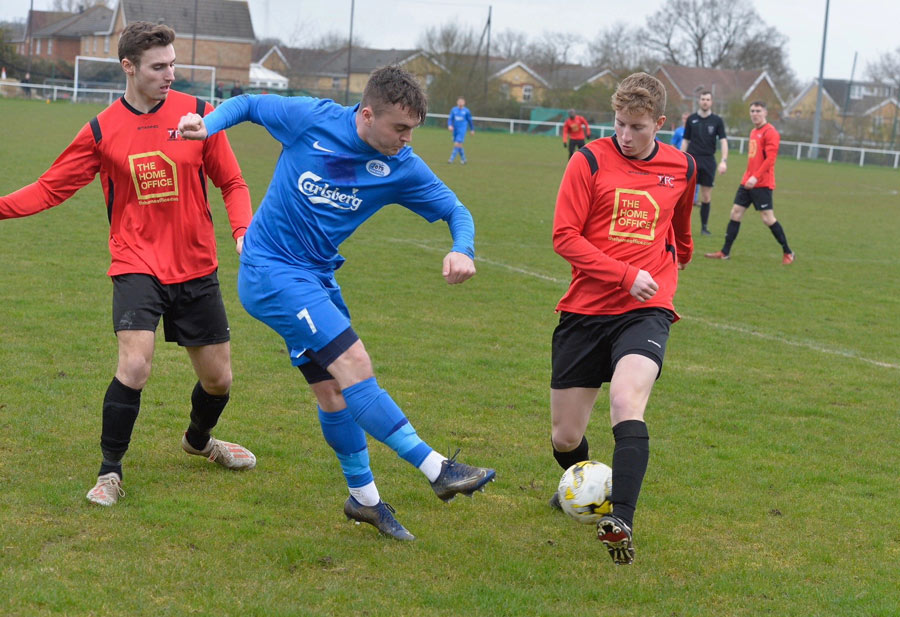 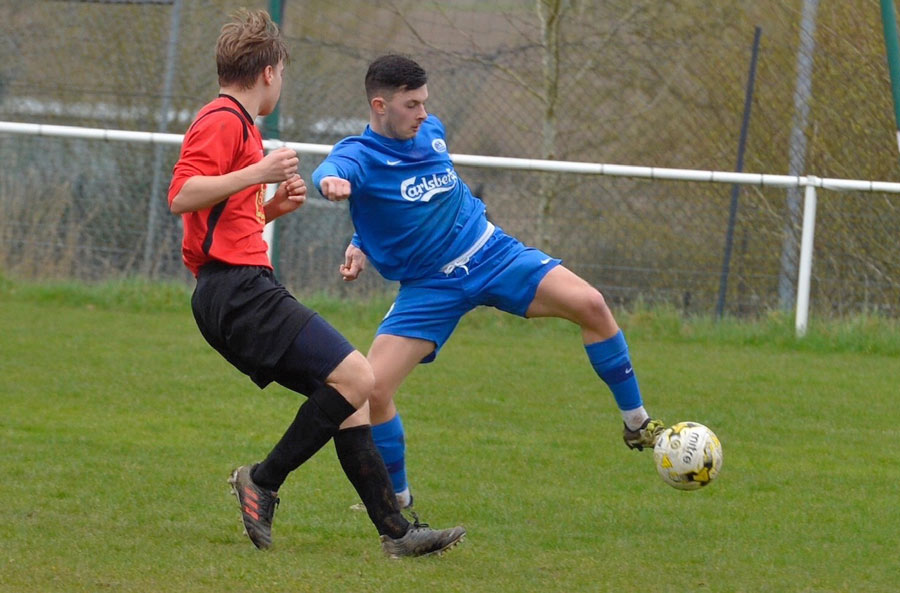 Louis Bircham connecting well up front with Nick and Sean.

Jets had a very imaginative front three with Kerley, Giordmaina and Bircham unselfishly feeding each other in. All it needed was that final touch and a bit of luck to send Jets away. The middle today was incredible, as we’ve said the pitch wide was difficult, but Leigh Stevens, Luke Preedy who braved through the Friday virus and limping Andy Brennan took no prisoners and competed for every ball. 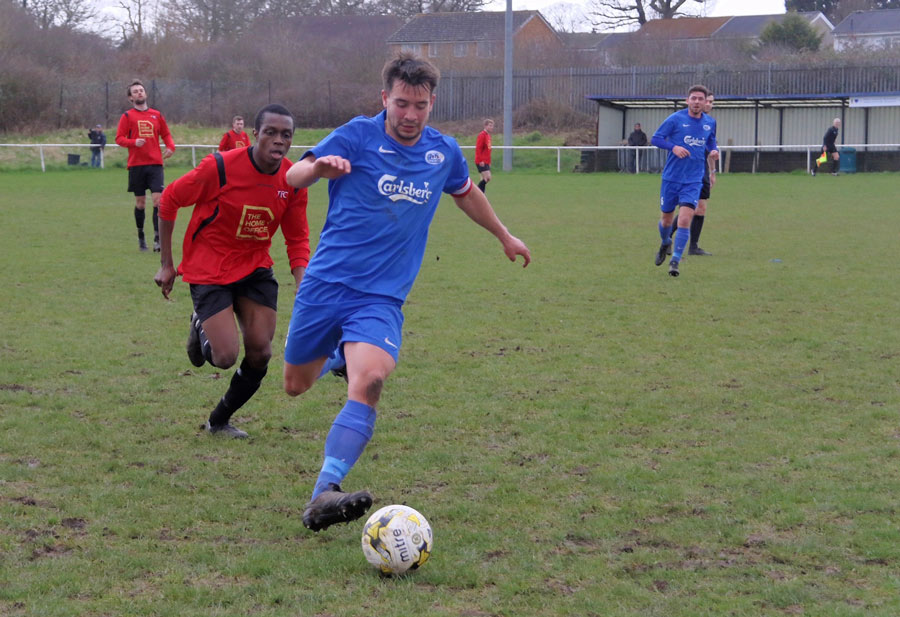 Another captain’s performance from Tom Gibson

The backline today as the last often recently were tight and solid with Speer and Gibson springing many an attack leaving Bonner and Bell on rear patrol. 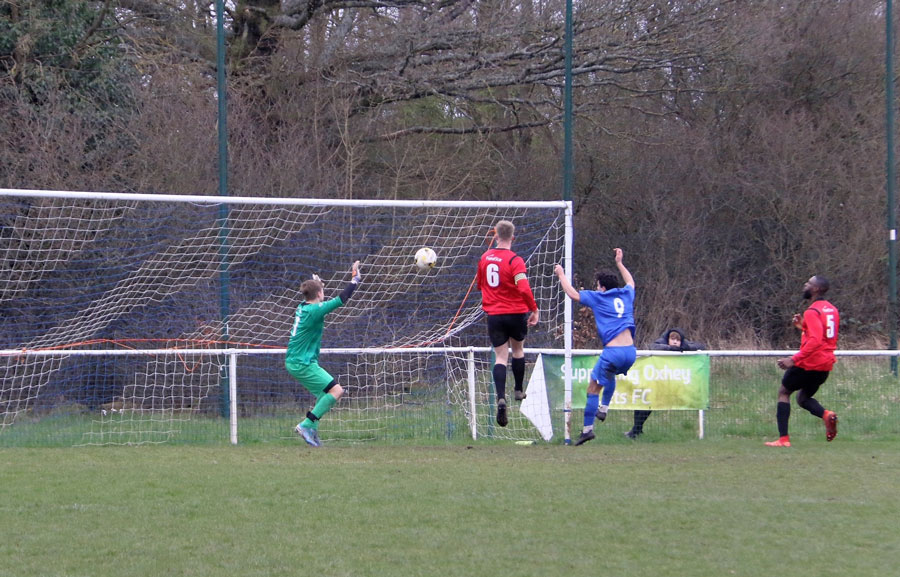 Tring had two penalty appeals turned down by the referee who was right close on the scene to judge then miss of the match fell to Sean Giordmaina who from a superb pinpoint ball looked to have headed into an open goal. Still, it hit the underside of the bar, bounced down and out, leaving the Malteser holding his head in disbelief. 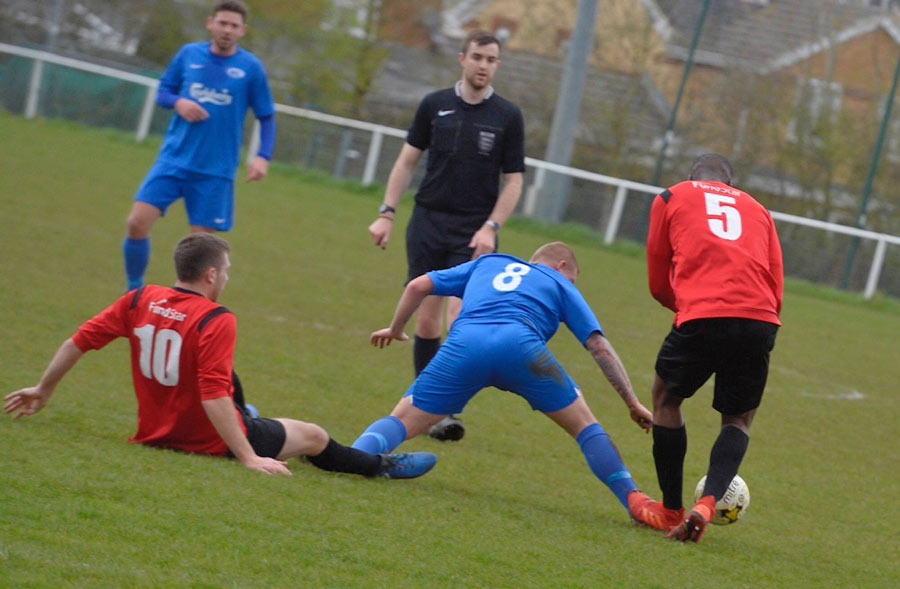 Andy Brennan lost to injury at half-time, caused during the warm-up!

Jets had to change Brennan with Harry Beaumont at the break but Jets carried on the same, but Tring then had their best period possession-wise and Jets needed to be defensively on top of the game.

Nick Kerley was then denied by the save of the match. 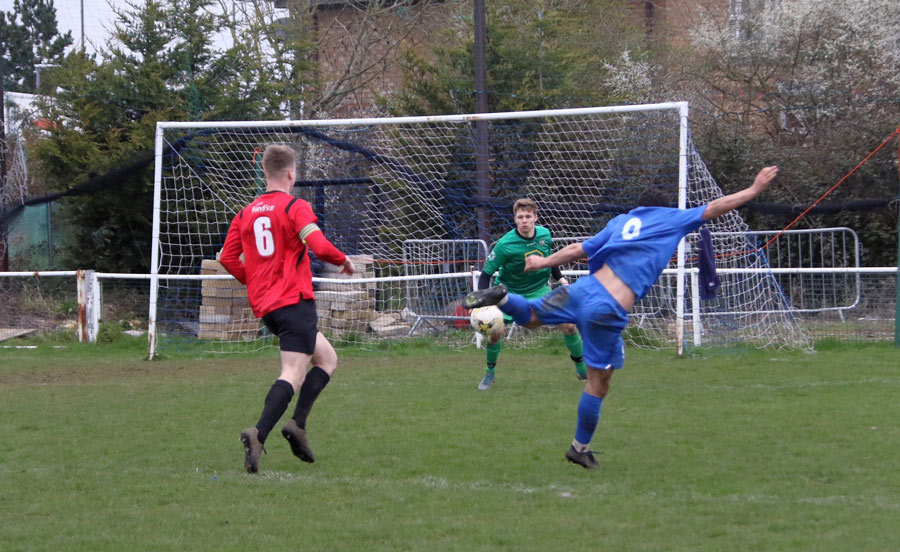 Sean latches onto a Nick Kerley through ball and fires home his, and Jets, second.

Both sides had a penalty shout, but both looked reasonable refusals. Then finally the killer goal as a pinpoint through ball by Nick Kerley was hunted down by Sean Giordmaina. Sean’s excellent shot was parried by the keeper but in many ways, unluckily for him but great for Jets, there was enough on the power to carry the ball into the net for really game over for buoyant Jets. 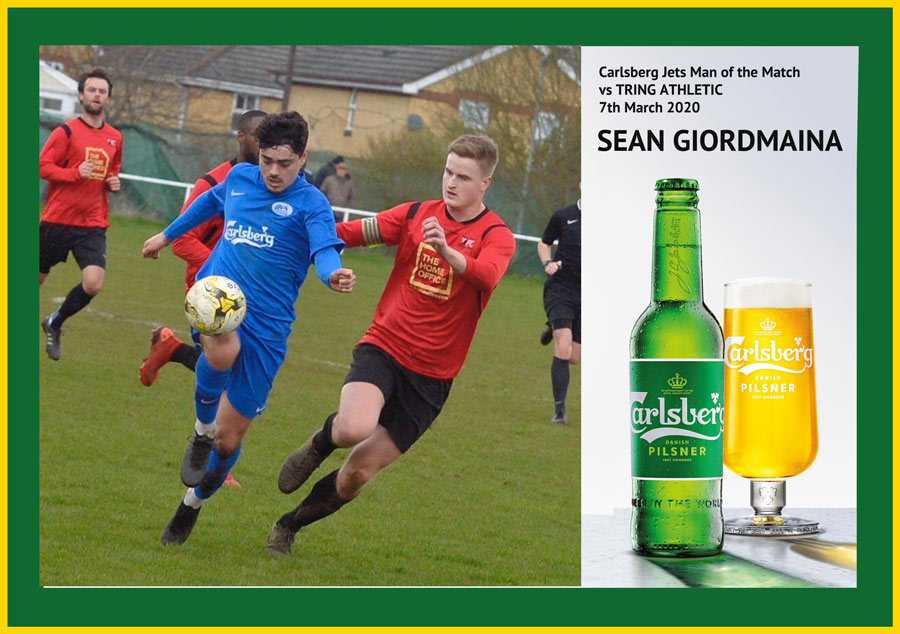 Man of the match was unanimous in favour of two-goal Sean Giordmaina who not only scored the two but led the line excellently with a mega work shift. 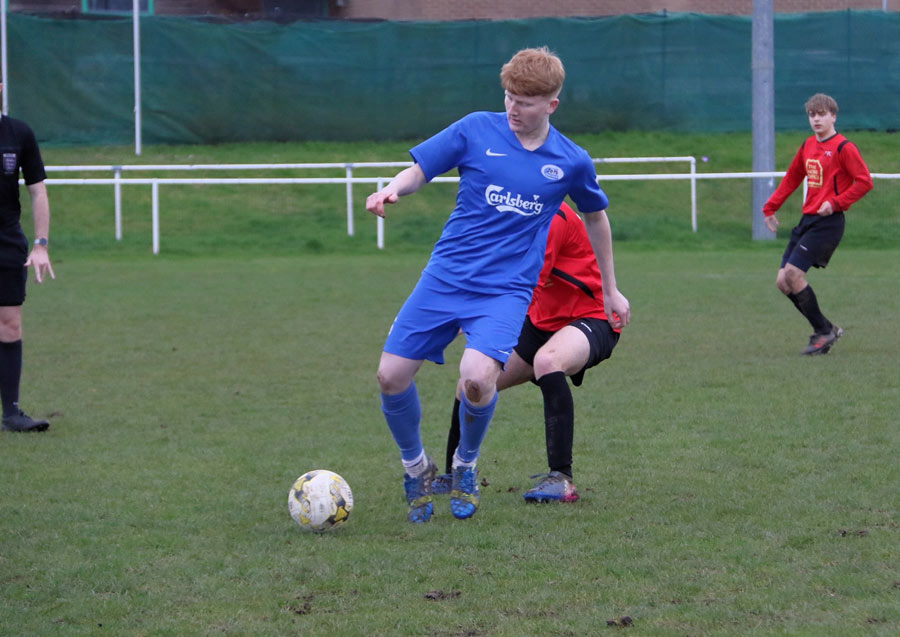 Jets boss a Tim O’Sullivan said “the lads did brilliantly against a tough Tring Athletic team and played some great football at times on a difficult surface after so much rain. It’s a fantastic tribute to them to top the SSML form guide, and now the pressure comes off the league point campaign and will rotate the squad for the St Mary’s cup game v Bovingdon on Tuesday weather permitting. 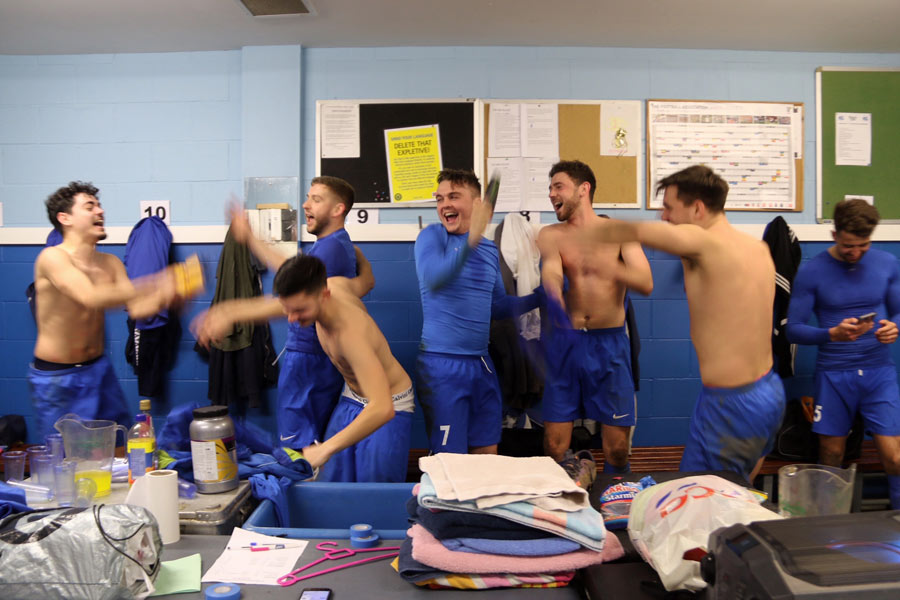 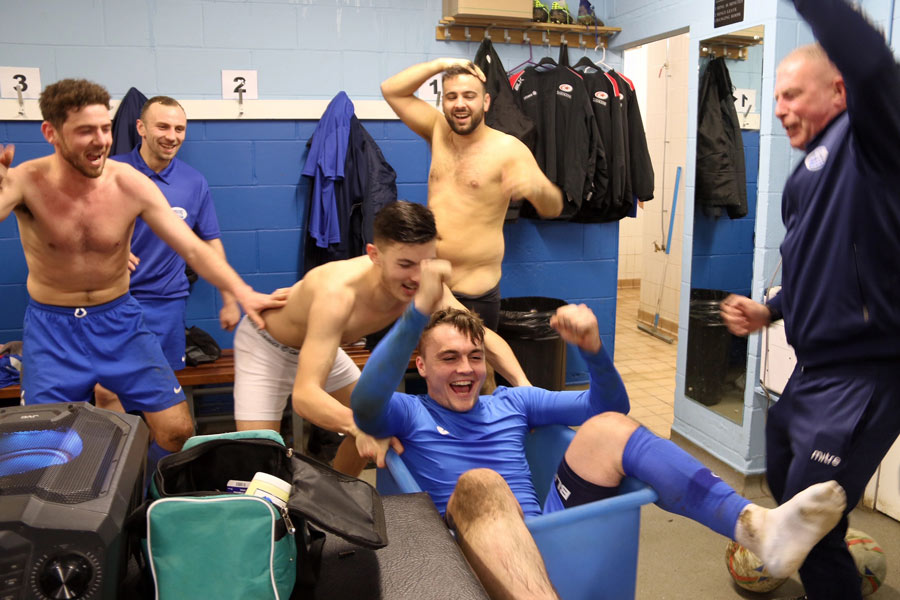 Post-match the changing room atmosphere was electric as another top-four side falls to the Jets in this excellent run.

The Vets continue the excellent run in the County league Beating Hinton 3-2. 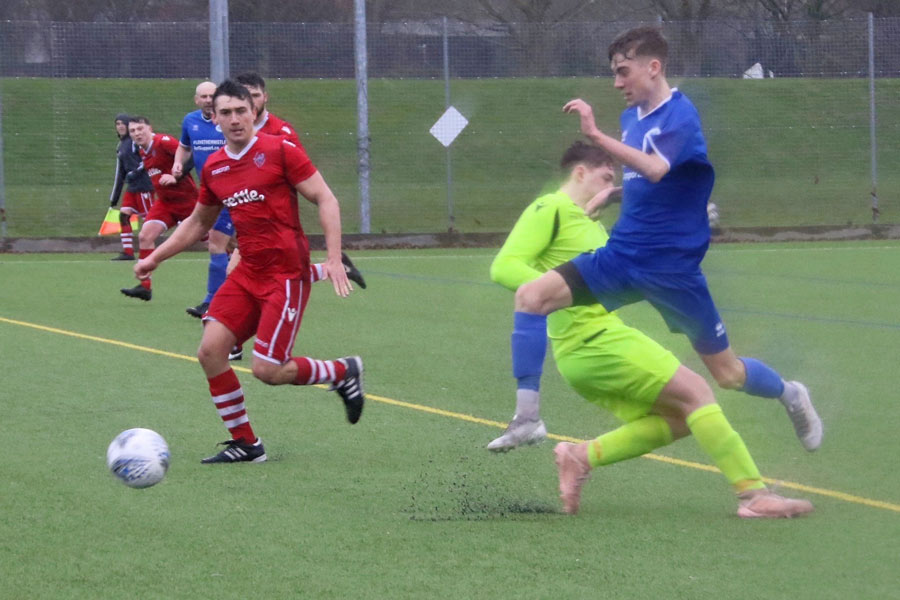 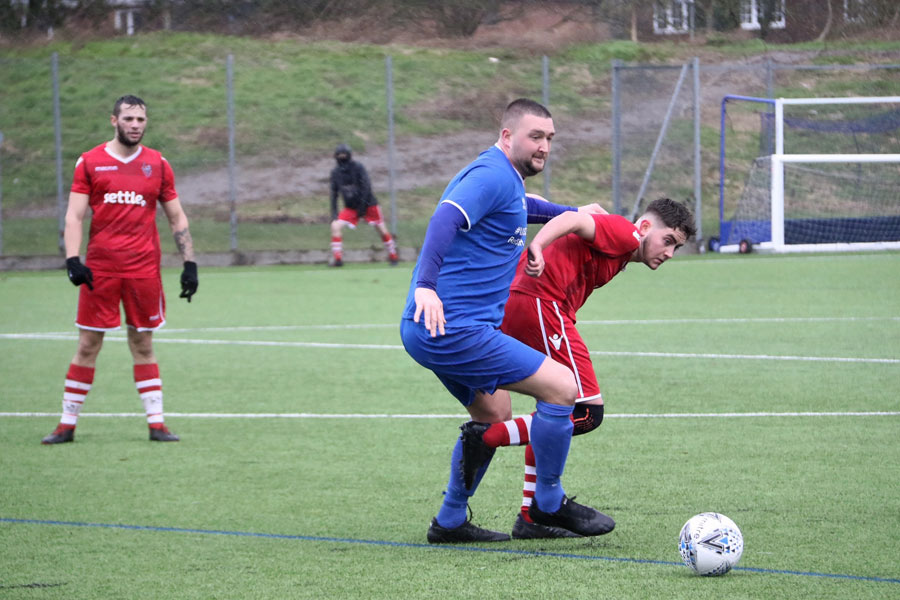 The Jets top scorer in the previous big first team title push Wayne Gladdy banged in two, while 16-year-old Owen Ayres, playing alongside his…. well bit older dad, got the third in another excellent win, while Liam Arnold grabbed the Man of the Match award. 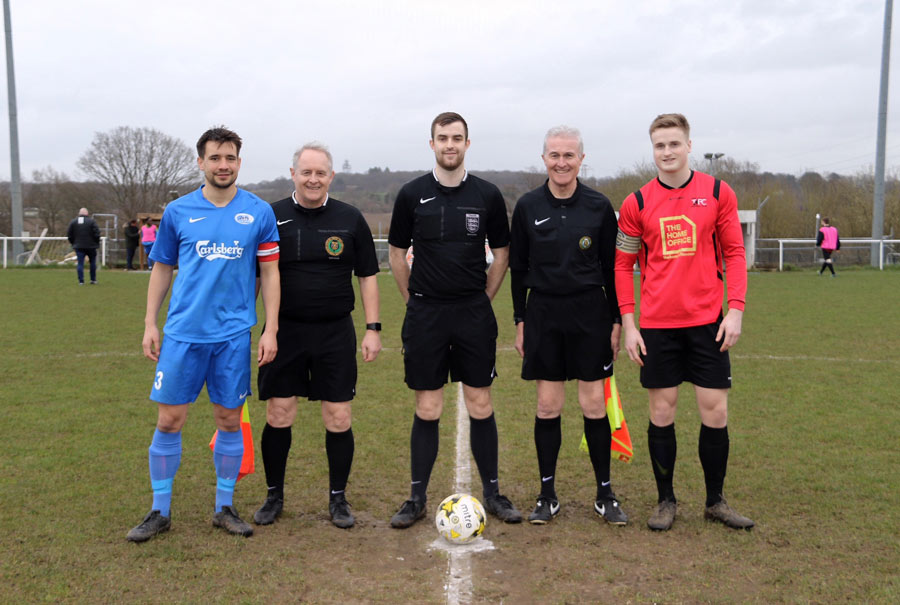 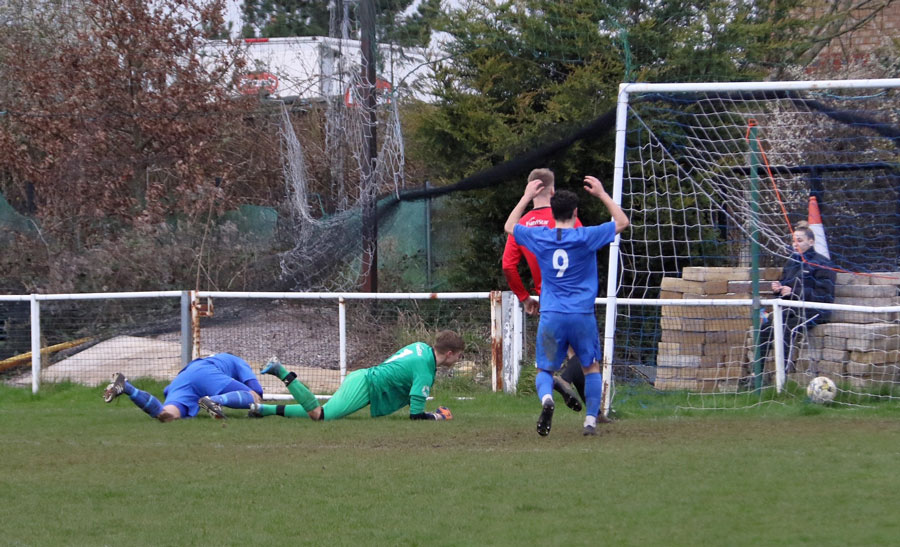 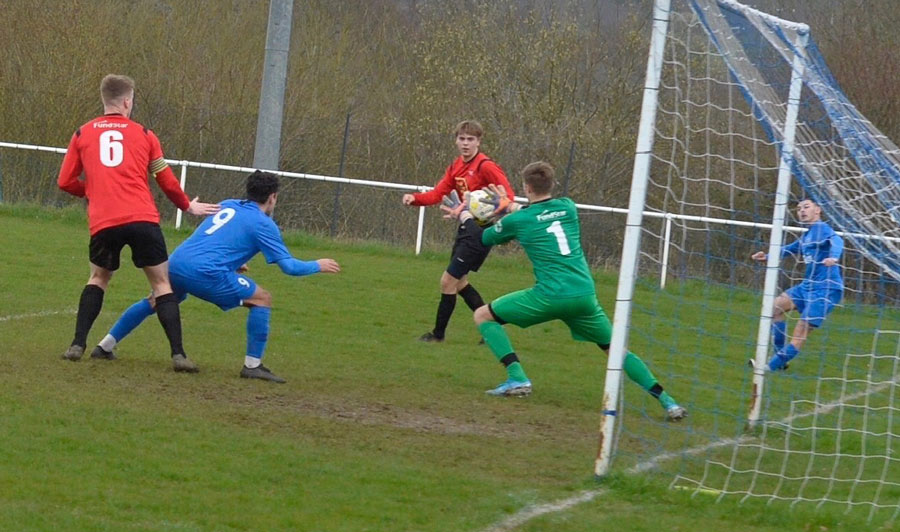 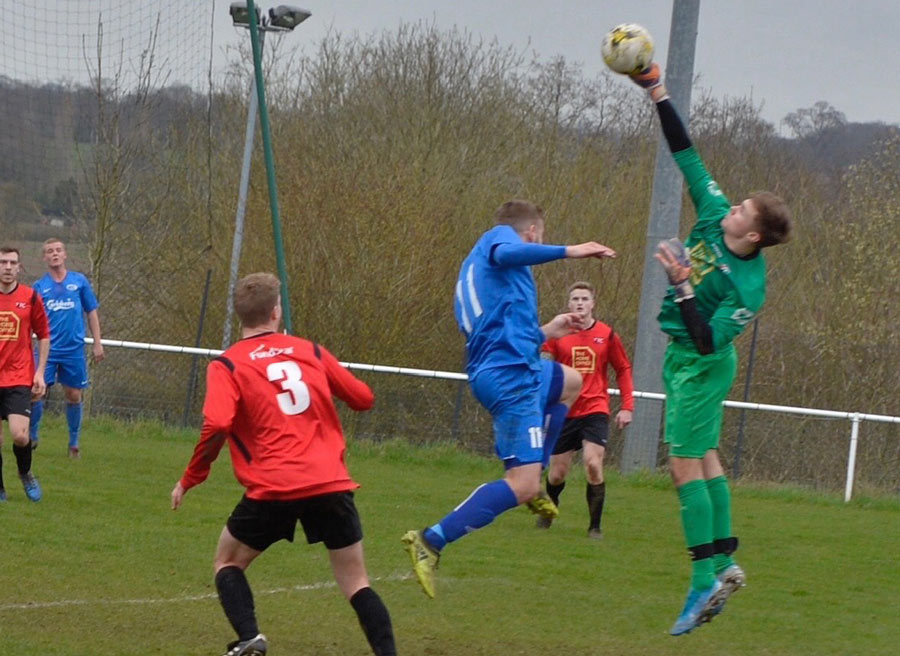