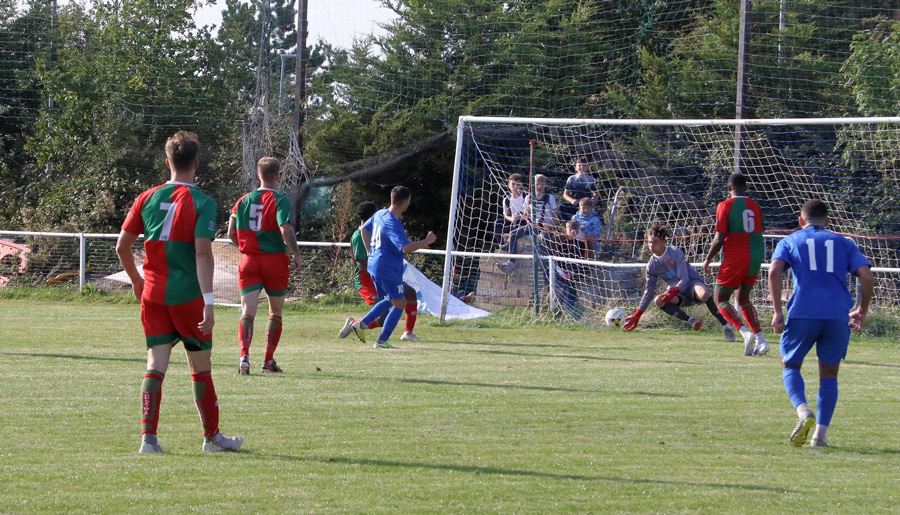 Jets dipped their colours out of the FA cup against step 4 Chalfont St Peter, a 90th-minute header knocking out the hosts in front of a big crowd for this local derby at the Boundary stadium.

Jets will find it a hard defeat to take, there were some underlying feelings between the clubs, and it was a tense, tight battle with no evidence of the mythical step difference between the teams, actually on the day the neutral would have mixed them up … just !. Only the deluded would use the steps to describe or justify the match, but some did.

Jets lost Reece Cameron injured and are still without Andy Brennan with this wretched suspension from a Sunday twitter comment. Jets were, however, able to unveil their new signing Danny May. Also, there is strength in depth now at Jets, and they were still able to exchange in a full-bloodied match, one they could and should have won, but as so often in the FA cup at all rounds, late fate has the habit of biting you on the rear. 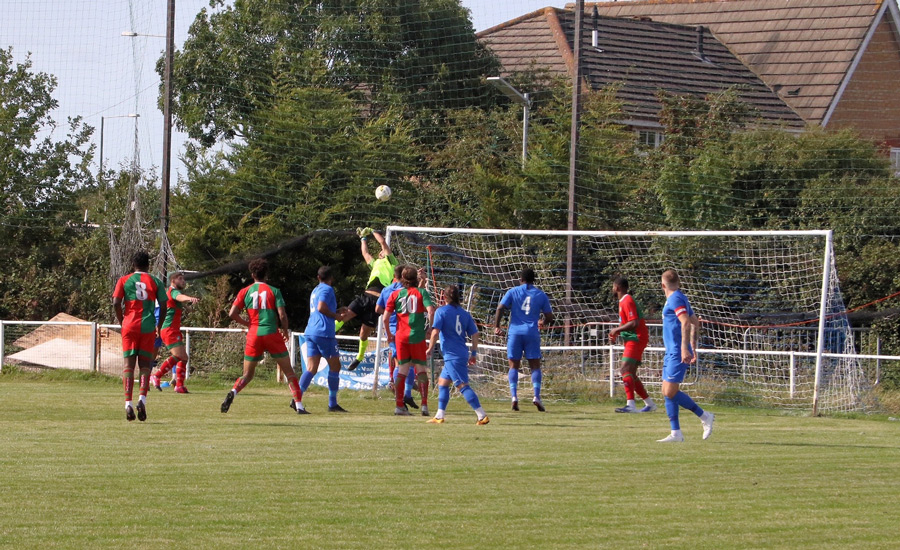 Good save from Rob Partington

Jets really can be proud of their efforts today, the back four, in particular, were outstanding protecting Partington’s goal, who was up to everything when they were breached. Speer, Gibson, Brown and especially Ashley Lewis were impressive, although just one slip was to be a match loser, cruel justice on the day. Rob Partington even felt his shoulder dislocate and go back in, but continued unphased at his best.

The front three worked tirelessly and had to against the well organised Chalfont defence who also worked hard and tight to hold Jets. Although it has to be said Jets failed to play their typical game, maybe the occasion or the crowd who knows but the supply chain broke down today and left the front line battling for 50/50 high balls and not playing the flowing game of late. 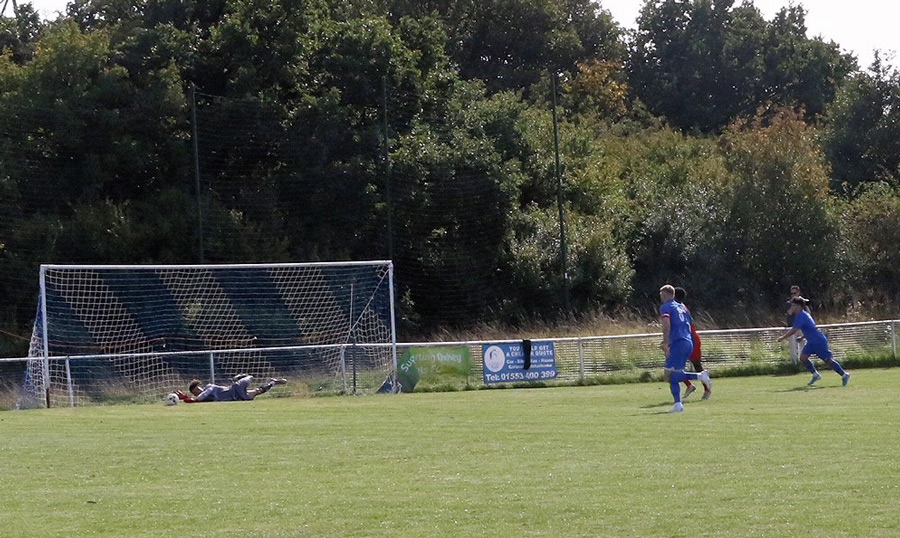 Two relatively early chances showed Jets intentions. Sean Giordmaina fired in a cross goal shot that was saved by the keeper. Then, Bircham was inches off connecting with Giordmaina’s low cross. Then the closest early chance when Lewis Putman beat the keeper but was just the wrong side of the post.

Lewis was inches away

It wasn’t one way at all, but Jets had the edge, and you fancied their chances. It was a tight game though, and it always looked that one goal, either way, would do it. The biggest worry was that Jets were not on top of the midfield battle and were guilty of being caught on the ball far to often, caught out by the speed and numbers coming in to shut them down. Jets turned to the alternative long high ball but, on a dry summer pitch, it was not helping the attack. 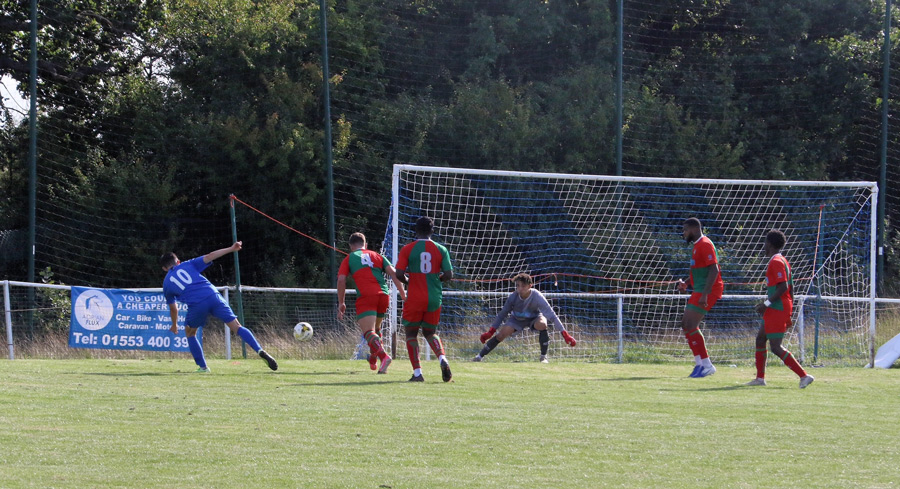 Half time and the boss and coaching staff were not best happy with some aspects while pleased with the effort, just a bit more quality in dangerous moments and quicker release could swing this match, play not launch the instruction. 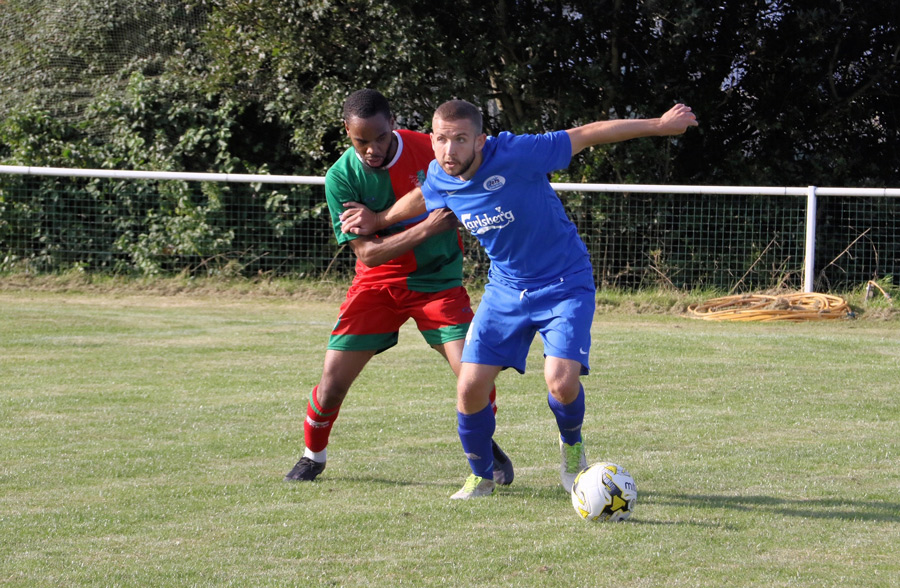 The introduction of Nick Kerley on the hour and the formation change swung the game more Jets way. Kerley did open up the Chalfont defence more, and Jets created two match-winning chances, one a superb curling effort from Lewis Putman that beat everyone, but not the crossbar as it struck the underbar and came out. 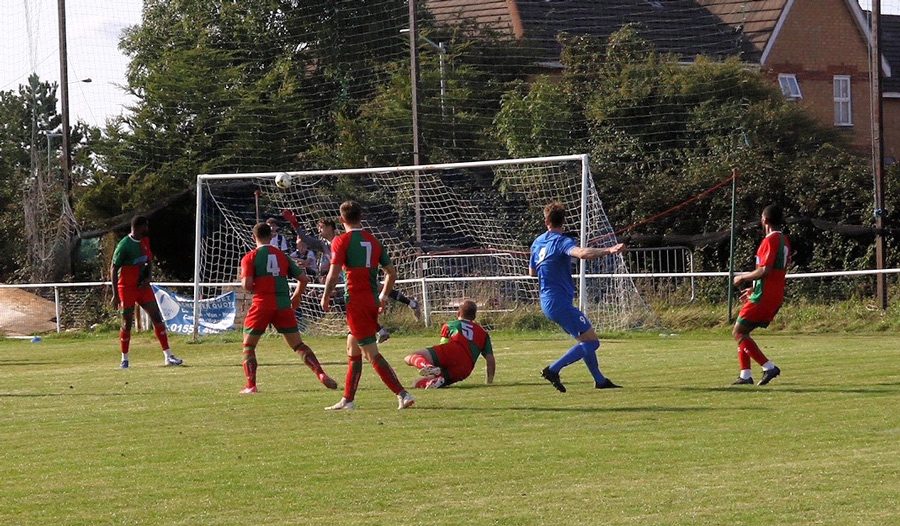 Lewis Putman hits the underside of the bar

Chalfont also got some space from the change and looked more menacing as the game became more open and both teams went into throw the dice time knowing there was no extra times or replays. 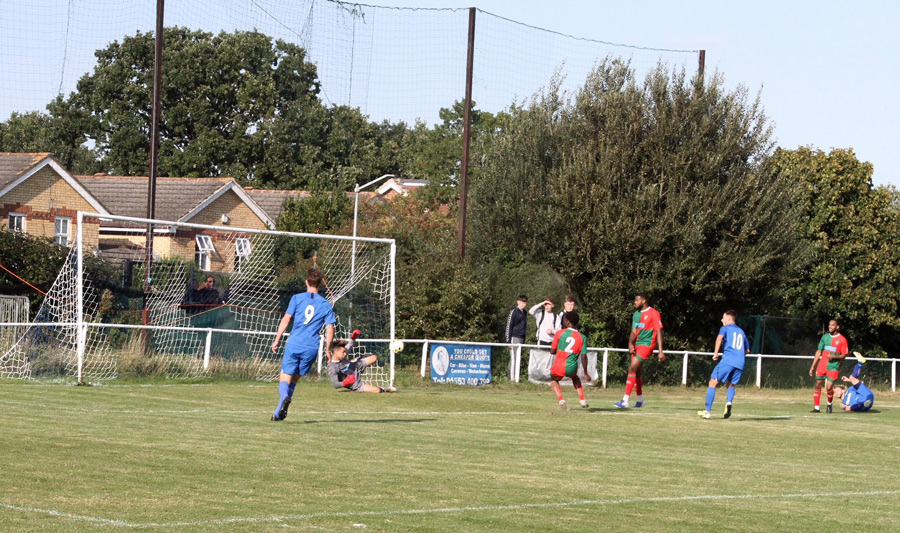 The best bit of floor play opened up what looked like the winner as some superb football and interplay ended with a square ball to Bircham in the centre unmarked. With the goal in front of him, his connection was not best, and the Chalfont keeper stuck out a hand out to deny a match-winning moment.

It was a push for the winner that ultimately cost Jets right on 90 mins as a slip allowed Chalfont to attack. The initial move was comfortably dealt with, but as everyone came out the Chalfont left-back was, for the first time, not tracked and his pinpoint cross into the box caught both centres out. The Hemel Town loanee striker Sidney Ibie found the space between the centres and the extra yard to steer the accurate winner into the net. It caused what looked like World Cup-winning Celebrations onto the pitch from the Chalfont bench; such was the evident relief from the visitors to smash and grab a winner against the SSML side.

It was a bitter blow, and there were bad feelings between the benches, but it was a match that was hard-fought and deserved nothing but respect to the players involved. 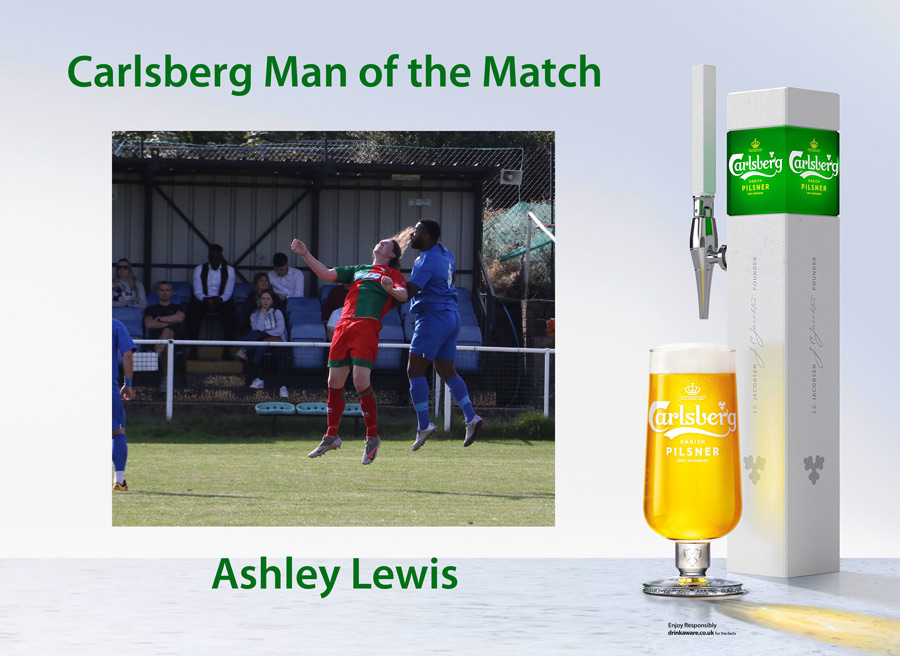 Jets Carlsberg man of the match came from most of the supporters we canvassed and went to Ashley Lewis who had an excellent game in defence.

So the FA cup is over, Wembley and the FA vase still a dream of course but for now bread and butter stuff in the Spartan Premier league with a heavy fixture list that will test most clubs to the full.

The final message of the day was simple, the lads did superbly and to see a step 4 side celebrate so hard and long for beating us shows where our aims to be stand. No self spotlighted Roy of the Rovers ending for Jets today but those days will come.

Gibbo was a real battler 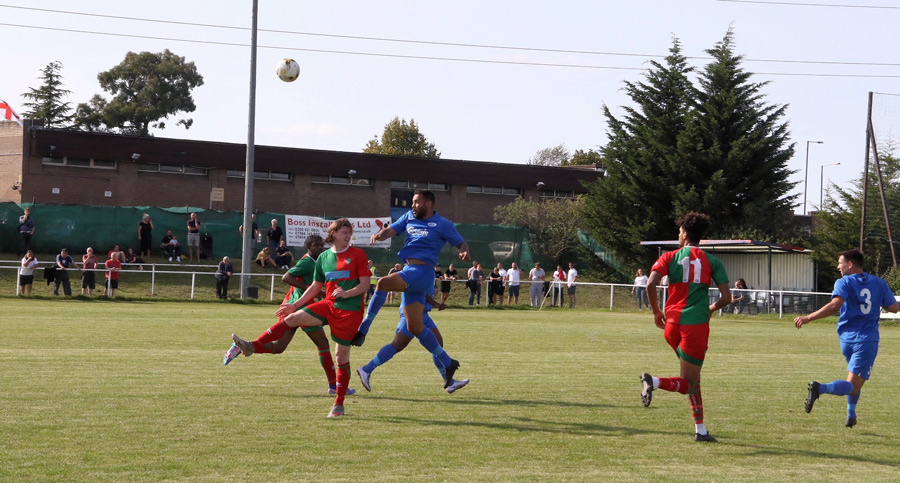 Darryl Brown in a strong centre back partnership with Ashley Lewis 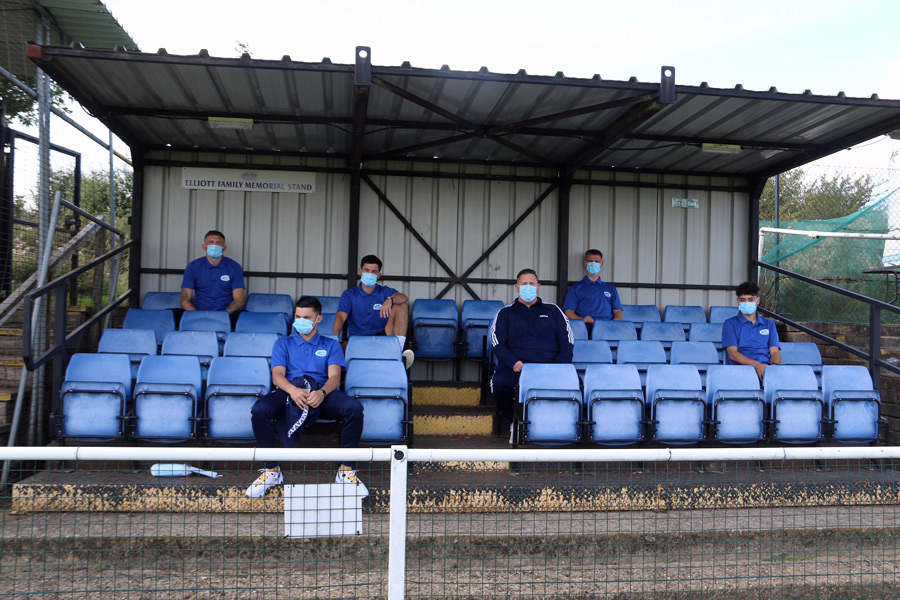 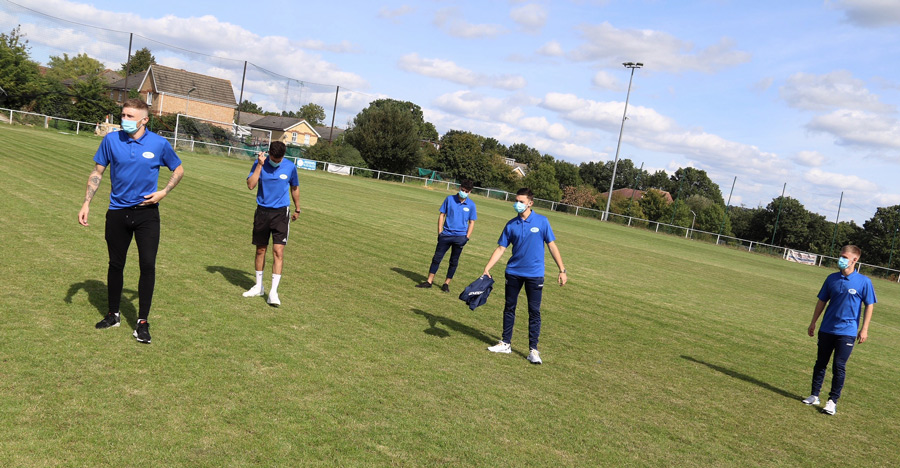