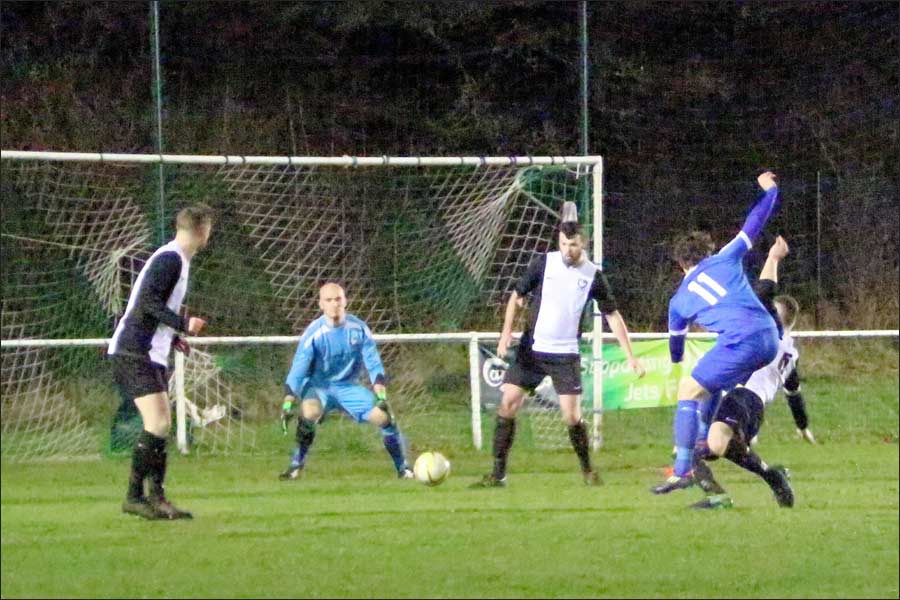 Jets went off the runway at breathtaking speed with a stunning attacking display that saw them 3-0 in front in just 19 minutes. Two goals from the players Berko and the Herts FA tried to block from playing in an apparent insider dealing that was withdrawn when Jets made it clear they would take the matter all the way, rule book in hand! So, their own rules sorted out after legal advise by the local suits, I’d high hopes for a fair and even football match to lift the gloom of league results, but it was not to be.

Luke Wells opened Jets scoring with a solo run onto Armitt’s through ball and scored off the post after just 9 minutes. 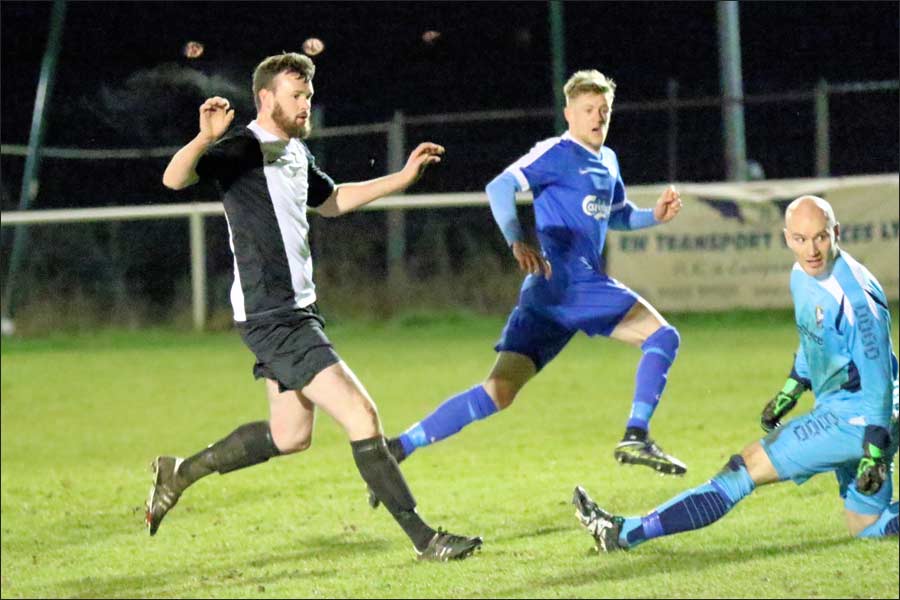 Lee Armitt slides his shot past the Berkhamsted keeper 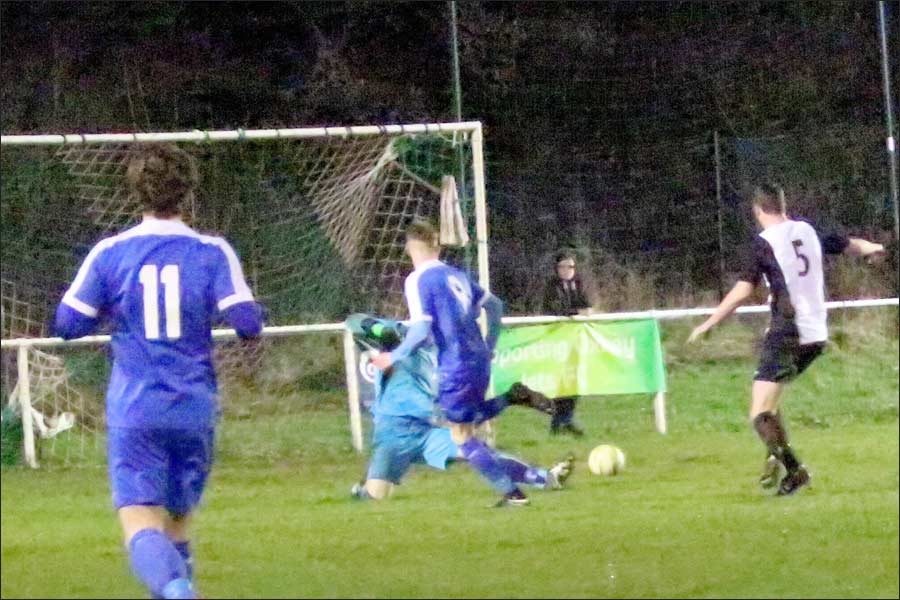 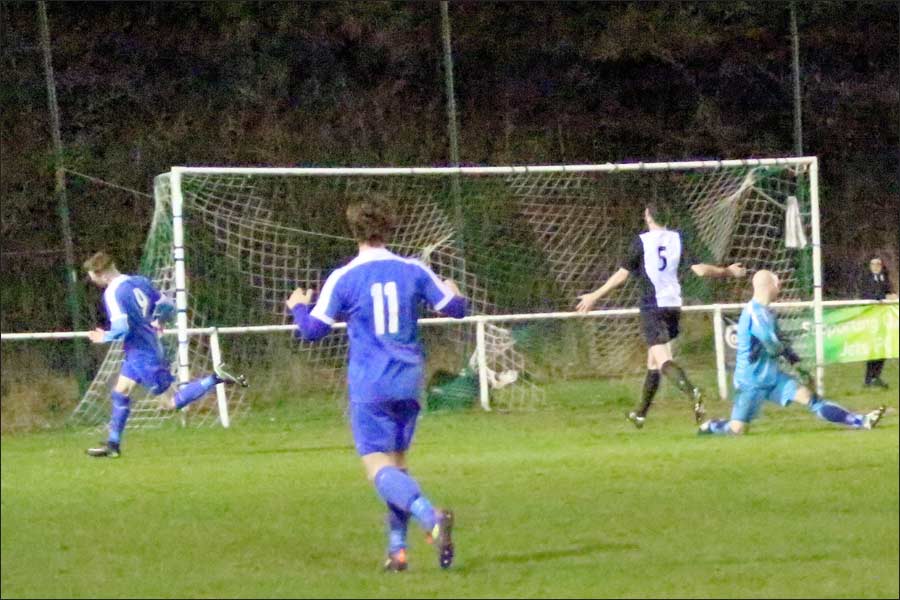 Gary Warn and Luke Beardsworth then combined to play in Lee Armitt who drew the keeper for a calm slot 2-0, 17 mins. 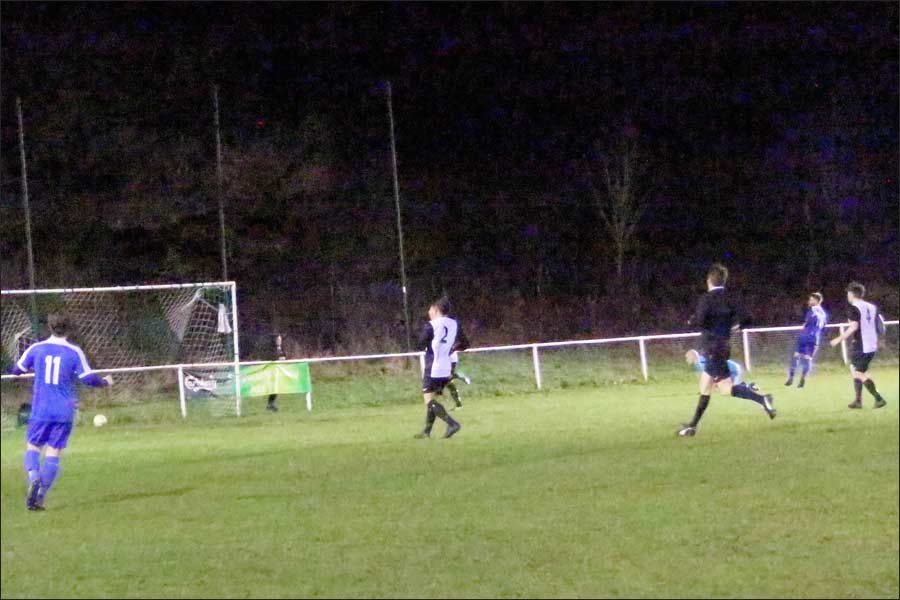 Luke Beardsworth then latched onto a through ball and calmly slotted from wide, 3-0 with just 19 minutes played. 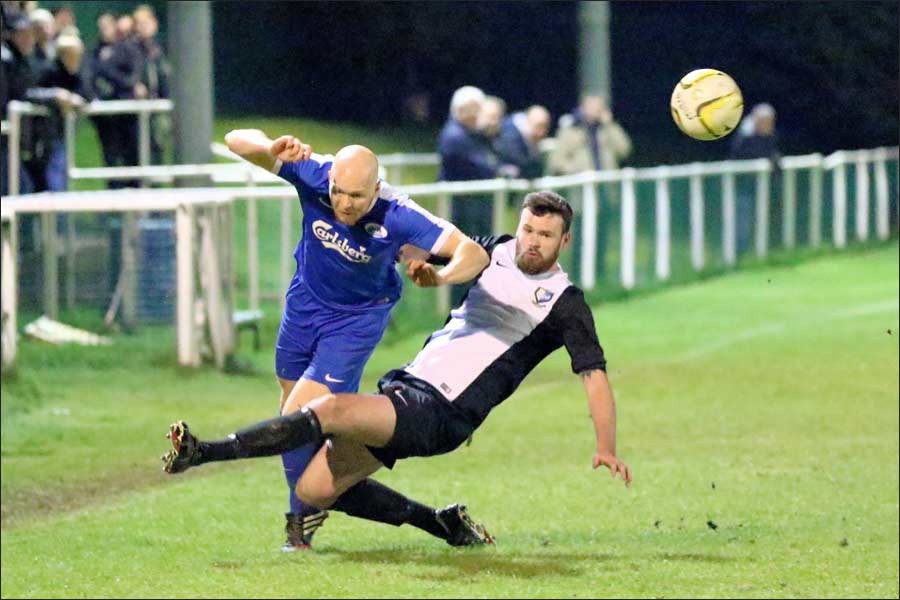 Dreadful tackle on Gary Warn with the ball long gone, but not even a word in the defender’s ear from the official.

Berko really pulled themselves together and, yes, a few heavy tackles went in to hold the rampant Jets and at this point not a single nod or a word or warning was to come from the match official. One such late clout was to end Gary Warn’s match and, in hindsight, it proved critical to Jets. 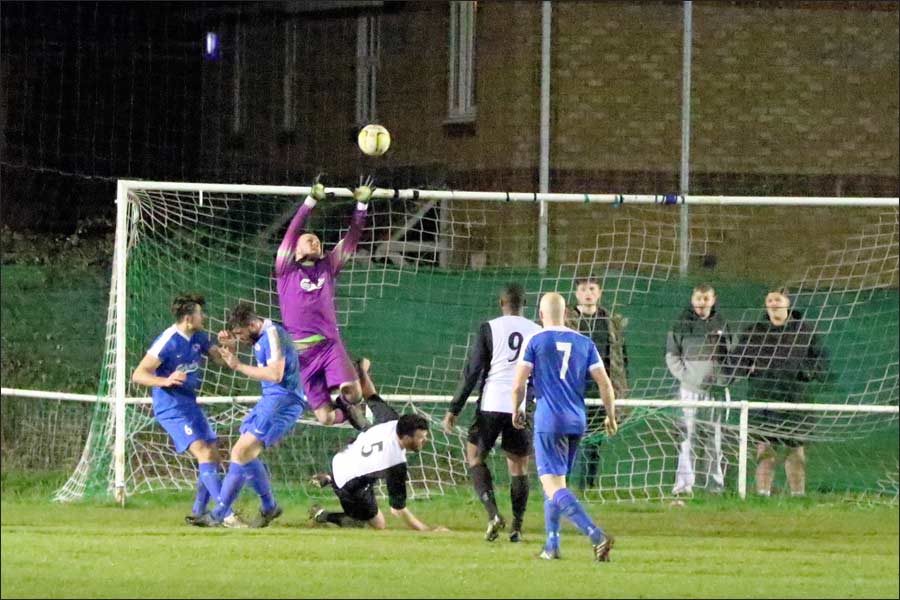 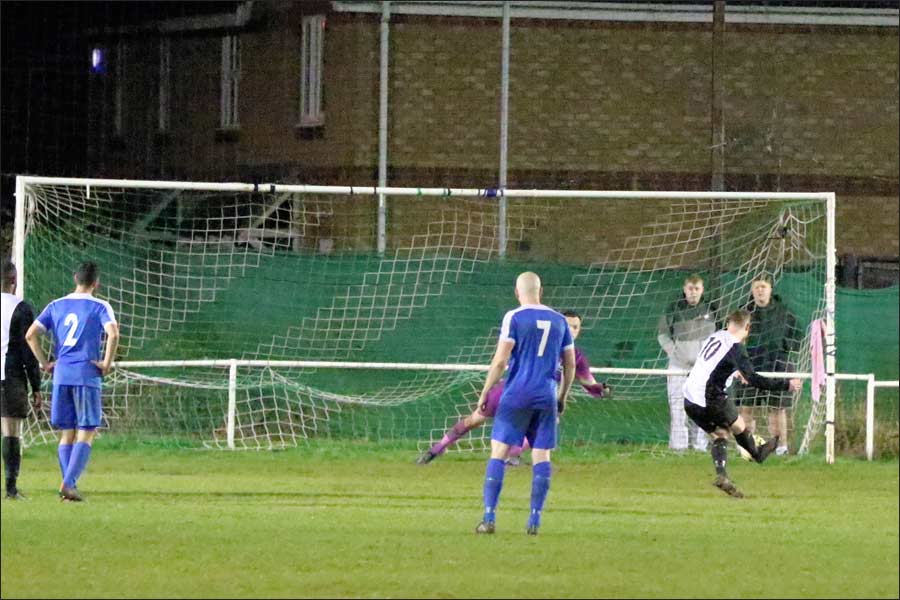 Berko pull one back from the penalty spot

Berko got right back in the game and well on top and on 23 minutes another decision that will stick in Jets throats as the official went to the spot for a clear win of the ball and it was another major turning point as penalty one was converted by Mead.

It was all the visitors now and Jets players seemed to lose their trust and belief in the officials, more so after Nathan Pooley was reduced to a hobble after being caught on the ankle, not dirty by our visitors just frustration that all our players get when chasing games, and they seemingly went to pieces and were more than happy to get to the break 3-1 on top with Berko pushing and Jets panicking.

It was a difficult team talk trying to convince a team that the official wasn’t biased and forget him and his one way arm and try to get him out of their heads and focus back on the game, but a minute into the half that became impossible. 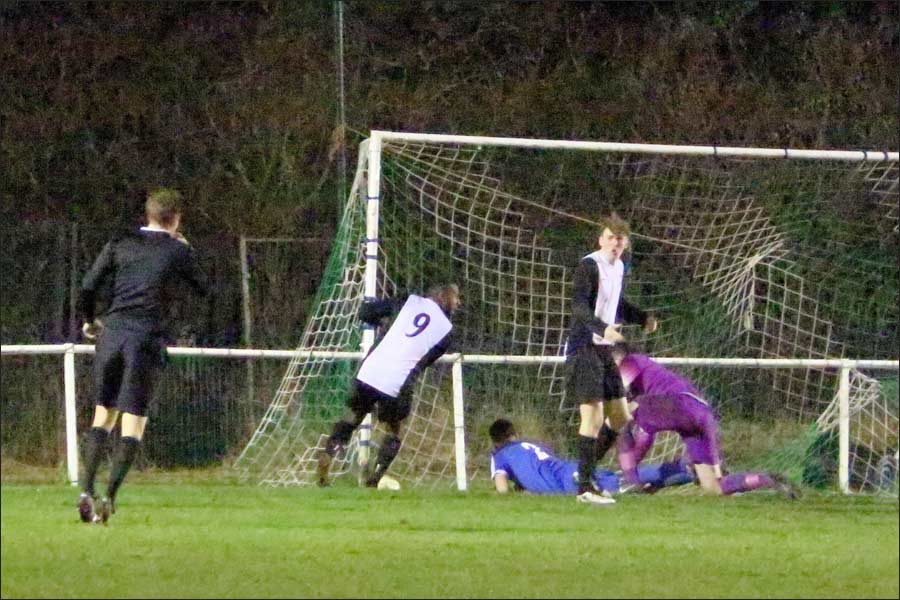 Ball in the net for Berko before official blows, then the ‘chosen’ decision is a penalty and red card

Mead scores his second from the penalty spot

Almost straight from kick off Berko attacked and the goal mouth scramble led to Bar Hariely handling on the line BUT photo evidence shows the ball that ended in the net before the referee blew was a goal, but in a bizarre few minutes with some Berko players pleading for a red card others going back because he’d said the goal was given, the officials it’s alleged said “do you want the goal or the penalty and red card”…

Now after the match the official said to me face to face that was sarcasm not meant, but it’s not acceptable to me as it seems that apparently some players called the tune and got their wish and it was a red card and penalty despite Berko official Mick Vippon loudly appealing for no red card to be fair to him. 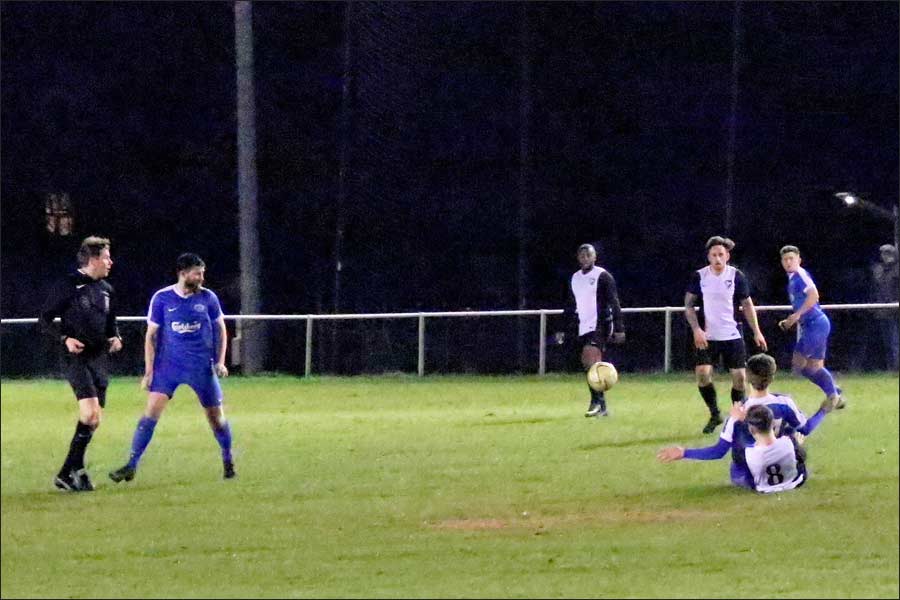 That was the end of the game as a spectacle. It was one way traffic with Jets seemingly well outnumbered by the black & white shirts and just desperately hanging on and relying on the break and running the clock down against the flooding forward Berko team. 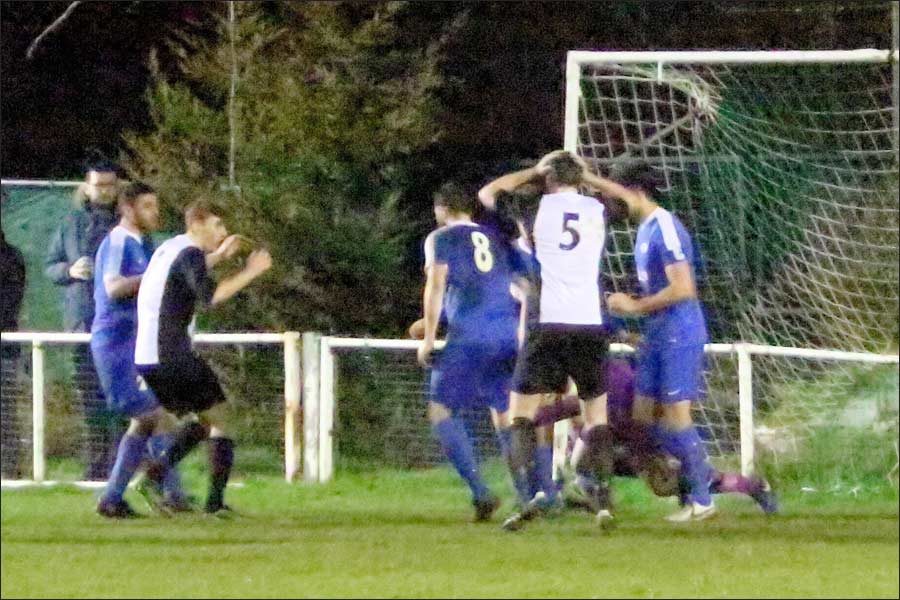 Stunning save from will Baker as Jets try to hold on

Armitt came so so close to taking it out of reach but his cross shot was inches past the post while at the other end Will Baker was performing almost miracle saves to keep Jets in front.

Another Jets player flattened and nothing given. Even a manager from another SSMP club can’t believe it!

Jets were picking up cards and injuries and almost on a one way system as whistle after whistle was the same result , kick to black & white !! Even supporters, I’m told, at the burger van were saying we will be OK, the refs got a Berko shirt on tonight !!! Sums it up and sums up the Jets players reactions. 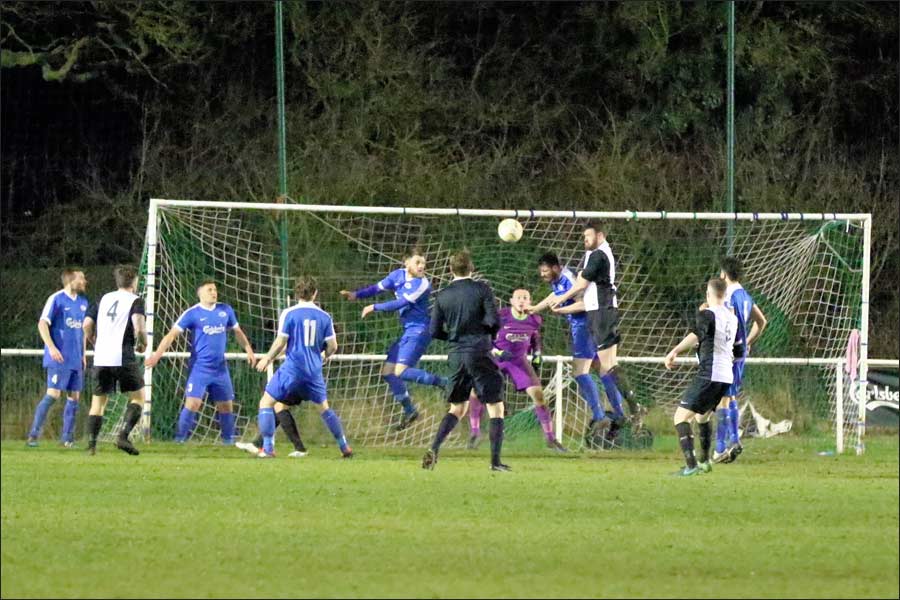 Strangely a couple of cards did follow late on almost in response to the crowds obvious opinion on what was happening out there. Then the game went a little midfieldy and Jets hard work was just looking as if they would hold on when, as the clock hit stoppage time, a clean break (maybe Jets shouldn’t have countered) the dreaded slotted equaliser and your heart knew it was game up. 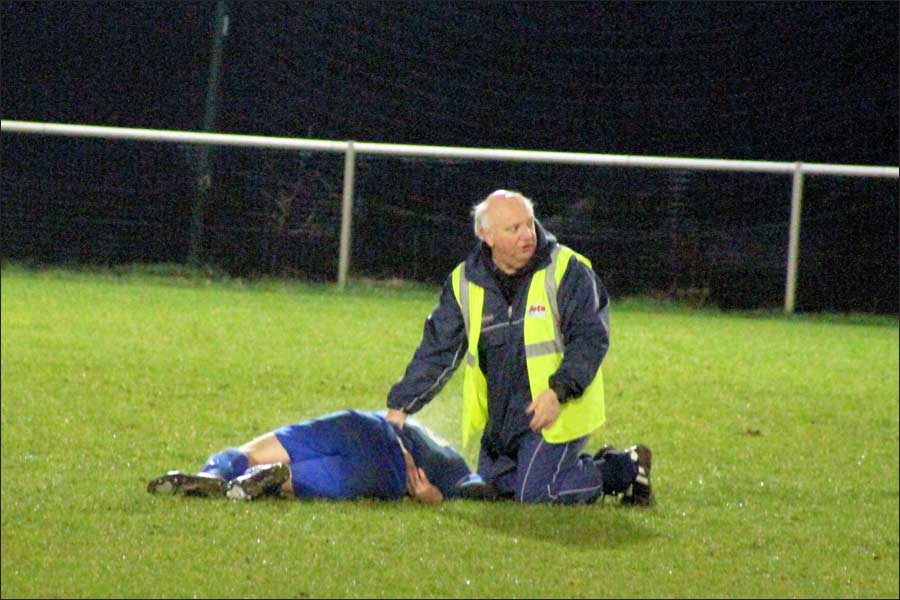 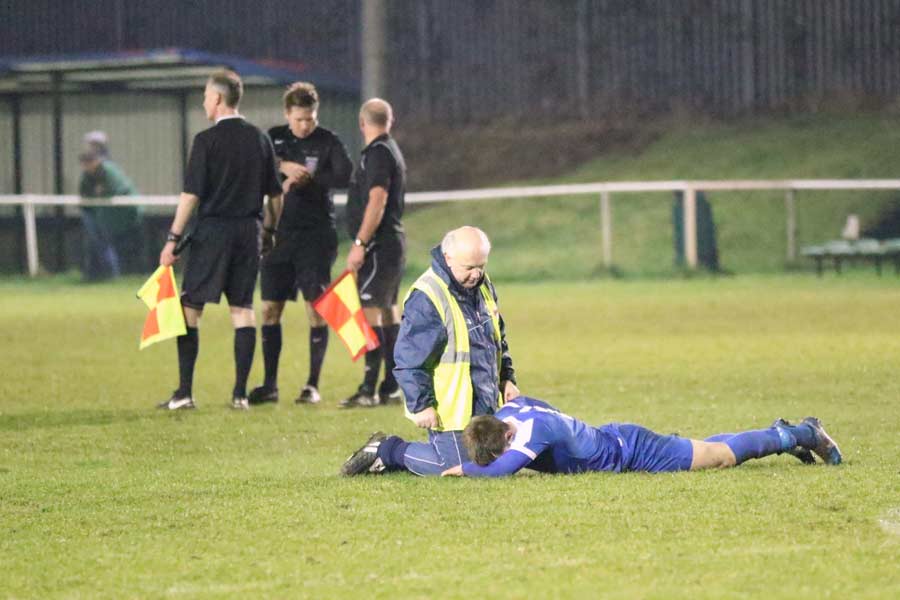 How cruel that it could be in the time added for the officials “goal or pen boys” time that, all be it expected, drew the game level. Even then time for one more bit of one sided controversy as right on time Beardsworth was flattened square in the back, nothing given but worse still left flat out wriggling in pain and only the assistant and a Jets official going to his aid, completely missed by the official more concerned by what people were saying. !! 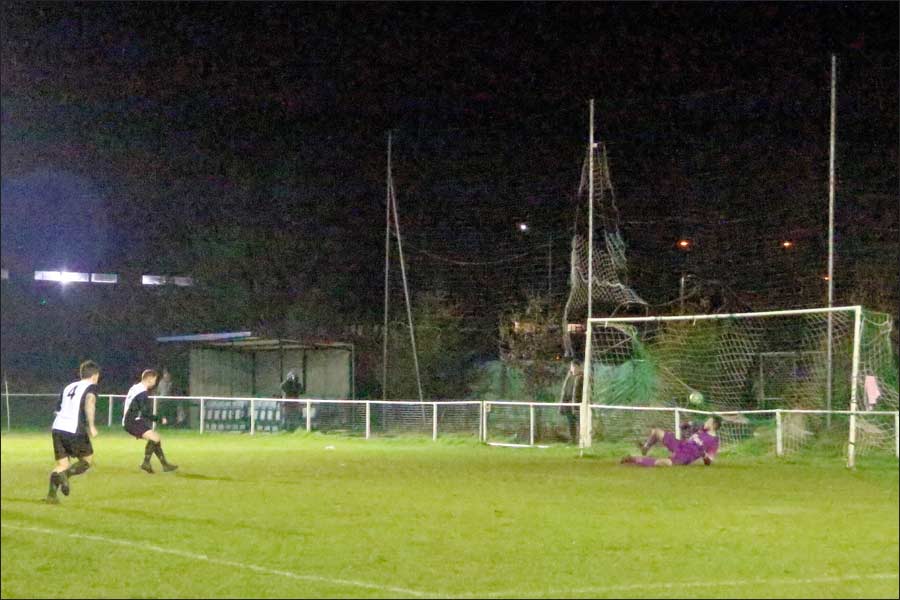 Mead gets a penalty hat-trick and its 4-3 Berko

Extra time started as like all the game, ball through tackle, penalty to Berko and Mead converts for his penalty hat-trick. 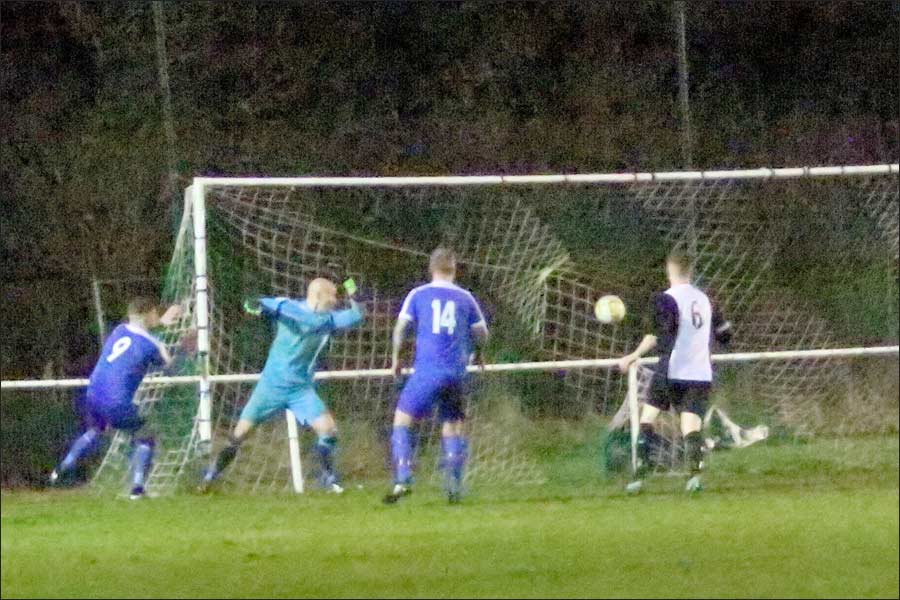 Jets almost level it to 4-4

There it stayed but Jets did try. Then in the second period a clear hand ball was ignored, I guess penalties were on on Jets agenda and Beardsworth muttered it was hand ball with added adjective and half a chance taken to nail him up went another red. Now it was pointed out that he could have had a yellow earlier, pity he didn’t because clearly that poor decision may have calmed him for not getting a red !! More marks away so now well into the dreaded report area that I doubt get a read anyway. 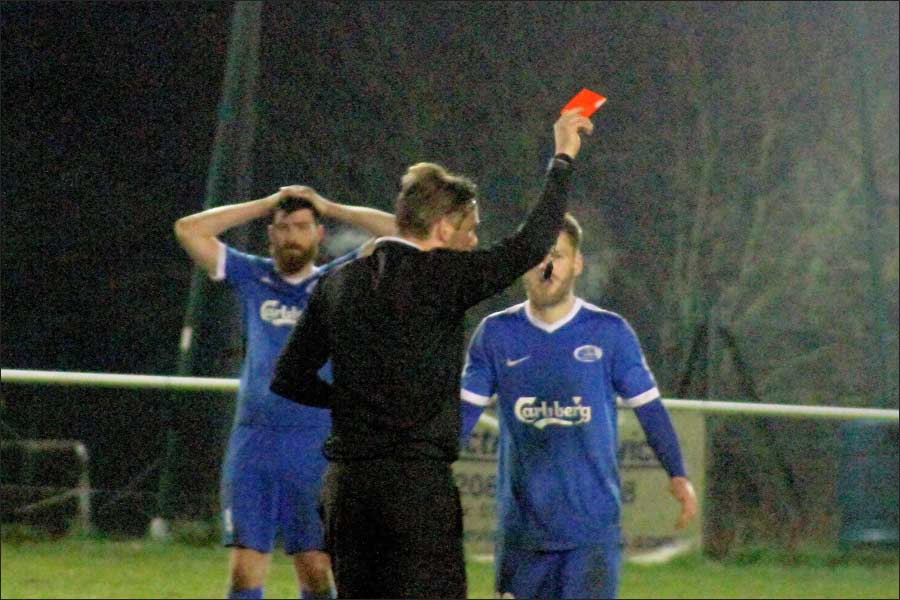 The game was over. Jets gave up and only Will Baker stood between a cricket score as Berko ran out 3-6 winners and go to Letchworth in the final.

This game seems to have caused bad feeling between old friends since the first scheduled game, so I end by saying good luck to Berko in the final, they were awesome in the fight back and credit to their players. They never gave up and saved then won the game, but for us there were too many black and white shirts in the end for nine man Jets to hold the one way tide against.

It must be pointed out Jets were second best in the FA League table on discipline before this game with only Holmer Green better, so something or someone caused the shift in behaviour. We all have our own opinions on who and why.

Jets man of the match. Will Baker in goal, by a mile.