Lots of Positives In Defeat

Jets fell to the third and final “top three” encounter losing to Hertford Town 1-2 in a thrilling encounter at the Boundary stadium. The match referee was at pain to congratulate groundsman Graham O’Brien on the pitch, following all the rain, and getting the pitch playable.

The last three games for Jets have been Cockfosters 3-3, London Colney 1-2 and Hertford 1-2, so any clues on who of the big three will take that title, then there are few clues on our results, but what was clear is that Jets are getting stronger and competing if not quite matching the quality of the budget championship chasers.

Realistically I can’t see the title being anywhere out of that three so we have to hope we can now get into the business end of the season and get past that safety post in what is a very, very tight bottom half of the table. 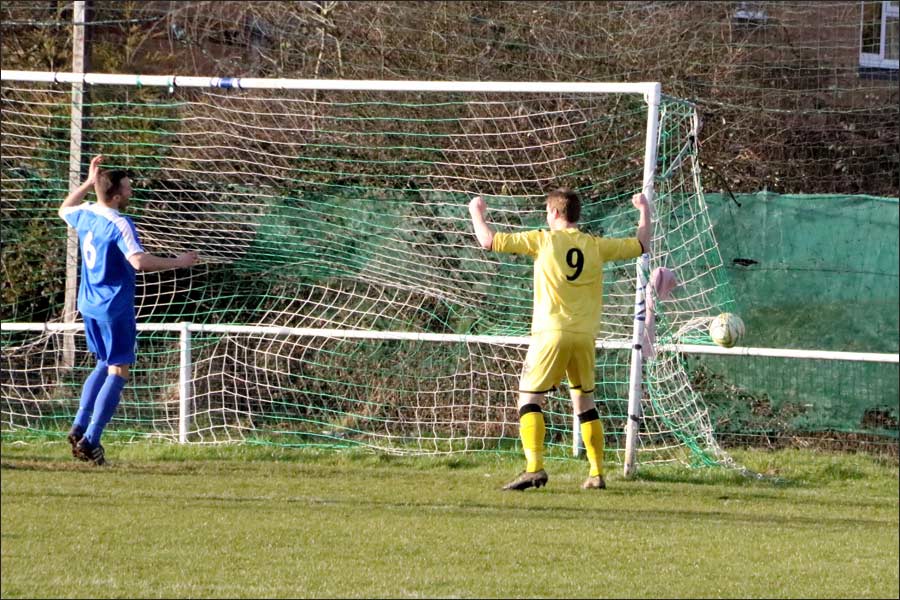 A wicked deflection puts Jets one down

Jets in fairness were hardly in the first half except chasing shadows and working extremely hard against a classy side playing controlled excellent football. Hertford look well coached and definitely a championship capable team. 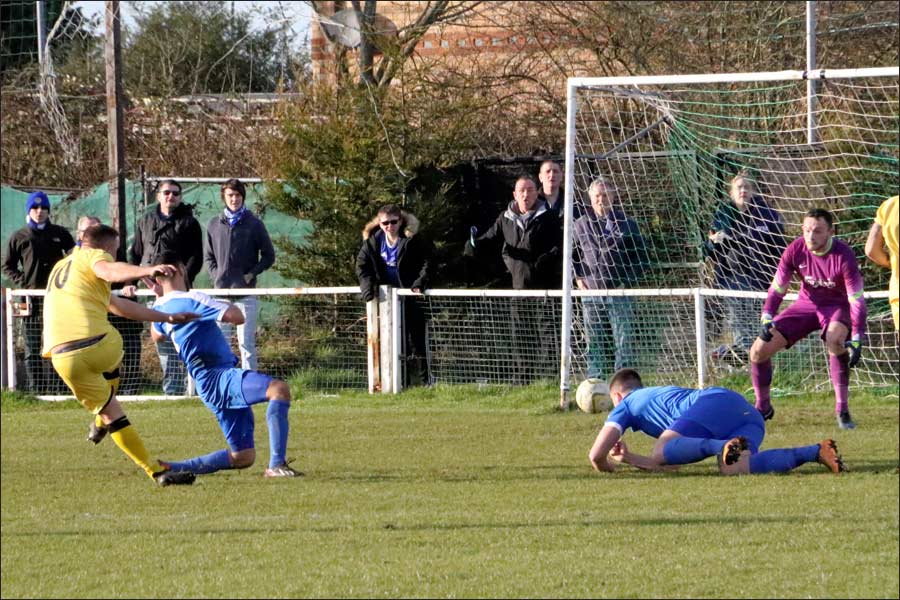 Hertford break through again and score their second 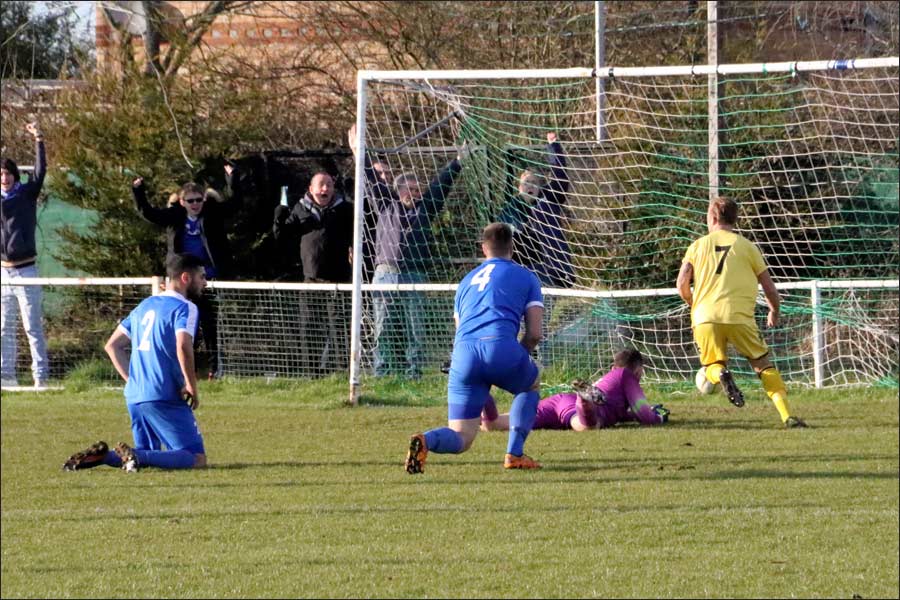 Jets didn’t have any luck even in the shadow chase but that’s often the case that top sides make that bit of luck and two goal Wade, the league’s consistent hot shot, eased the title chasers into the comfy lead in the first half, one courtesy of a massive deflection to lay on the chance and the second when a defender managed to go flat on his rear in the conditions.

Big first half penalty appeal for Jets – but correctly not given 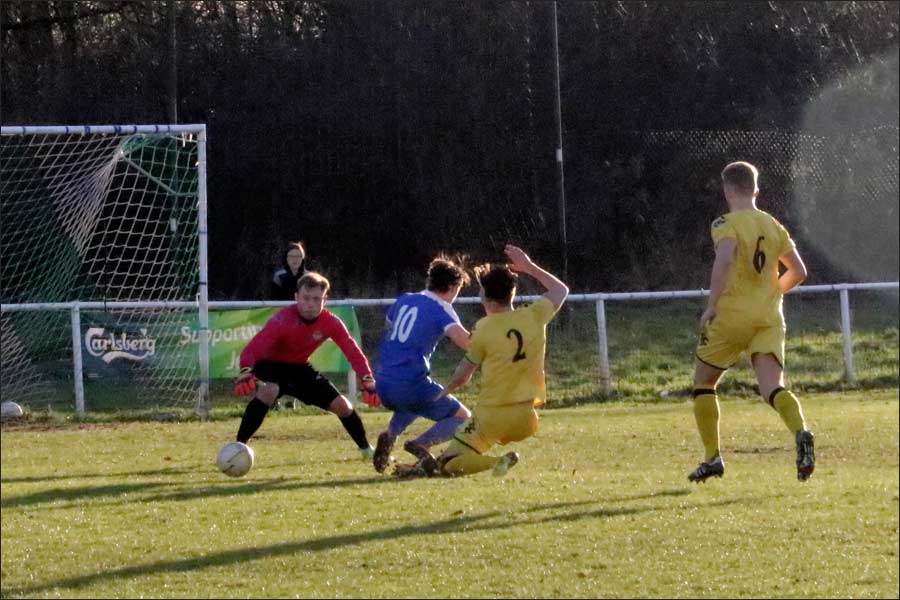 Jets really only rarely countered on the break and most were weak long range shots or high into the adjoining farmer’s field. The one ray of hope and controversial decision was the failure of the match official to award a penalty to Luke Wells following what looked a take down when in on the keeper 1-on-1. Photo evidence, however, shows it was a perfect absolutely superb last gasp tackle by the defender and the decision was correct. 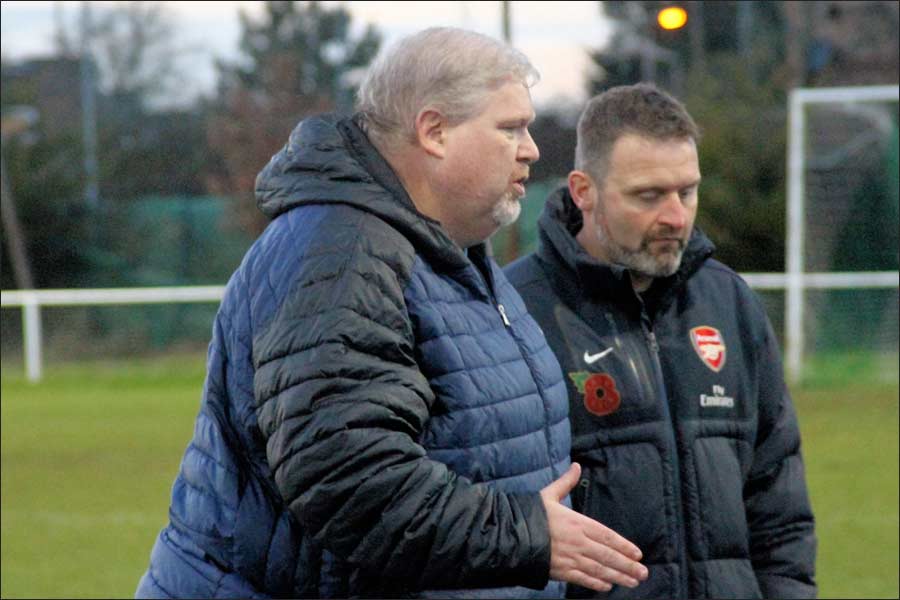 Lee and Kev plot the second half changes

Half time and Jets were happy to be just 2 down and half in the game still against a stunning football team and display by Hertford Town, but massive credit to Jets, they worked very, very hard to be only two down.

The break was shockingly match changing. The staff were positive and trying to generate a passion for the second period, and one reaction was to make a change with Brad Thompson coming on in the centre of Jets defence and the tide really changed for a different pumped up Jets side.

Excellent saves under pressure from Will Baker

Luke Beardsworth also joined the fray and Jets were going for the title chasers throat, fully competing and now playing much better football and stretching the visitors back. Now it was Hertford relying on the counter and when they did it was always threatening and fast but they found keeper Will Baker ready and waiting, making a couple of outstanding saves to hold Jets in the match. 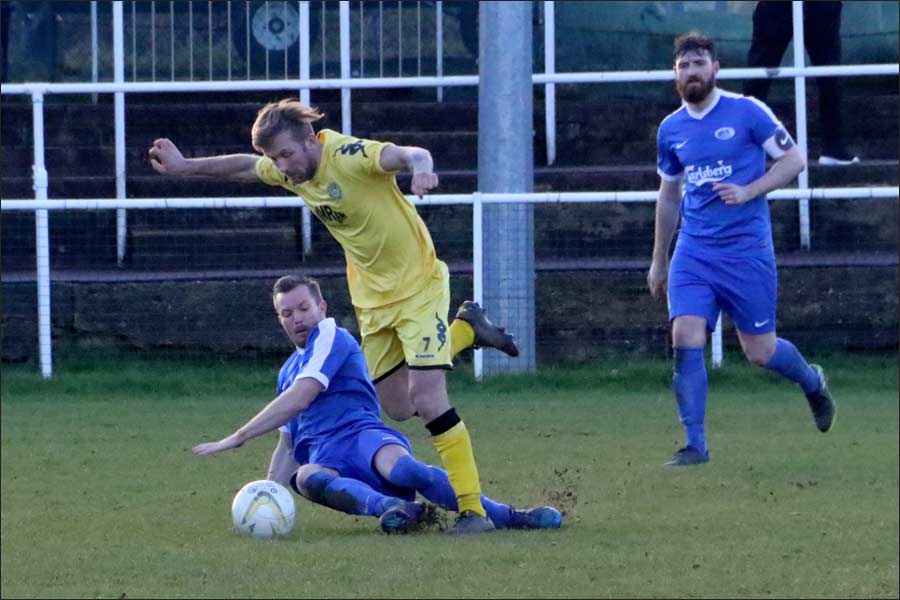 Wazza was a 90-minute inspiration

Warren Gladdy called from the reserves, due to Jets crippling injury and not available list, was his old inspirational self; imaginative and a real class above and probing Jets into the match with menace. Now joined by Beardsworth it was dual pronged and Armstrong, Wells and Warn were buzzing on the supply chain. 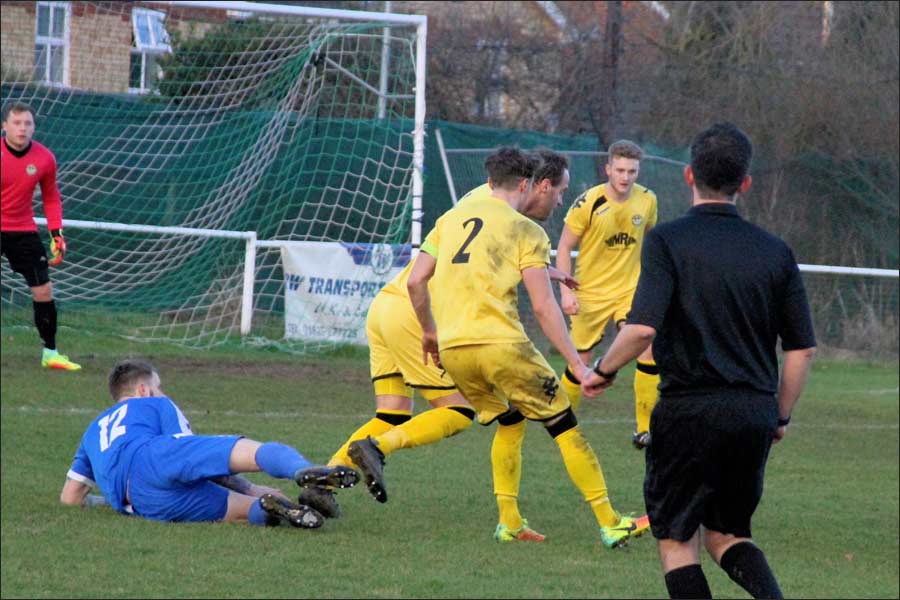 Beardo flattened by three defenders but no penalty given

Match officials can often please or anger and Jets today deffo felt they got none of the tight decisions and a few not so tight, but having said that he got the first half one right, he badly got the second half one critically wrong as no less than three defenders tried to stop Beardsworth and with the official well placed the photos show we can only presume he was watching one of the three when the wrong one (for us) pushed the Jets striker to ground and astonishing no penalty given. 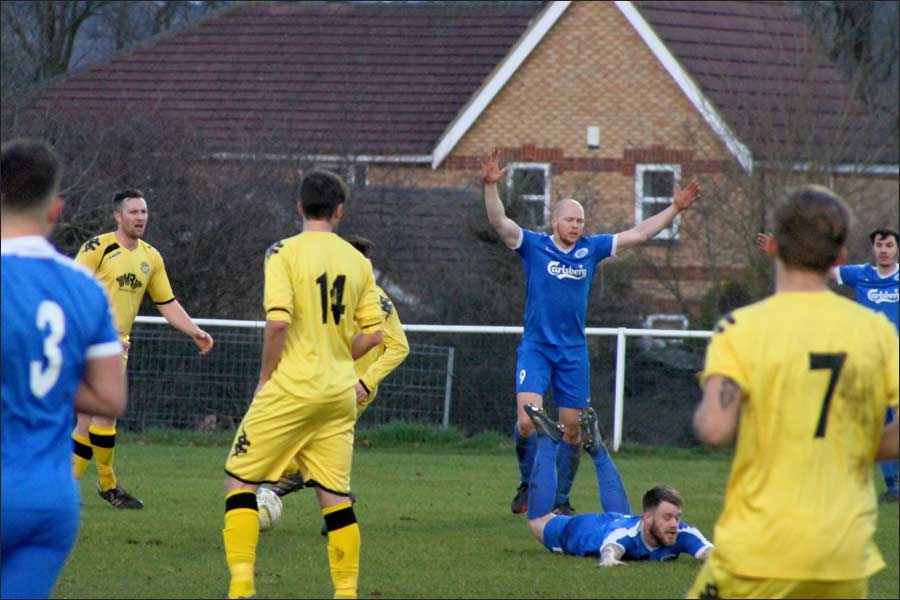 Beardo flattened for the penalty

No mistake from the spot for Sim. 1-2

Jets still pushed and it was the Hertford keeper now playing out of his skin to keep a clean sheet but he had no chance with a hammer strike from the spot by skipper Sim Armstrong after again Luke Beardsworth was clearly flattened. In fairness to Hertford, no protests. 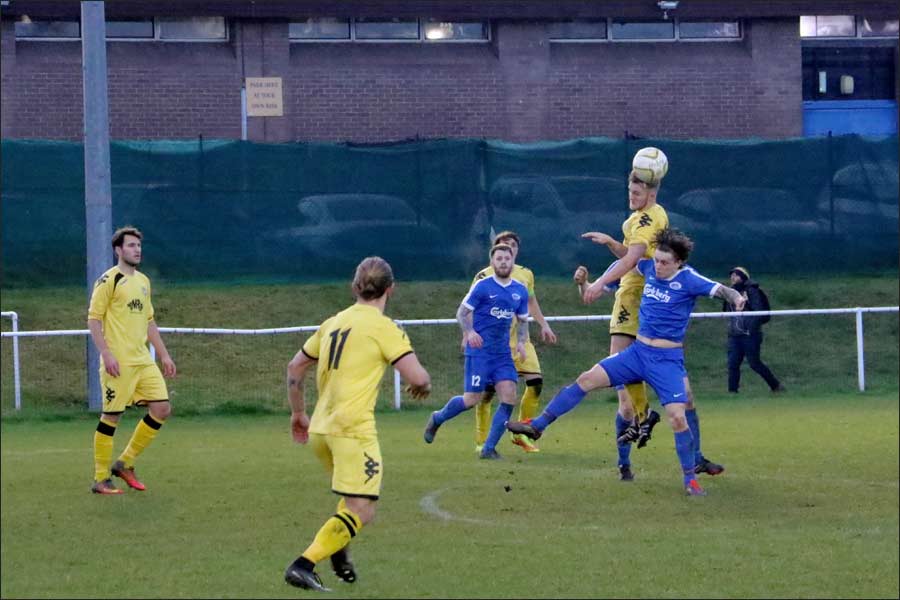 Just over from Beardo as Jets pushed for the equaliser

It was a very nervous last ten for the title chasers who were now trying to play the clock down and pleading for the full time whistle.

The honest summary is that Jets were out played for one half but were gutted to get nothing from two down in the second, and as a Jets man I clearly think we deserved something, but accept that we lost to a class act team.

Outstanding save from will Baker

Jets Carlsberg man of the match was competitive. Will Baker was solid and pulling out all the stops when needed, Sim Armstrong was very strong and held Jets together well while under long periods of pressure in the first half. Warren Gladdy was a pure class act and looked every bit as good as our visitors in the first half chase, reading their play better than anyone and tackling like his life hung on it, not a part of Wazza’s normal game. The decision went to Gary Warn who worked and chased and bullied and ran himself into the deck for his side.

The compliments are there, ‘a battle in the second half by a much improving Jets side’ said the Hertford boss, you shouldn’t have lost the London Colney camp said last week, and Cockfosters complimented the fight from us, but only one point, so now we have to learn to finish the job and get a bit more back.

Make no mistake there is little criticism, they are giving their all, just need a bit of luck, a bit more of a squad size and the same effort and the team pulling together and giving that extra bit of time and attitude to turn this around. 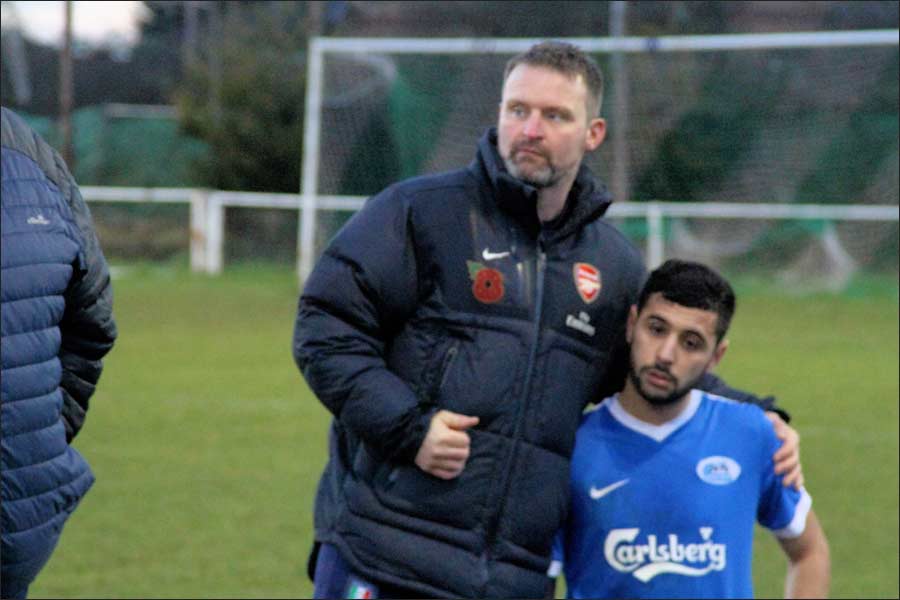 For Jets manager and Arsenal fan Lee Stedman, it just wasn’t his day for the boys in blue !!!! 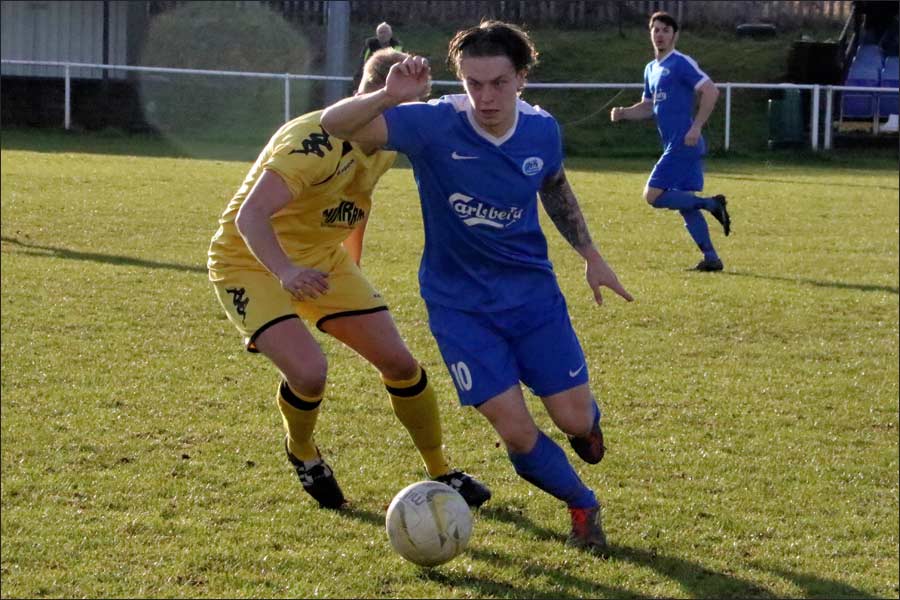 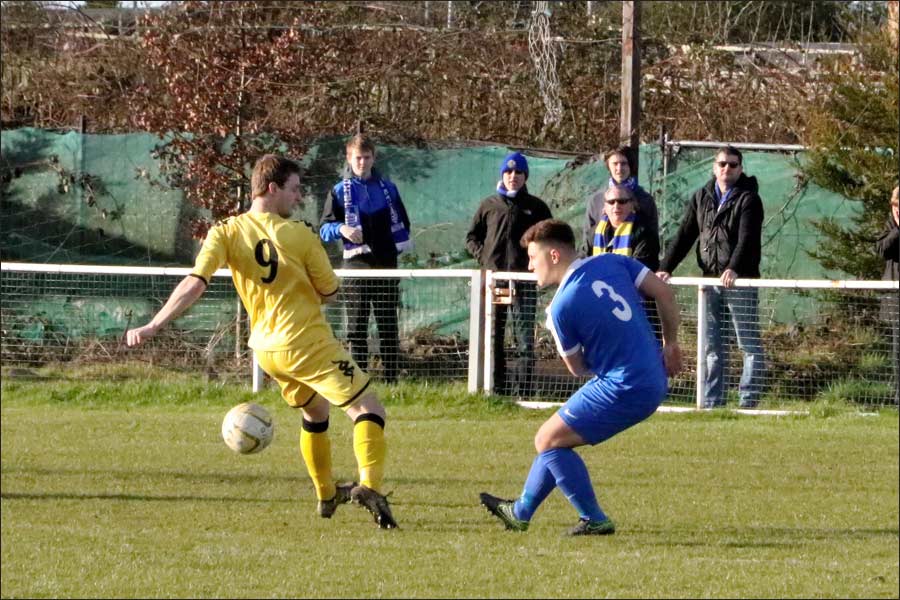 Sim was a powerhouse for Jets 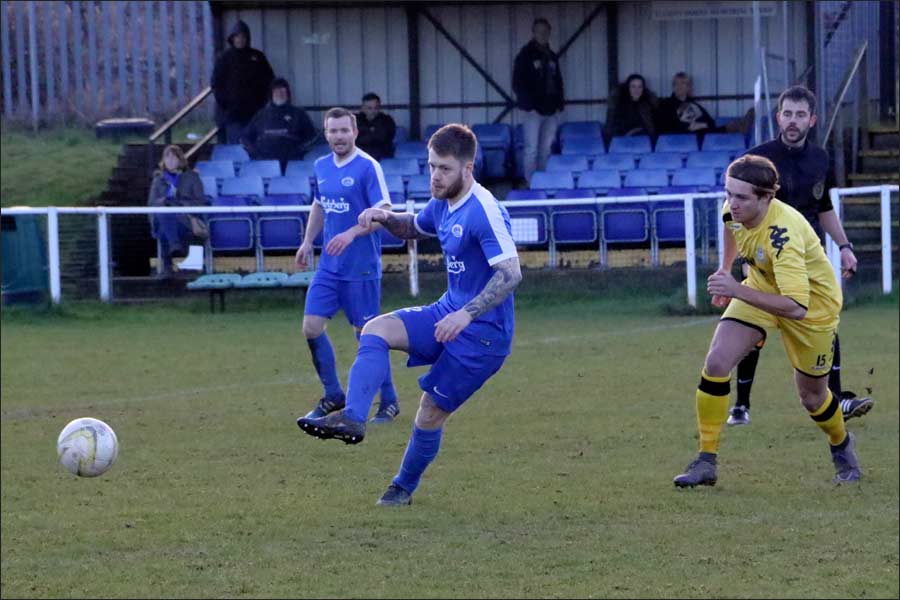 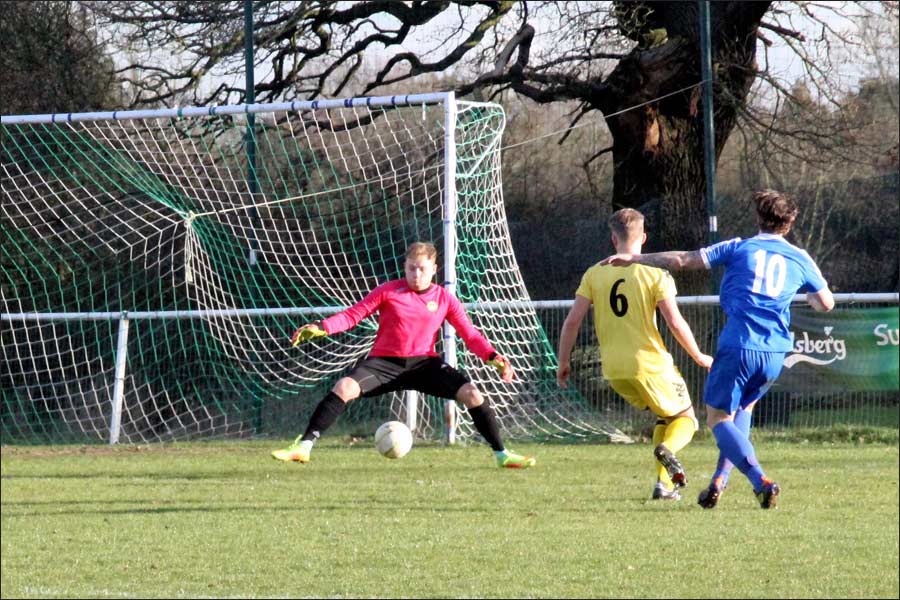