Jets clinch their first win since remembrance weekend in a stunning first half onslaught before a more subdued second period.

The day started in the dreadful way that has become normal lately, with withdrawals for a variety of reasons and at incredible times, some after the meet time in a most unacceptable way for this level of football.

Jets had twelve of the first team squad unavailable and incredibly four withdrawals on the match day and one after the meet time !!

Stotfold it seems had equal problems and one member of staff asked who are some of these players, where is everyone today ? So a sign of the time if you are struggling it seems. 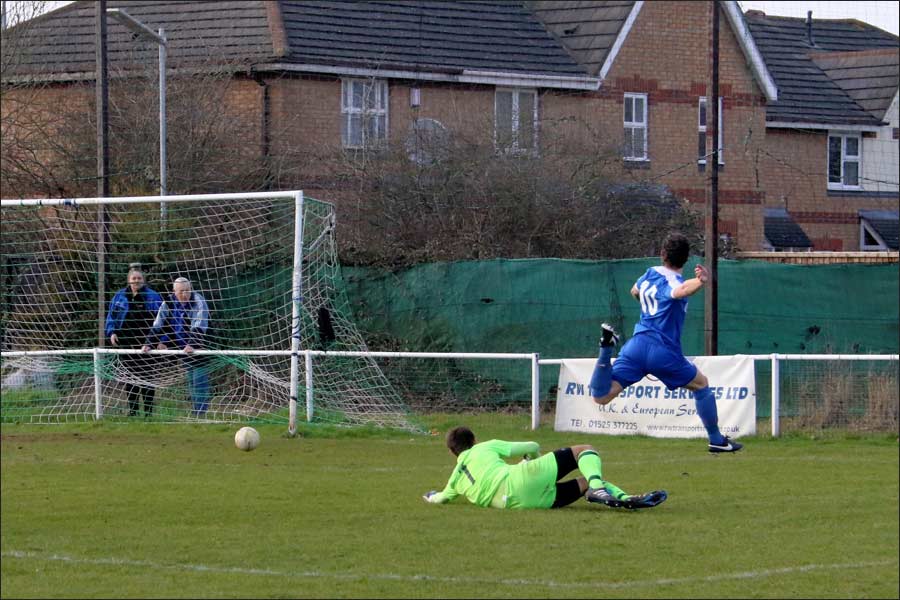 Jets put on a stunning first half that was irresistible, attacking at reckless will at times, and with Luke Wells in the mood to finish his chances Jets built a big lead fast, then built on it. 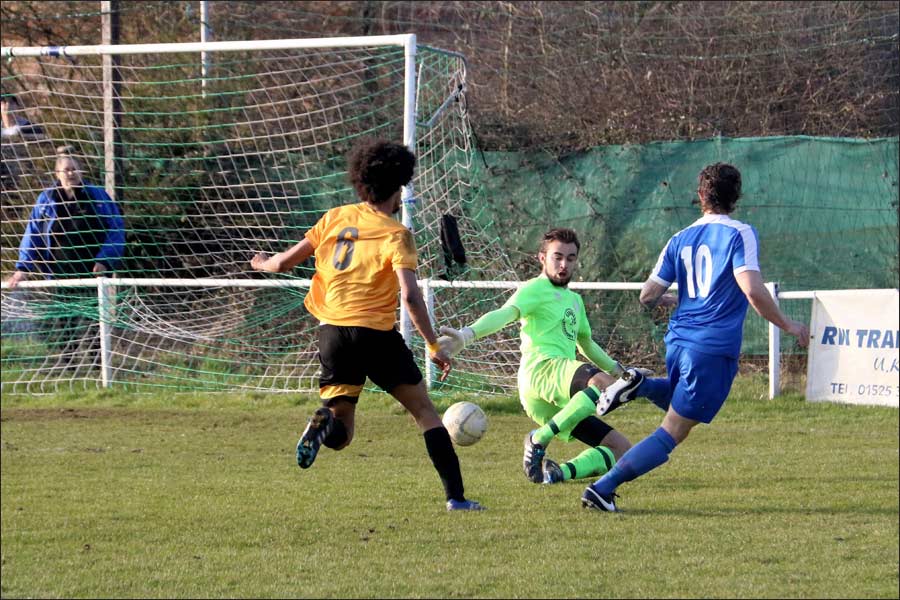 Two almost identical goals with cutting through balls sent Wells clear in the 10th and 26th minute and with stunning calmness the young forward slotted past the advancing keeper. 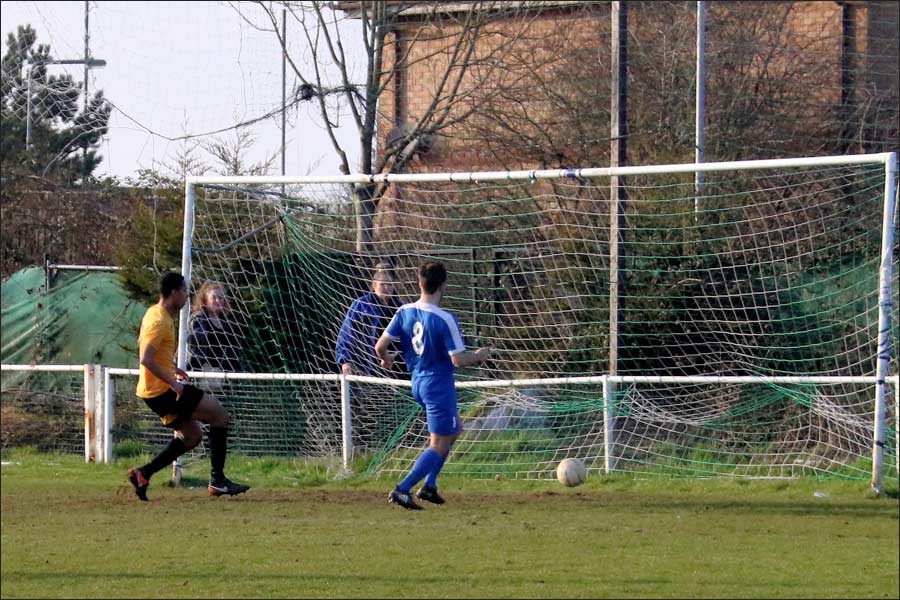 Luke Jones finishes to make it 3-0

Stotfold were offering little resistance at this point and when Hodges had a long shot that split the defence it found Luke Jones unmarked for the easiest of touch ins 3-0 (35 mins).

A brilliant save from the Stotfold keeper denies Jets

Queue the penalties people were saying in nightmare reference to the diabolical refereeing display a week or so ago against Berko that saw Jets beaten from three up, but this time with the half running out it was Sim Armstrong who all but finished the match, heading home from a corner 4-0 (42 mins) and that was the score at the break in what was a super half for Jets. 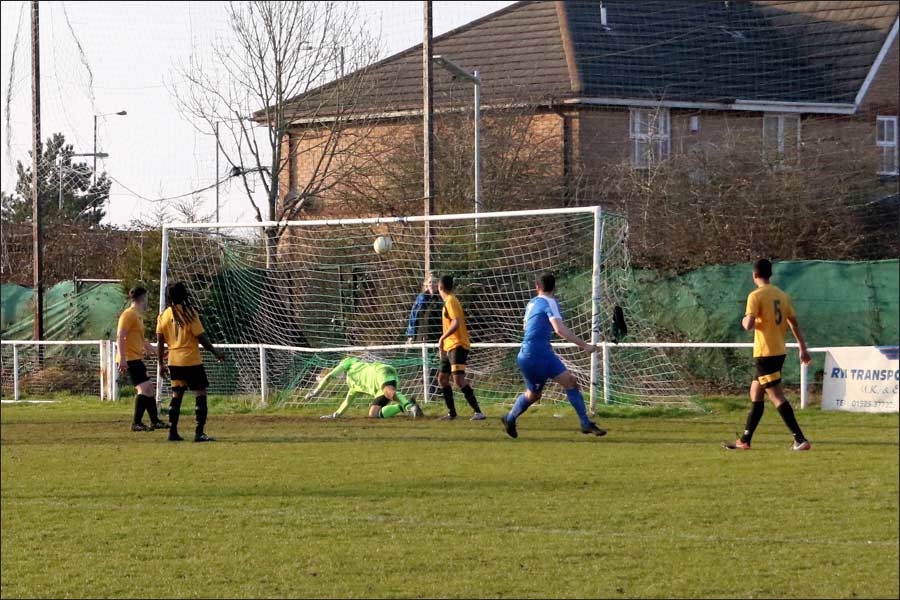 The talk was positive BUT cautious after what had happened and the rollicking coming from the away dressing room was ringing through the home team wall.

Jets wobble and Stotfold pull one back

Jets went a bit ‘wobbly’ over cautious knowing the points were critical as we had sunk into the relegation dog fight. Stotfold really, in credit to them, came back at Jets and had most of the attacking possession in the second period. It was no real surprise that they pulled one back (61 mins) and they worried Jets more than a little. 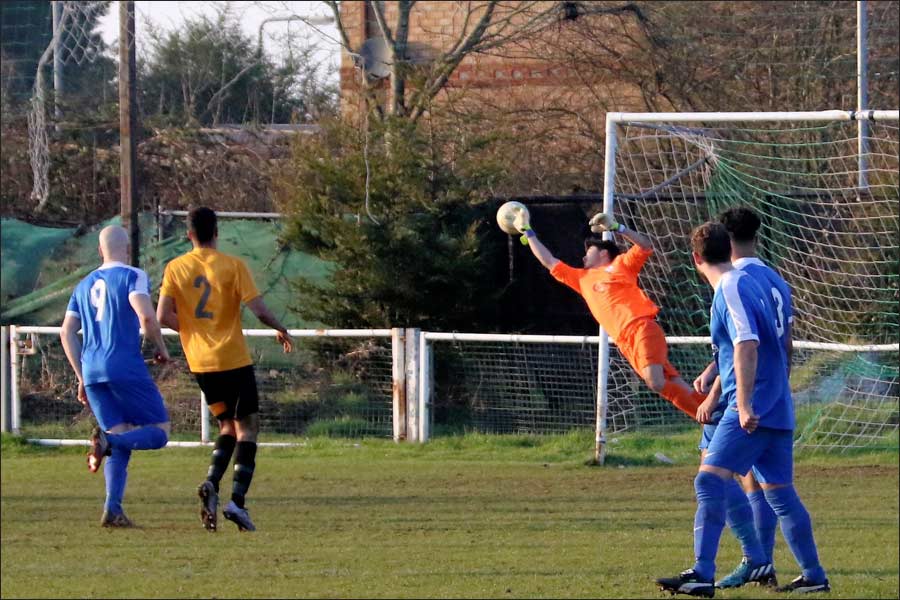 The returning Rob Partington makes a good save

Rob Partington put his hand up and stepped in for his first game following his horrific injury in the FA vase back in September when Will Baker had to pull out injured, and each time he went into close combat all around the ground held their breath. After one slip, two saves and one brave one at the feet of two forwards everyone relaxed a little. It was a great a gutsy gesture standing in to help his team and it was much appreciated.

Another cracking save from the Stotfold keeper

The saves of the day went to Stotfold. A dipping deflected shot was magnificently saved in the first period and a full length in the second denied Jets more before, on 80 minutes, Luke Wells completed his hat-trick and Jets 5-1 lead all but finished the comeback dreams of the visitors.

Luke Lloyd (No.4) hits the post with this 25-yard free-kick

Luke Lloyd was denied when a stunning free-kick hit the inside of the post from some 25 yards and Hodges’ rifle shot was deflected for the corner. 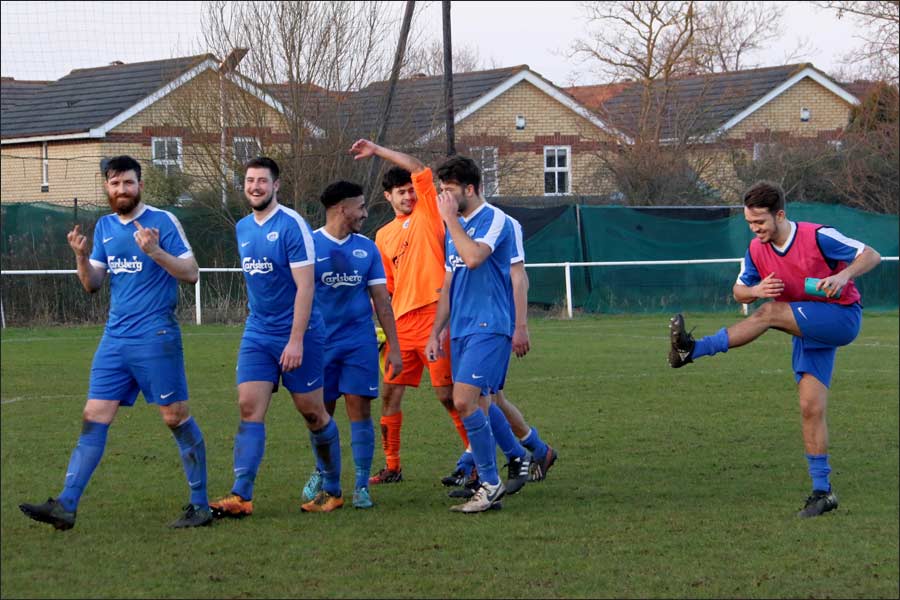 All smiles for Jets after a really good performance

Jets played out the game for three much needed points and one big boost for the confidence. 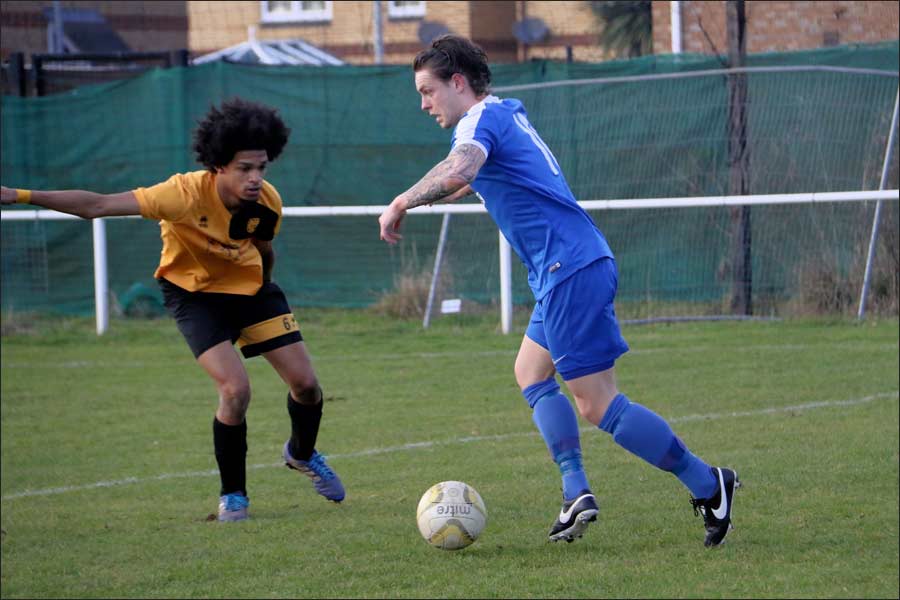 Man of the match went straight to the hat trick hero Luke Wells, but today he got a fruit shoot while a crate of the sponsor’s best was happily delivered to the players treatment table In a show of utter pain relief for all involved. 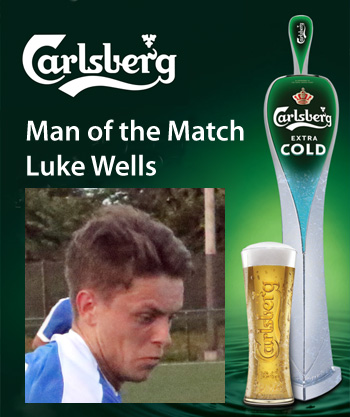 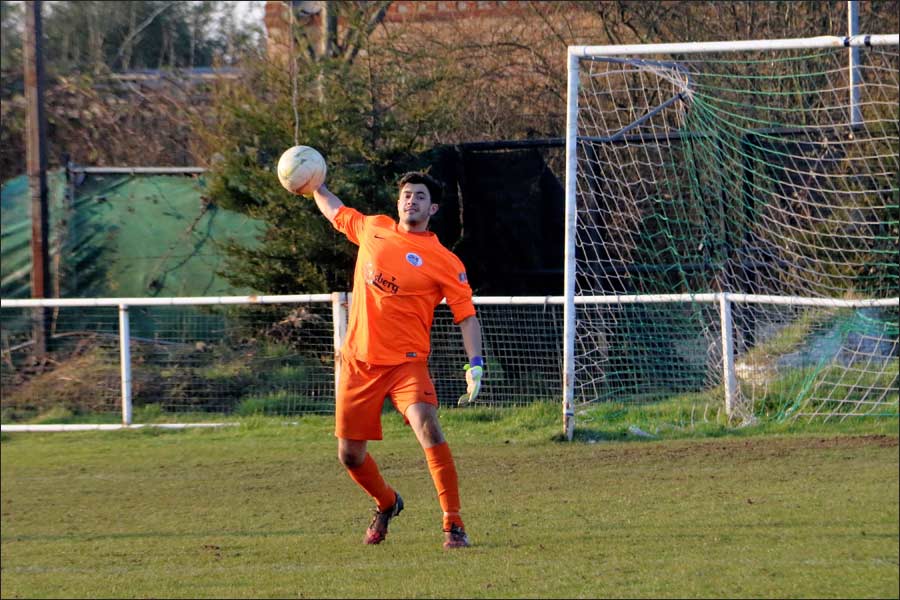 Rob in the thick of the action 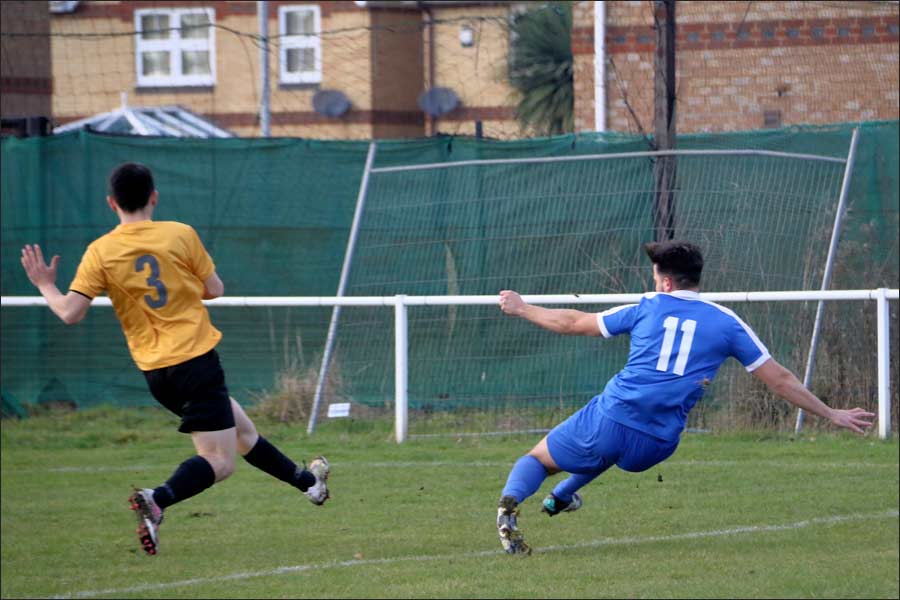 Dangerous crosses from Hodges provided great support to the forwards 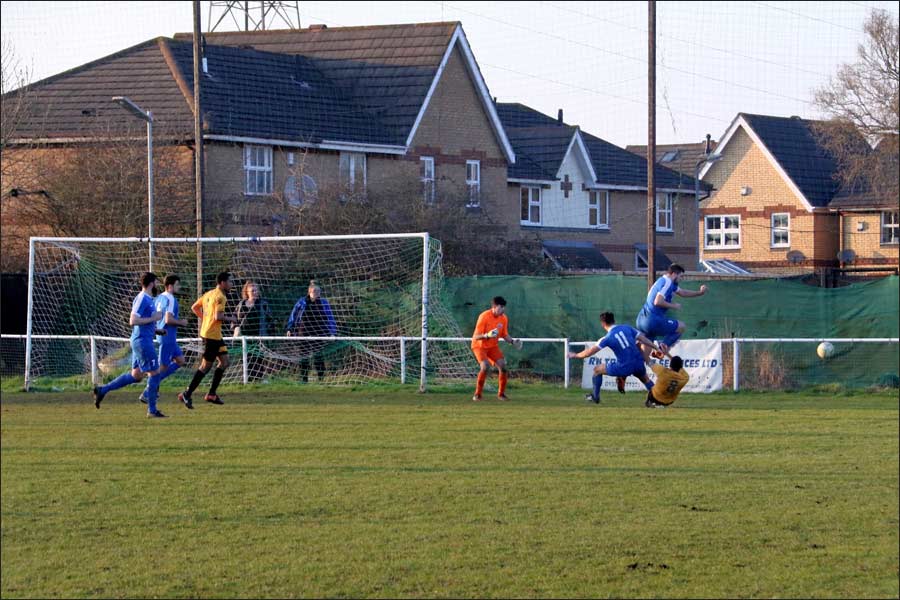 Jets dug in to protect their lead 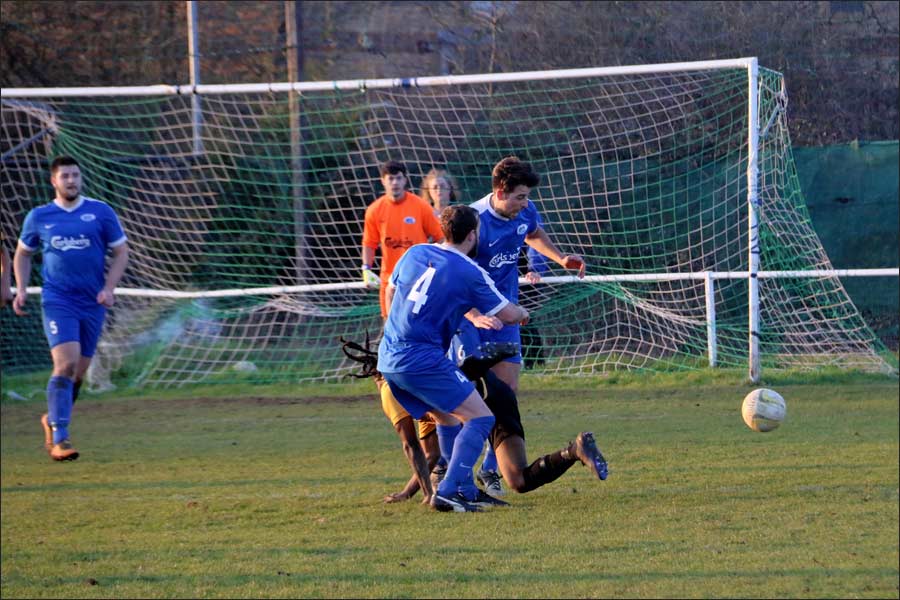 It got a bit nervous at times despite the 4-1 lead – we wanted this win!