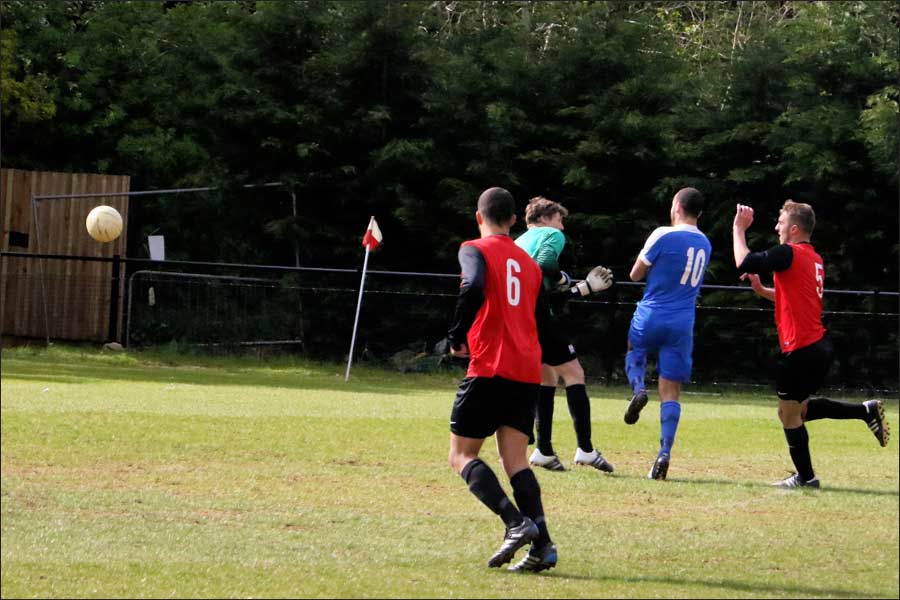 Jets landed for the summer completing their league programme at Mickey Hazard’s in form Hadley, playing Jets for the first time at their own home having been able to get the work and permission done for the deserved return home for the first time since the clubs Herts county league games.

Jets suffered the almost normal withdrawals from people but Jets are growing again now and it was time and place for Wazza’s kids to earn their spurs and show how far and well they have progressed under Wazza’s excellent coaching. 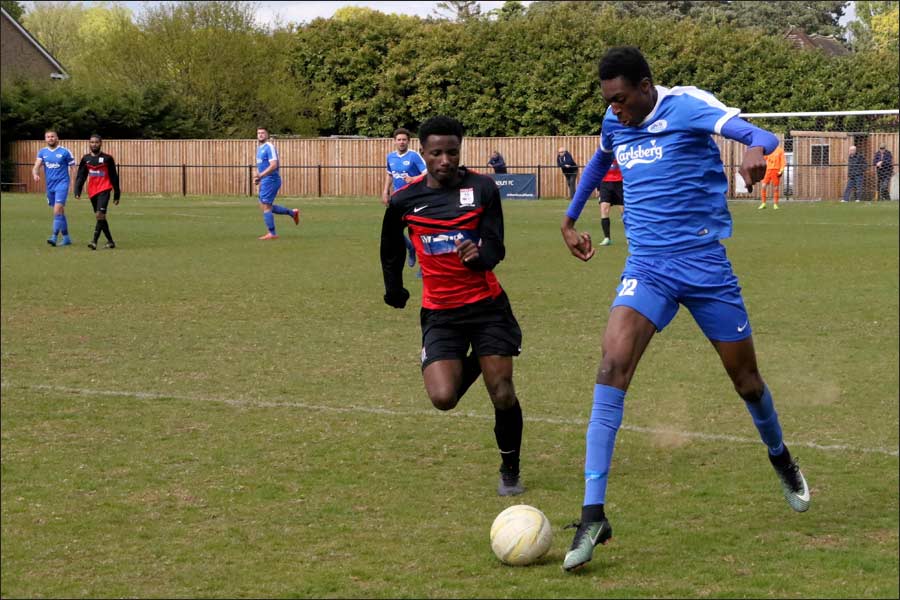 Four of the pups stepped up today and Jets and Hadley both safe seemed to forget there was nothing at stake except pride and they both went for the victory. 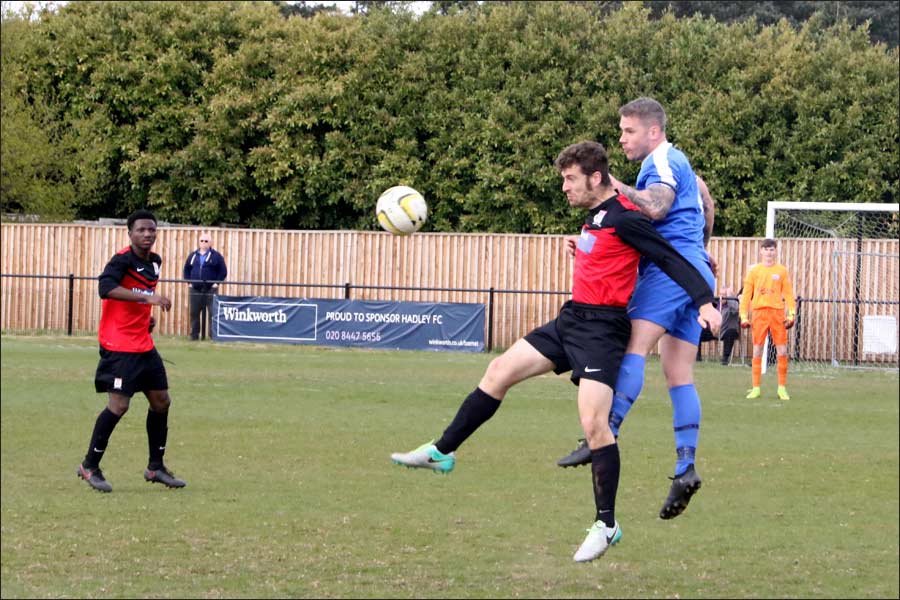 Big Jack was a powerhouse in Jets back four

Jets set up a tighter rear guard to help protect young Billy Hayward on his debut in goal and Jack Robertson was a man mountain in the back four while Liam James mopped up the through balls. 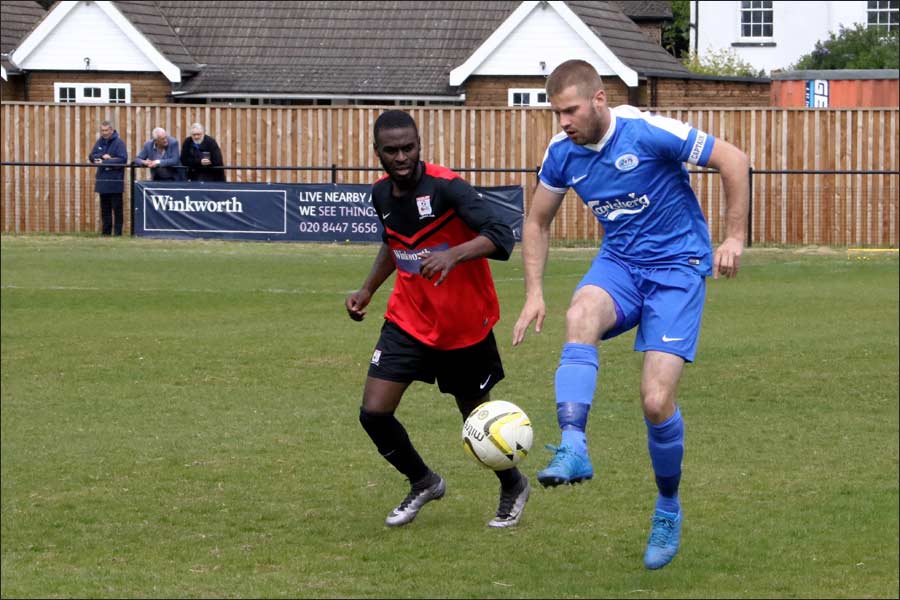 Jets, skippered by Scott Pugsley, wanted to contest every ball and throw-in as the loyal skipper gives his all for his club, and it’s clear the blue heart runs deep, the type of commitment that is fundamental to the club. 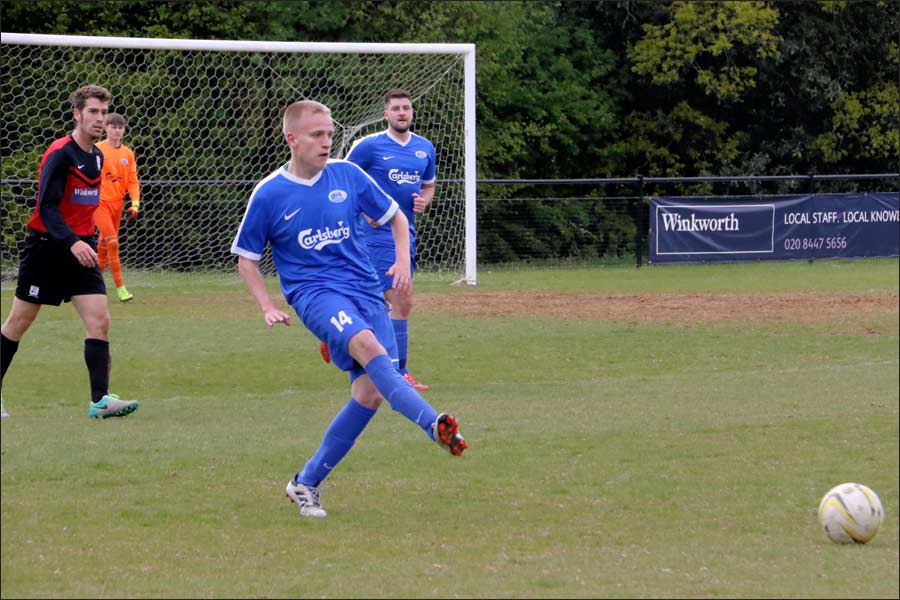 Jets lost John Smith following a reckless challenge early on and without the screams, rolls, and howls the skilful midfielder was lost to the hip injury. On came another Warren Production, Dylan Eady, and wow, what a skilful performance the blossoming youngster put on for a first team debut. 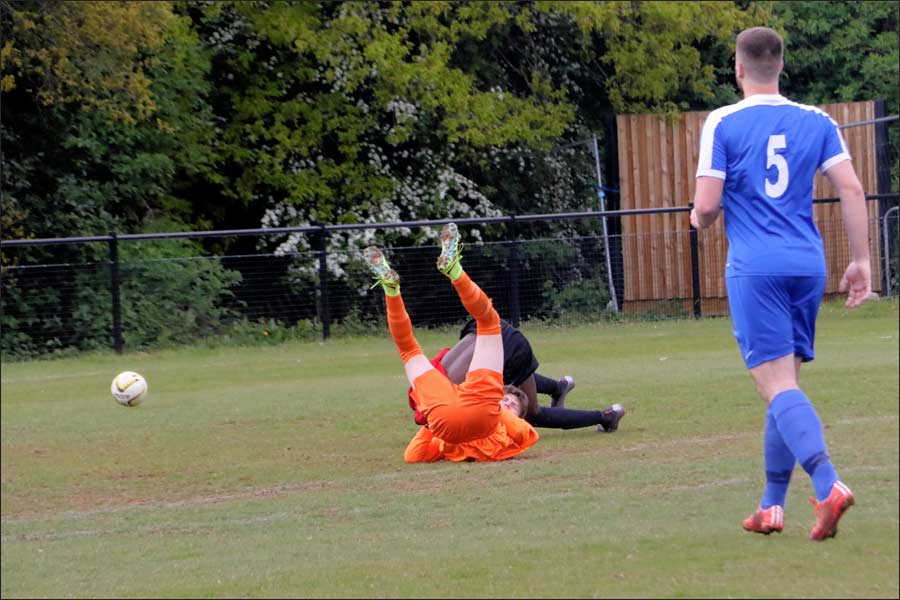 Big penalty appeal by Hadley but nothing given

Hadley had a goal ruled out, no dispute there as way offside, then went mad when Hayward and their forward had a coming together screaming for the penalty, while Jets were equally screaming for the foul on the keeper but either way it stayed 0-0 until David Martinez opened the scoring, poking the ball past Hayward for the lead and it stayed like that till the break. 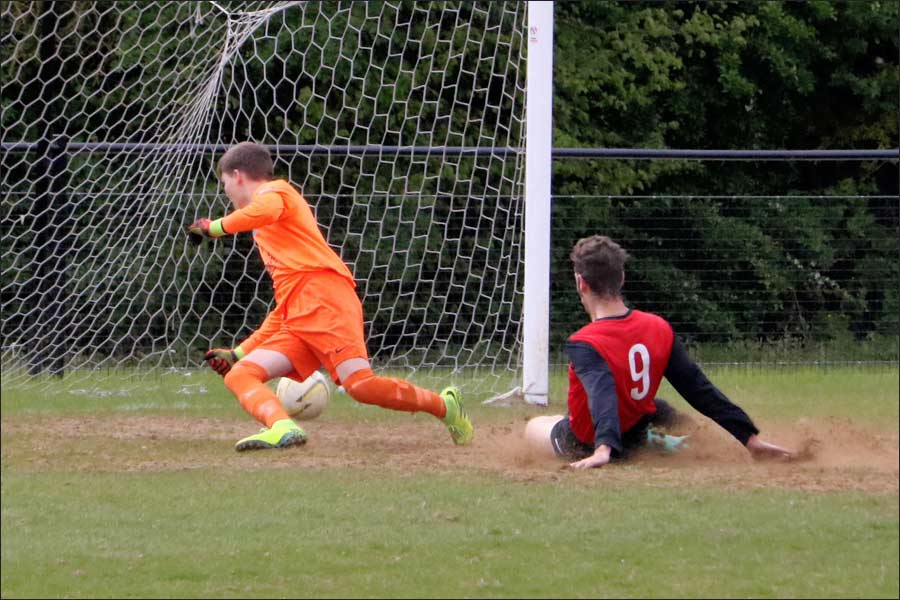 The big game changer was tactical as Chris Blunden had little support in the first half. Chris, along with John Smith, has been a big part of Jets changed fortunes as the pair, along with the team, suffered just one league defeat in the final eight games, and that was over the Easter weekend when almost the whole lot flew to the Malta bop ! 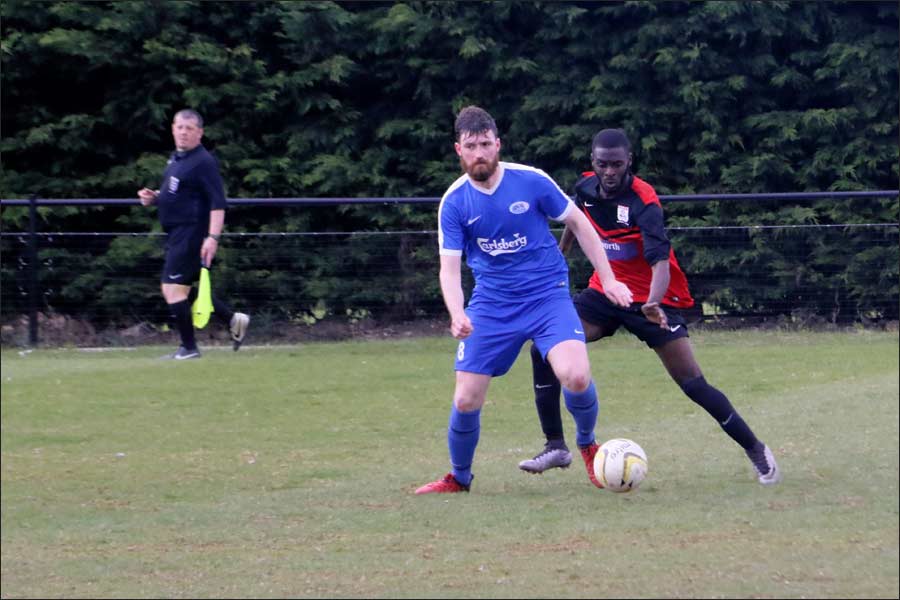 Sim was pushed up to play alongside Chris Blunden

Sim Armstrong was pushed up to twin with the lonely striker and Jets were far more dangerous and attack minded and went at Hadley in a far more meaningful way.

Chris Blunden beats the keeper to level it for Jets

Jets levelled when Chris Blunden swivelled and shot and it shook Hadley and a second by the striker, his third in two games earned the points. 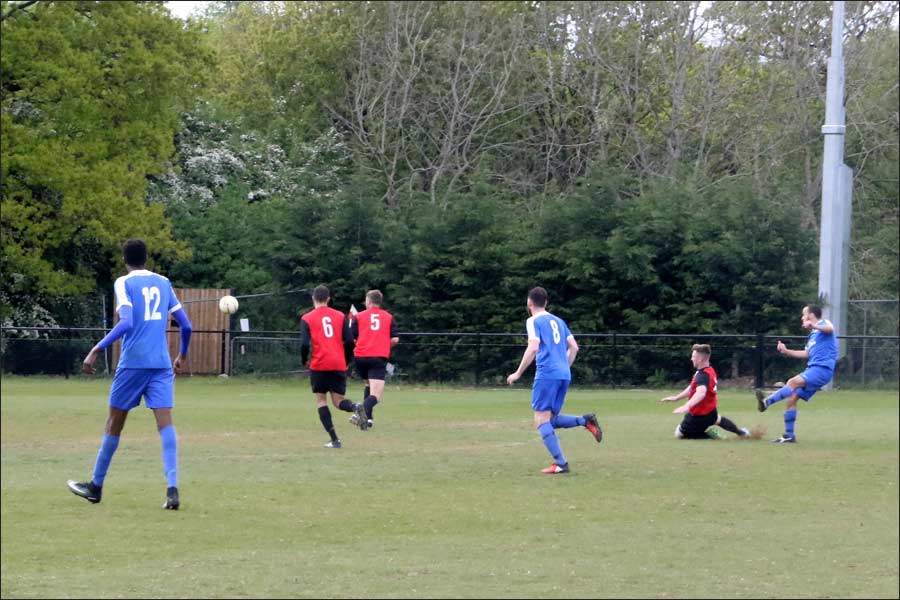 Chris shows he is a natural goalscorer, striking his second to give Jets the lead

Jets had their scares and three stunning saves by young Billy Hayward kept the home side at bay and gave Jets the perfect summer ending to the league campaign. It’s always good to get that last day win. 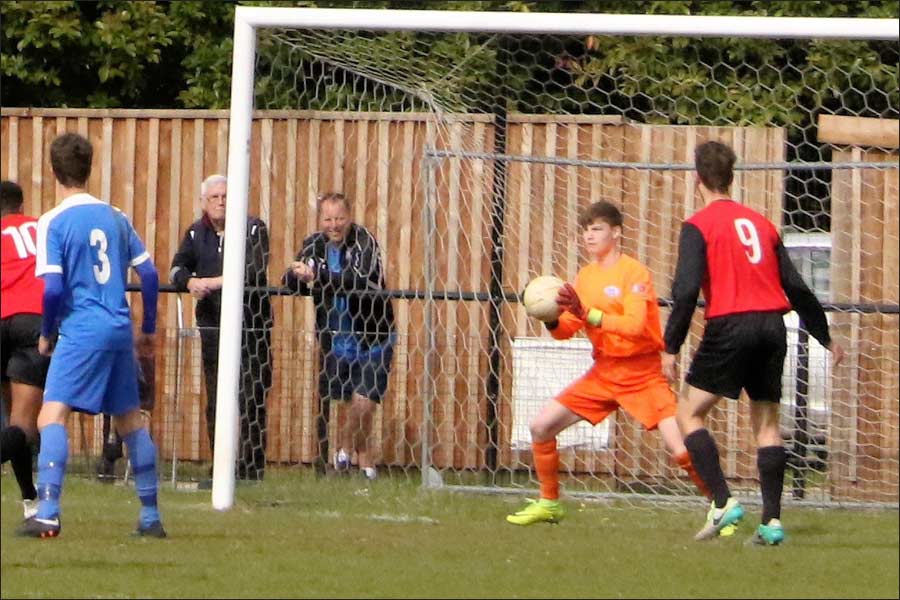 Man of the match was left to the three hecklers and they proved not to be the muppet show with the excellent decision to give the Carlsberg present ( but not the beer I’m afraid pup) to Billy Hayward on his debut, just from Dylan Eady on his !! What a credit to Warren his four were today. 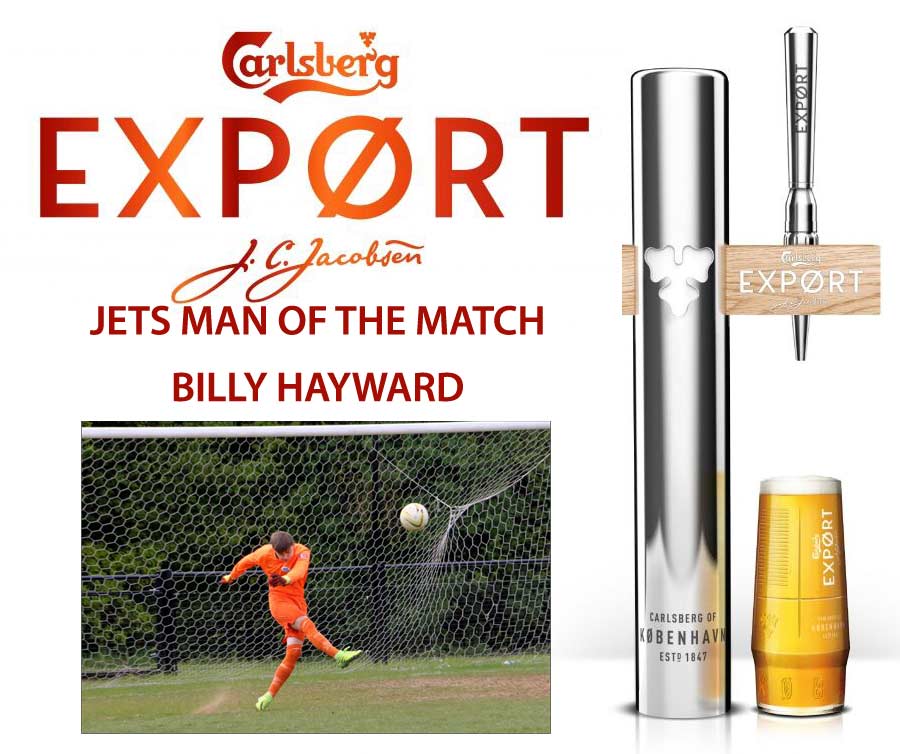 So the season ends for much-changed Jets, at times a struggle and at times fun and promising, some new friends made and unfortunately some good friends lost, but that’s life in sport and football. 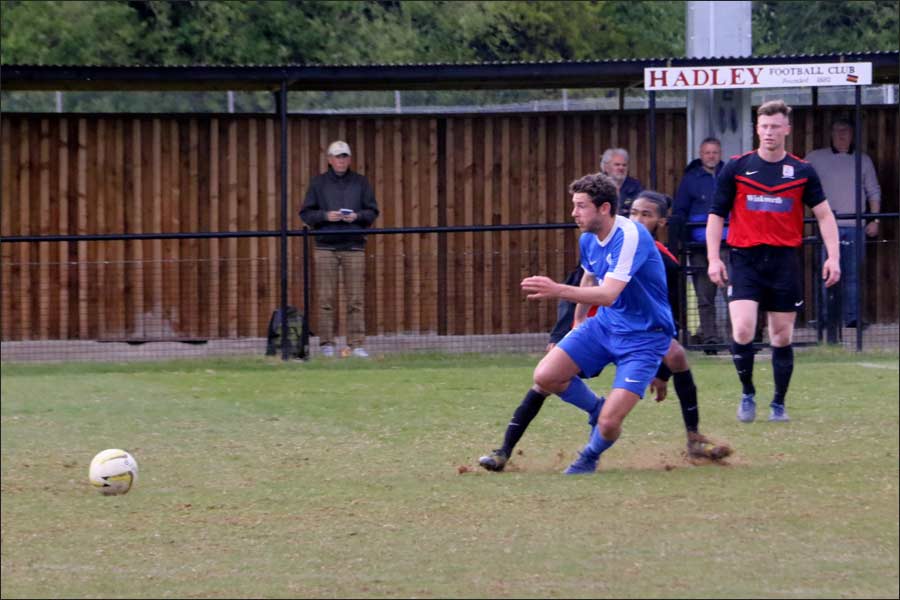 Leigh Stevens – Been a talented and hard working player for Jets

Big thanks to Leigh Stevens in his last game for us before going back to Bournemouth University. A most competitive and lively player willing to support everyone, a real workaholic on the pitch … good luck, thank you and come back soon!

Jemel back in Jets action

A safe mid-table position would have been the early aim for Lee Stedman and his staff at the start, but they also know that with just a little more commitment and the availability needed at Saturday SSMP and above level they really could have achieved more, much more but for various reasons some just would not commit enough to that high match play season that Saturday leagues bring. Hopefully, the climb and improvements will show people what is possible as a starting point.

Reserve / Dev league
The season finished Sadly at Risborough Rangers when a very serious injury to a home player led to the game being abandoned just before half time.

The emergency services response was far from fast and the referee called a halt as the player could not be moved. The home side led 1-0 and Jets, whatever the committee’s decision with either 0-0 or the 1-0 will not be contesting to replay the game out of total respect for the lad and club.

So just two matches left in the senior part of the club, both West Herts games, on Thursday our vets play in the cup final at Hemel Hempstead FC in a 7-30 kick-off in the Webster Cup Final, then they must play Engineers in the final league match in a winner takes all game for the league title probably just two days later after three weeks off, which is just madness. 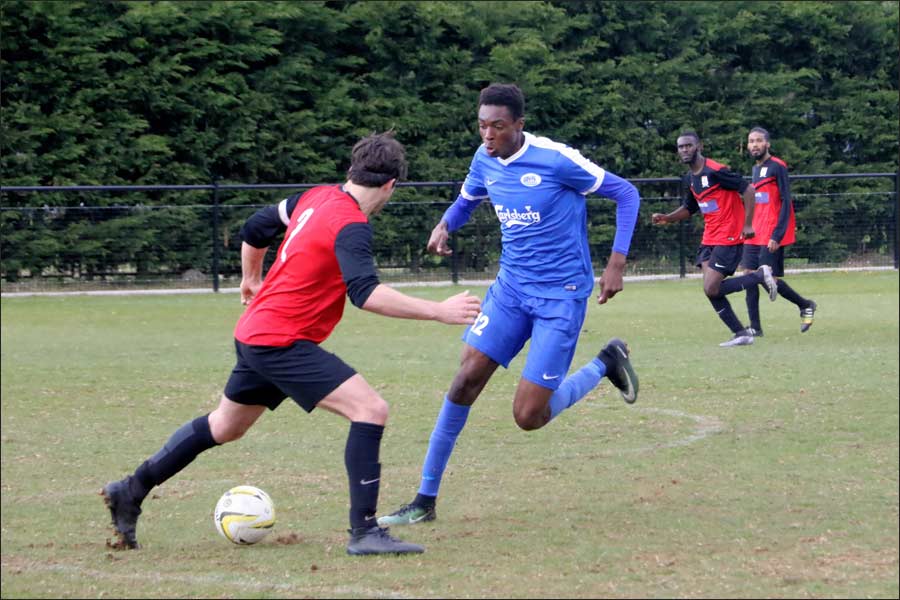 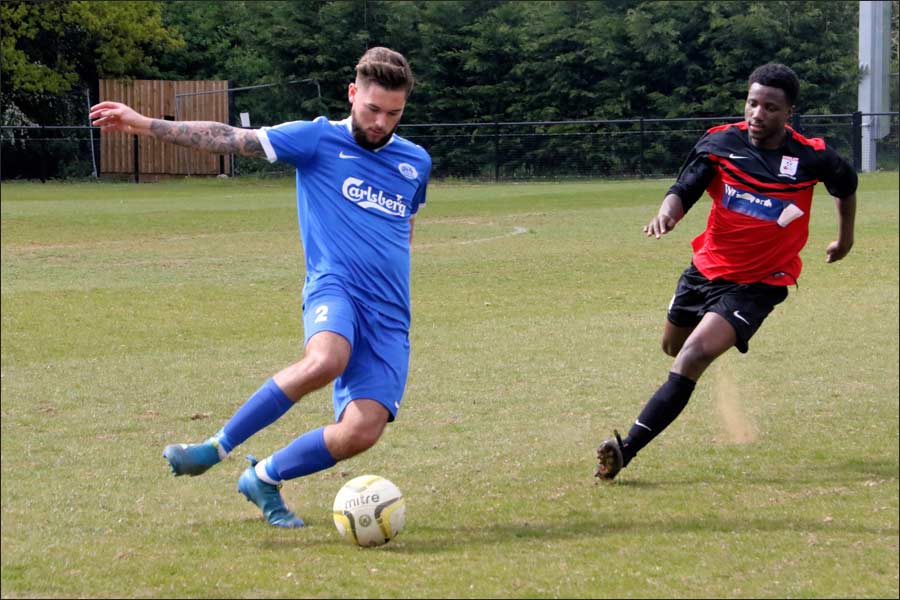 Many happy returns – Dan Taylor back in a Jets shirt 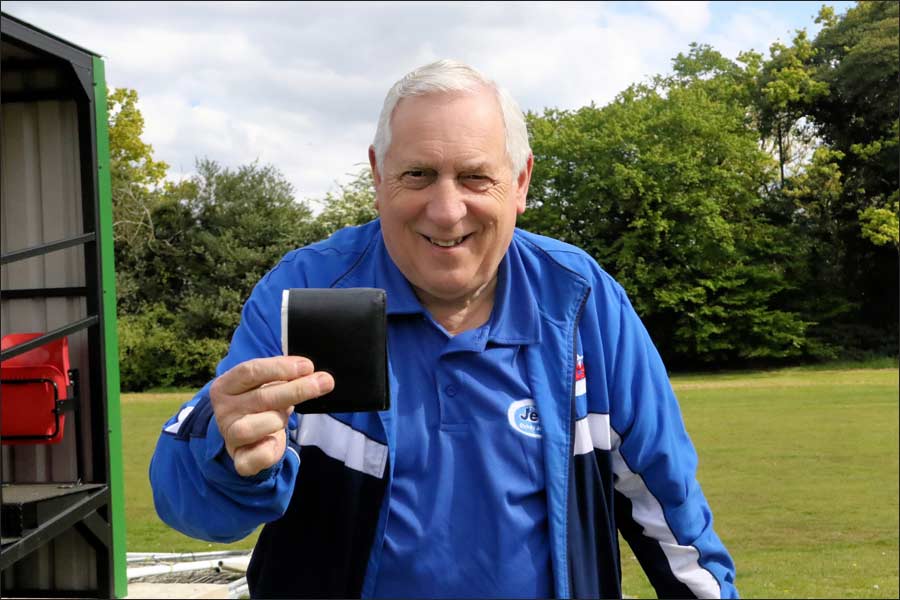 Season Ending High Spirits – the Treasurer bought a round! Well, teas for the staff!