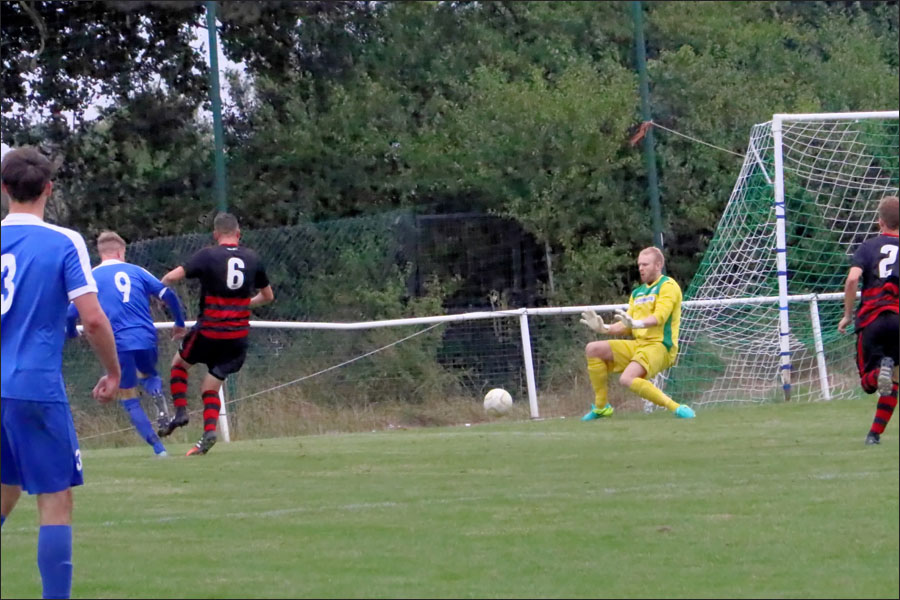 Jets turned a poor first half into a superb second as in the proverbial match of two halves scenario.

Manager Lee Stedman made changes and made it clear that he will rotate his squad, but today for forty five minutes the line-up struggled against a lively St Margaretsbury who completely made nonsense of their low league position. To say Jets were outplayed and were within a minute of luckily only turning around two down at the break would be an understatement.

Jets started slowly and got worse, arguably it could be said the worst 45 minutes of the season so far.

Jets lost Adam Lowton after just 18 minutes with a leg injury in this very tough battle and was replaced by last season’s top scorer Martin Netzer. 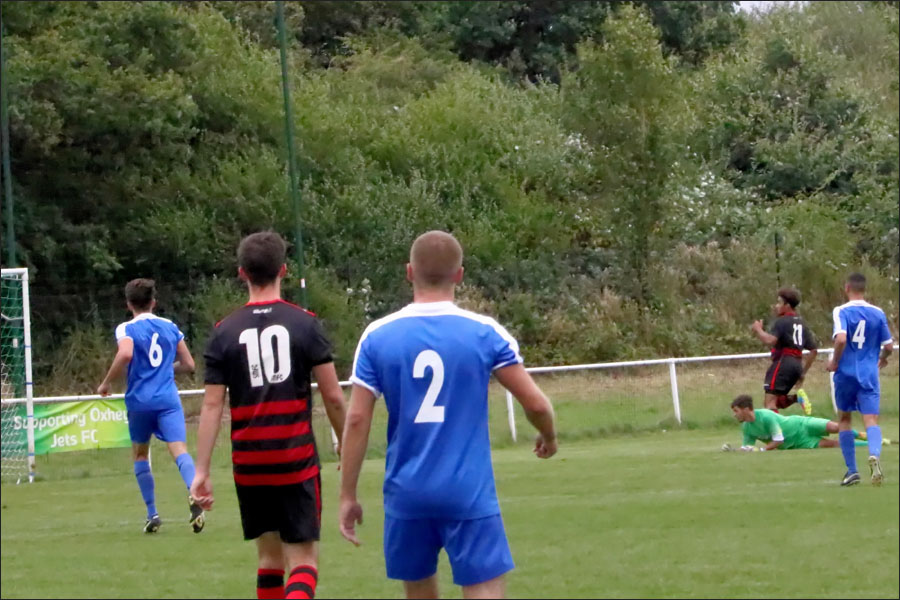 On 25 minutes with the pressure intense a bread and butter back pass went wrong and the dominant visitors were ready and waiting and Clay converted 0-1.

Jets fluttered a little but woeful passing let them down time and time again, then on 25 minutes there looked to be no way back when a goalkick found Anstead offside, and Jets argued the point perfectly not realising the basic laws of the game, you can’t be offside direct from a goal kick !! Which takes nothing away from the stunning goal by TV presenter who I’m sure will not miss the opportunity to mention it next time he is working, it was a super strike. 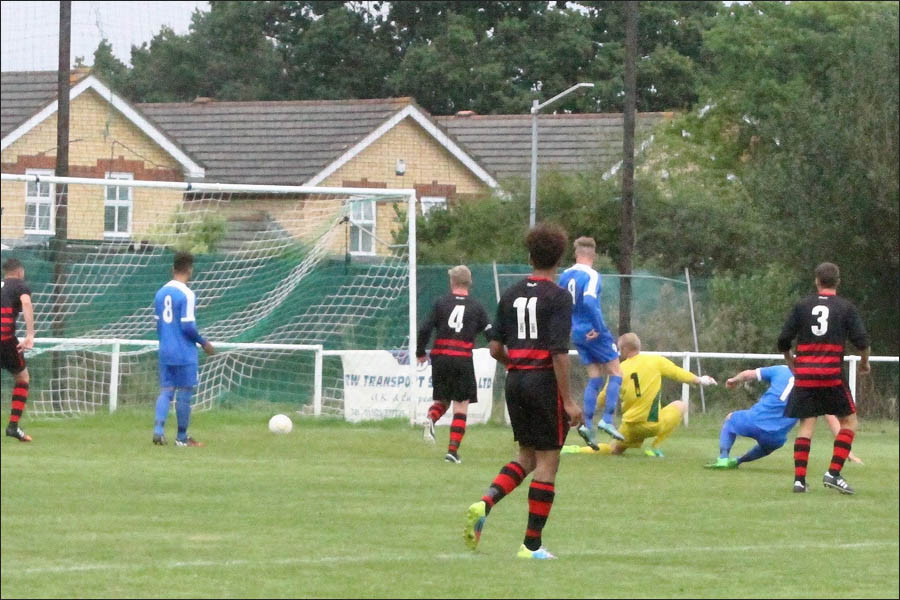 Jets were dead and buried and looked gone. Lee Armitt then had a good appeal turned down for hands as the isolated striker was working on scraps to haul Jets back in, but then on 44 minutes a scramble, a clearance then a return scramble finally ended with Ian Hurst striking home to incredibly give Jets a lifeline at the break.

Jets boss Stedman went ballistic in the changing rooms, censored down to ‘he was not happy’ but his final words were ‘they will be more gutted than us because they won’t know how we are back in it!’

Well if it’s a game of two halves it really was, what a stunning battle these two sides put on, an absolute ding dong it had the lot as no prisoners were taken in a very hard but fair battle.

Jets showed their intentions immediately when Armitt went clear and the ball missed the post by a whisker, and Jets were now the dominant side. 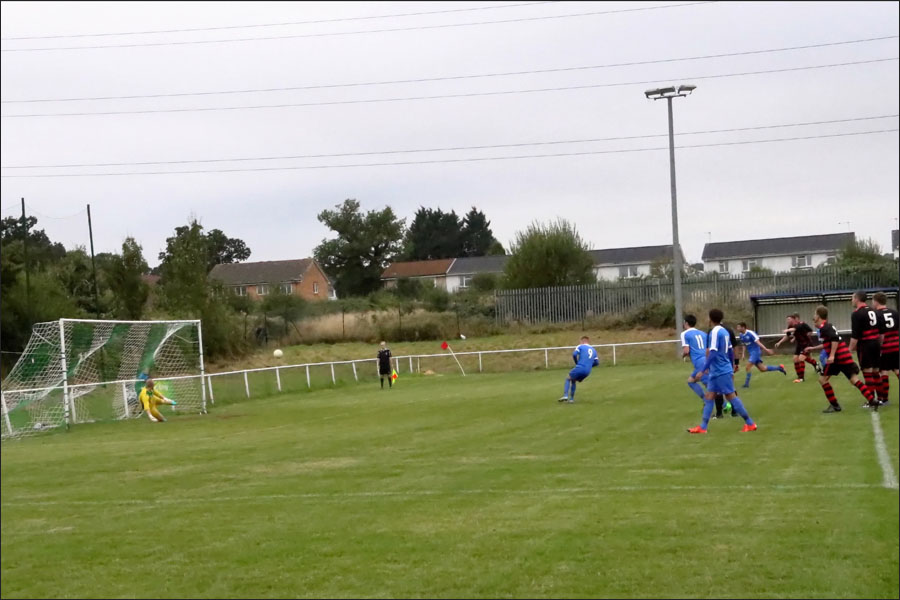 Lee Armitt levels it at 2-2 from the penalty spot

The breakthrough came when Brad Thompson, who made up for the first half error, charged forward and was felled in the box and Lee Armitt converted 2-2 (58 mins). 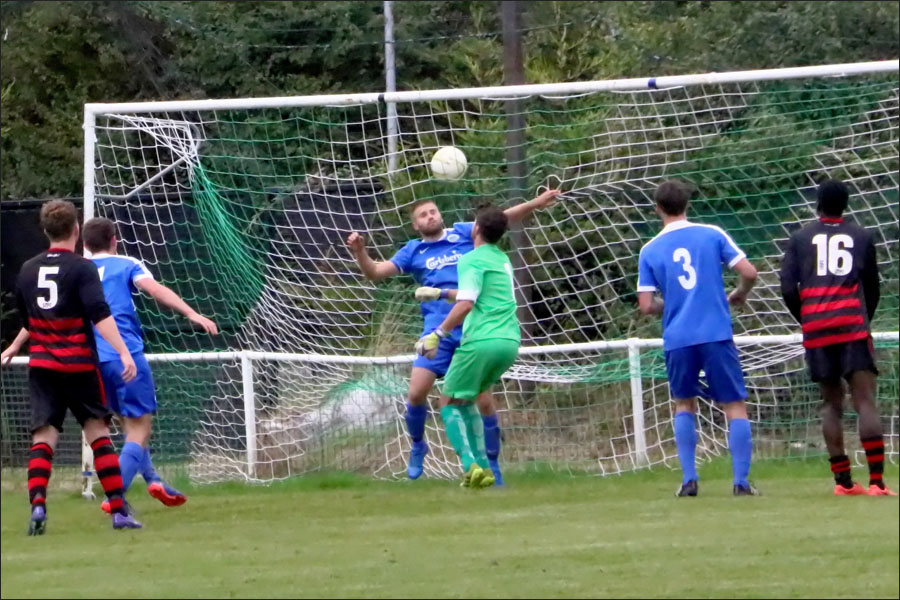 Scott Pugsley clears off the line

it was now end to end. Pugsley and Thompson both cleared off the line and despite a basketball moment that had Jets hearts in a flutter Partington was in control in the sticks.

The game could have gone any way and it was truly a battle and a half, then another turning point as first half goal hero Ian Hurst seemed to hesitate then go in and the clash led to his second yellow card and the red to leave Jets playing the last fifteen minutes with a man down. Bury smelt victory and went at Jets and the lads dug in deep and hard to hold, and Anstead was a real handful as St Margaretsbury battered at Jets. 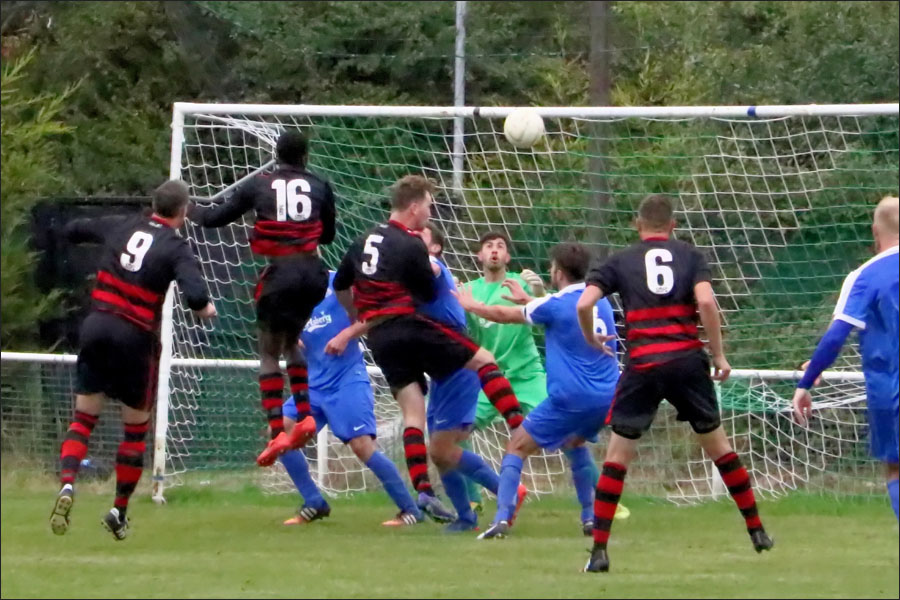 Ten minutes to go and Bury got the break that must end Jets resistance as the perfect delivery was superbly headed home by Fagbongbe (2-3 80 mins). 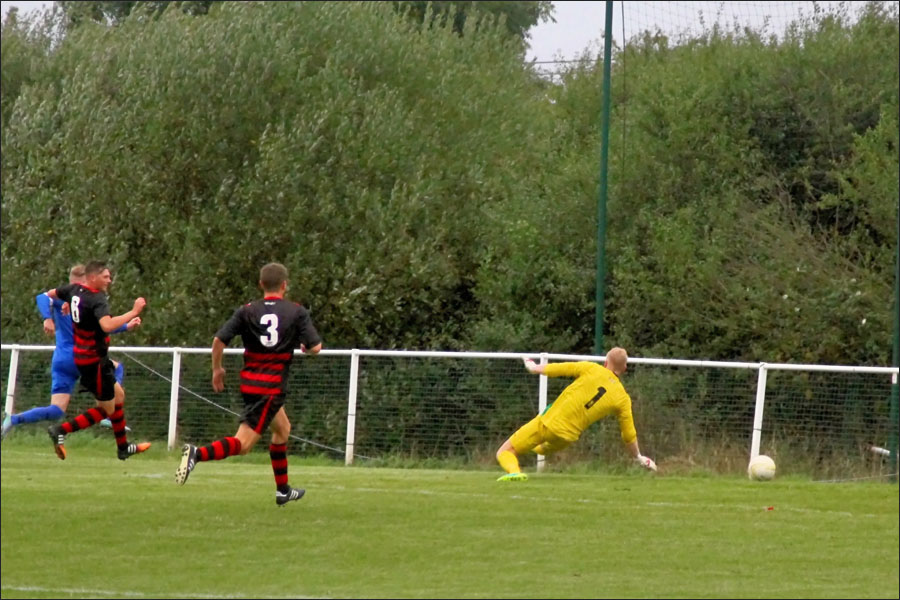 The visitors celebrated as we would, it looked over. Jets kicked off and two balls later Lee Armitt draws the keeper and from the tightest of tight angles the ball is in the net 3-3 (81 mins).

The last ten plus stoppage was end to end and both sides thinking they could win it, lose it… or just blow ref and settle for the point, and finally he did and I’m sure a neutral would say deserved result but what a cracker for the fans to watch, especially the second half when both sides played well.

Jets man of the match went to Lee Armitt who worked solo on scraps for 45 minutes before his teammates finally supported him in the second 45 to contribute to his two goals. 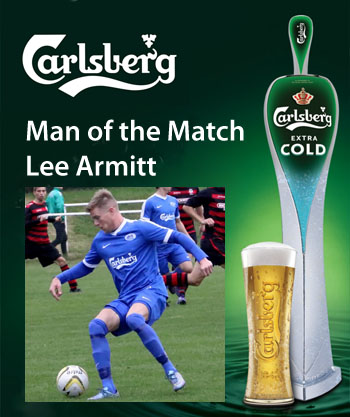 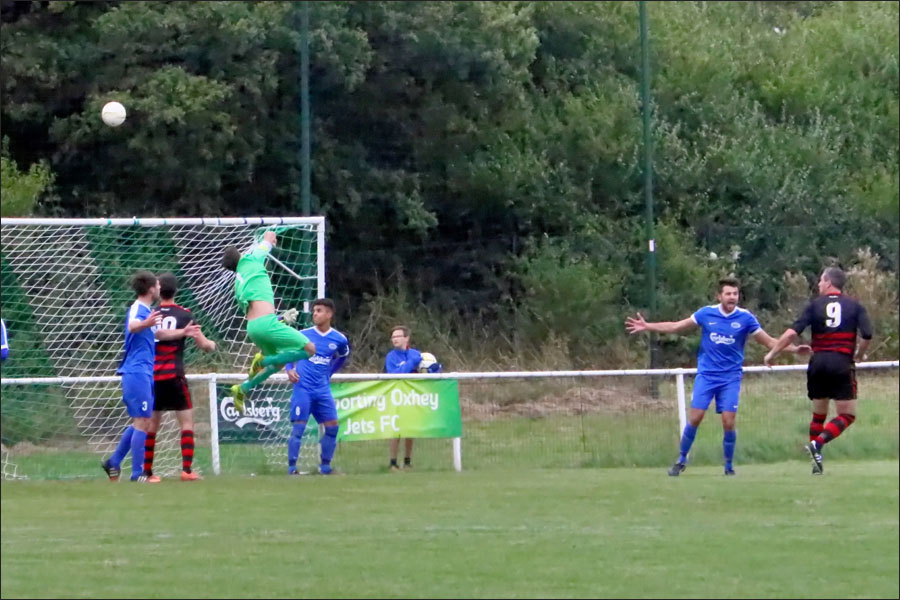 Super save from Rob Partington at 0-0 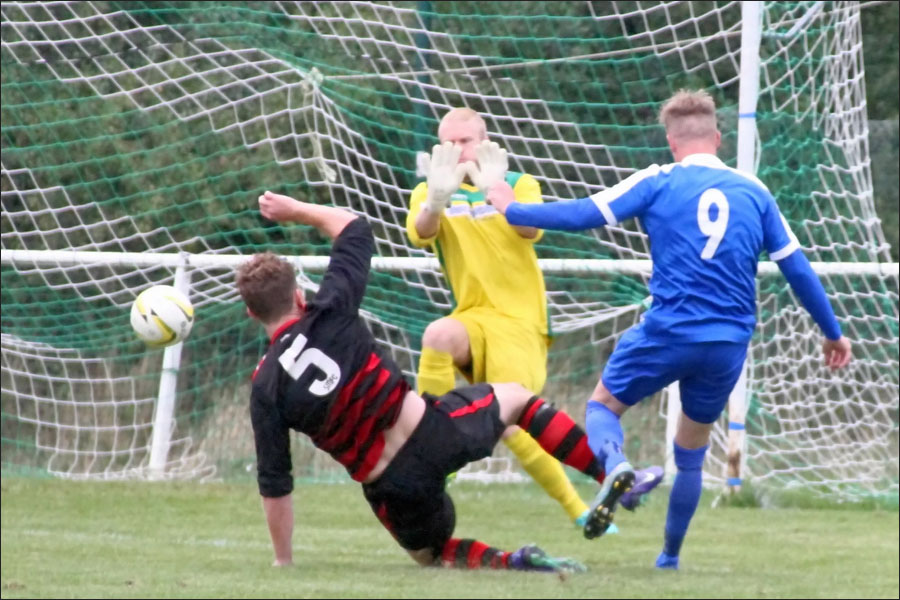 Lee Armitt denied with the score 1-2 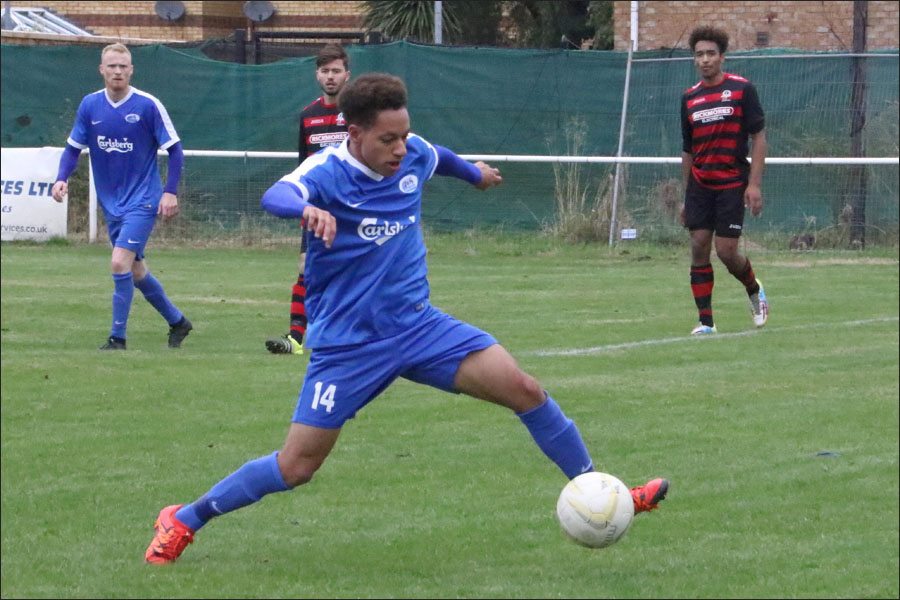 Martin Netzer had a strong second half 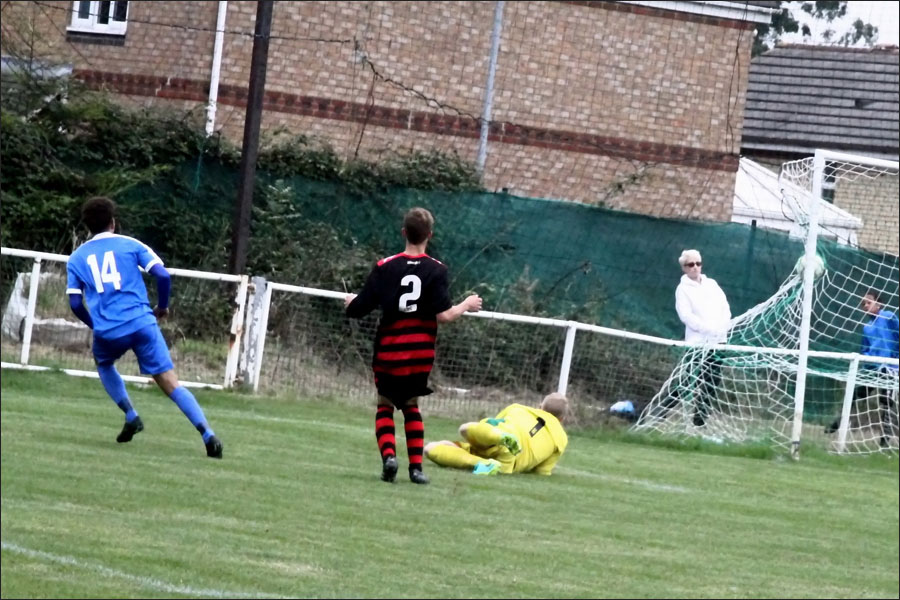 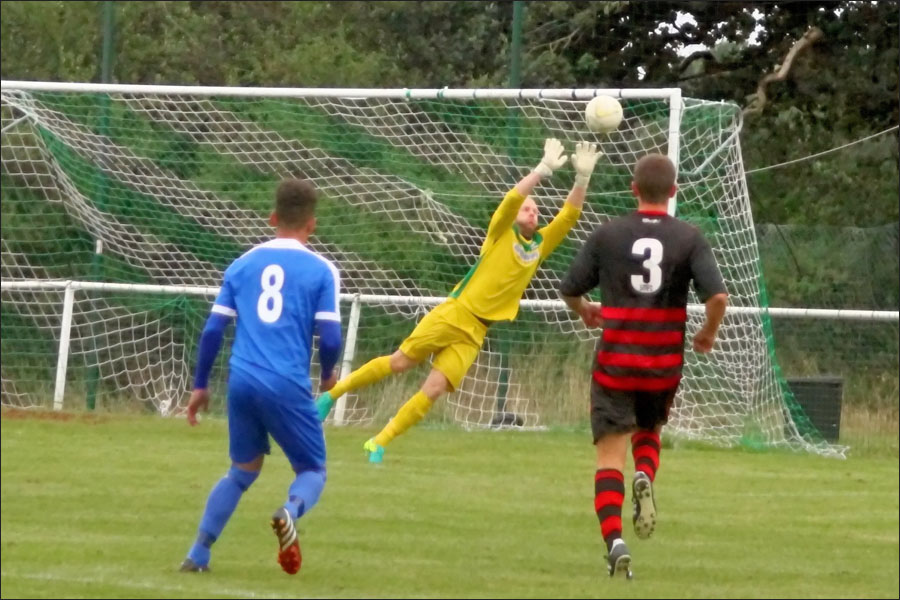 Josh Noyes was so close 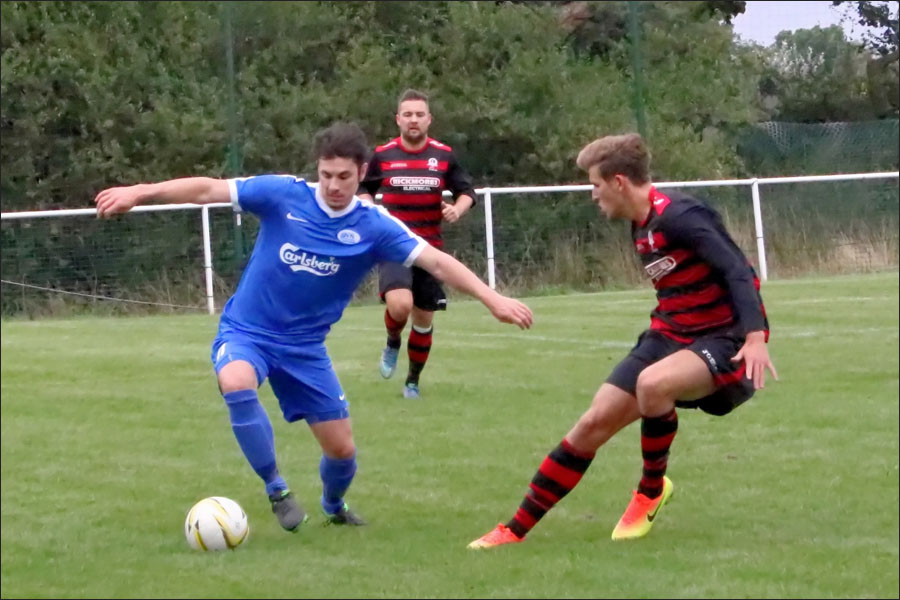 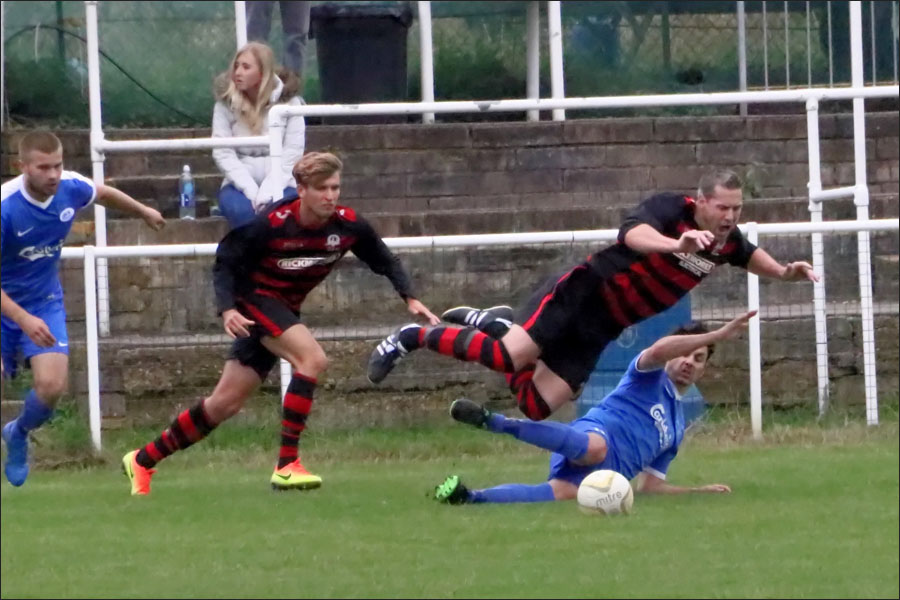 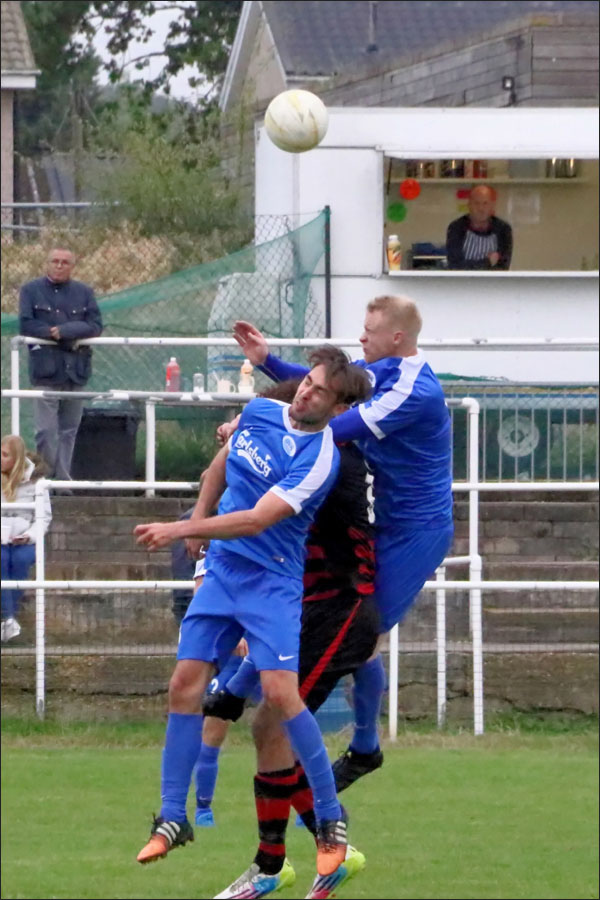 A hearty but fair battle between two committed teams 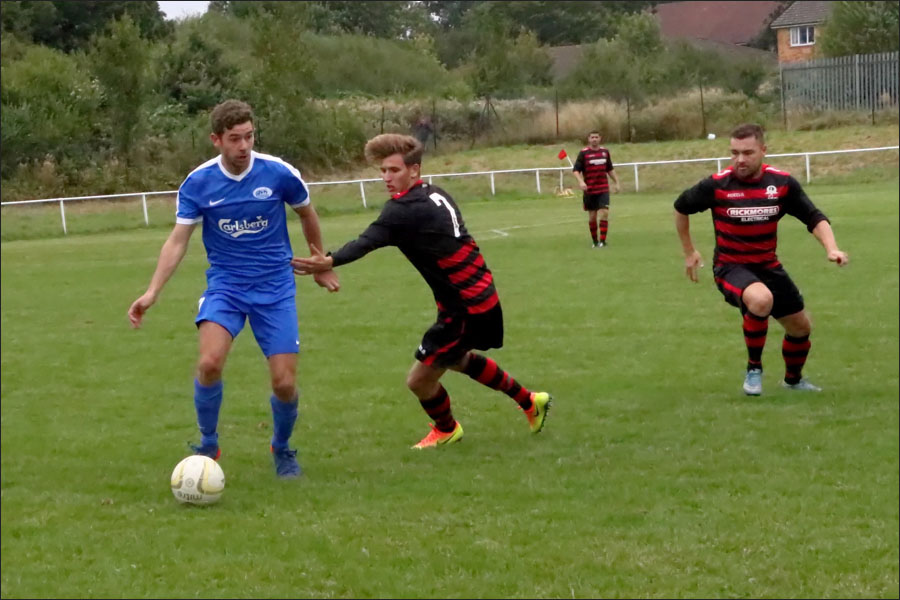 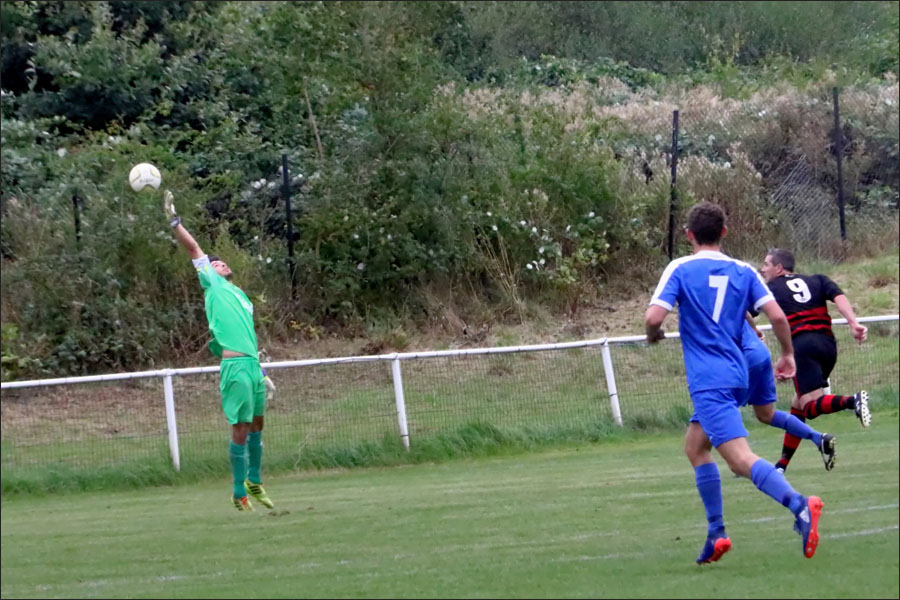 Rob Partington tips over the bar 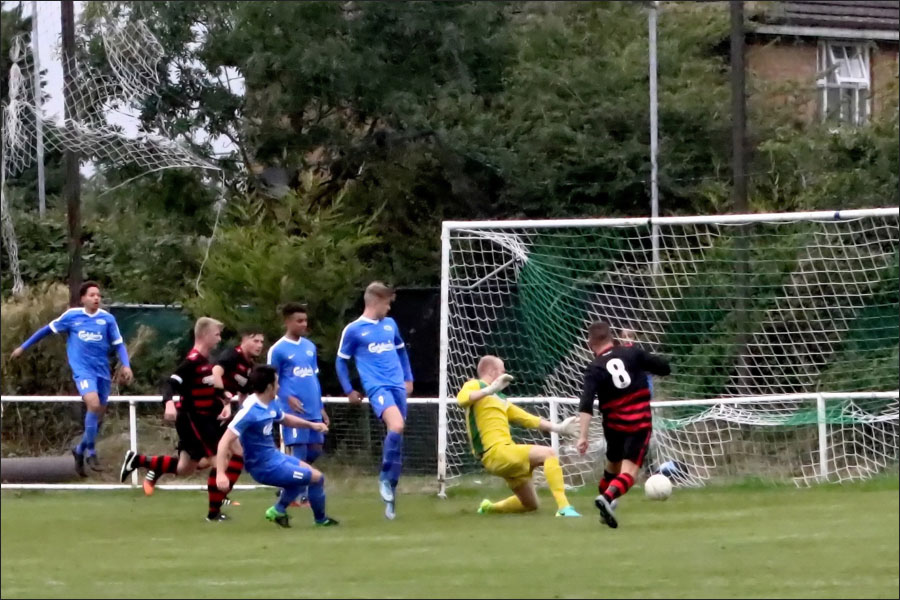 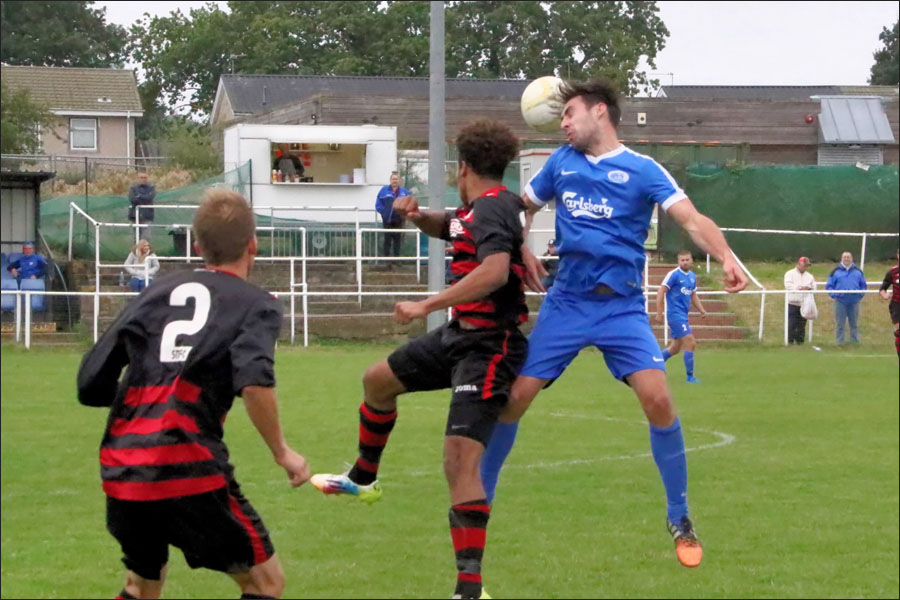 Brad wins in the air 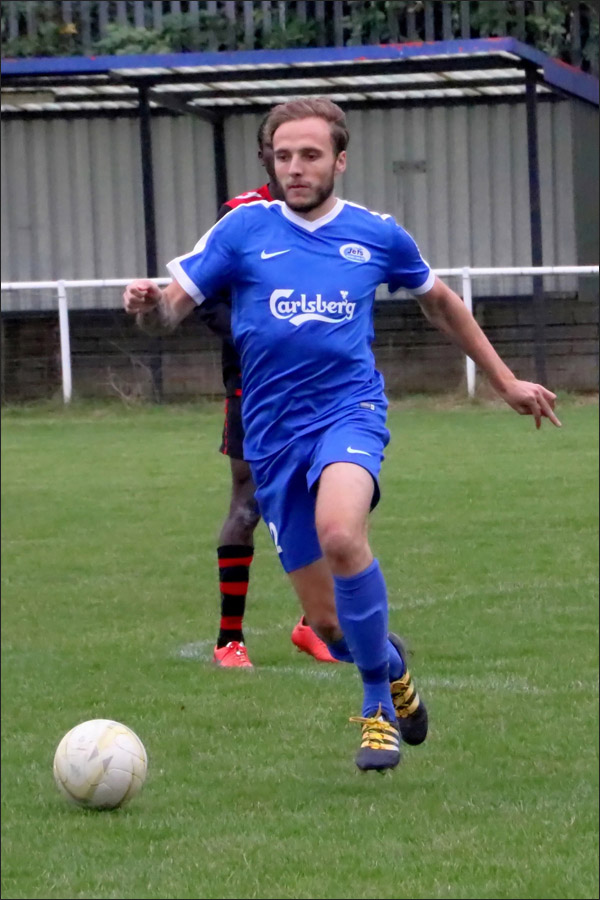 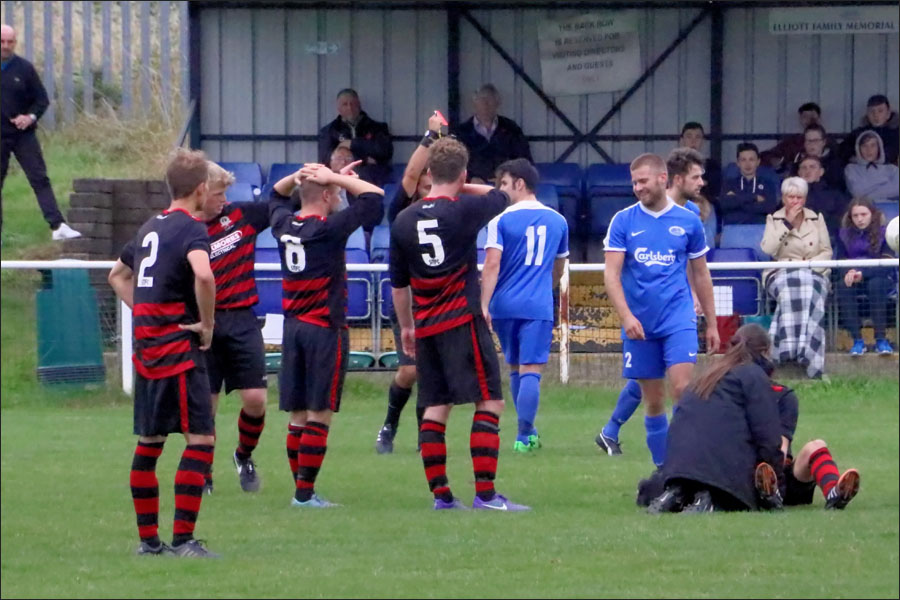 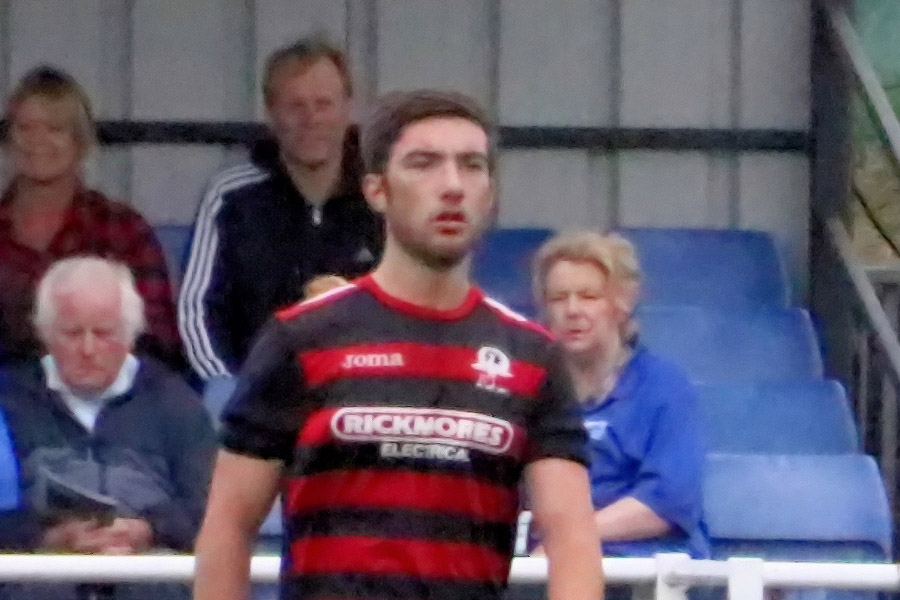 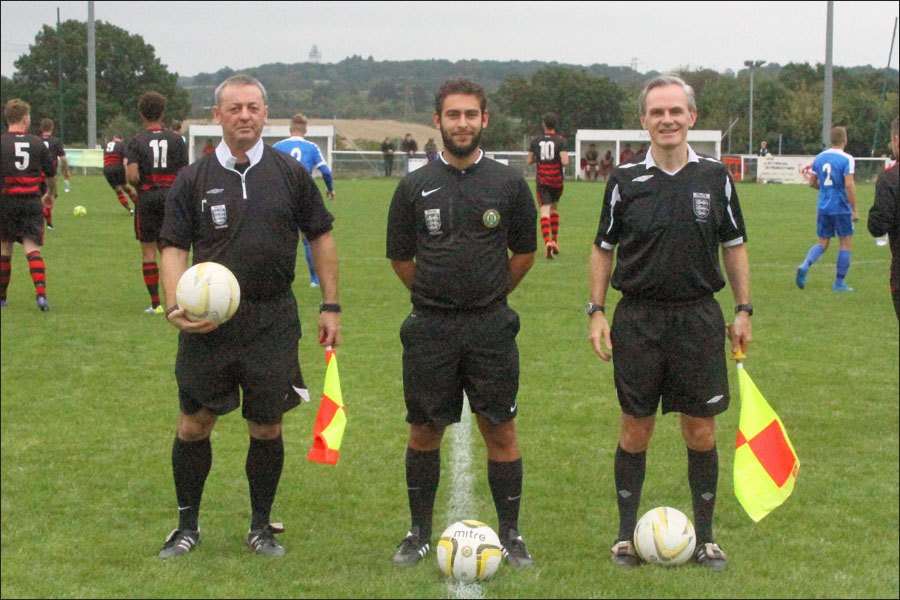