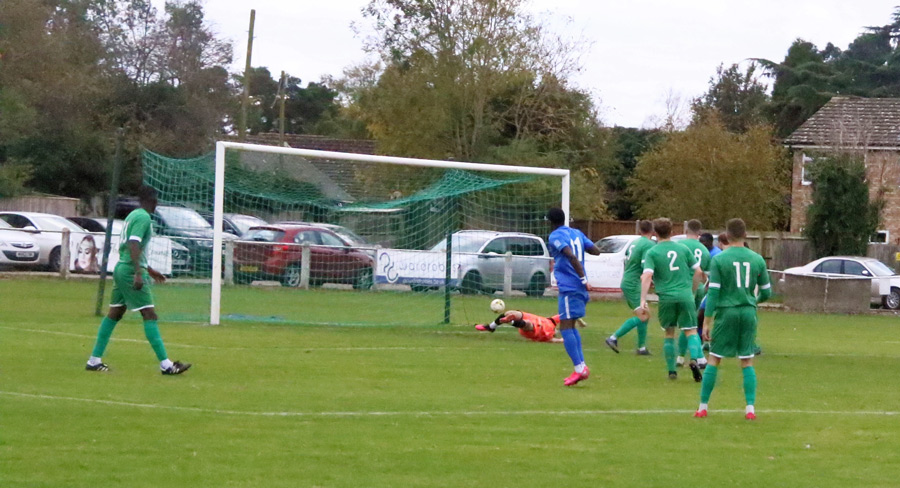 The game was only a couple of minutes old when the Leverstock goalkeeper, as last man when Sean Giordamina broke through, committed a badly mistimed tackle that stopped the game for several minutes and led to Sean being taken to hospital by John Elliott. As a result we have no match report of our own, so we have used the Leverstock Green report here.

Fair play to Leverstock Green on their report as they recognised that their goalkeeper should have seen red, and that Jets put in a fine performance to deny them and end their unbeaten run.

Leverstock Green’s winning run came to an end against against an improving Oxhey Jets side on Saturday. Oxhey keeper Lewis Todd was the hero for his side, pulling off several impressive saves, including a second half penalty.

The game’s main talking point came very early on. In the third minute of the game Leverstock keeper Alfie Bonfield came racing out of his penalty area to meet oncoming Jets striker Sean Geordmaina. Bonfield slid into Geordmaina with a challenge that was high and reckless after the ball had already gone. Everyone in the ground expected a red card to be shown, including the Leverstock management team, who were considering their options, but after consulting with his linesman, the referee only produced a yellow card for Bonfield. Meanwhile Geordmaina required lengthy treatment and was taken to hospital with facial injuries.

The Green side were very lucky to still have eleven men, and they should have gone in front in the 11th minute when a pass from Paplamin Jawara put Lewis Collins in behind the defence, but Collins put his shot across goal and wide. However three minutes later a similar lofted pass from Dan Weeks allowed Rawn Seale to beat the last defender, and Seale successfully slotted the ball past Todd to put Leverstock into the lead. 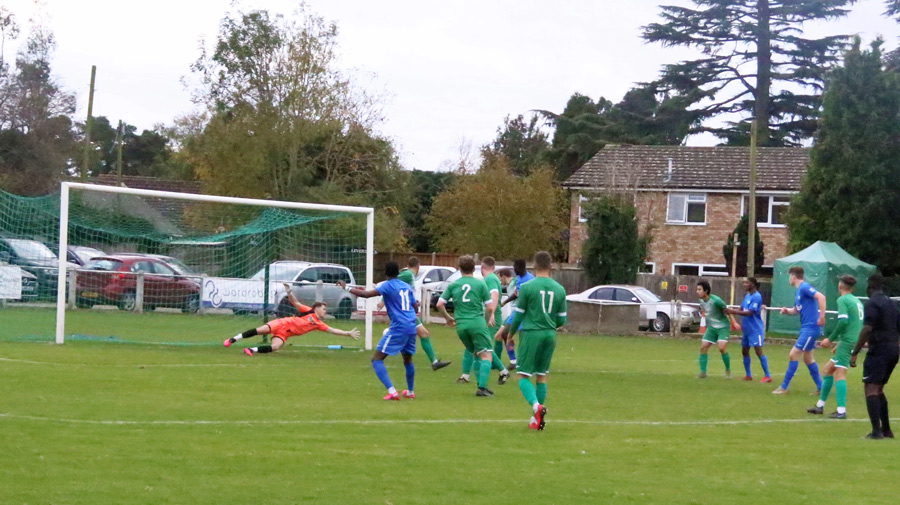 Kyal Williams levels it for Jets 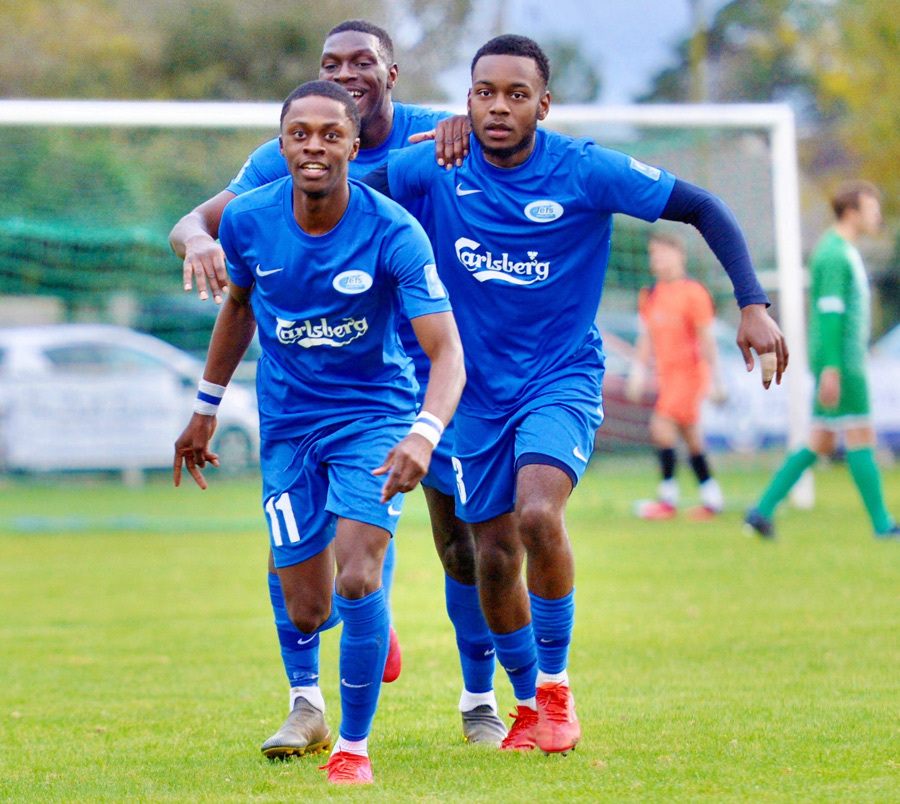 Leverstock continued to push forward, although they could not create any more chances, and on 21 minutes Oxhey levelled the scores when Kyal Williams had the space inside the box to turn and fire a shot past Bonfield into the corner of the net.

Two minutes before half time the turnaround was complete when Williams lofted a ball from over 40 yards that was probably intended as a cross, but Bonfield was helpless as the ball dipped over his outstretched arm into the top corner of the net.

Great penalty save by Lewis Todd

Leverstock made a brighter start to the second half, and had a golden opportunity to pull back level in the 51st minute when Rio Beach was brought down inside the box. The referee awarded the penalty, but Jawara’s spot kick brought out a great save from Todd.

Todd continued to frustrate the Green side, pulling off another save to keep out a long-range effort from Jawara on 63 minutes. The rest of the Jets defence were also doing their jobs well, throwing themselves at the ball to block shots and crosses, while Leverstock had a number of other efforts which missed the target.

On 76 minutes Oxhey were reduced to ten men temporarily when Daryl Bryan-Samuels was sin-binned for dissent aimed at the linesman, but Leverstock could not make the extra man tell during the ten-minute period. In the 83rd minute Todd saved again to keep out a header from Dan Pett, and on 87 minutes Jawara shot over the bar from a good chance.

As Leverstock continued to push forward for the equaliser they left themselves vulnerable to the counter-attack, and in the 90th minute Oxhey should have sealed the game when Ricardo Adewuyi was clean through. Bonfield saved his shot, but the rebound fell to Theo Costa, who had an open goal but shot over the bar. Oxhey could have been made to pay for that in stoppage time when Pett was through on goal, but Todd pulled off another incredible save to keep out his shot, and Oxhey held on for the win. 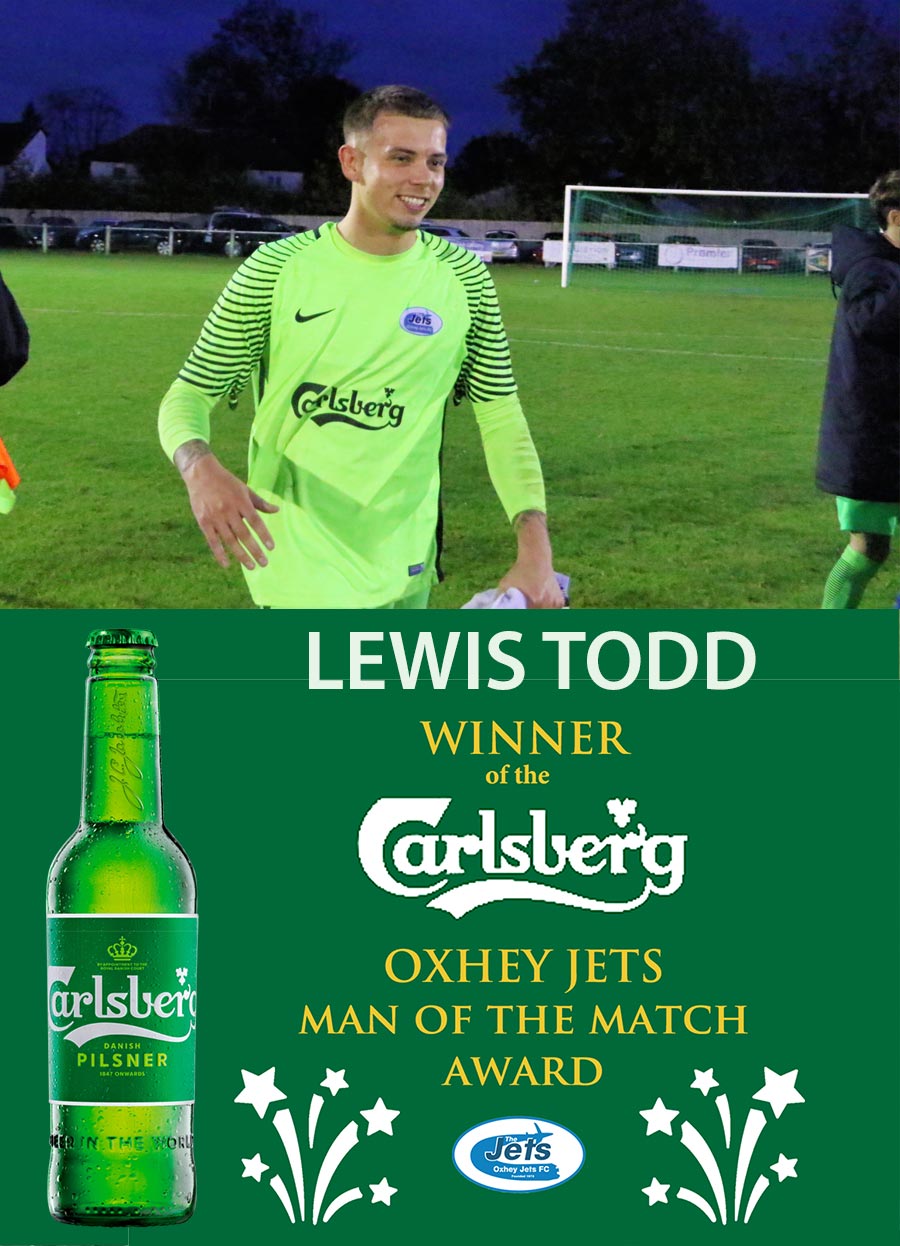 So many good performances today from Jets, and a tremendous desire to win and, with that comeback performance, a real determination to win for Sean. Kyal Williams scored two goals, the team played superbly together but there could only be one winner today and that was Lewis Todd who put on a brilliant display in goal.