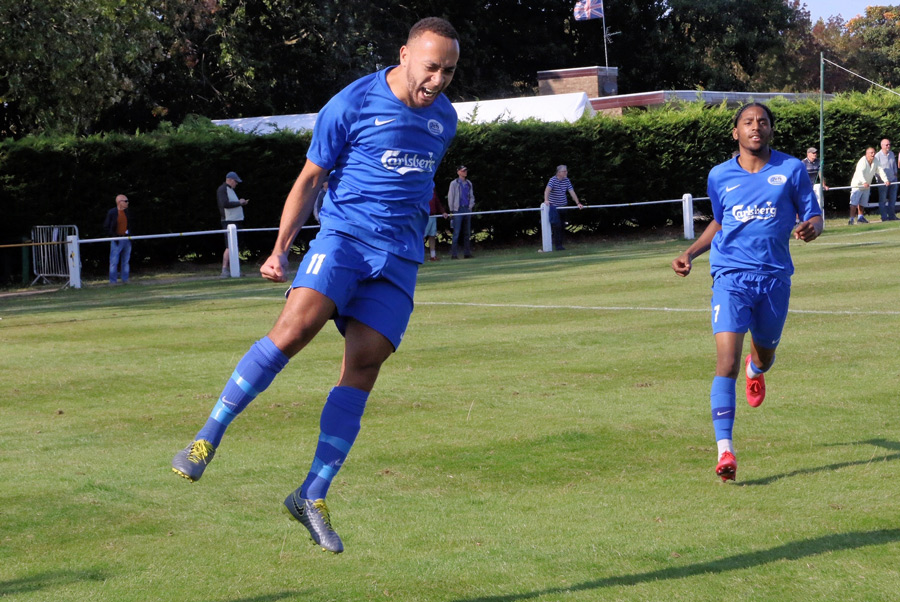 Jets have played four stunning matches so far in the new season, not just by Jets but also by our opponents. These have genuinely been four absolute crackers to watch.

Ok, today, three changes from the previous starters as Daryl Brown, Ashley Lewis and Nick Kerley we’re not available. Still, the reshuffle did not disappoint, and today everyone played their part again.

Jets started brightly despite challenging to say the least preparations with COVID restrictions at the ground, making things difficult with no showers and all but impossible changing accommodation. I’m glad it was a hot sunny day, not a wet winter one., I’m struggling to see how long journeys can work COVID style in hard winter at this level, but at least we’re playing I guess many areas are not again. 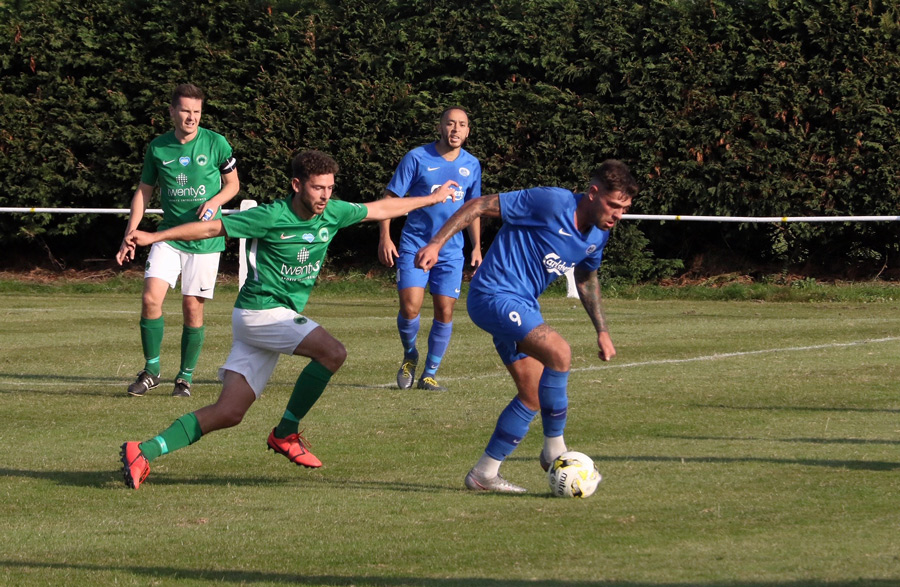 It was a nose to nose, blow for blow encounter against one of the seasons fancied sides which is now home for former Jets midfield man Leigh Stevens.

Lewis Putman was looking his old self today, very menacing coming at the defence, but having a great match was also Chris Blunden enjoying a different role and excelling in it.

Chris Blunden – delighted with his goal.

Chris Blunden gave Jets the lead from a stunning free-kick, 25 plus yards out and a banger up and over the ball and into the net leaving the keeper looking in disbelief (0-1 17 mins) 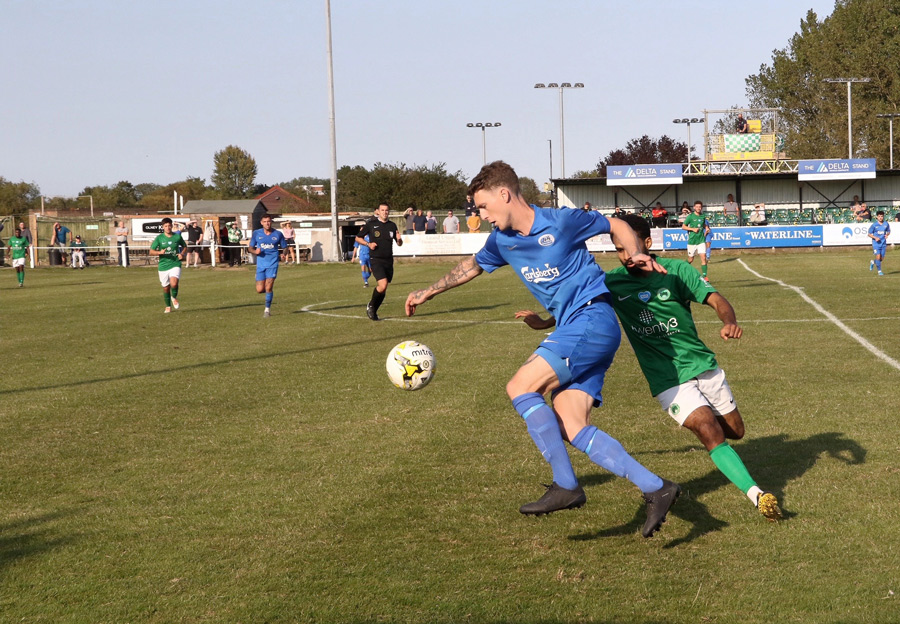 Jets had a good spell, and Putman was jinking and tempting the defenders to nibble.

Big chance for Jets to increase the lead.

Carlos has the Pagnell keeper scuttling.

Carlos had a great effort, a cheeky flick then lob, that had the keeper scuttling backwards hoping and got lucky as it just missed the post. Then a defining moment as he was played in for a sitter but blazed high and wide, and for the third game in a row punishment was swift and full. 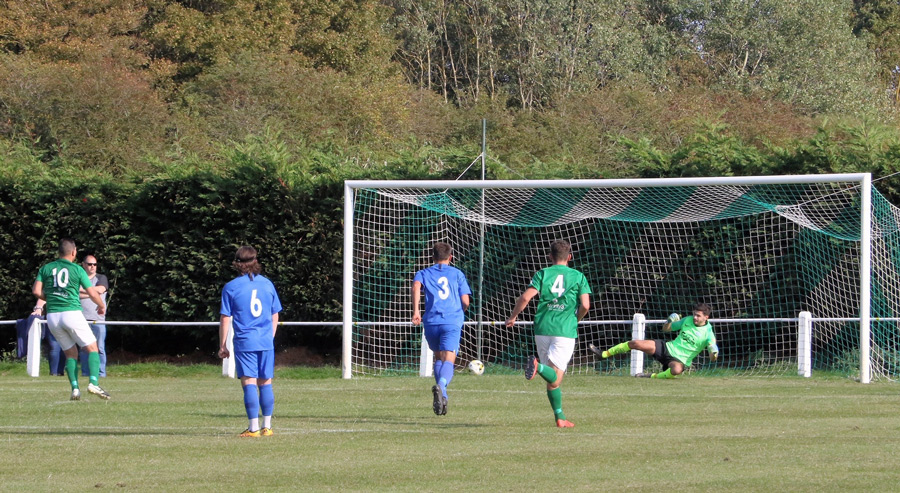 Newport Pagnell level from the spot.

Town broke fast and Jets we’re on the receiving end of the controversial handball interpretation as Harry Beaumont was judged ball to arm, but there’s contact so penalty, converted 1-1 (41 mins).

The inconsistency is the most significant bug as literally within a couple of minutes an all but repeat at the other end was not punished and left a bitter no penalty taste in Jets mouth.

The attempted discussions were a waste of time as it was clear the reams of COVID paperwork were far more critical talking about numbers standing and substitutes social distancing rather than the inconsistency in decisions. 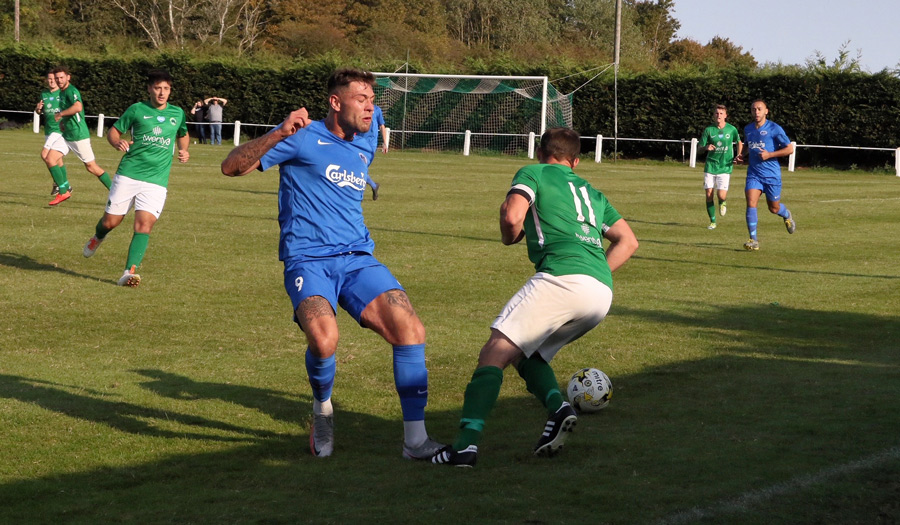 Reece had a bruising day in midfield.

The second half was hard graft and a battle, and no one was more bruised than Reece Cameron today who seemed to take the lot including a big elbow blow but fair play he justified the manager’s decision to change and give him the start spot.

Also for Jets, there were 10 minutes with ten men as Jamie Speer got sin-binned for dissent, it could be so costly these days that we must stop, dissent leading to ten men is not an option. 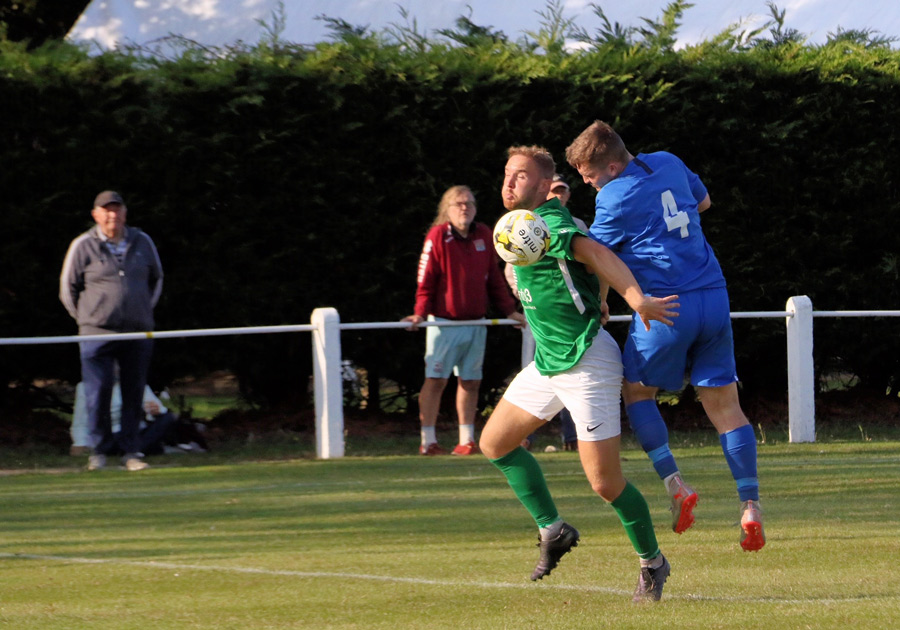 Now it was the hard men who took the baton for Jets with Gibson, May and the excellent Preedy battling everything As did Speer on his return to action as the strong wind towards Jets goal edged the advantage to the hosts. 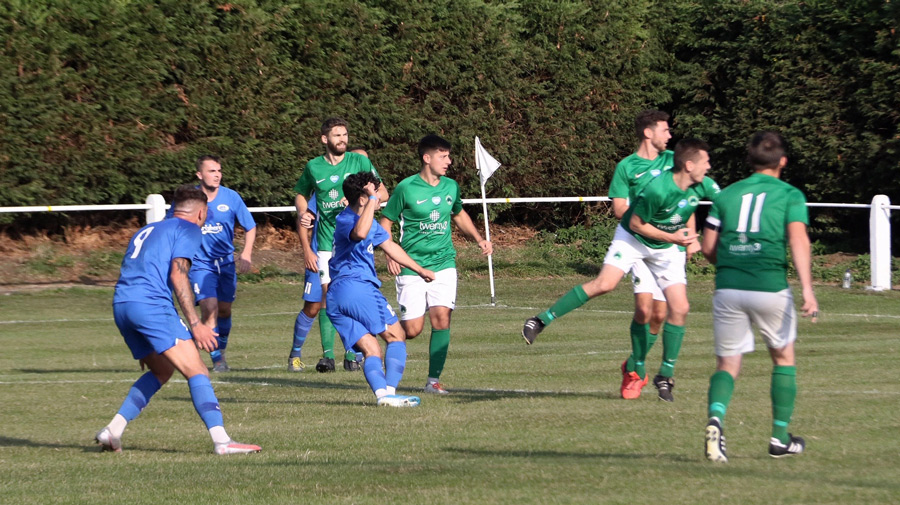 Carlos Simeo was looking tired after the restart and broke down with cramp, and Sean Giordmaina came on. A swivel shot almost paid instant returns as Jets started to reverse the trend again, but this was now a real nose to nose encounter and Rob Partington, key in goal, was alert and controlling his area. 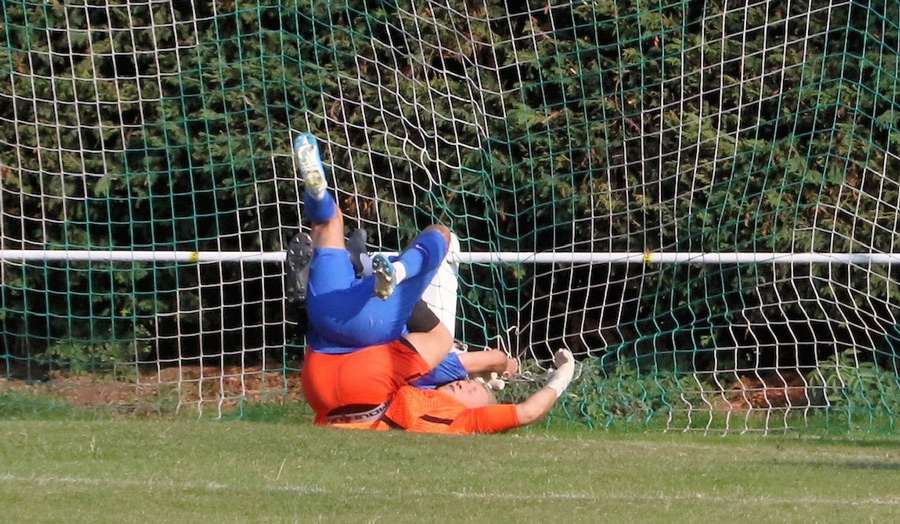 Sean Giordmaina wrestled to the floor by the Pagnell keeper.

Again, the big decisions did not go Jets way. Twice Giordmaina was wrestled to the floor by the keeper while set pieces were being taken but not detected. 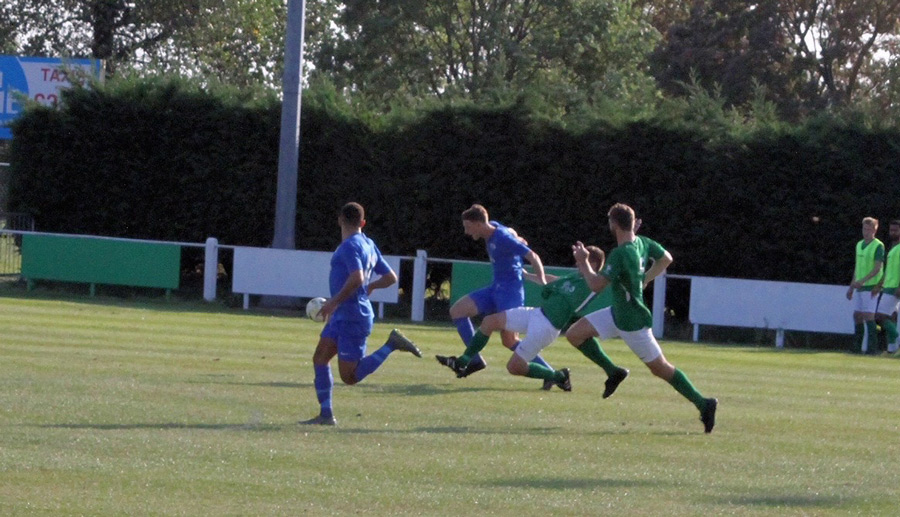 Putman pulled back but only the ‘pass back’ to the keeper was penalised. 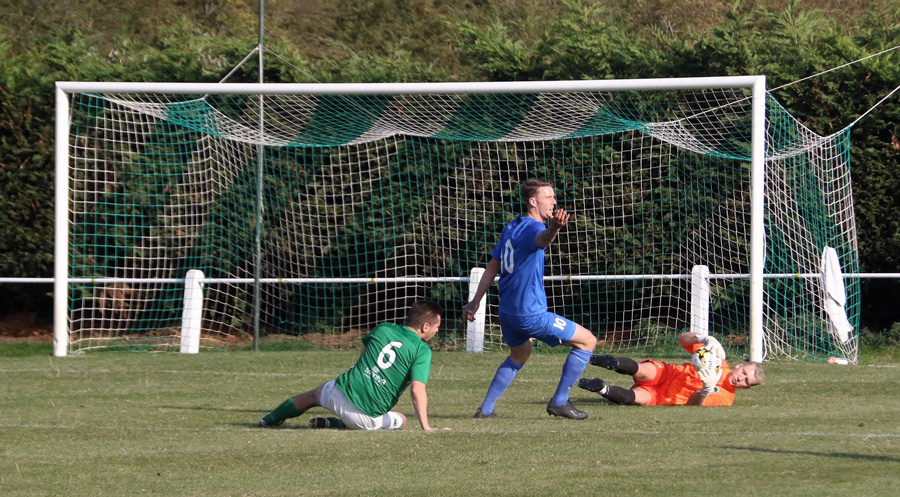 Then the horror of the day as Lewis Putman worked hard to break and was pulled back in an edge of box position, Pen and Red surely the only possible decision. No! Since the defender also played the ball to his keeper, it was an indirect free-kick that was defended away to safety. 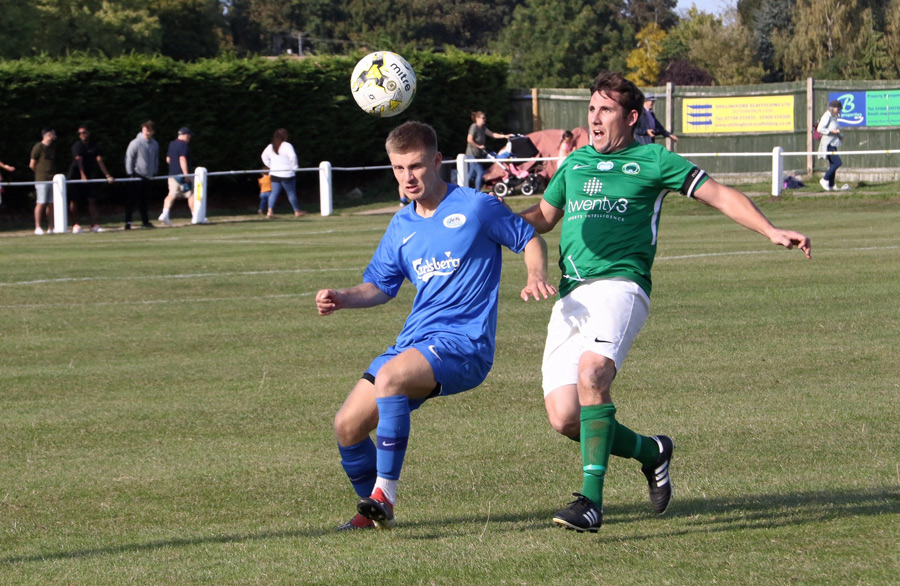 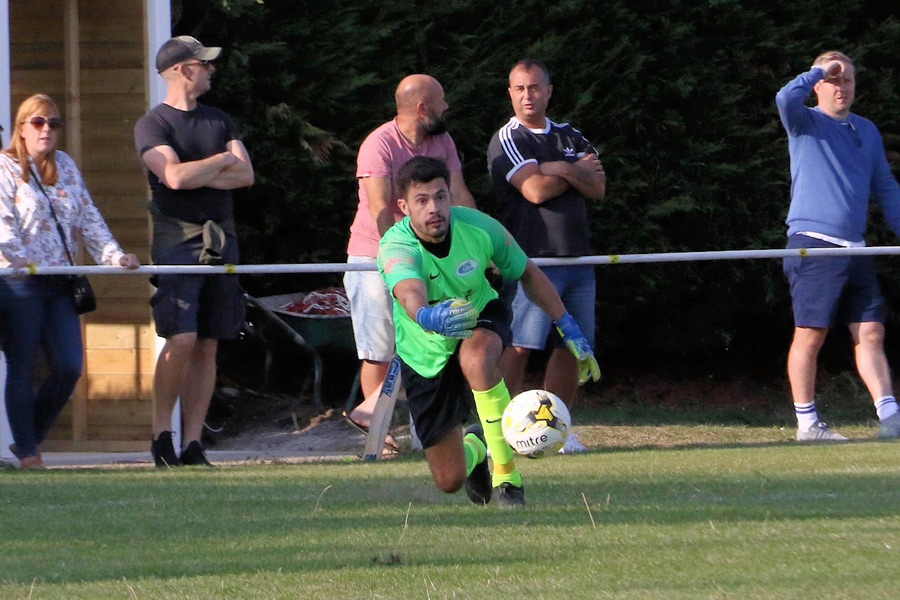 At the final whistle, both teams deserved a very hard-earned point. It was a good battle. Only Jets will feel a couple of decisions did not go their way. 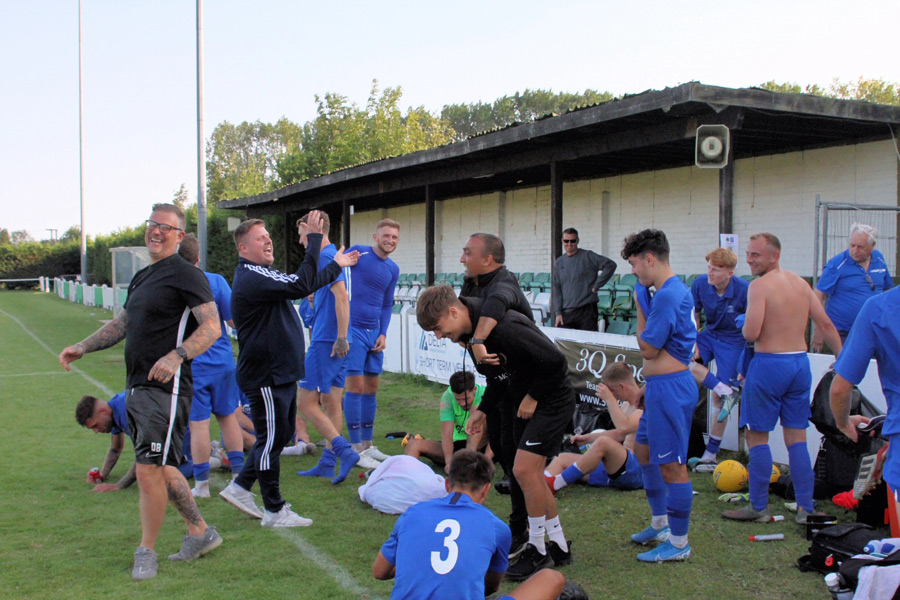 Any attempt at a team talk in the new changing room aka the dugout was again ruined by the PA playing loud music over the nearby speaker that even managed to drown out Preedy’s insane noise. In the absence of a pair of wire cutters and a gag, there was nothing to do but to have a sing-along by “Stuart and the Jets”, pleased with a strong point away from home. 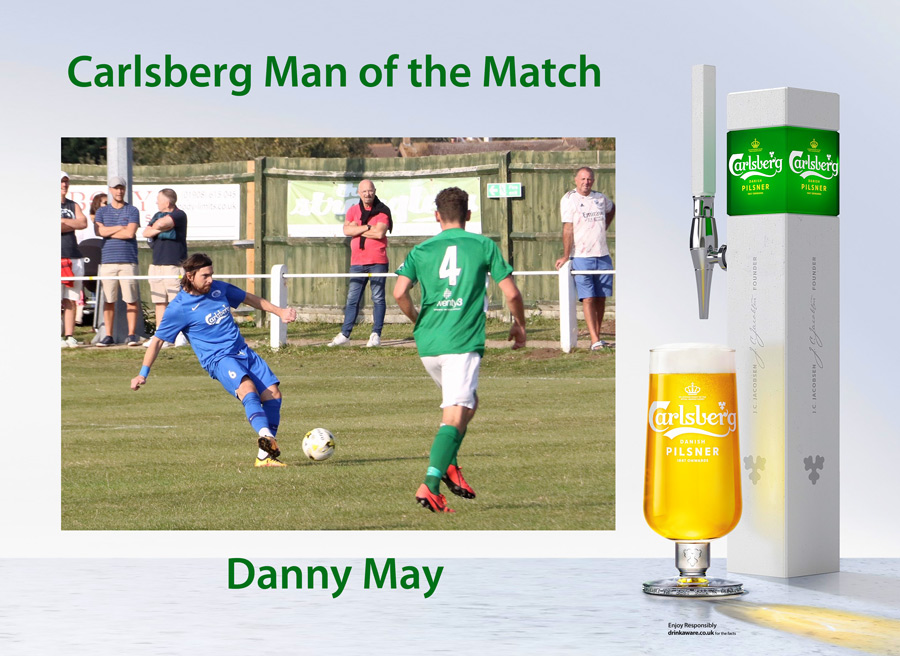 The Jets Carlsberg Man of the match today was Danny May in his defender role, edging out an excellent performance from Chris Blunden.

A highlight was to follow as Jets were joined on Battle of Britain weekend by manager Stuart Atkins’ Grandad Glenn Atkins. Sgt Air Gunner Glenn Atkins was a brave Lancaster Bomber rear gunner. Wow, the man has stories of bravery to impress anyone, and he was thrilled to know Jets at home come out to “Dambusters”, his former home base and squadron. The lads gave him a great ovation. What a brave and fantastic man and it was our honour on Battle of Britain week to have him with us.🇬🇧 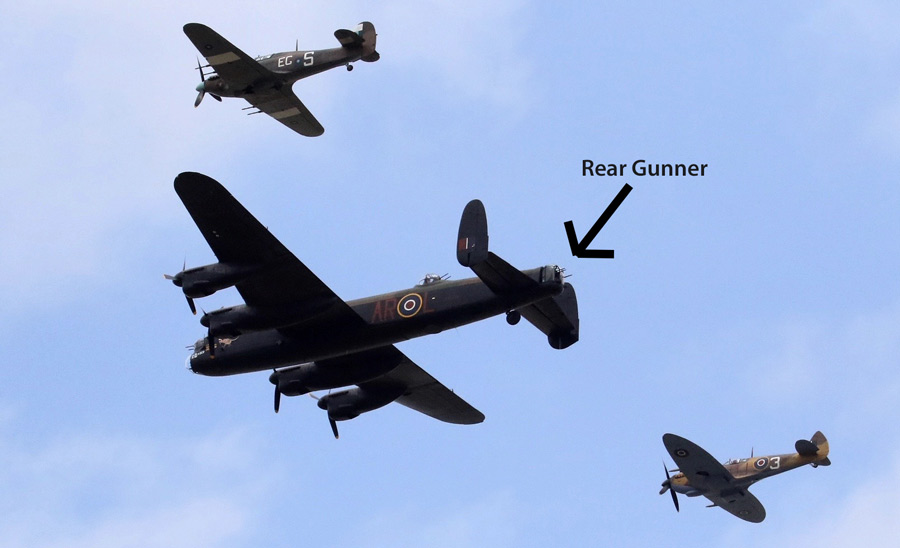 Rear Gunner on a Lancaster was one of the most dangerous roles in the RAF. 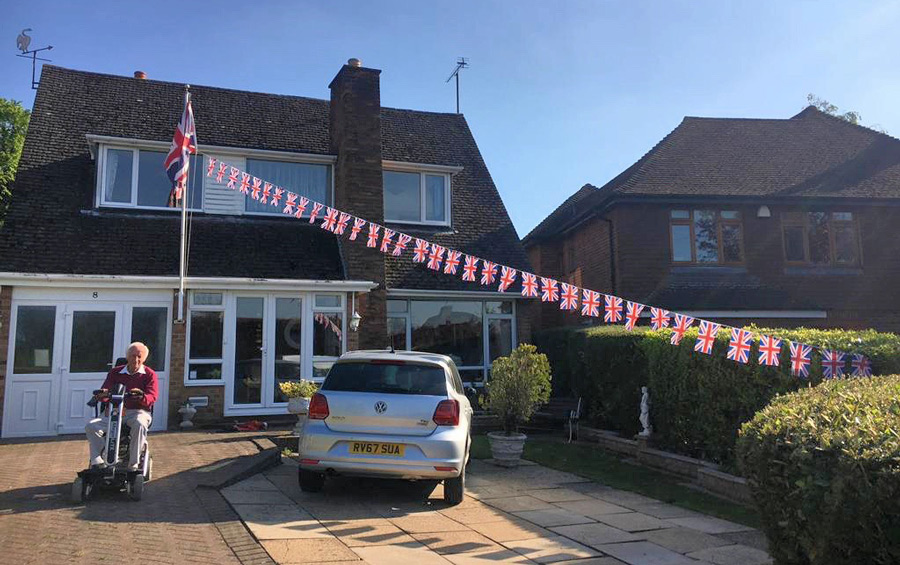