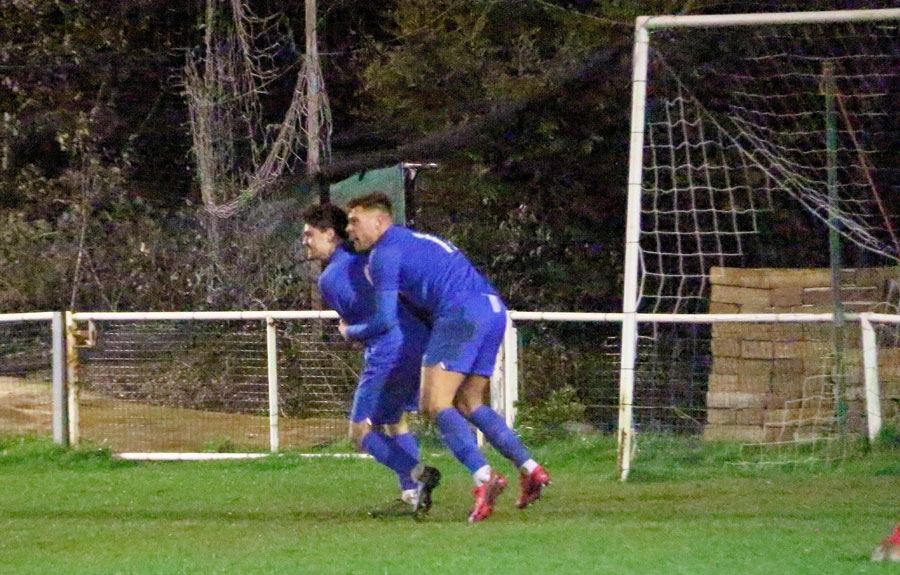 Jets maintained there lust for points making it 13 from 15 in this present good run that’s seen four clean sheets out of those five matches.

Tonight’s game was on a very, very wet and challenging pitch, and when the rain started, it cut up worse.

Jets boss Tim O’Sullivan rotated his squad who were playing their third match in six days on very heavy pitches. Rested were Louis Bircham, Scott Bonner, Reece Cameron and Ash Lewis along with Leigh Stevens out injured, so an incredible bench for this level waiting to come on if things don’t go well.

Another strong game from captain Gibbo.

London Colney are bottom and desperate for any points, even more so after the half-year AGM the night when they were told they are not in the best two on points per game at the moment, amongst the fourteen leagues at this level, who will escape this season’s deadly FA shakeup. 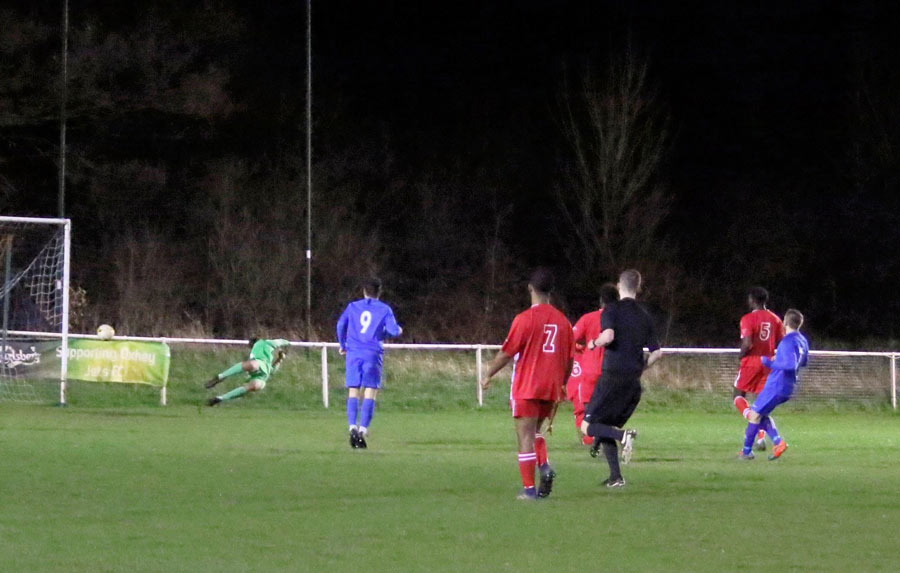 So close for Nick Kerley

Jets had chances and were quite wasteful at times, but you had the feeling the breakthrough was never far away. Nick Kerley came close, and Sean Giordmaina was denied by the keeper as Jets pushed, but the conditions were draining and a leveller to the players.

Andre Lopes was clearly in trouble with his ankle after a half-chance near the keeper where he rolled his ankle and later had to be withdrawn with what now looks a ligament injury.

Andy Brennan waiting at the back post as the cross comes over. 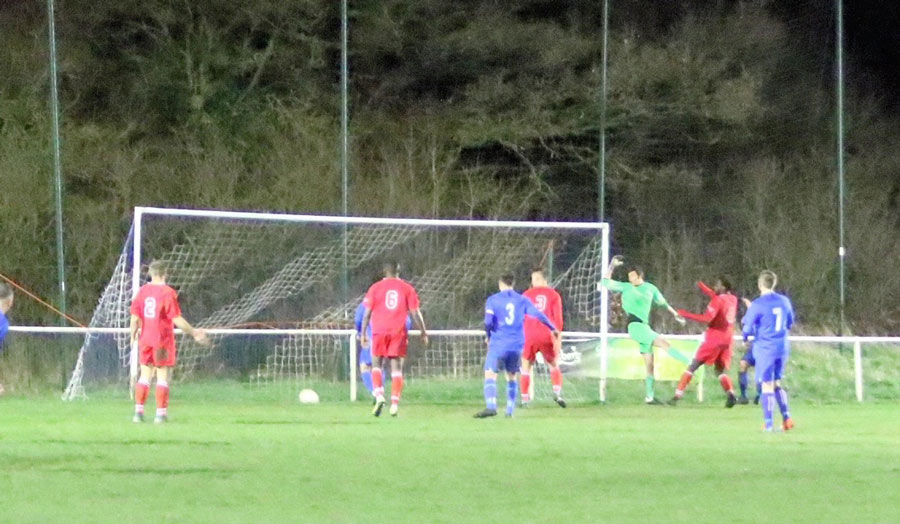 Late in the first half, Andrew Brennan was at the back post to head home a superb Jamie Speer cross, 1-0 and it stayed that way up to the break.

Jets lost Andre Lopes and Ede Osazee at the break with injuries and on went Louis Bircham and Reece Cameron. 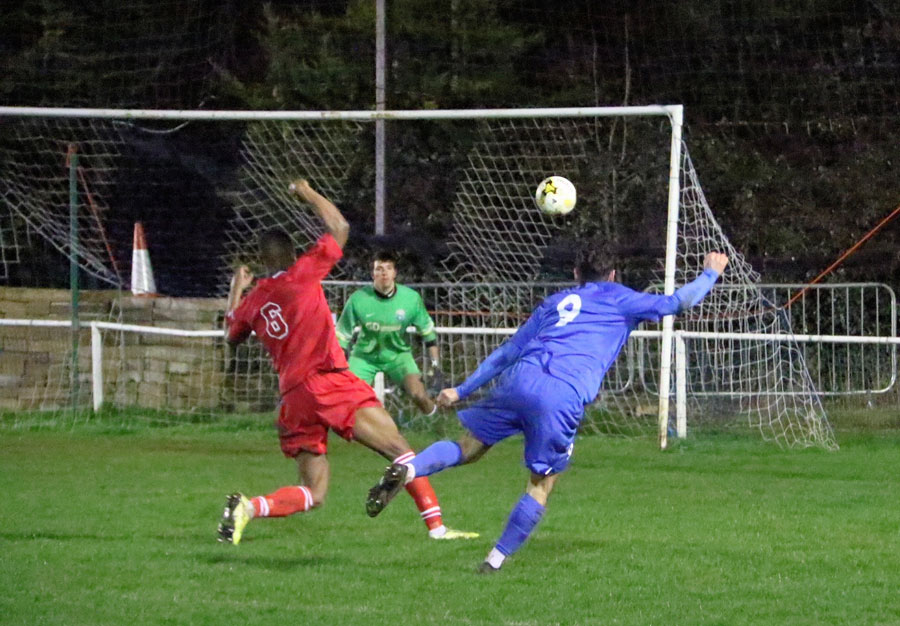 Within minutes of the restart, Nick Kerley casually chipped the keeper, but the crossbar denied, then Reece Cameron and Sean Giordmaina came close. 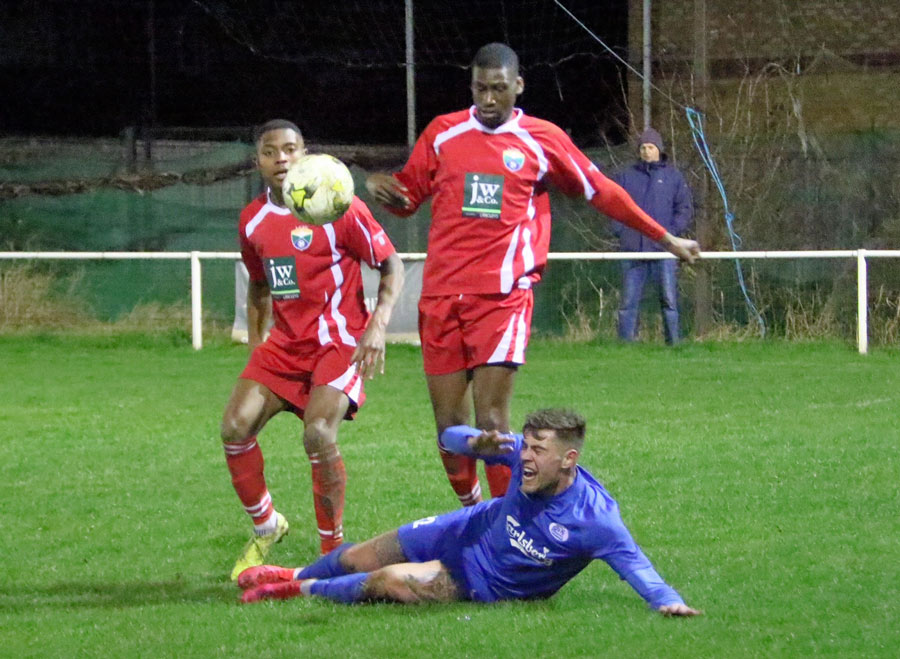 London Colney were allowed a clear sight of goal when sheer laziness allowed the gap, and they were unlucky, hitting the inside of the post and rolling across goal, then Jets had to dig in with ten men as Bircham was sent to the sin bin for an overactive mouth. 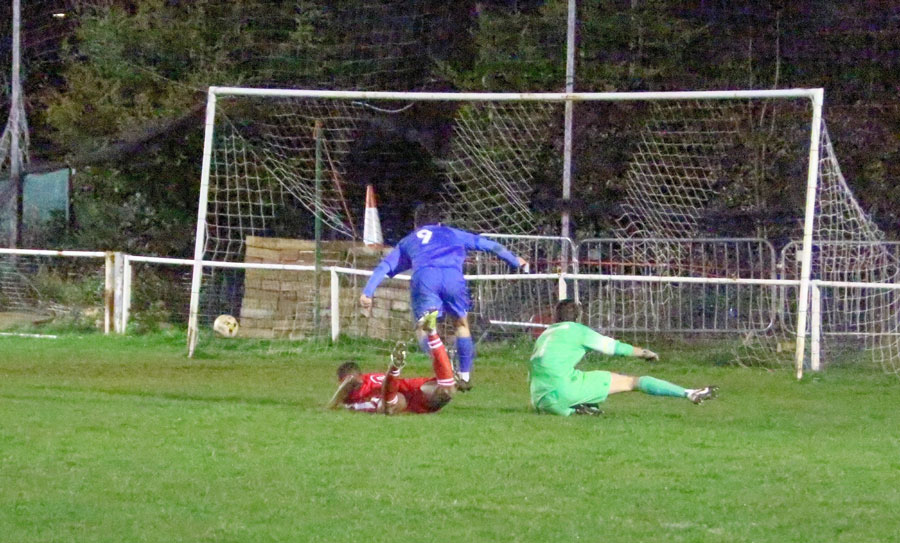 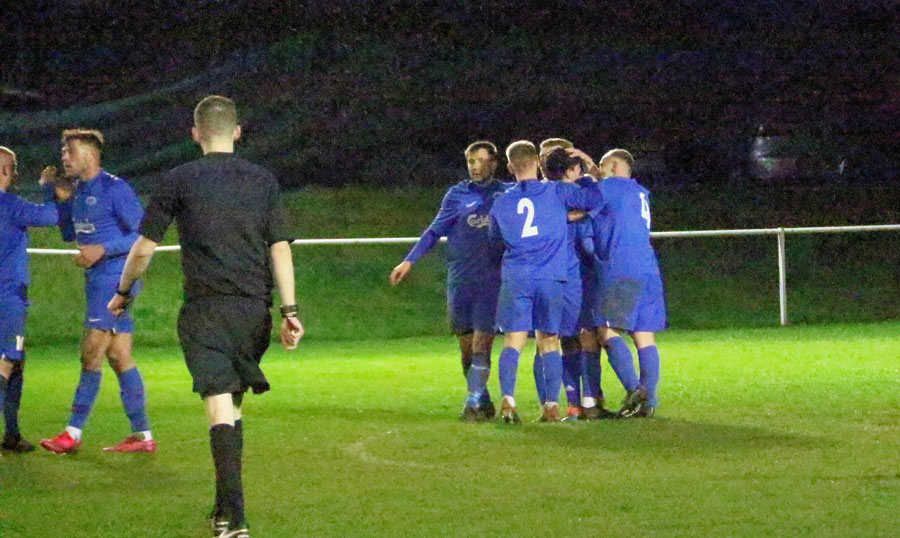 Congrats for Sean and Nick

Nick Kerley again paid dividends with a superb through ball playing in Sean Giordmaina who had the speed to burn off the defenders to slot off the post 2-0. 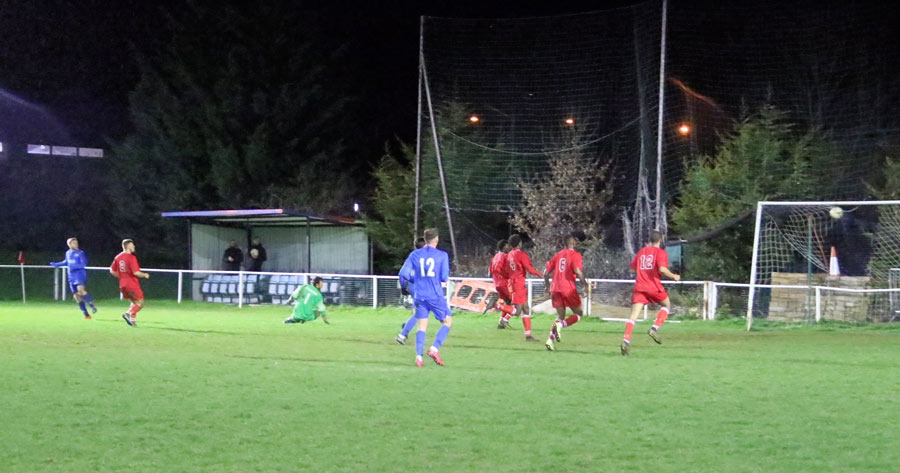 Nick Kerley strikes Jets third from the edge of the area.

The scoring was completed when Louis Bircham slotted in Nick Kerley who calmly waited before blasting home from inside the box into the top of the net 3-0.

Man of the match was split between Andrew Brennan and Jamie Speer. 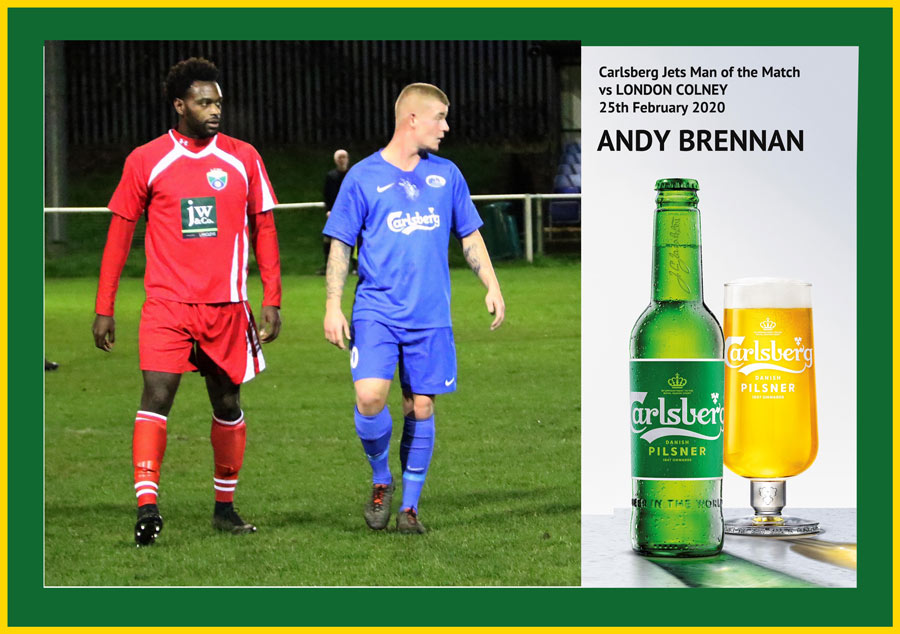 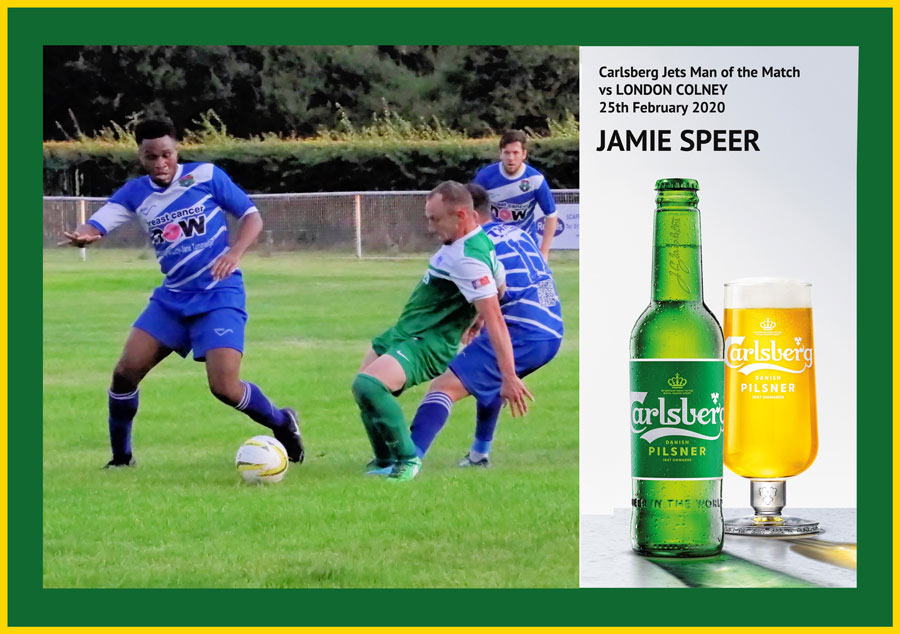 It wasn’t glorious in harsh, wet, windy and oppressive conditions, but it was efficient and job done. 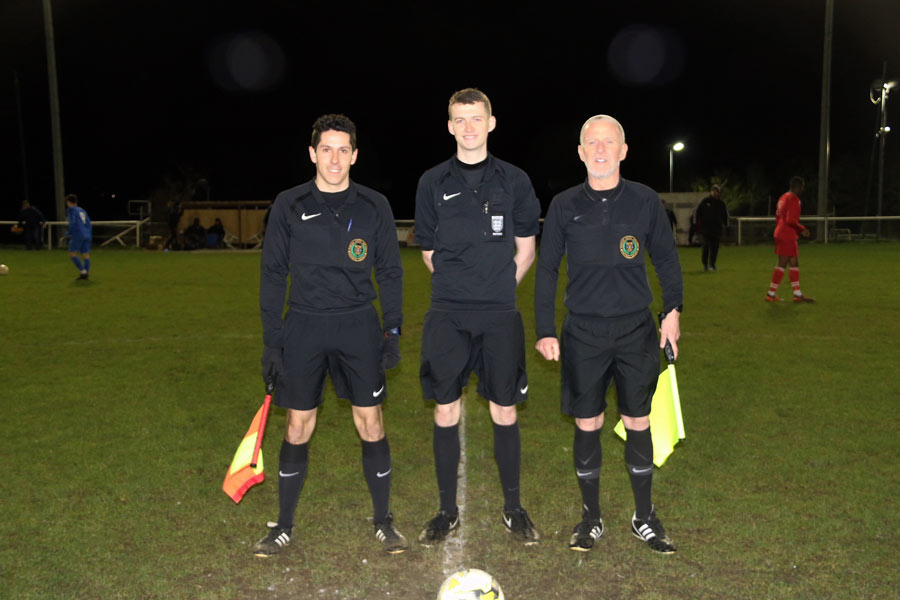