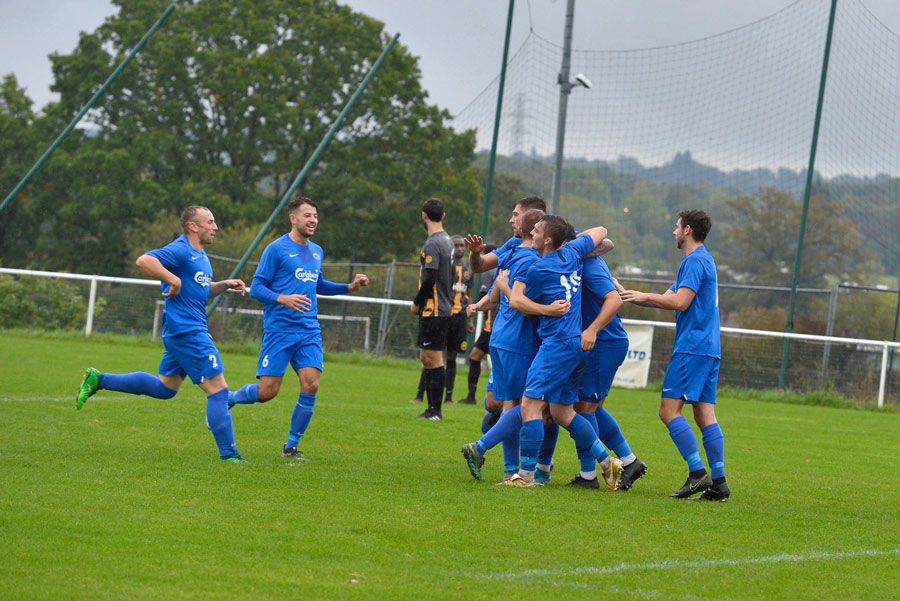 It rained goals on a wet Boundary stadium as Jets set a personal record FA Vase win, and did it with some stunning football.

Clubs and officials committed to the ‘lives not knives’ campaign.

First, and importantly, all three teams (Jets, Hackney Wick and match officials) teamed up with Hertfordshire police to support their’ lives not Knives’ campaign. We want to thank Hertfordshire police for asking us to front this campaign in the Oxhey area, and it was appropriate that they chose this match against a Hackney Wick side built on a commitment on tackling gang culture. Founder Bobby Kasanga was a former gang member who served almost eight years in prison and since his release has dedicated his life to using football as a tool to improve Hackney’s community. 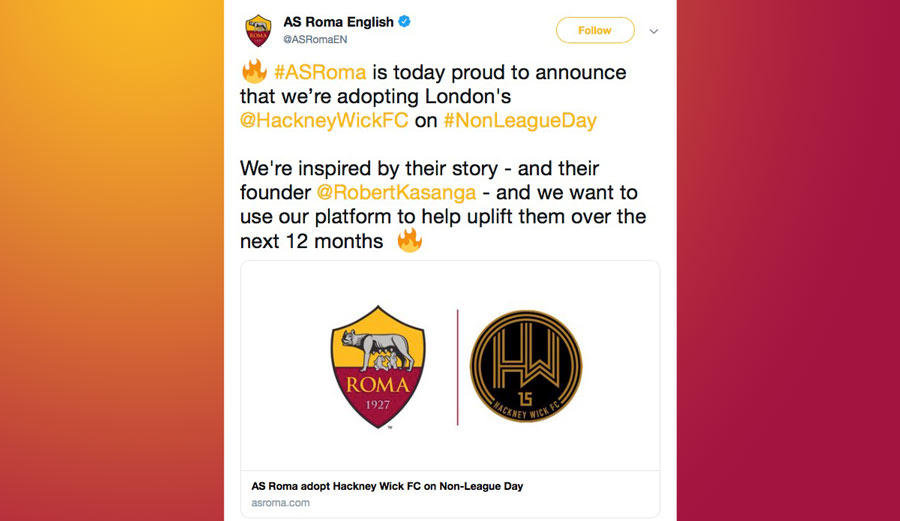 Jets started with some stunning football, and the visitors were defending stoutly to deny Jets multiple times. Early thoughts were of a repeat of Tuesday and that we’d be punished for it. 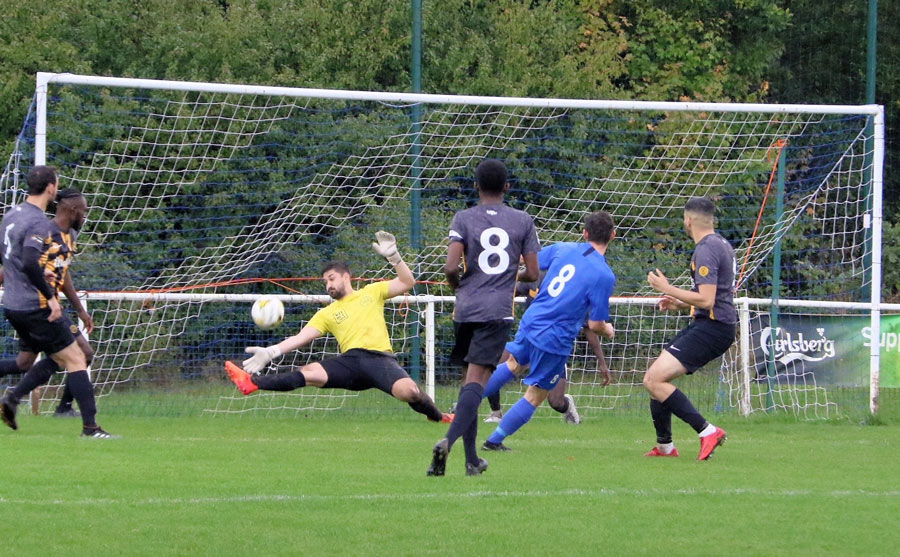 Those fears proved groundless as today we had a secret weapon in young Andre Lopes to supply inch-perfect crosses to open the gates for Jets. And how he helped, along with Nick Kerley’s free-kicks, to unlock Hackney as the theme of ‘its raining goals’ romped Jets to a five-goal lead at half time.

20mins. A Nick Kerley free-kick and Jude Bell who in the week loyally rejected a big-money move to Northwood stabbed home for the lead 1-0. 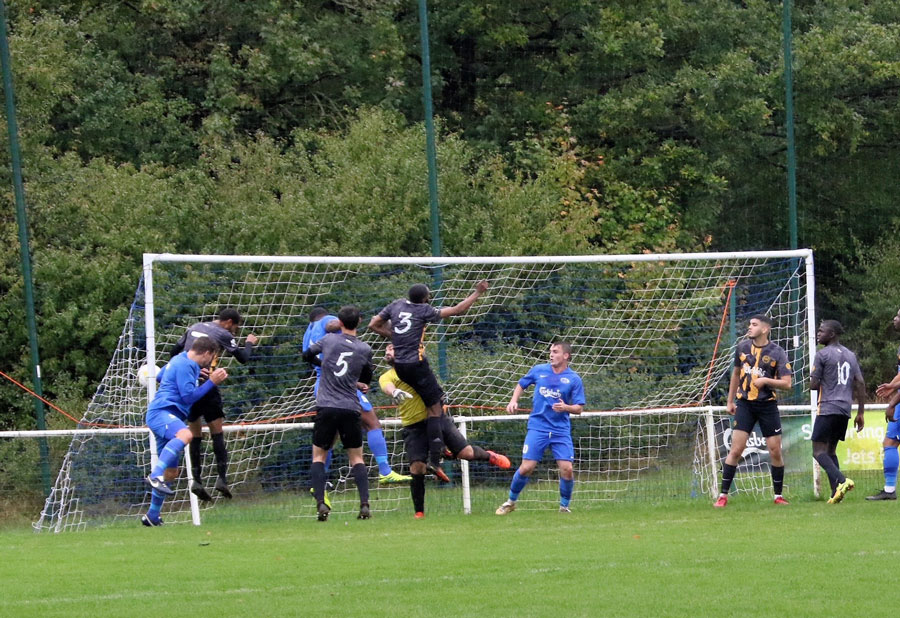 Scott Bonner (left) delighted as he makes it 4-0

37 mins. Andre Lopes corner and Scott Bonner snapped a rare shot that surprisingly stayed in the ground and into the goal 4-0 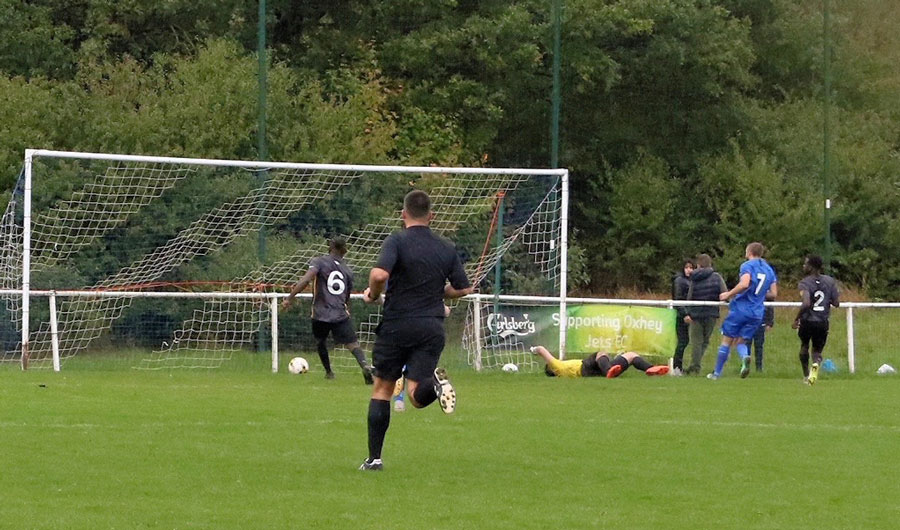 39 mins. Nick Kerley got in on the scoring act himself calmly placing number 5.

Hackney Wick were stunned and must feel unlucky as Jets were on a roll today and, in that mood, very hard to stop.

Credit to the visitors as they came out in the second half and kept trying and kept it a good clean battle. The Hackney players were a credit to their club, but last years top scorer who’s been a bit off earlier this season had his tail up, following his midweek winner he wanted more and more is what he got. 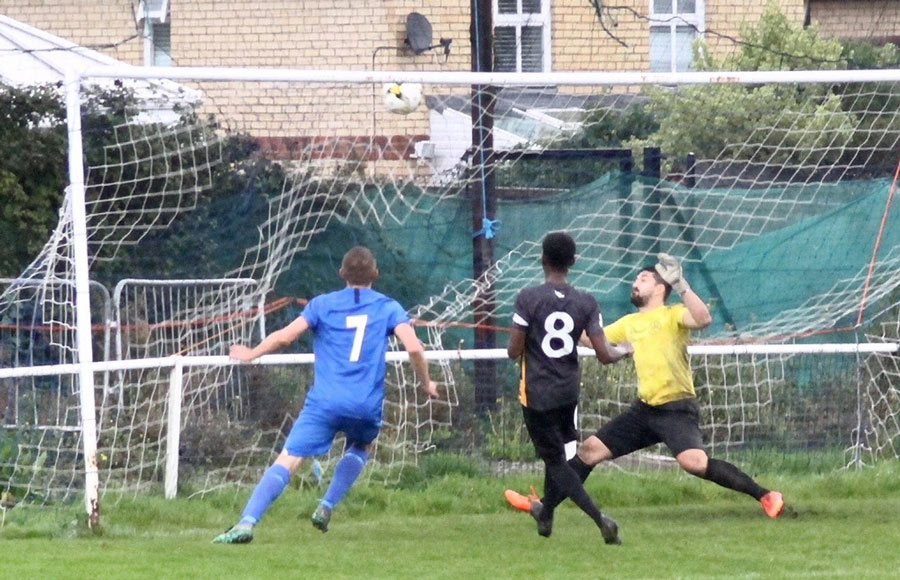 Nick Kerley has is goal touch back! 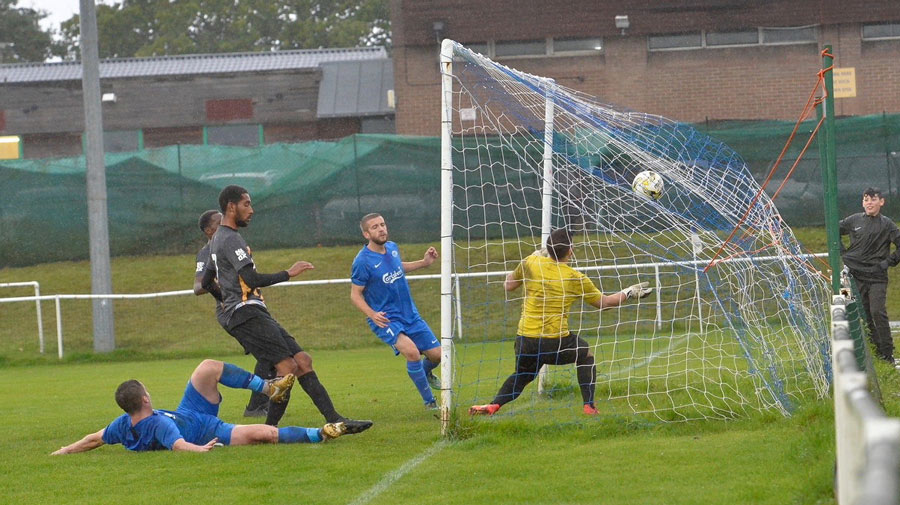 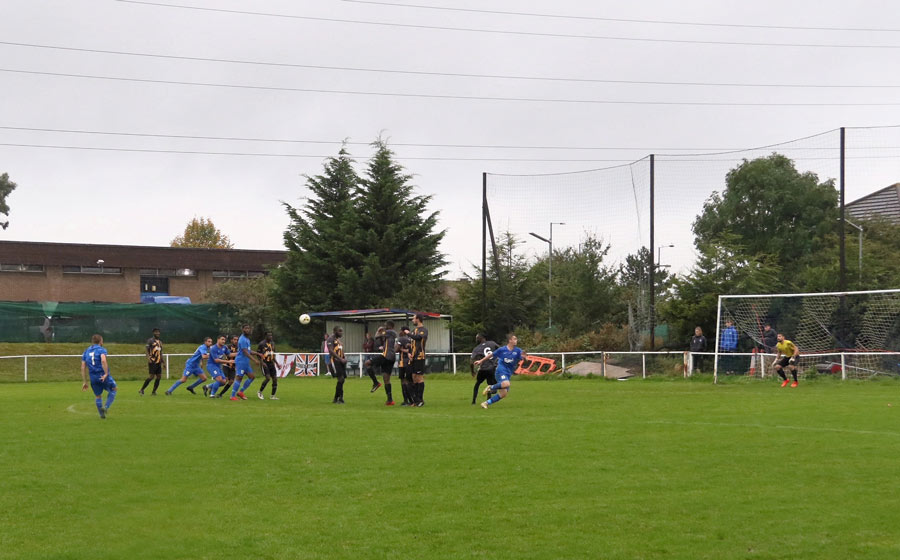 Nick Kerley strikes his free-kick over the wall.

87 mins. The champagne popper, a free-kick some 25 yards out. When it was given Kerley’s eyes lit up, he was the only player taking that free-kick! No one was taking it off him and, after a short discussion with a few players, he hit an unstoppable stunner in off the underside of the bar. Fans from both sides applauded the shot which completed his hat-trick and record Jets highest victory in an FA vase match.

The only negative part of the game was the sending off of a Hackney Wick player in the final minute for swearing at the match officials following a sin bin walk.

The draw will be at Wembley on Monday, and the ties played on the weekend of 2 November (Friday, Saturday or Sunday) 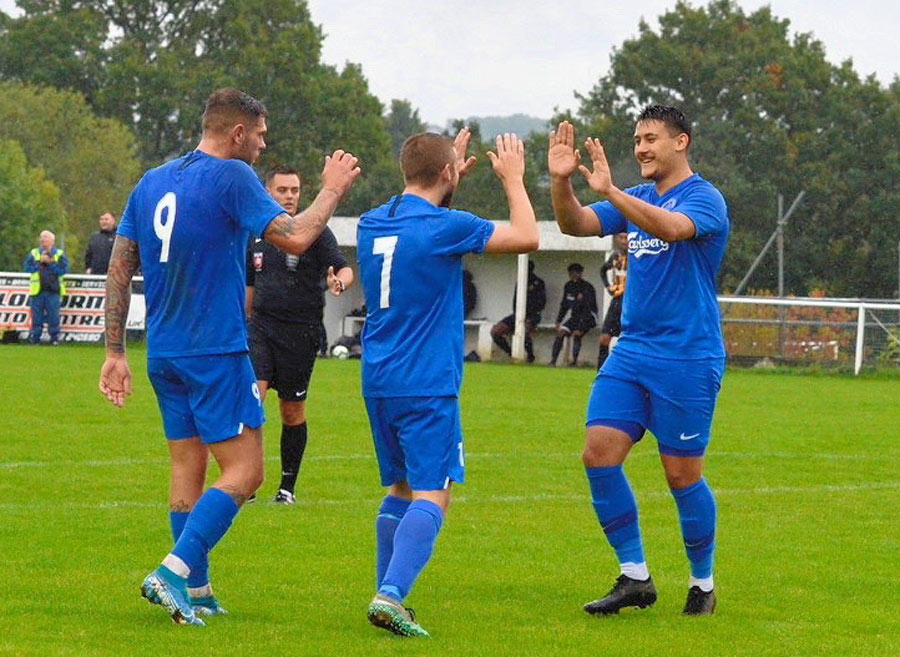 At half time Andre Lopes was right in line, and more than one Jets player was in the frame at the end, but it was unanimous hat-trick hero Nick Kerley took it for the second time in the week. Kerley is back and firing. 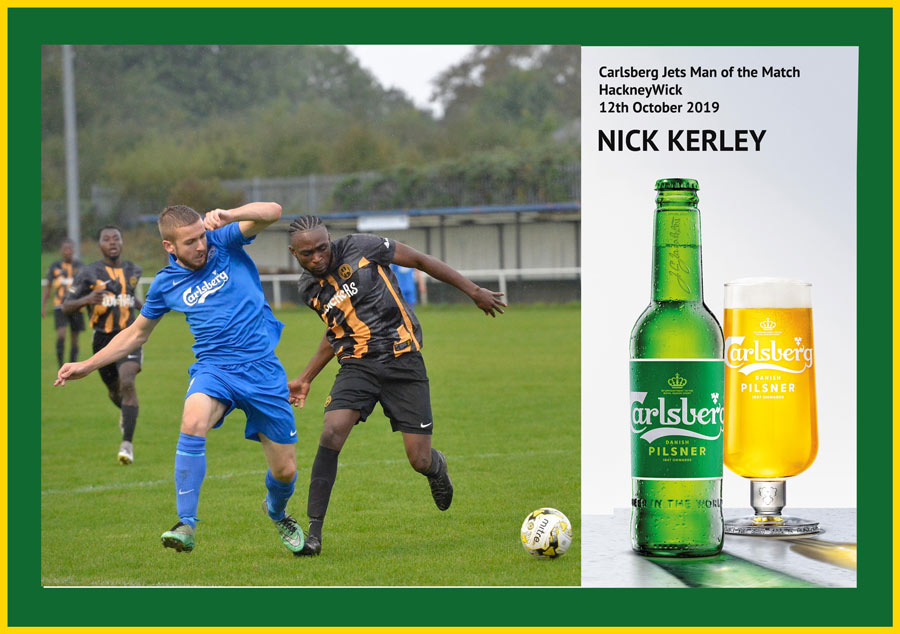 Reece not on the scoresheet, but he took a lot of the attention.

Excellent jobs by the refs

Well, would you believe it one comes along then another straightaway?

The Vets were at home to Lemsford, and the old croaks are saying we’re not done yet and banged home an excellent 7-2 win. Goals by Paul Danslow 4, John Danslow , Craig Gorrie and Paul Page.

No Reserve game this weekend.

If Carlsberg did Saturday nights ……  there would still be one cup of tea on the table!