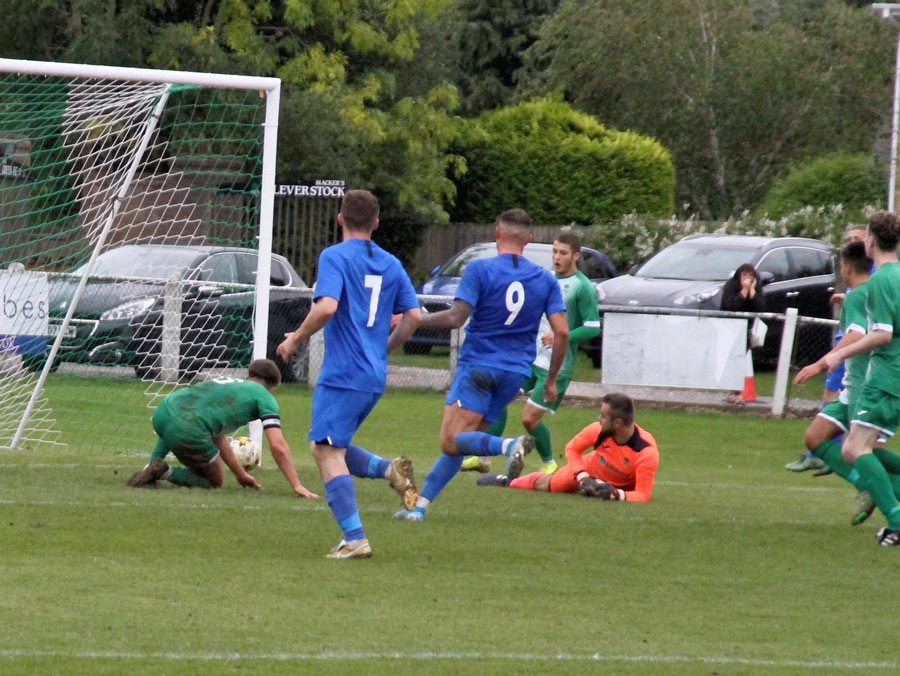 Jets drifted rather than swaggered to the three points at Leverstock Green. Although records show it as a tight 0-1 OG win, the result was more convincing in possession than chances. 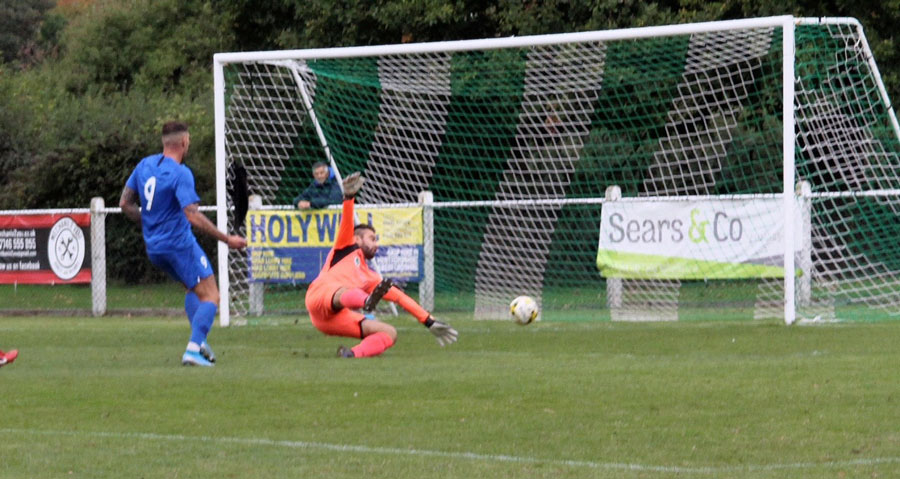 Reece Cameron’s early finish was ruled out for a tight offside.

An early slot by Reece Cameron looked as if Jets had been given the first advantage against the striker’s old club, but the joy was short-lived by an assistants flag. 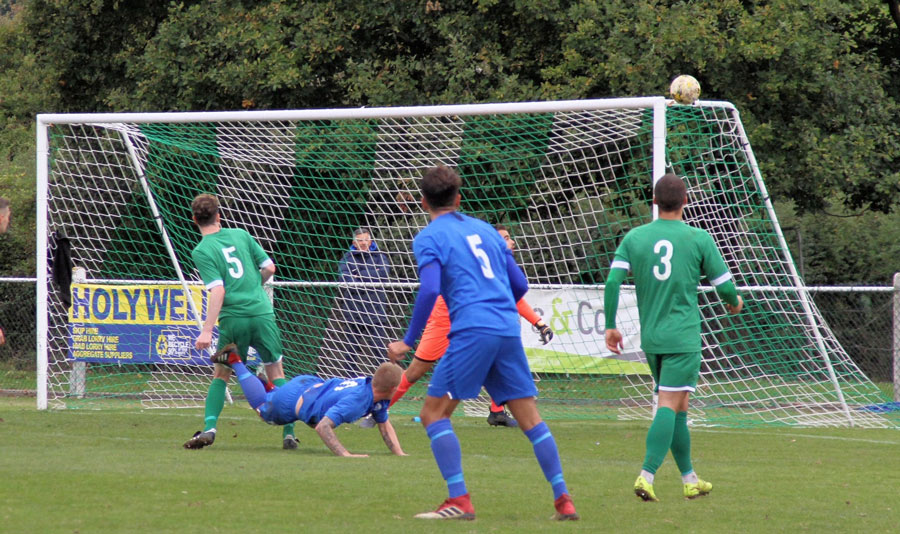 Too many Jets players looked like they wanted so badly to do well against their old club that they tried too hard and things did not happen for them. 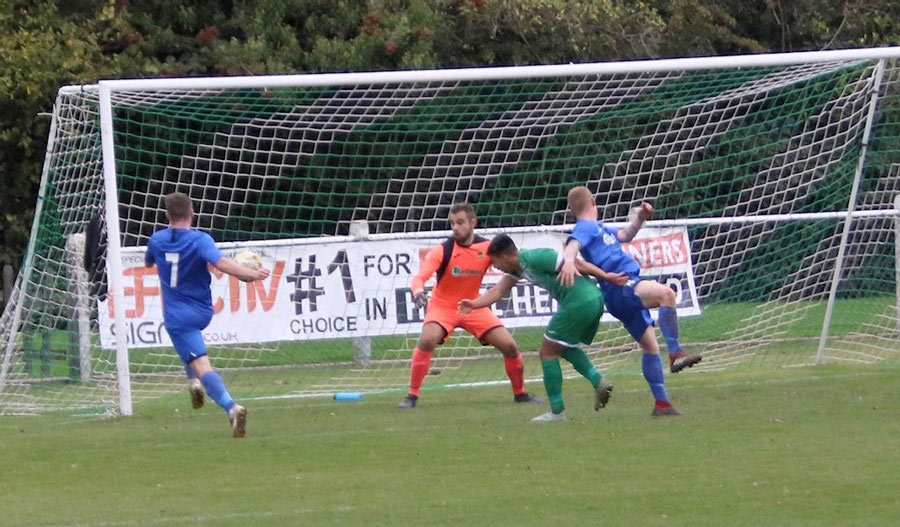 Luke Preedy goes close, back at his old club.

There were a few close calls to break the boredom of the first 45mins with Jets possession-wise probably having 60/40, but the only actual thing on target was the disallowed goal. 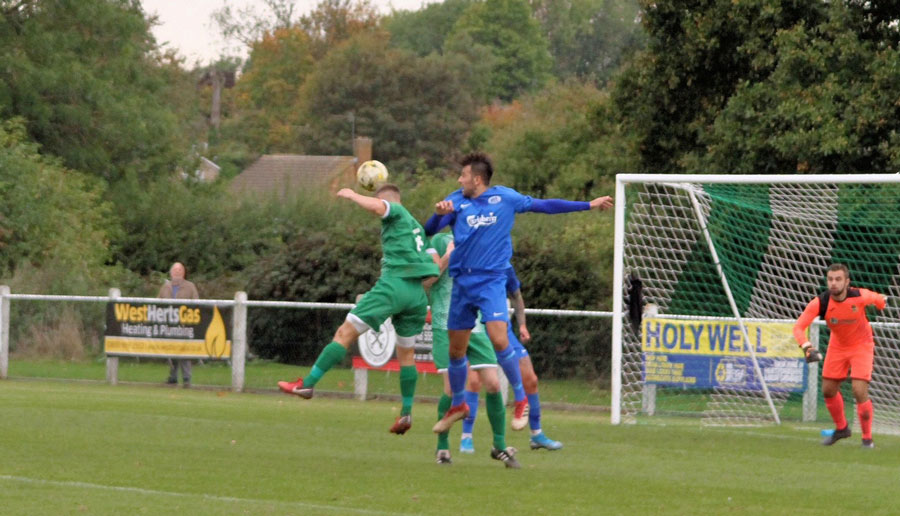 Jude Bell dominating in the air.

Neither keeper was called into action, and the Jets keeper was so well covered that he could have popped off for a bacon sandwich and cuppa. Jets were as tight as the treasurer’s wallet and, in particular, Jude Bell was dominating the aerial long ball battle.

The half time tweet, Levi 0 Jets 0, excitement 0 all but summed it up, but had Jets missed a trick as they now had the uphill half to add to the conditions.

The second half wasn’t an awful lot better. The two sides, close in the league, were not giving ground easily. Defences dominated and, when Jets did get through, the home keeper was up to the job. 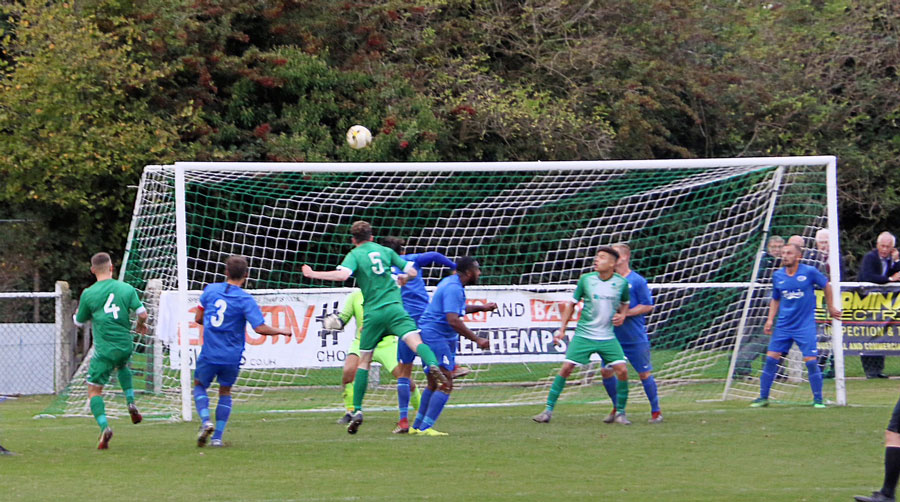 The worry for Jets with the huge slope against them was would they pay, and they almost did with a header that hit the bar. 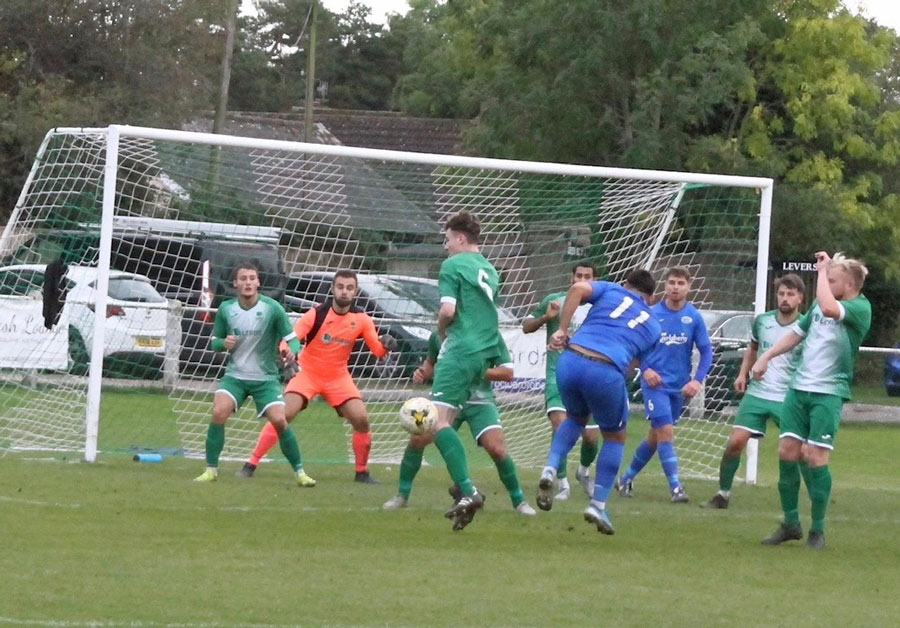 Andre Lopes has his shot blocked.

The breakthrough for Jets came via an inspired substitution by stand-in boss Pat Fallon. Last season’s top scorer Nick Kerley came on, and within minutes it brought Jets the win. 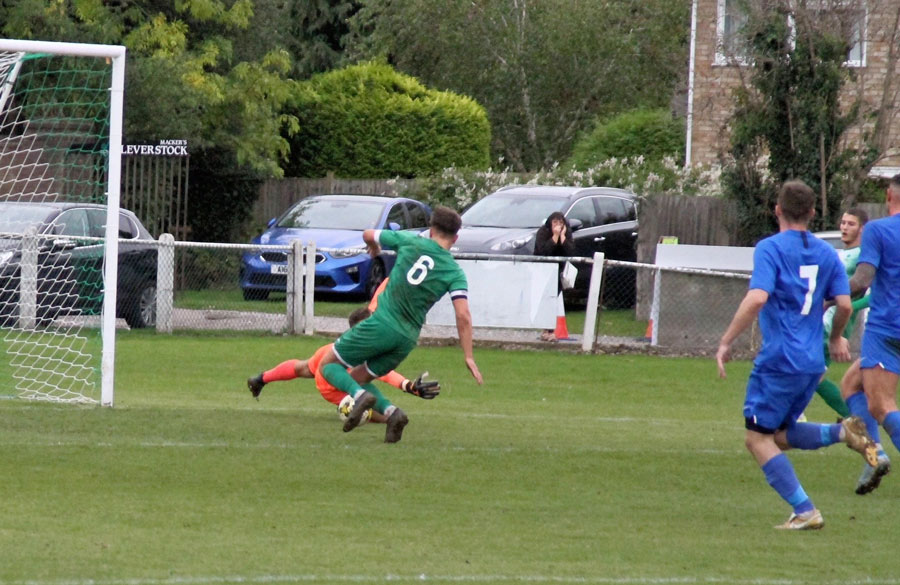 Nick Kerley cross comes in and causes chaos in the Levi defence. 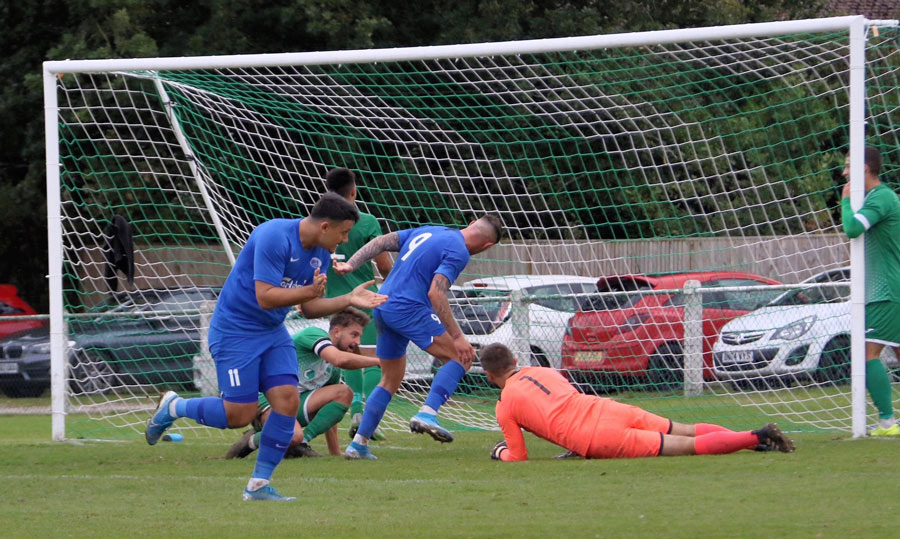 Delighted Jets have the lead. 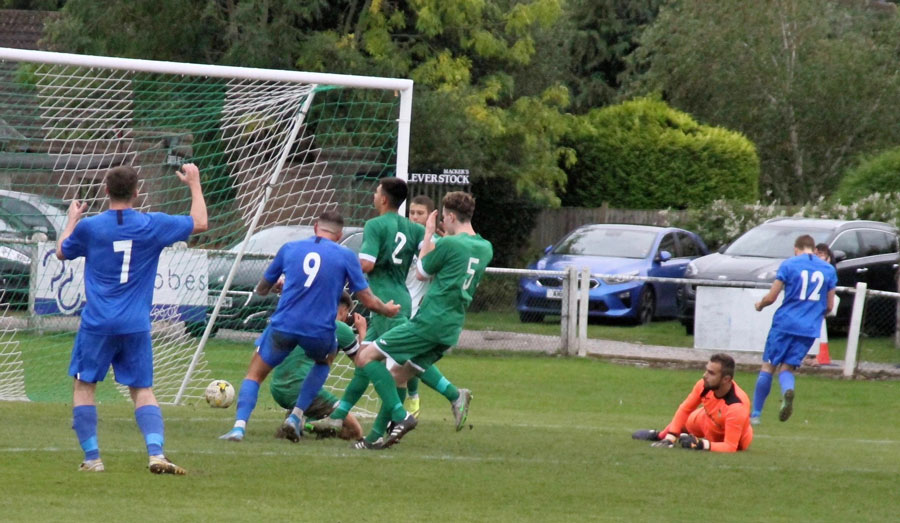 Nick Kerley (No12 right) turns away to celebrate has his wicked cross is deflected into the goal. 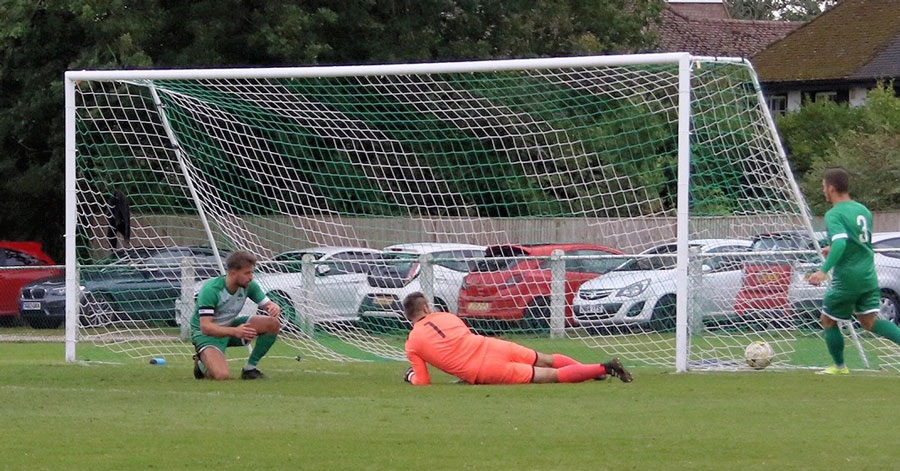 Unfortunate for former Jet John Smith who turns the ball into his own goal.

Kerley ran straight at the defender, crossed a wicked ball and Leverstock skipper and former Jets player John Smith, under pressure from Reece Cameron, got the unfortunate touch for an own goal. 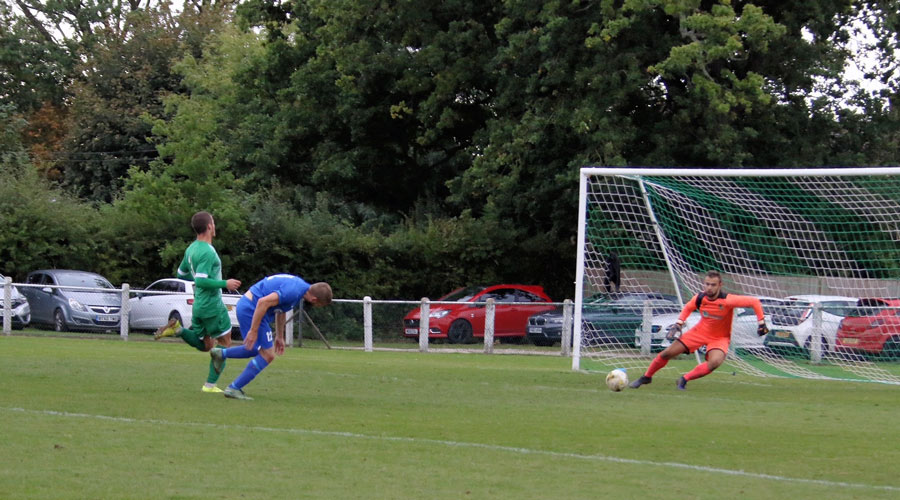 The home side had to come out, and Jets had chances to finish the job, but some excellent defending, a great save, and missed opportunities denied more, and it ran out to the 0-1 finish. 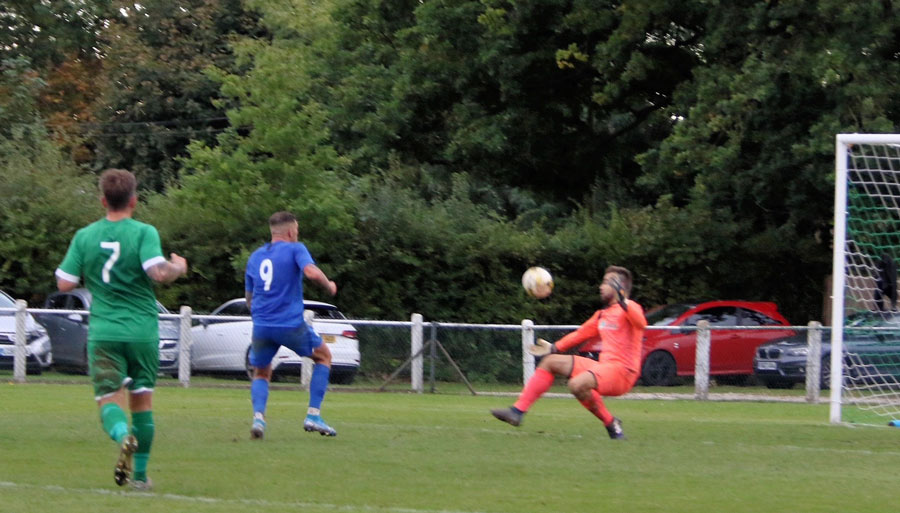 Jets were not poor today, some of the football in the build-up was excellent, but the final ball was the problem most the match. 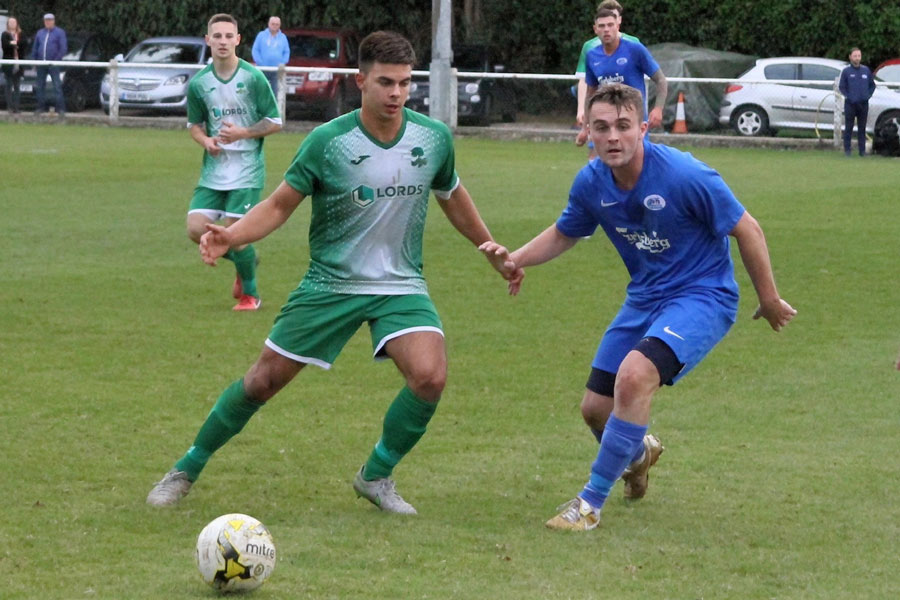 Luke Preedy did well back at his old club.

Man of the match was competitive. Leigh Stevens worked tirelessly, Jamie Speer was excellent and must have only just missed out, but the Carlsberg Man of the Match went to Jude Bell against his former club. 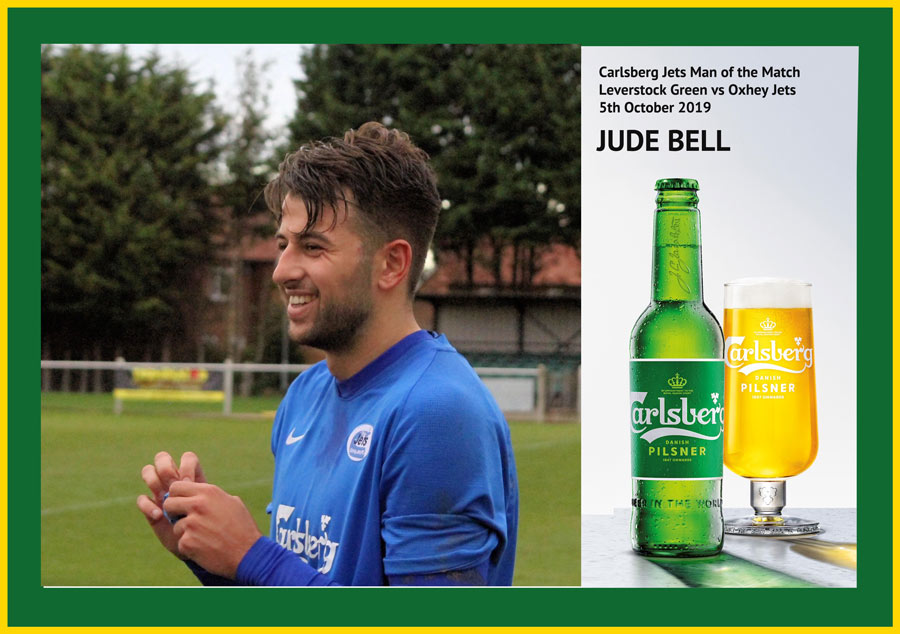 It was 3 out of three again for the club, the fourth Saturday running.

Jets Reserves were playing in the Hertfordshire Century Trophy for the first time, a competition the first team had a long and successful love affair with on their way up the pyramid. The opponents were Knebworth (1st team). Jets took a 2-0 lead, became 2-1 as Jets pushed, and then 3-1 went back to 3-2 as the opponents refused to surrender, but Jets ran out 4-2 winners to earn a home match v Chipperfield (1st) in November. Rawn Seale scored another brace, and Finley Sykes and Tyrese Wolfe scored a goal apiece. Luke Peters getting the man of the match award.

The Vets completed the great day with a 2-3 win away at Lemsford.
Craig Gorrie getting one and the young guns Owen Ayres and Jack Voss the other two. Voss, a Jets youth team player, has now scored the winning goal three times in his four senior matches.

Next up for the first team Tuesday v North Greenford United @ Jets 7-30 KICK-OFF.