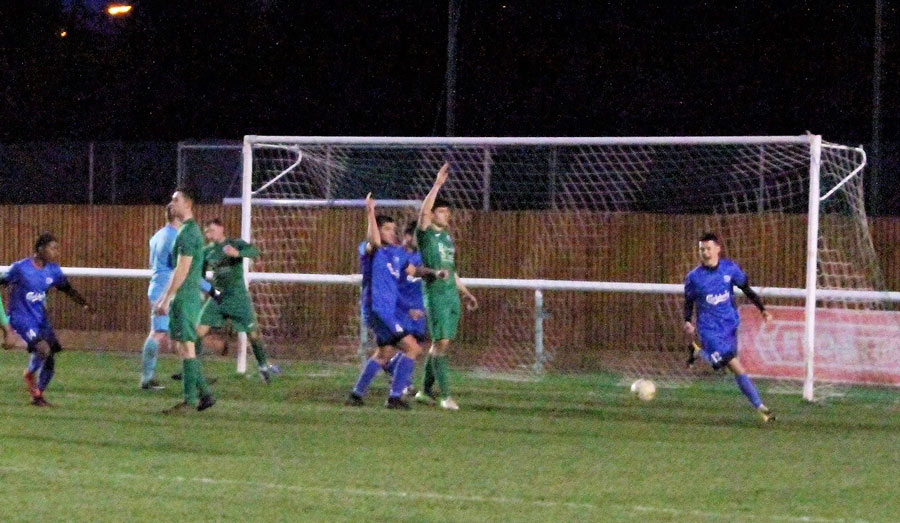 Another Bigg Result for Jets

One week on from the terrific last gasp victory at 4th placed Biggleswade Utd, and Jets headed back up the A1 to play, arguably, the Spartan Premier Champions Elect Biggleswade FC. For the second week running, and for the 4th time up the A1 this season, Jets came home very happy with another Bigg result, this time with an excellent point against an impressive Biggleswade FC team.

Jets knew this trip back up the A1 again to face FC fresh off the back of their fantastic FA Vase result last Saturday was to be very testing. Jets had injury problems today, and the injury list got worse when a list of calamities caused the very late withdrawal of leading scorer Nick Kerley. Jets reshuffled and went with the youngsters, and they did not disappoint. 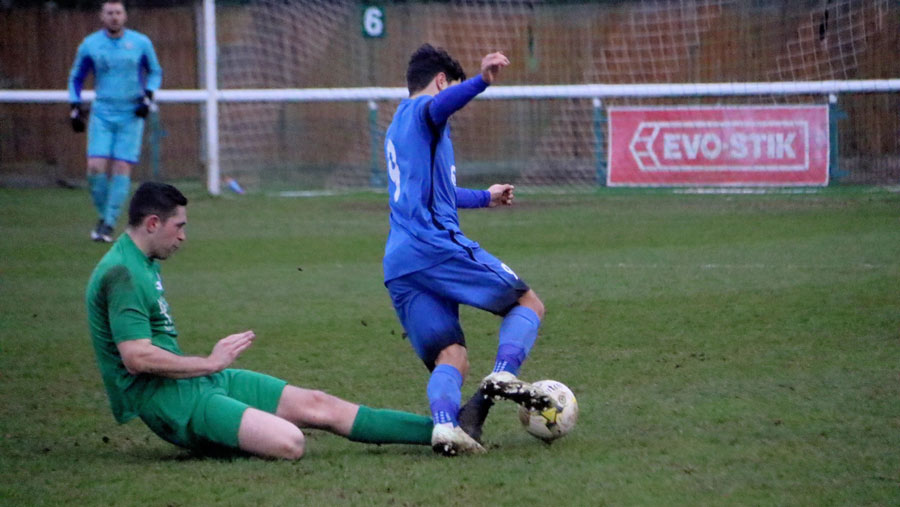 Jets did well with Sean Giordmaina operating solo up front in Kerley’s slot and by sheer graft created Jets first two chances. The first was saved by the keeper at the post and the second, after he steadied and took what looked to be the opener forced an incredible last gasp toe save, deflecting it for a corner.

Super save from Matty Evans 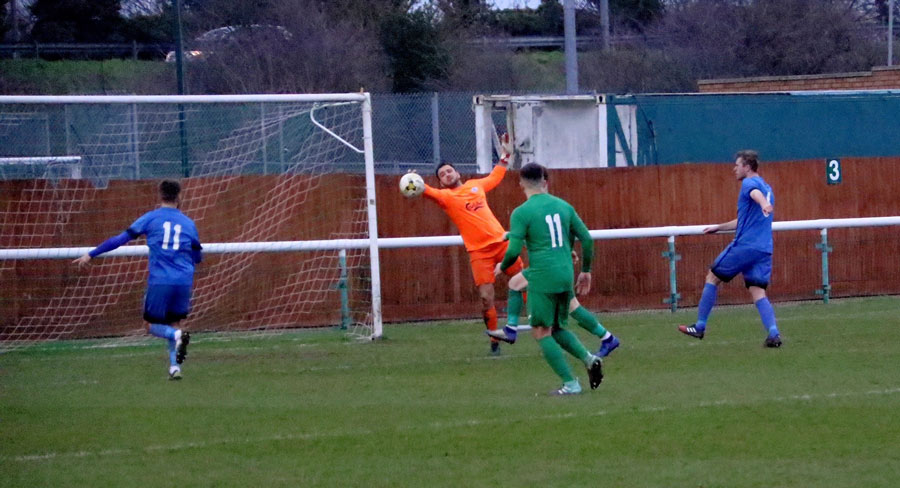 Enter Matty Evans the Jets keeper who was not feeling well as he entered the pitch but was all but perfection with two stunning saves to hold Jets solid against their classy opponents.

FC then had a let-off as the bounce beat their keeper and for Jets, it rolled inches the wrong side of the post. 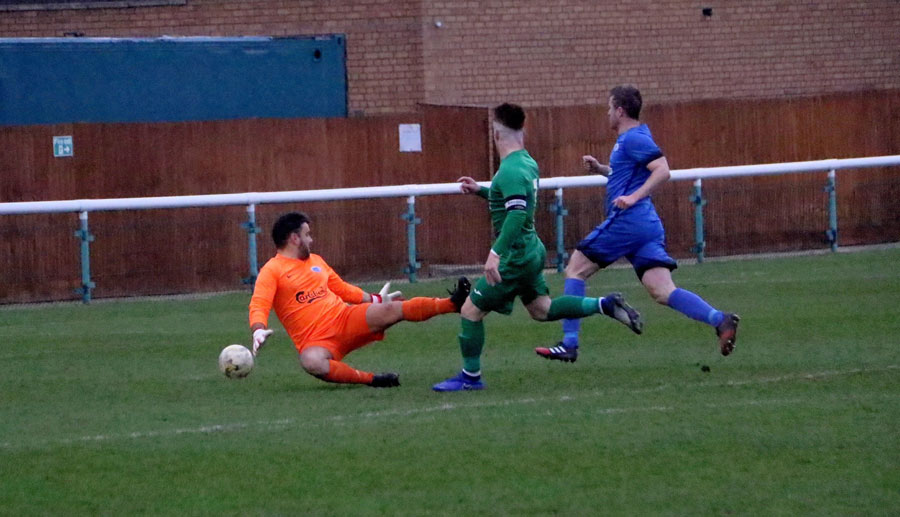 Jets knew they could not slip, FC are one of the quickest slickest speedy attacks in the division, and the point was proved when disappointingly sloppy play discipline cost them, their own throw-in lost far too easily and the fast break and calm slot and FC were on their way (26mins).

It was competitive and played in a great spirit which was a credit to both sides and at the break and just one goal it was still anyone’s game. Now if we needed reminding that last year we were 6-0 down here at HT and 7-0 at the end then one of their supporters kindly !! reminded us on a tweet. We thank them as it was a reminder of how far we’ve come since those grey days and this season’s wins at Potten and Biggleswade United and a good draw at Baldock. This all helped to boost the rally call by the boss.

The second half started end to end, Jets matched their possession, but FC were building the shots and chances ratio more, and Matty Evans more than once pulled off the stopper. 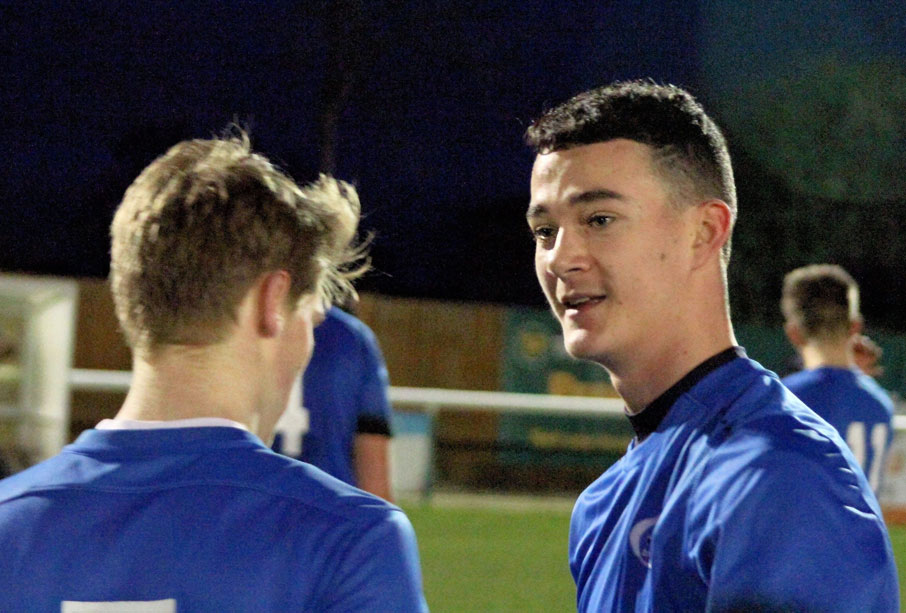 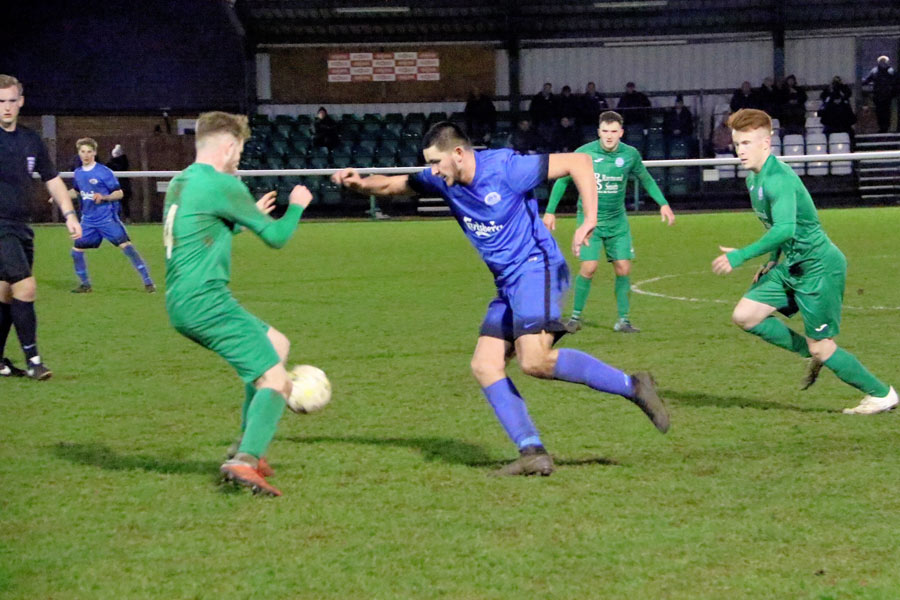 Jets, however, were slowly edging more and more into the game. Sean Giordmaina was then lost to a precaution injury protection, and George Hobson was changed for a young debut. 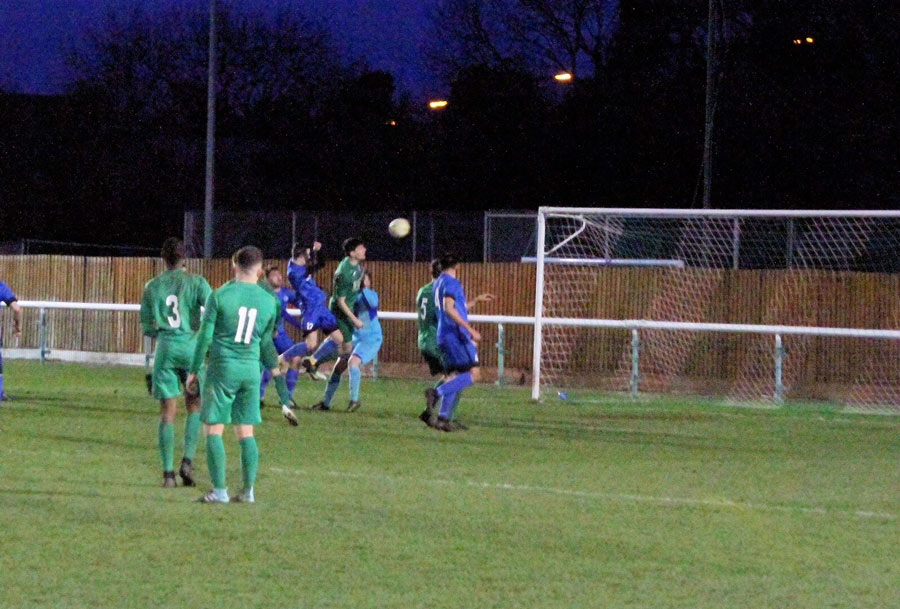 Ollie Lawford with a peach of a header 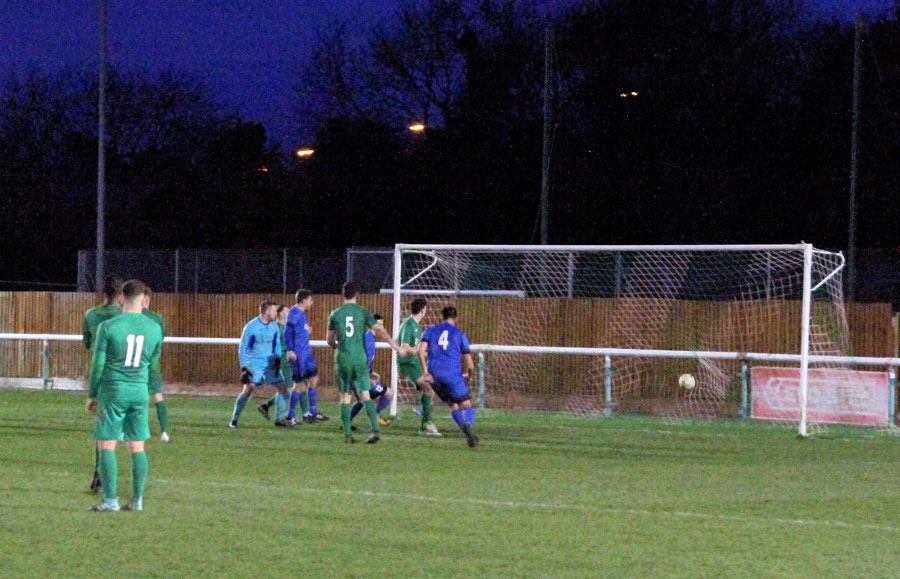 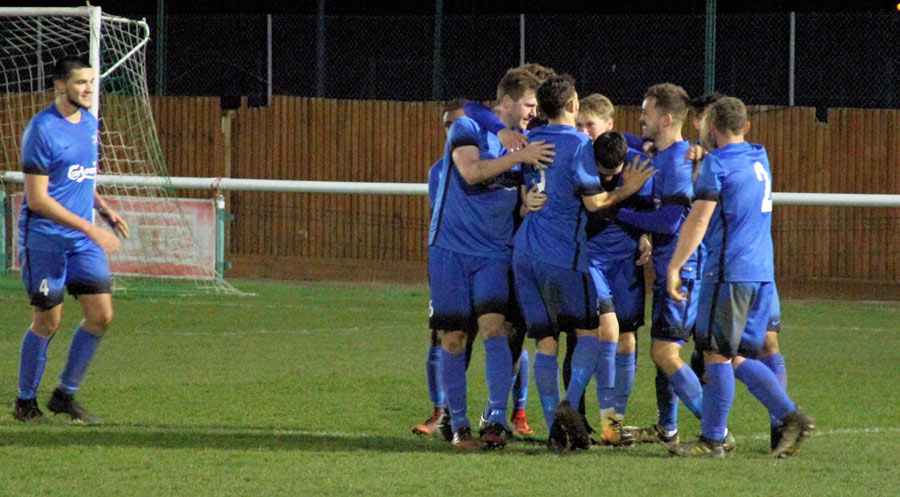 Then with just four minutes to go, it was super-sub Ollie Lawford who rose high to head homewith perfection from a Luke Jones cross (86 min). 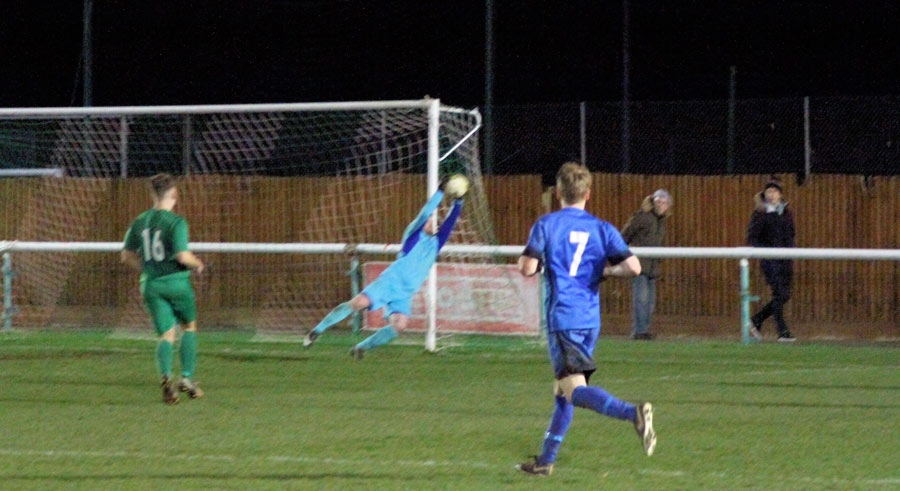 A super save denies Luke Jones a late winner

Would Jets settle for a point? Nope they went for it, and a stunning save from the FC keeper from a blistering Luke Jones shot denied Jets the three points. FC then could have won it as in the 93rd minute of the 93 they headed a chance onto the crossbar when scoring looked bolt on.

The whistle came to mark an excellent point for Jets. FC will be disappointed not because Jets were lucky, but because their standards are high which is a testament to how well new Jets did today. 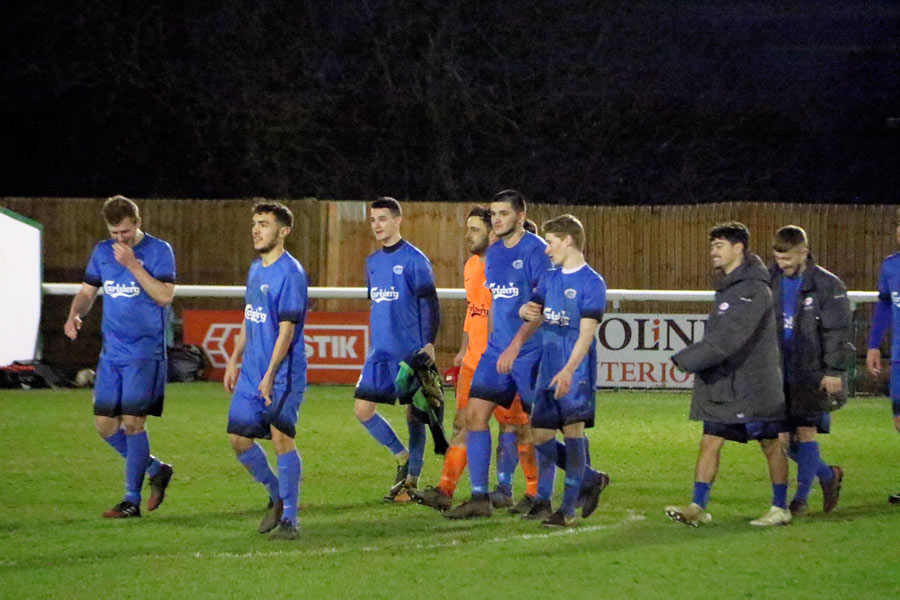 Jets happy with a good point at title chasing FC 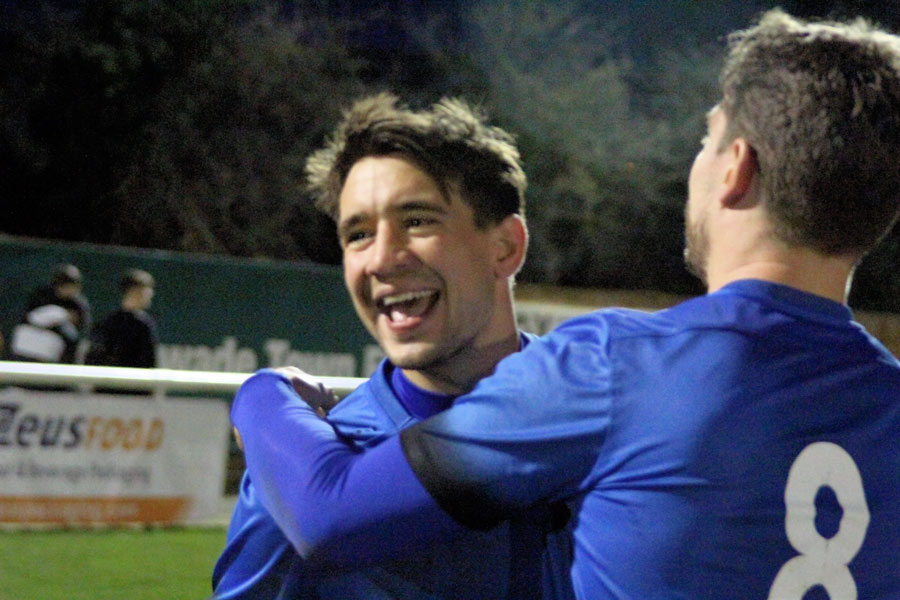 Jets Man of the Match saw many in contention, but the boss picked and he went straight to Matty Evans whose saves made the point possible. 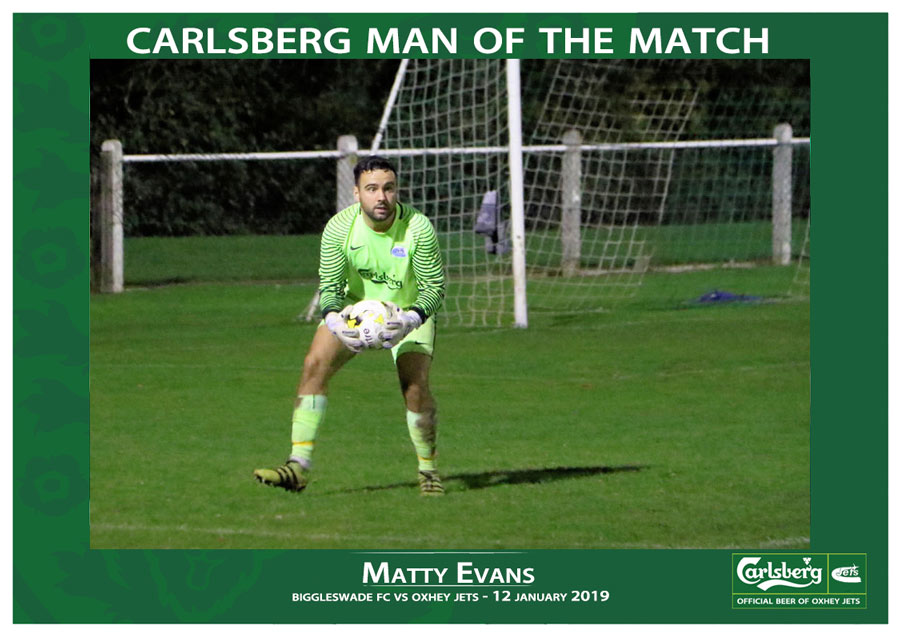 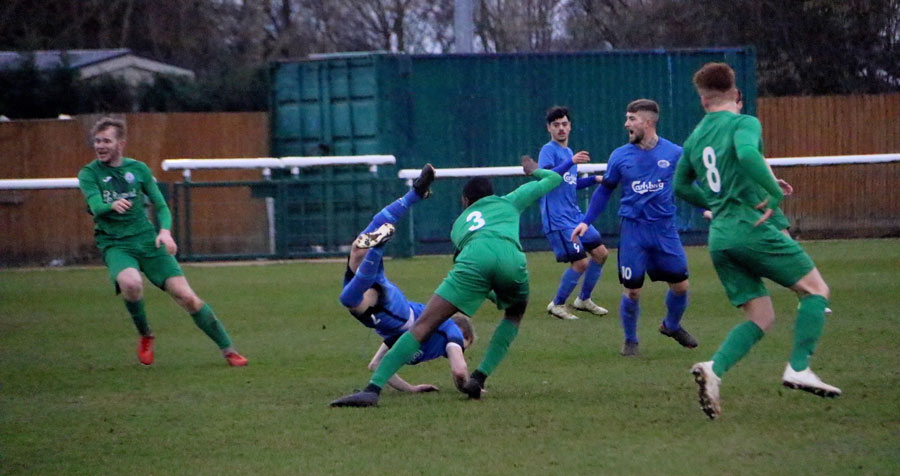 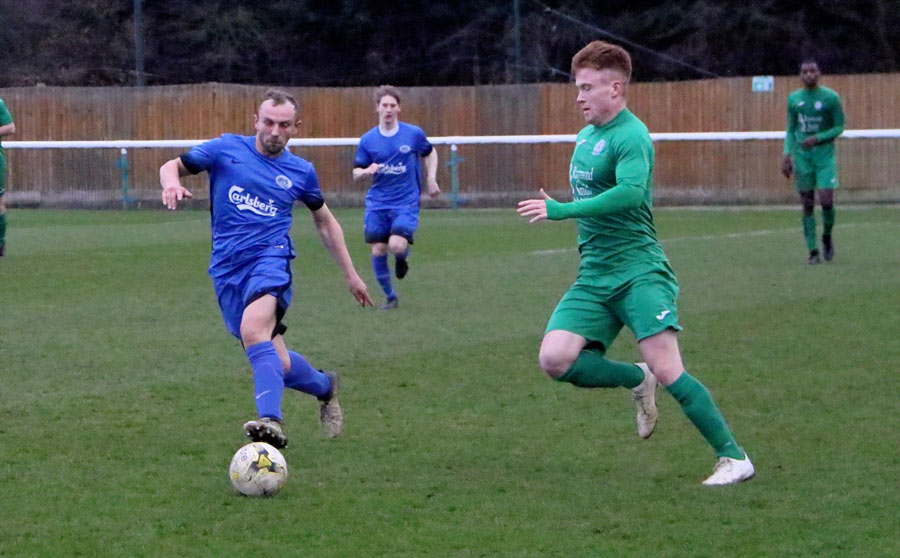 Jamie Speer so solid in defence

Jets are showing, as Tim always says, work in progress and they sit with some big budgets behind them at the halfway mark.

All still possible so far and too early to predict who will be up and down, but if I were having a sportsman’s bet I’d say we took a brilliant point away at the champions-elect today, so with both matches for the season played, we may not meet again for at least a couple of years.

In closing, we must as a club wish Biggleswade the very best of luck against Windsor in the FA vase as Wembley is getting very much in view as they are the last team flying the SSML colours.

The Reserves bounced back from last weeks defeat in style coming back from a goal down at the break to win 3-1 against a strong Hoddesdon team who worked Jets all the way. 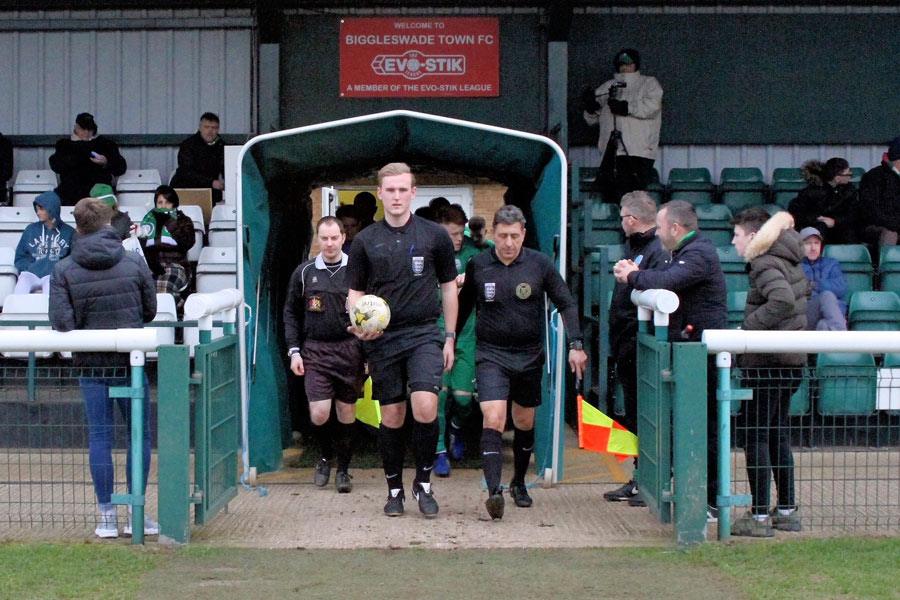 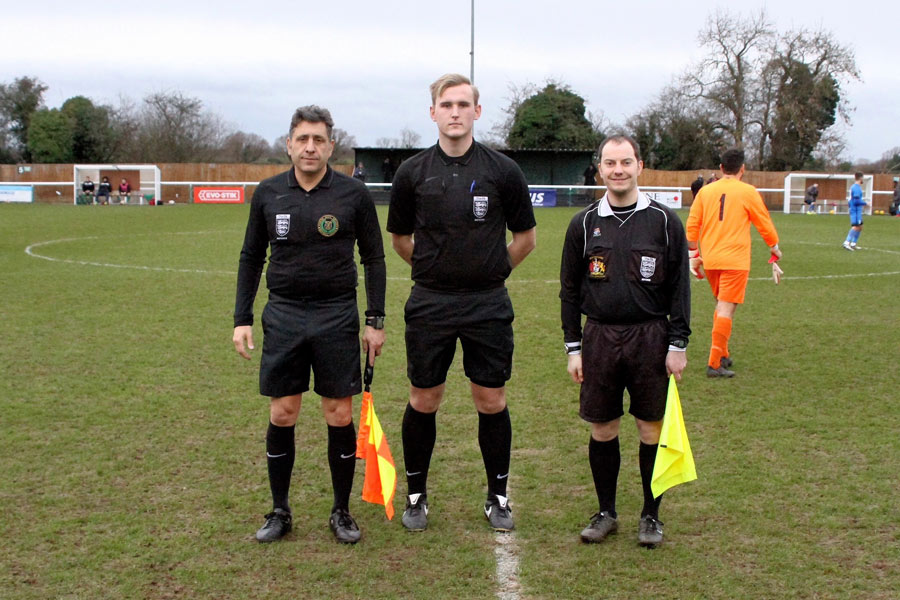