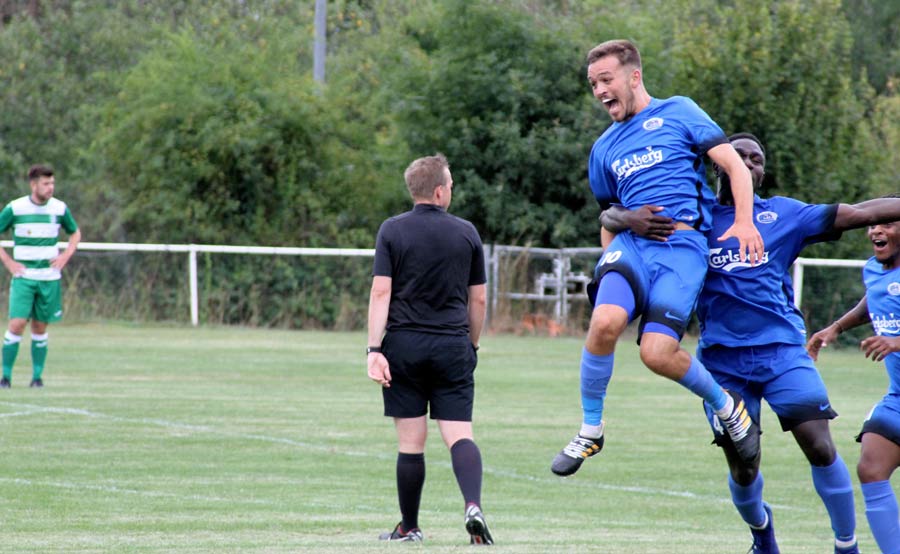 Jets fall at the first hurdle, gloom, doom… NO – none of that as the players today came the closest I’ve seen for three years to the “old Jets” spirit, coming back and breathing life back into the team on and off the field.

Tim’s halftime talk sparked a magnificent comeback, an exciting match and a very unlucky exit from the most famous of trophies. It was so good to see 20 players in a pre-match team talk together raring to go, dressed in club shirts looking like a team again.

Wantage were firm favourites and for Jets, a bad draw, not because of the club but how good we knew they were in the Hellenic Premier, so we had to be at our best, and Tim makes no secret we are a work in progress as he rebuilds the team from top to bottom. 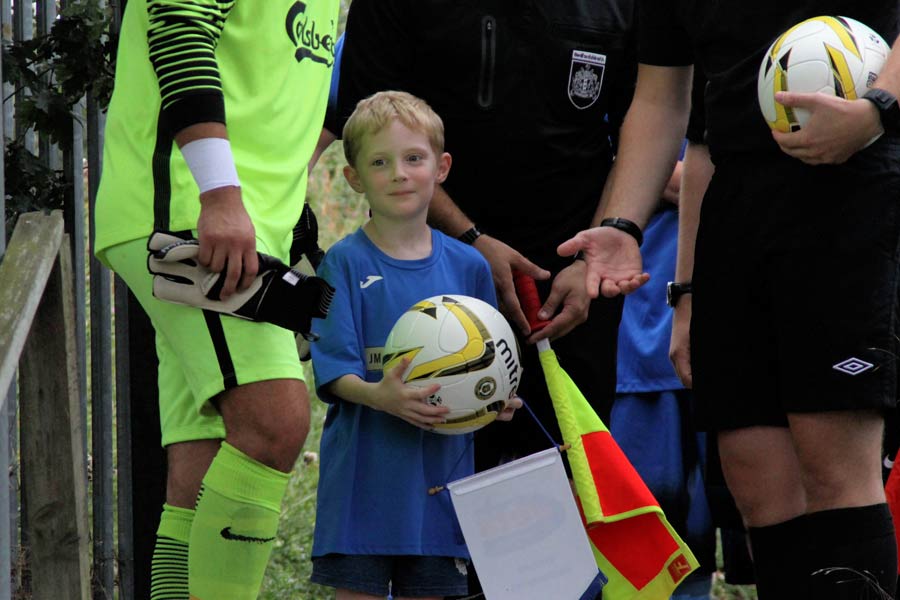 A mention for the country’s youngest ground hopper Liam Priday who has now been to over 200 grounds and was the Mirror’s fan of the season in 2016. He was presented with a Jets pennant pre-match to act as a memory of his visit to us by Jets founder and General Manager John Elliott BEM. He was also asked to lead the teams out and swop mementoes pre-match with Wantage Town FC.

The first half saw the visitors in total control dominating the midfield battle with Jets defending deep and well to hold them at bay. Jets were second best, and Nick Kerley looked isolated up front as his support was forced to drop back. But for all the dominance of possession by Wantage, Jets held them almost chanceless and shotless as far as on target, so they were doing their defensive job correctly and were trying to spring the offence.

Wantage take the lead from the spot.

30 minutes in a decision swung the match to the visitors when Vass tackled, and the referee went straight to the spot and Chris Jackson converted. In the balance of fairness, both benches felt the decision was harsh, but at halftime, Jets players made the referee correct on the call. 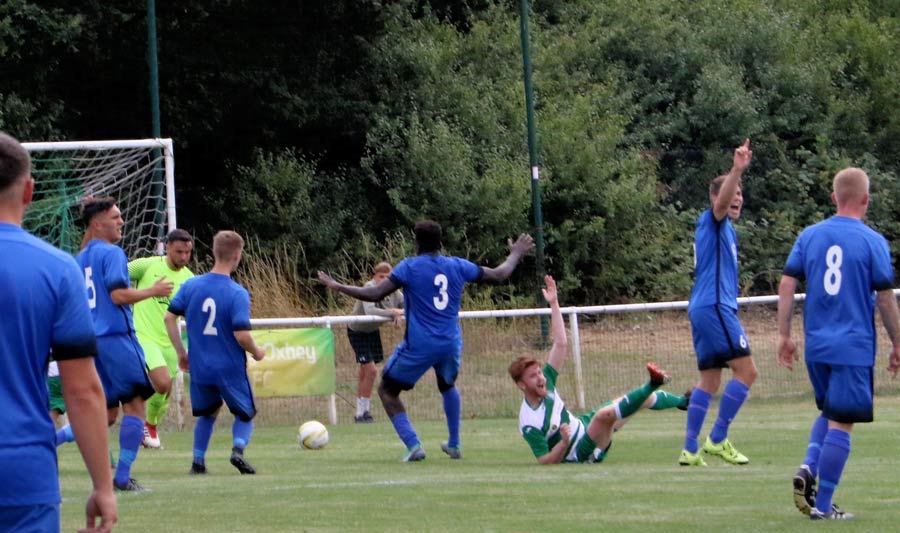 Big shout for another penalty for Wantage.

Jets wobbled, and the visitors had another big penalty shout that was turned flat, it looked more of a shout than the first one! Jets held out for the break and were relieved to get in just a goal down at the break.

Tim O’Sullivan was not happy, and it’s fair to say the players soon realised that!! So would the “words” register an improvement? Well no, Jets were caught cold within two minutes when Harvey Scholes headed home No2, and it looked all over for the hosts. 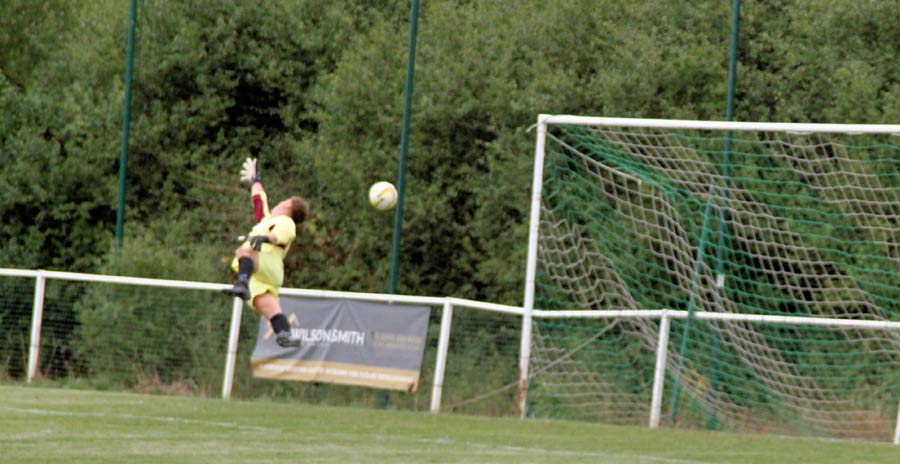 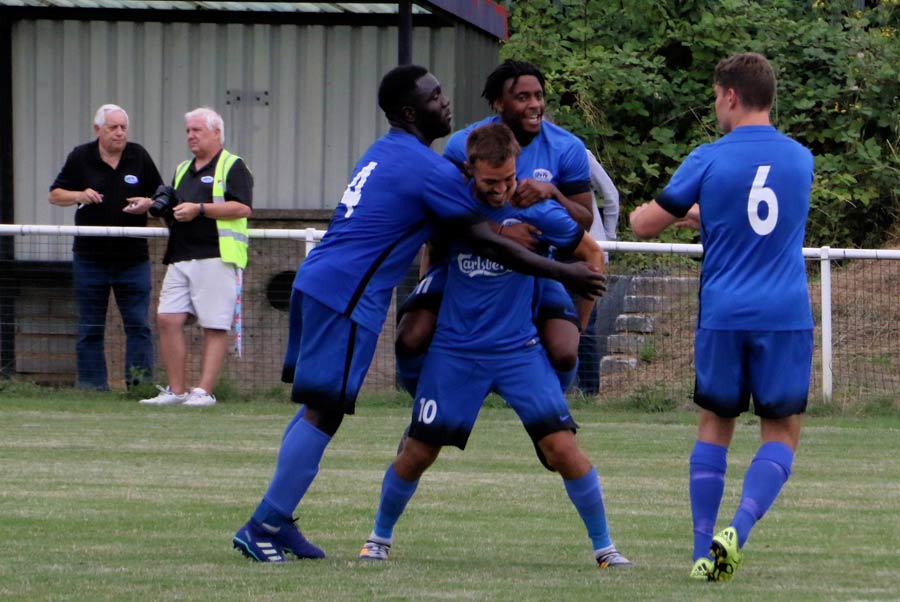 Now a different team suddenly emerged, and Jets came alive, sweeping forward, good football and adventurous. Then a super strike from Luke Jones, a stunner in the top corner, blew the doors open for the Jets (51 mins). 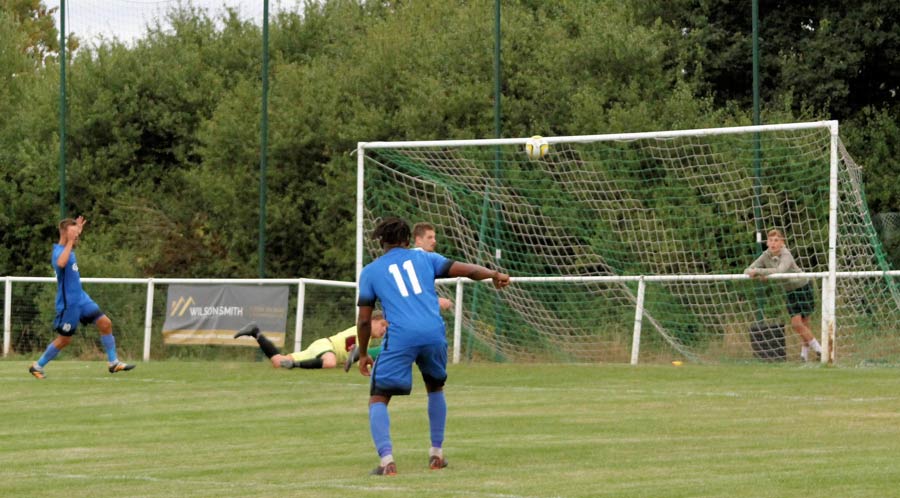 Jets now sniffed a chance, and they flew at the visitors. First, Karl Penny looked like he’d levelled with a superb back post header but a brilliant fingertip save denied the notch, then Ollie hit the bar, and you just sensed it was coming. Then Ollie hit the post, and as the fans held their heads in their hands, Luke Jones pounced coolly again for 2-2 (62 min). 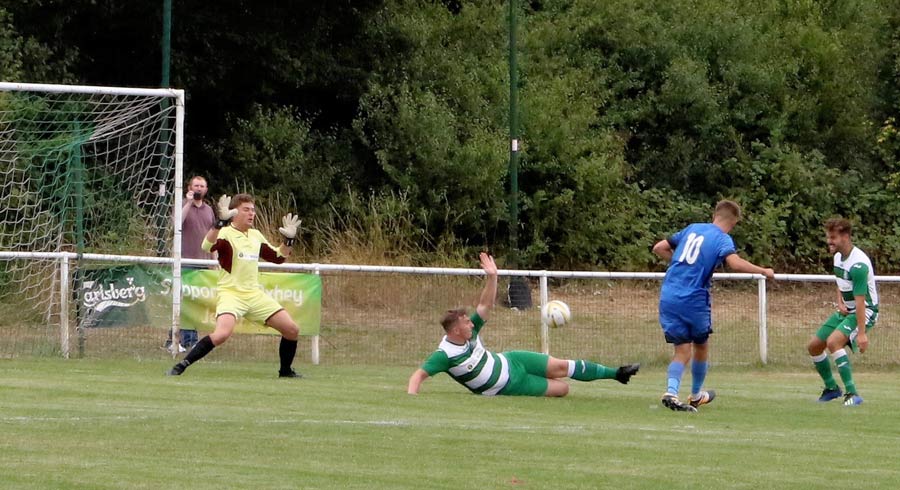 Hardly time to draw breath and a cutter through to Nick Kerley, who at last was getting the feed he deserves, and bang 3-2 Jets (65 mins). 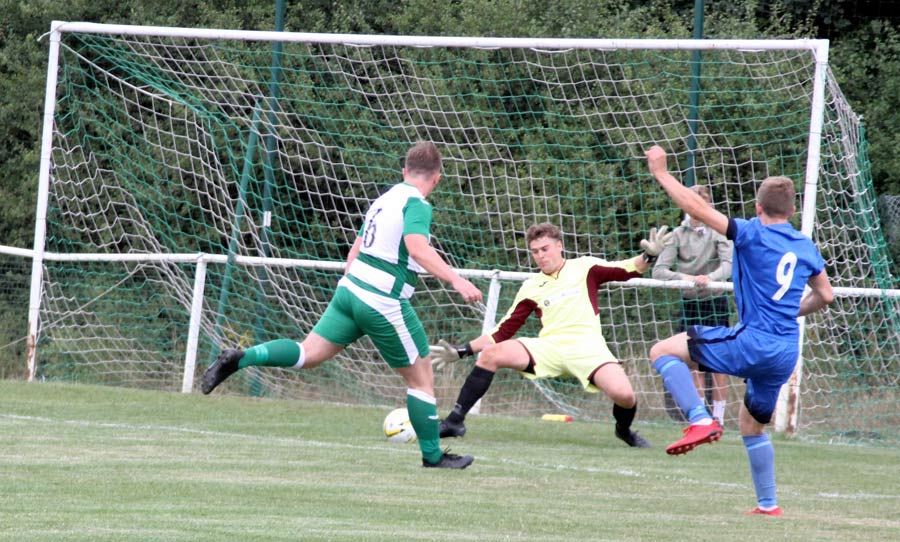 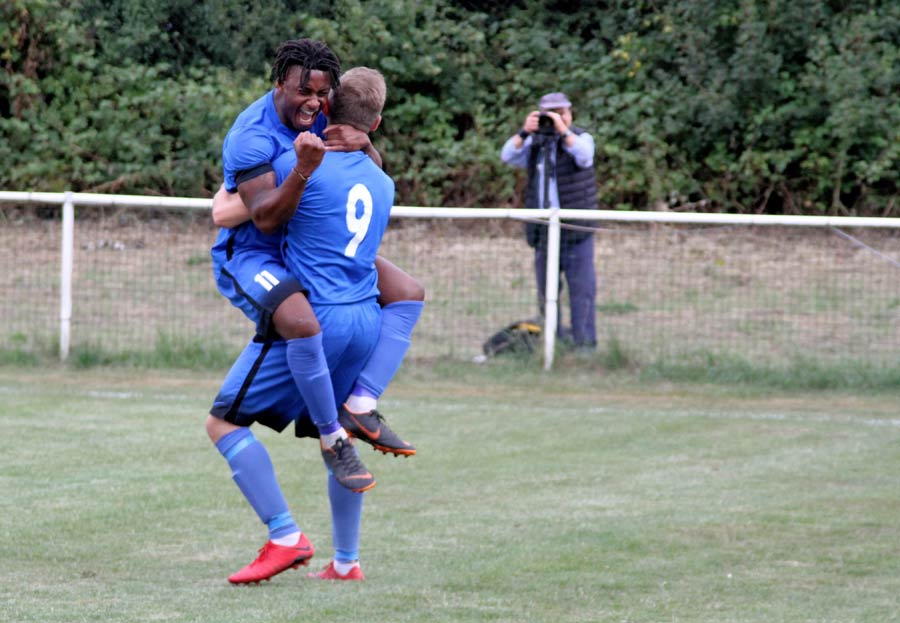 It was now a ding dong of a game. Wantage shaken but now stirred as they came back at Jets. Both sides made changes, and it was a real FA cup classic for the neutrals. Then on 70 minutes, it was all to go wrong between Jets and a match official who seemed to lose all consistency in the heat of the battle. 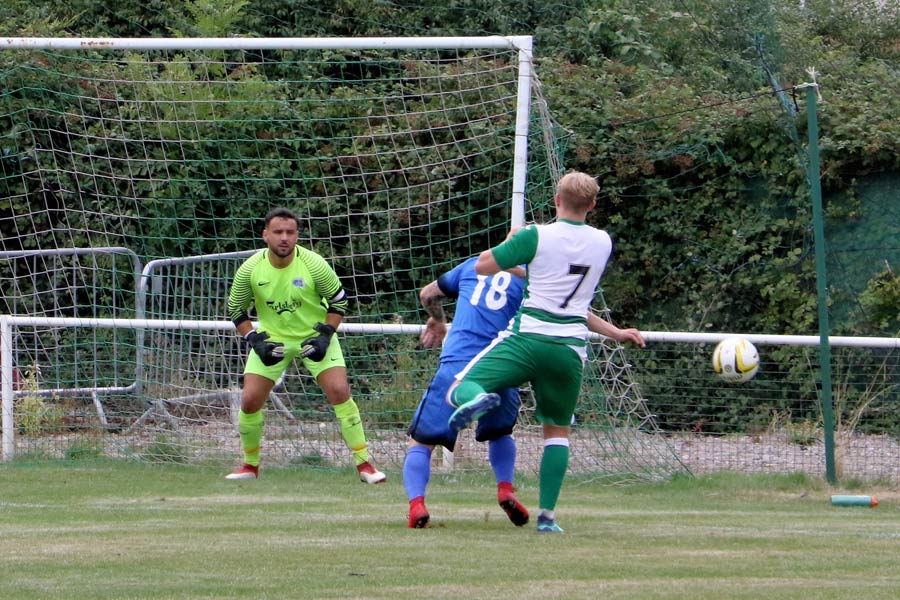 It all starts to go wrong for Jets.

Failing to punish simulation attempts both ways the calls went to he who shouts first and a major turning point, Sub Ryan O’Sullivan was outrageously flattened, but to everyone’s amazement, it was not given as a free kick but a corner. From the corner it seemed there were pulls and pushes everywhere as the referee lost all grip. The whistle went for a second penalty against Jets, who against nobody knows but it was converted again by Jackson (73 mins). (Looking at the video at 10:34, the attacker looks to run into the back of Andy Brennan and fall over!). 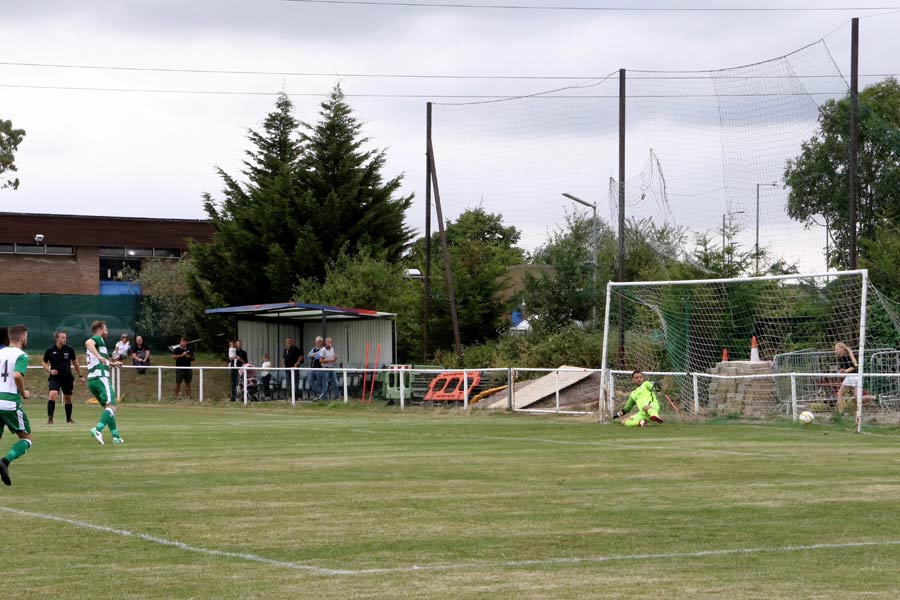 Wantage convert a ‘soft’ penalty to tie up again at 3-3.

Jets lost their heads with the official and a small flutter of cards followed. More followed when a throw-in was reversed just as it was about to be taken, and the weird went weirder when Scott Bonner was made to leave the pitch after getting relief for cramp from a fellow player, not any staff.

Four minutes into stoppage time that was strangely long for a match that had only one on pitch treatment. Bonner off with cramp and the worst thing any team wants is a centre-half swop in stoppage time at a corner.

Jets pay for switching off as Wantage score at the back post.

The ball cleared, and now the indicated five minutes before the long, long trip to Oxfordshire on Tuesday looked a done thing. Time ticked on, and sub-centre-half Wallace cleared one. Then a superb save by Jets keeper Evans held things all square. Then, from a corner, Jets lost all concentration, and Connor Mattimore headed home the winner (97min).

It was a bitter blow for Jets who were excellent second half. As disappointing as it was the positives must be drawn from the game by a new look squad that’s in the early stages of becoming a team. This was the best its looked for a couple of seasons, and BOTH teams deserved the standing ovation they received at the final whistle.

Of course, Jets were gutted, and it was a real shame, in the end, that the official had such a perceived influence on the final result, but we met and came nose to nose with an excellent side today and almost pulled off a superb comeback.

The Carlsberg Jets man of the match was easy and no shortlist, Luke Jones, for his influence and two good goals in a superb second half.

One thing I did ask is why the nickname the “Fred’s”. Wantage is where King Alfred burned his cakes! I hope we meet Wantage again maybe preseason and the cakes are on them, cos with a little help by the rub of decisions today they got the cherry on the top. 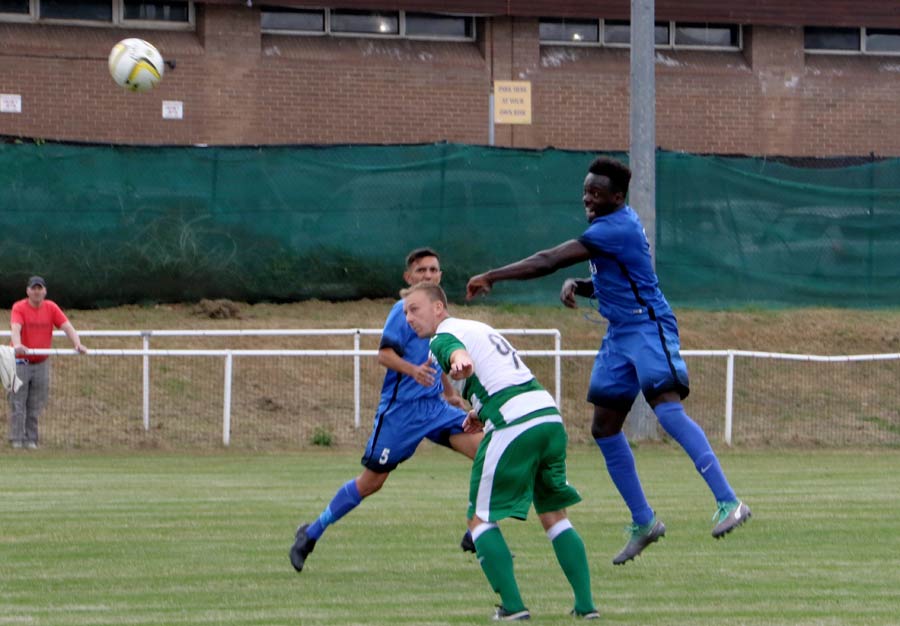 Ash on song for Jets. 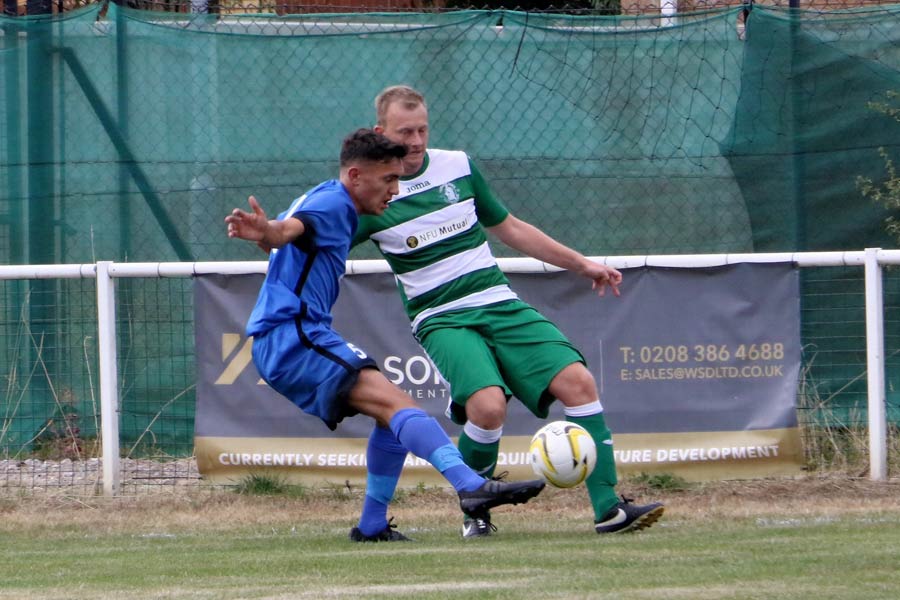 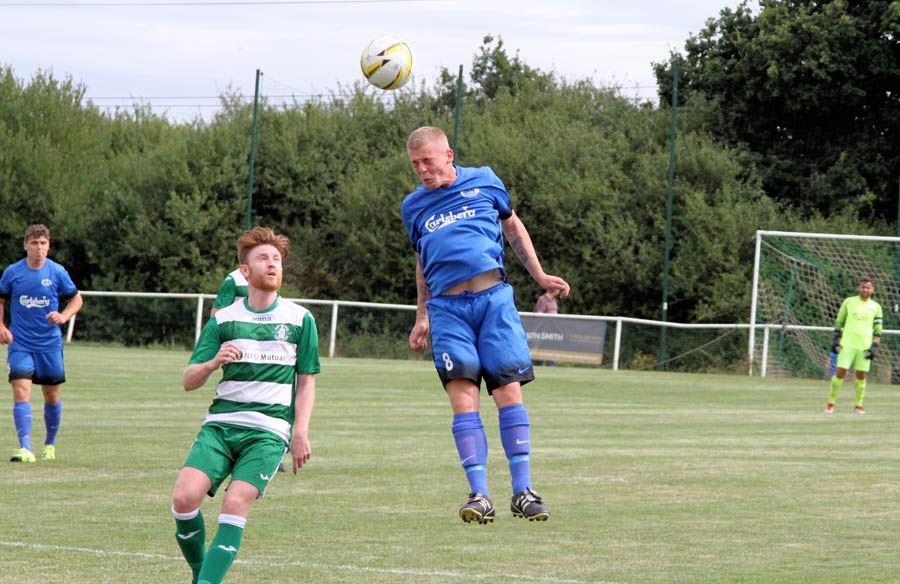 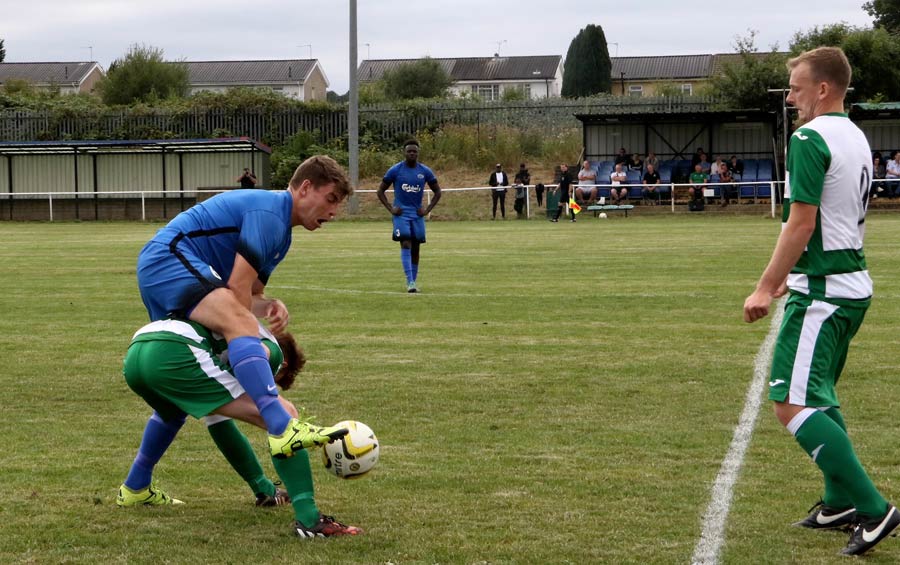 Jets have a penalty shout as Degi is flattened. 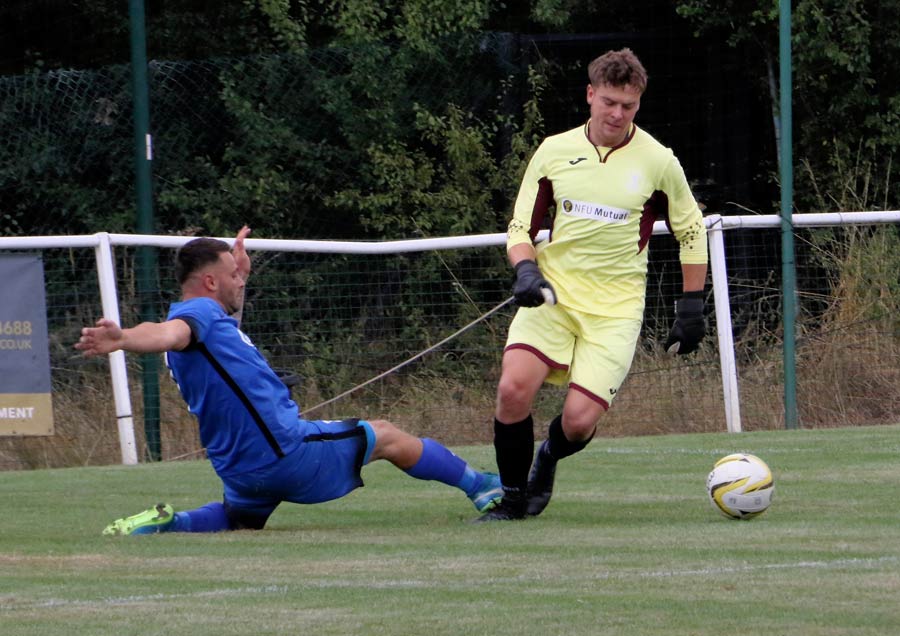 Karl Penny almost catches the keeper out at 1-2. 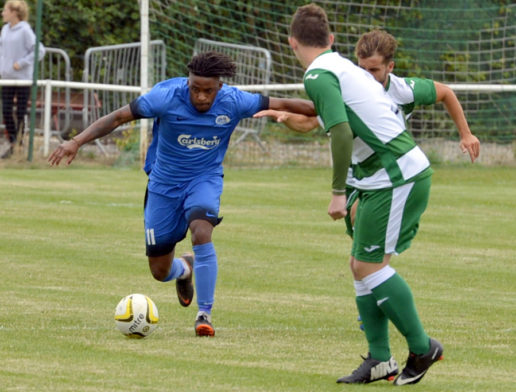 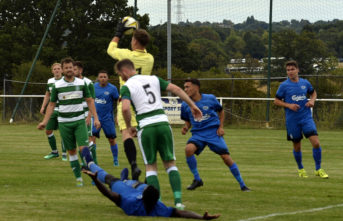 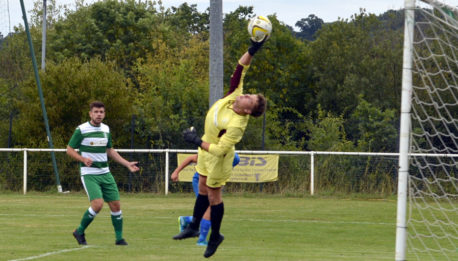 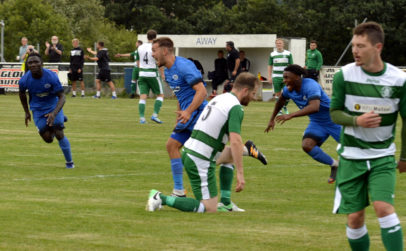 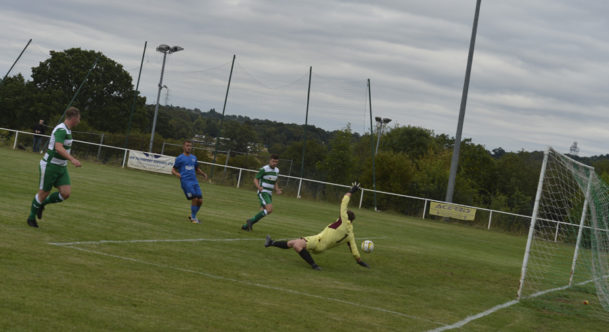 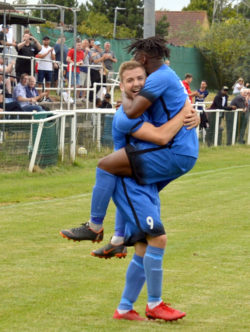 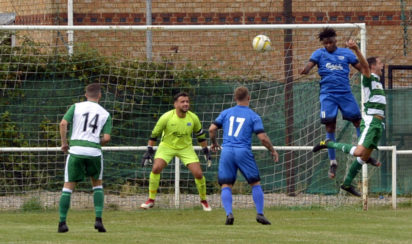 The penalty (5) the second one for Wantage 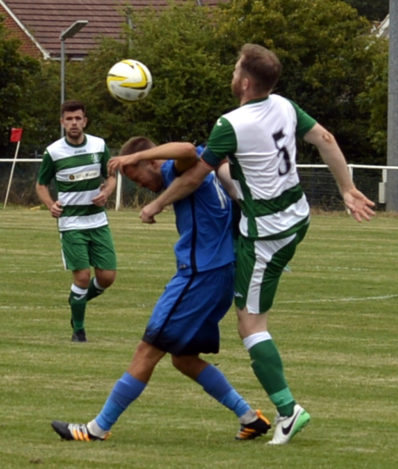 No foul given for Jets 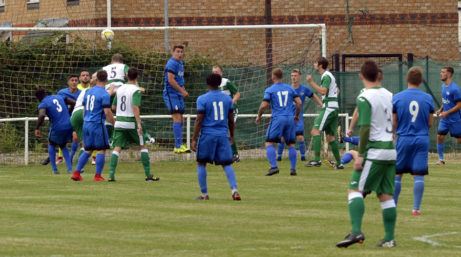