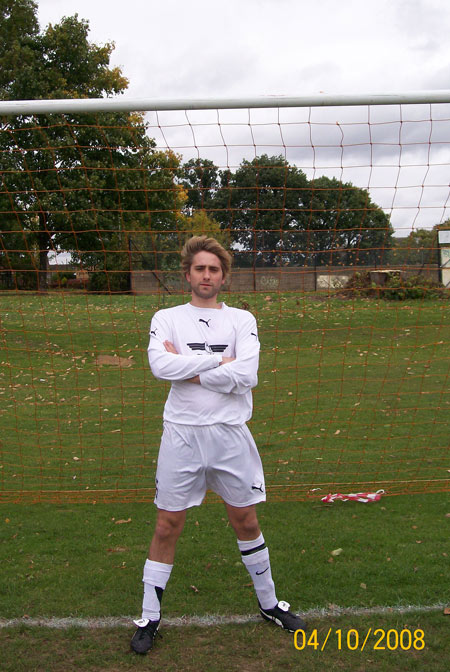 The first time I took a right at the Northwood NATO base and headed towards the Boundary Stadium, the home of Oxhey Jets, I did so with a slight feeling of trepidation.

There were three reasons for this.

The first was that the last time I had been there was aged seven when I’d been having swimming lessons in the adjoining James Altham swimming pool. The instructor had given me some instructions which I’d ignored and then launched me head first into the middle of the pool. Unable to swim, I plummeted to the bottom, quicker than a David Moyes team dropping down the league. The instructor eventually intervened, leaving it just long enough so that my lungs were full of water but not long enough that I stopped breathing. He took credit for my survival, even though it was undoubtedly his fault I was drowning in the first place. Like a defender who scores the last-minute equaliser having earlier scored an own goal, he got the praise, but he didn’t really deserve it, and I always remembered that.

The second was because I was going to join a football team with a rapidly growing reputation in the local area. This was still before the days of FA Cup entries, but the club was still well regarded. And I knew that I was an average football player. Probably worse than that actually; decent at five aside, but on the bigger pitch, I was lacking in strength, power, touch, temperament, finishing, actually come to think of it, any of the attributes that make a quality player on FIFA computer games. I knew I wasn’t getting near the main teams, but the club had many teams, and I felt confident I could make the grade for one of them. It was the years of three-five-two, and I had been perfecting my craft as a specialist substitute; utility player would be too kind. Need someone to come on for the last few minutes and chase down balls, fail to hold them up and fire shots in the direction of the corner flag? Need someone to see out the last few minutes and run around like a headless chicken, deliberately and accidentally mistiming tackles? Need someone to run up and down the wing as a decoy, calling for the ball but not really wanting it? I knew I had a multi-faceted talent that no one else could replicate.

The final reason was that it was ‘Oxhey’ Jets. Oxhey. I didn’t know anyone, but I’d heard stories. Be careful around there, it’s one of the biggest council estates in Europe, they said. Tread carefully someone advised, there are no secondary schools there because the children burnt them all down. There’s a dragon that lives on the precinct near the Woolworths that’ll burn you alive and then steal your pick and mix, someone warned. Still, I got in my fifteen-year-old Nissan Micra, and after a short drive, I pulled up at the Boundary Stadium.

I was greeted by a man who looked like the love-child of Victor Meldrew from One Foot in the Grave, and Gargamel from the Smurfs. Apparently, he’d set the club up when he was eight years old, dropping out of primary school to have the time to run it all. It was said that the first-ever men’s team had been made up of all the players he had started within the under threes and made their way up the age groups. But he was kind enough, and I ventured inside the clubhouse. There were plenty of trophies, which was another indication of how I was nowhere near the standard required, and a few people dotted about in conversation. Stood at the bar was a bloke with some kind of reverse Tourette’s – he only spoke in swear words, with the odd non-profanity thrown in.

Those initial few weeks continued to be a bit of a culture shock. During a training activity that involved running once around a square of cones, there was an in-depth discussion about whether or not which part of the square you started the run from affected how far you had to run. Clearly, this was a joke. As the conversation entered into its second minute, I realised it wasn’t. There was the controversial pre-season chant when an opposing player went down injured. And there was the man who looked like a garden gnome who ran the line each week cigarette in one hand, flag in the other, and shirt on the floor, even though winter was rapidly approaching.

Pretty quickly though all this trepidation faded as I realised what a special club it actually was. I didn’t stay because I was any good at football. I wouldn’t have been allowed to stay if it was just about the football. It was because of the people. Kind, generous, thoughtful, and supportive. People that cared about one another and that cared about their community. The elders that had helped form and support the club all those years earlier were still part of the furniture and respected as such. Those now too old to lace up their boots watched from the sidelines shouting encouragement. Well, their own particular brand of support at least. Fathers who had played brought their sons along as the next generation of Jets stars was cultivated. People looked out for one another, gave each other advice and opportunities, and if someone was in trouble, they knew that they had a clubhouse full of people they could turn to. If there was a celebration, the Jets was the venue, whatever the party. The pool table would be set into a buffet table, the flashing lights would go up, and the DJ would play his songs in a slightly different order to the week before. But people would be there. When tragedy struck, a real tragedy not a loss on the pitch, and there were significant ones, family conflicts, people who passed away, and severe ill health, the whole club rallied together. And people didn’t do this because it was their job, because they got paid, or because it was their duty. They did it out of a feeling of humanity for one another.

Perhaps no example better epitomises this than the weekend match for Tom Lake. I didn’t know him, and I don’t think I met him. But Jets memorial game in memory of Tom is not some romantic sentiment. It is a gesture that comes straight from the heart that represents everything the club is about. It is the people that make Oxhey Jets the great community club that it is. They play at Boundary Stadium, but when it comes to their people, it is a club without boundaries.

Adam shows off his shooting skills to his unimpressed looking team mates!