With our older players now out of the youth levels, Jets ran a senior team for the first time in 1978-79 playing in the Watford and District League Division 2. Consisting of at least five teenagers who had been with the Jets set up since the formation in 1972 and up through the youth leagues, Jets shocked all in the Watford & District League on their debut season by gaining promotion at their first attempt from Division Two – finishing third in the table- and reaching the final of the Junior Benevolent Cup, losing to local rivals South Oxhey Sports. 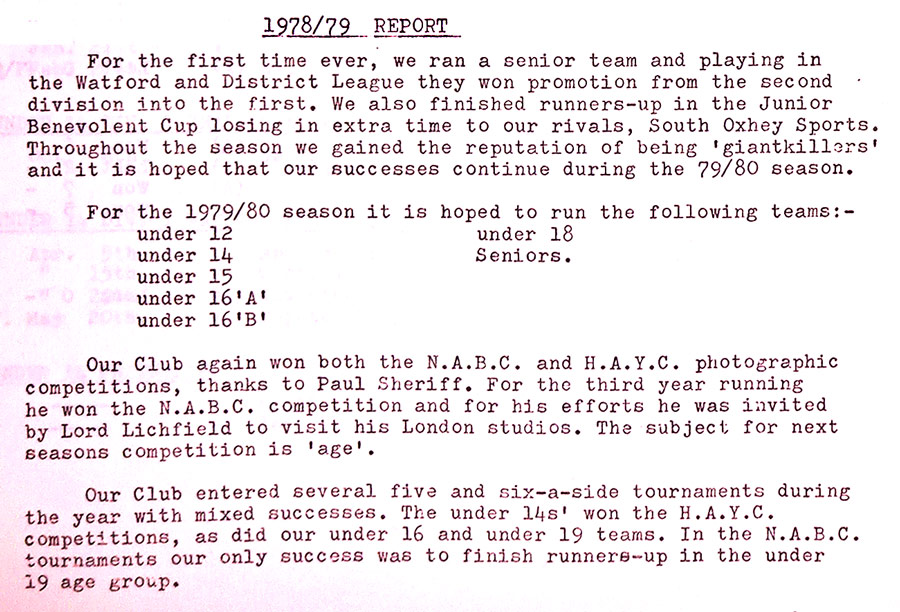 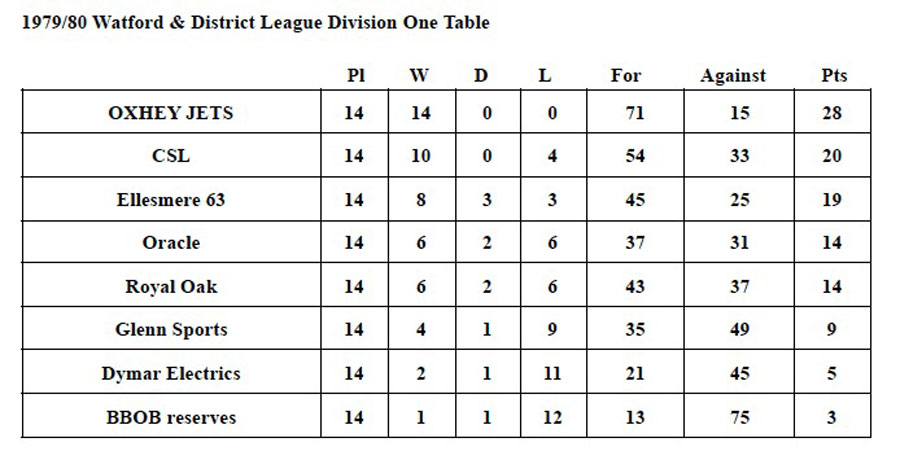 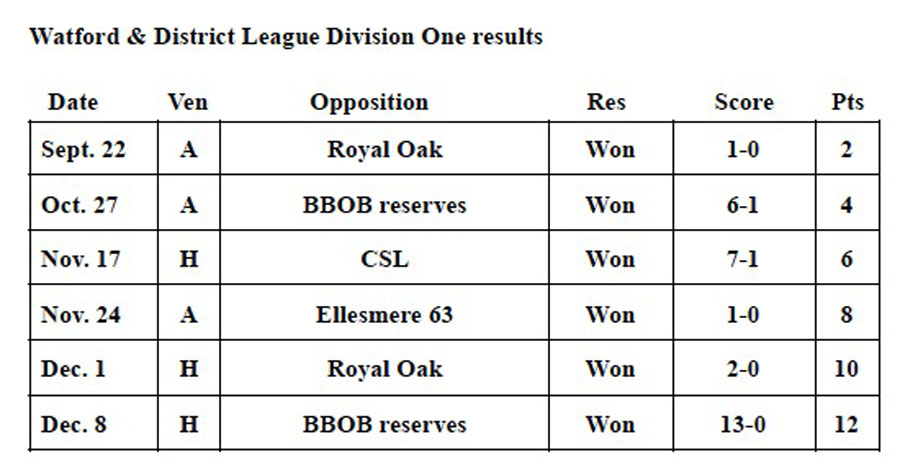 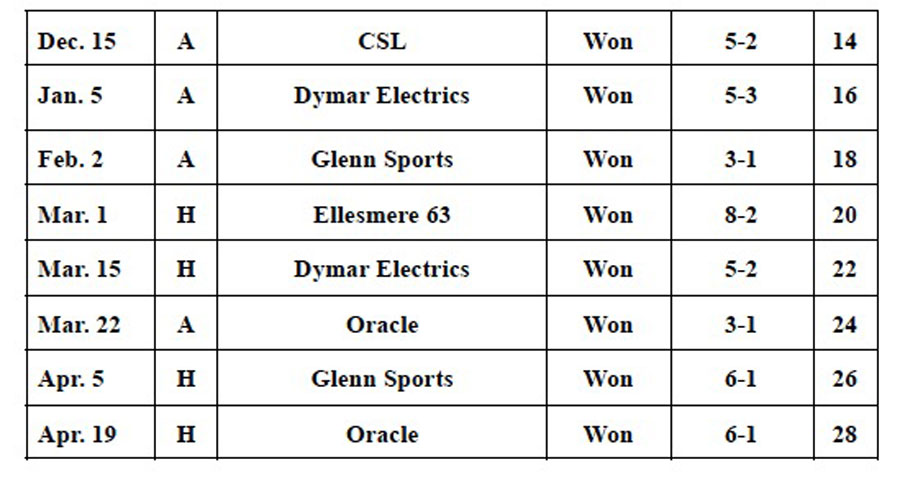 Who, though, would have thought that the young Jets would continue to improve in an even tougher division in the 1979-80 season?

As the new season, which started in September, finally came around and after two successful friendly matches that Jets won (9-0 verses Rangers and 3-1 against the Red Lion), Jets faced their first competitive fixture of the new season with a match in the Herts FA Junior Cup, a home tie against their rivals SOS (South Oxhey Sports) which saw Jets gain revenge for the Cup Final defeat the season before, with a closely contested 2-1 win. New arrival for Jets, George Hodges, getting the winner.

September 22nd saw a bit of Jets history be made as Jets travelled to play Royal Oak in their first Watford & District League Division One match, Jets came away with a 1-0 win.

October saw Jets defeat Duke of York in the second round of the Junior Cup but get knocked out of the Watford & District Challenge Cup, losing to Leggatts Old Boys reserves 5-2 at home but beating BBOB reserves away 6-1 in their only league match of the month in a game that saw Jets play below par and going a goal down until Tim Linehan came on as a sub and George Hodges scored four of the six.

November found the Jets back in fine form as they defeated Doolan Roofing 1-0 in the Junior Cup to reach the first round proper, a solitary penalty deciding the tie, converted by George Hodges. Jets also saw off Glenn Sports in the Benevolent Cup winning 5-2 away from home and keeping their league form intact by thrashing CSL 7-1 at home, despite initially going a goal down first before Jets hit back, and beating Ellesmere 63 1-0 away, that man again Hodges scoring the winner after missing a penalty earlier in the match.

December saw the busiest month of the season so far, a 2-0 home win against fellow title contenders Royal Oak on the first day of the month thanks to goals by Terry Greenland and Tim Linehan was followed a week later by the biggest win of the season, a whopping 13-0 victory over BBOB reserves, and the double was completed over CSL with a 5-2 away win. A break for Christmas followed but the last match of the seventies saw Jets win 4-0 at Chipperfield reserves in the Junior Cup.

A new year and a new decade saw Jets celebrate the fact with a 5-3 win away to Dymar Electrics in the league. In the Herts Junior Cup Jets found themselves facing a tough battle against North Herts League side Walkern, who were currently unbeaten in thirty three matches and with seven of their team selected for the North Herts Representative side, but Jets showed their resilience and came away from East Hertfordshire with a place in the next round after a fantastic 4-2 win over a side that would come to compete in the Herts County League in couple of seasons. This was known as the biggest result in the club’s history so far. And the cup wins would continue as Jets saw Albion Rovers out of the Benevolent Cup with a comfortable 4-0 away victory to finish the month.

Despite February being a mild month weather-wise, Jets only had two competitive matches for the whole month, first was the 3-1 win away to Glenn Sports to keep up their 100% league record, the other match was the away quarter final tie in the Junior Cup against Herts County League Division Three side, Potters Bar Crusaders reserves. Despite bringing over 100 Jets fans, Crusaders were clear favourites, but Jets prevailed to win with two first half goals from Chris Fowler, Dean Cleary with a penalty in the second half and George Hodges making sure near the end of the game.

March saw another busy month of football ahead, starting off with a emphatic 8-2 victory over Ellesmere 63 in the league but coming back down to earth with a bump after losing in the semi final of the Herts Junior Cup to Bengeo Trinity 3-2, spoiling the dreams of a final at Clarence Park. A week later and Jets were back in league action, and the blip that Jets suffered the week before were forgotten as Jets ran out 5-2 winners against Dymar Electrics. Jets continued their winning streak with a 3-1 win away at Oracle and finished the month off with their second semi final of the season, but once again losing to their nemesis Leggatts Old Boys reserves 3-1, the same team that knocked Jets out of the Watford & District Challenge Cup back in October.

April arrived and the title was already Oxhey bound, but there was only one thing left to wonder, could they finish the season in the league as undefeated champions and become one of the rare “Invincible” teams?

April 5th saw Glenn Sports come to Oxhey and went away with their tails firmly between their legs after a 6-1 whipping, but it was another fortnight before Jets would play the final league match of the season against Oracle, who had already secured fourth place in the league, and were looking at spoiling the party.

However, Oracle were to be no match for Oxhey Jets, who became Watford & District Division One Champions and were officially given the tag of “Invincibles” after beating Oracle six goals to one to make even more history for the South Oxhey club.

Now with several youth teams in place from U-12 to U-19, and a Senior team that had already well established itself in its first two seasons, Jets were going from strength to strength.

Jets had been promoted into the John Dickinson West Herts Saturday League, and although no match for Aldbury Sports, Jets were still strong and finished 2nd, enough for them to gain promotion  to the Herts County League (HCL) Division 1.

So 3 years as a Senior team and Jets had worked their way quickly through the Watford and District Leagues and the West Herts Saturday League and been promoted to the HCL Div 1. George Hodges was Jets top scorer in the final season, and he went on to be a prolific scorer for Jets in the next decade in the HCL.