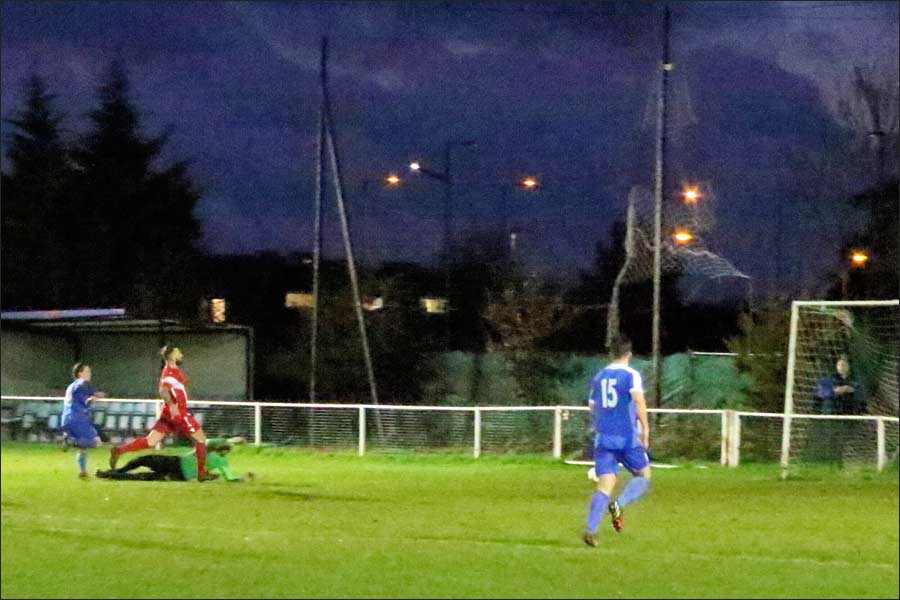 Jets earned a great point against the long unbeaten Cockfosters side that are hunting down the championship chasers.

Cockfosters were unbeaten in their last ten including wins against Hayes & Yeading and league leaders London Colney and were hot favourites to beat the wobbling Jets side. 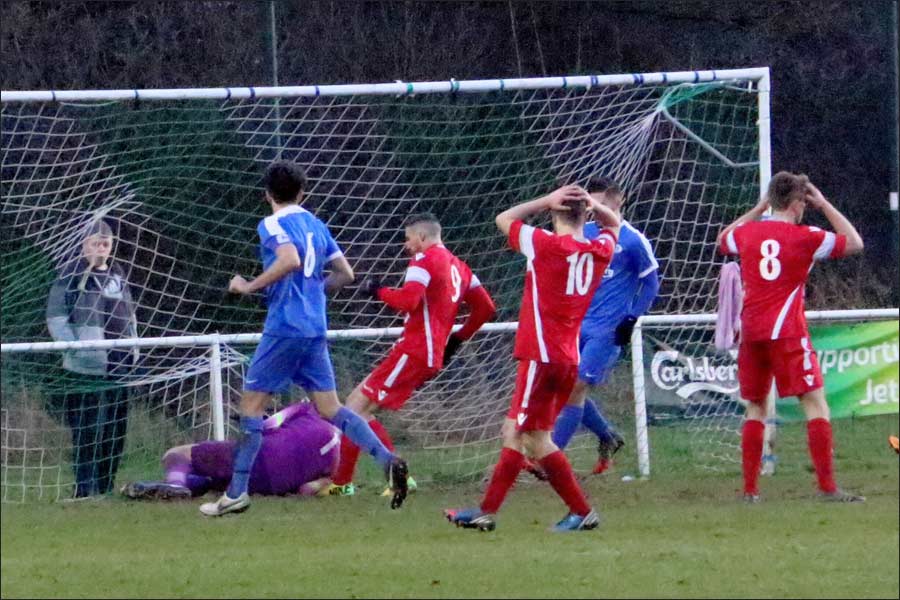 Will Baker frustrated Cockfosters with some great saves

It was, however, Jets, boosted  by the return of former Keeper Will Baker, who started more buoyant. Two big chances were missed by Jets in the first two minutes. Luke Jones tried to pass the ball into the net rather than pull back for the tap in, then Luke wells went clear and blasted high. 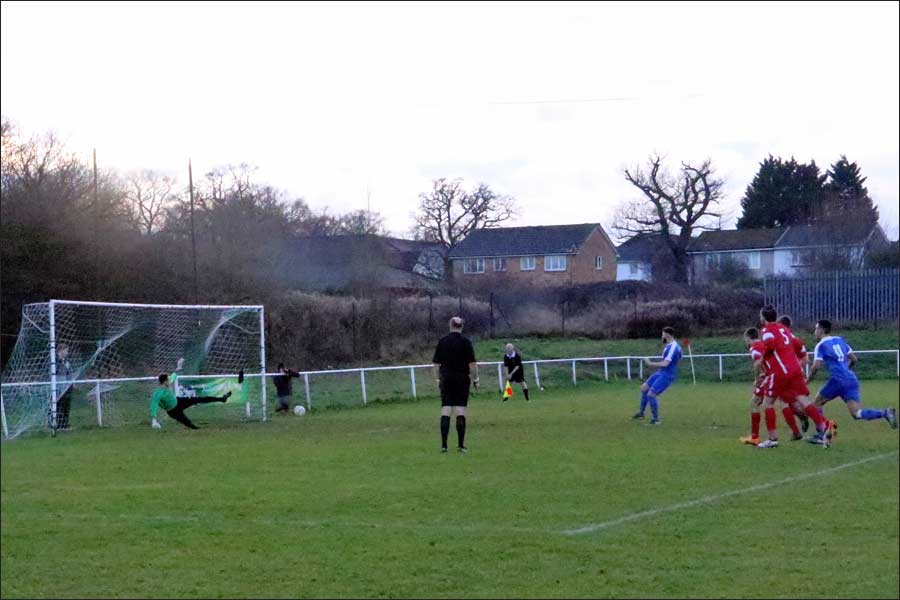 Minutes later Wells again went clear from a superb ball from Gary Warn, and was taken down and the penalty converted confidently by Sim Armstrong 1-0 (21 mins). 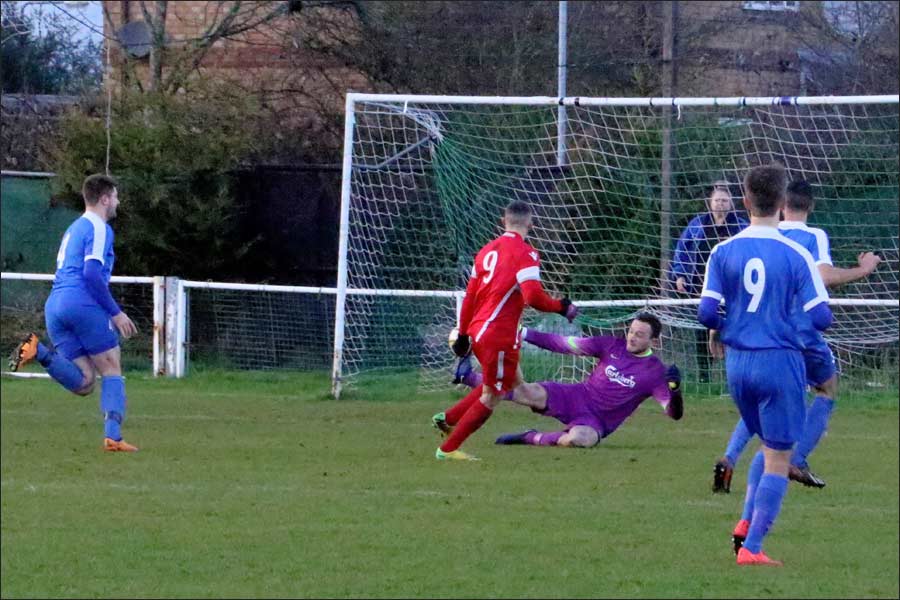 Jets and Cockfosters, in fairness to both sides, were producing an end to end ding dong and Cockfosters levelled at 1-1 on the half hour, Loannis netting. 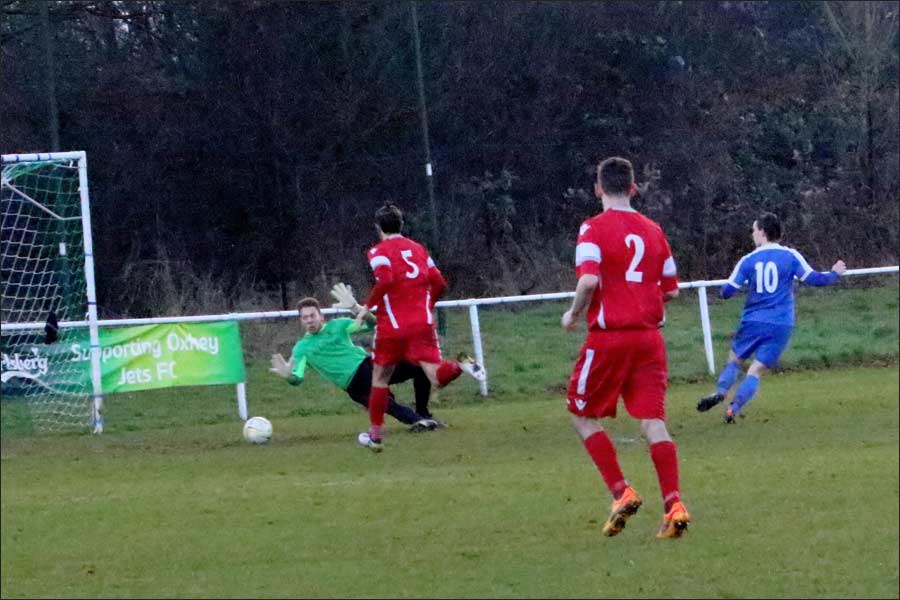 It was not to be the only time today that the reply was immediate and it was to be the Fosters nemesis Luke Wells who latched onto young Jake Kissiedu’s through ball to calmly slot 2-1 (32 mins). 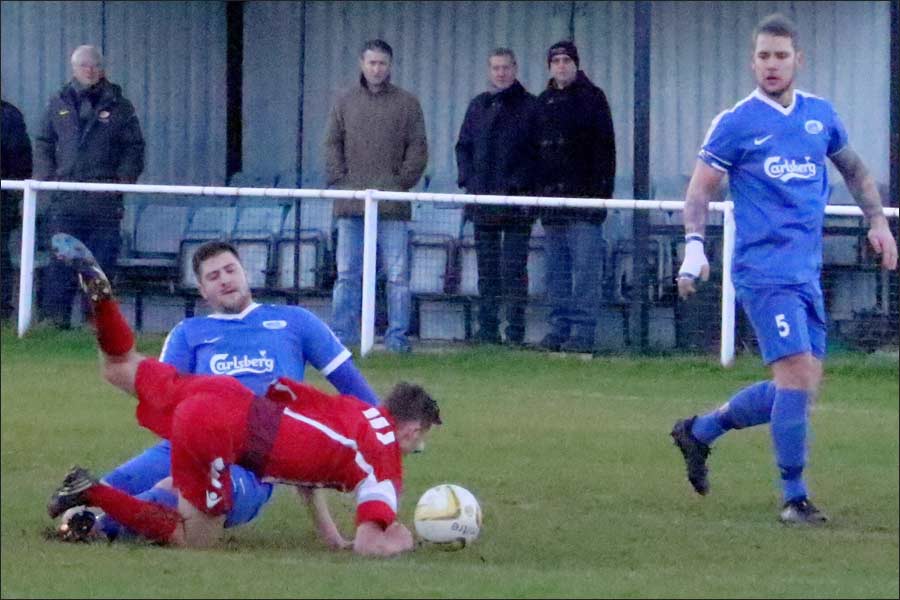 Fosters get a free-kick just outside the box 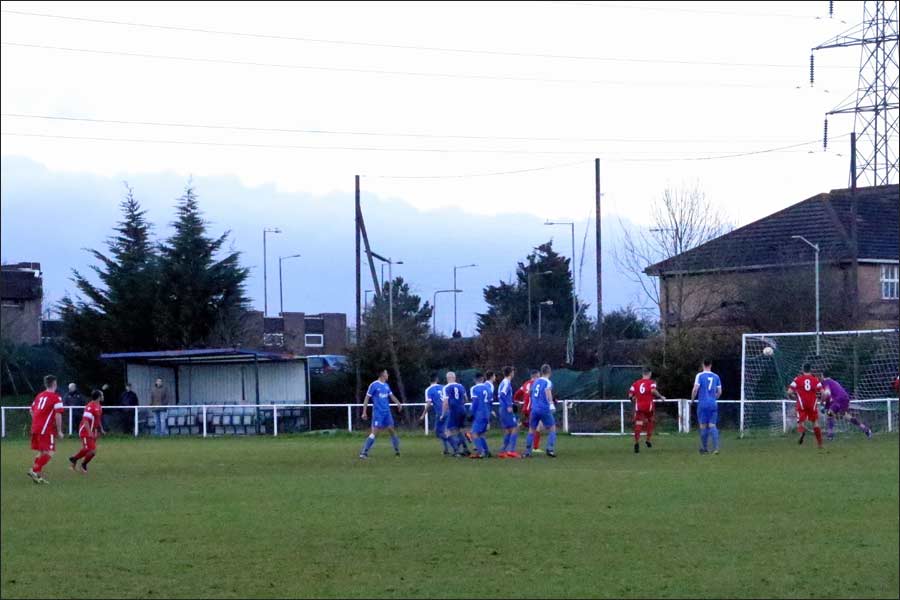 The visitors again pulled level when a blinding free kick was converted by Ben Hart from the edge of the box  after a clumsy tackle by Luke James was fully punished, 2-2 (43 mins).

The second period was more in favour of Cockfosters as Jets seemed to tire and got forced back, relying more on the counters, but some right dodgy offside flags did seem to deny Wells of goals, but to be fair the visitors were equally complaining about the lack of the flag too… I guess that’s the life of a Lino!

In a highly competitive game a couple of yellows followed because some of the decisions brought comments, always a shame that officials mistakes lead to players cautions to defend it.

Back to football and an edge of laziness in midfield looked to have cost Jets when, in the 91st minute, Loannis finished a superb passing movement 2-3 and Jets looked done…. but no, they weren’t! Sim Armstrong won a loose ball and played in Luke Wells who beat the offside trap and calmly slotted (92 mins) 3-3 and an excellent point for Jets. 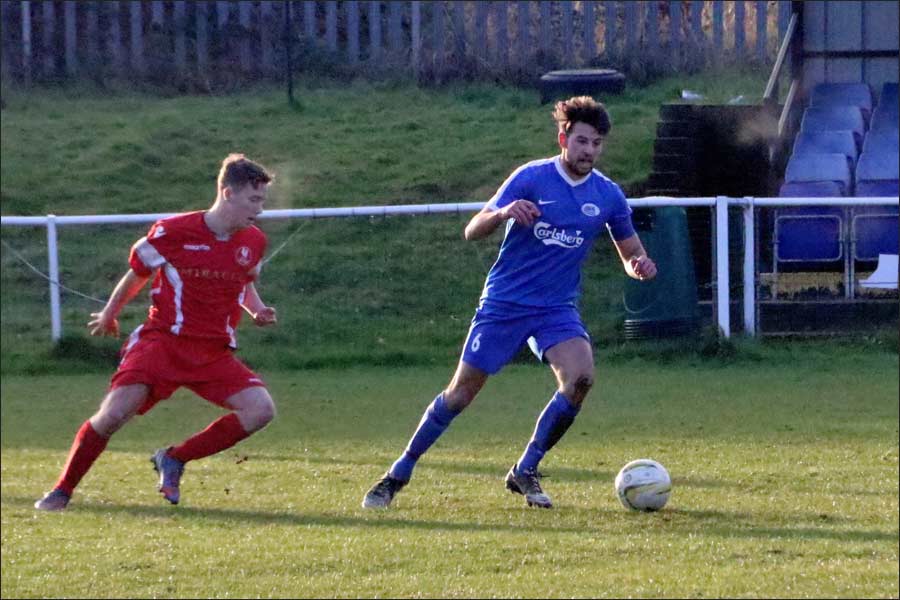 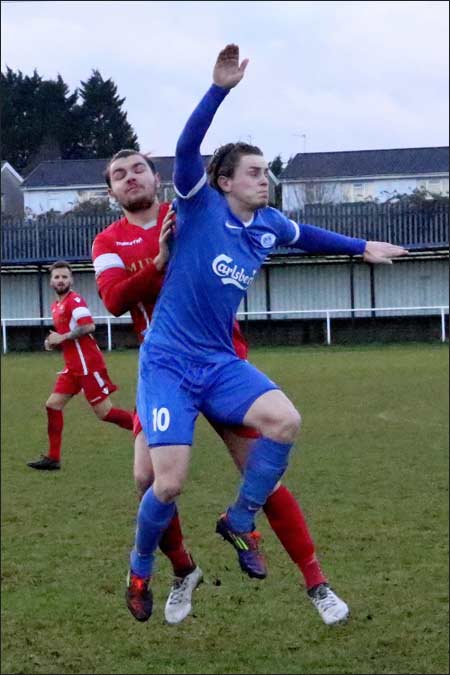 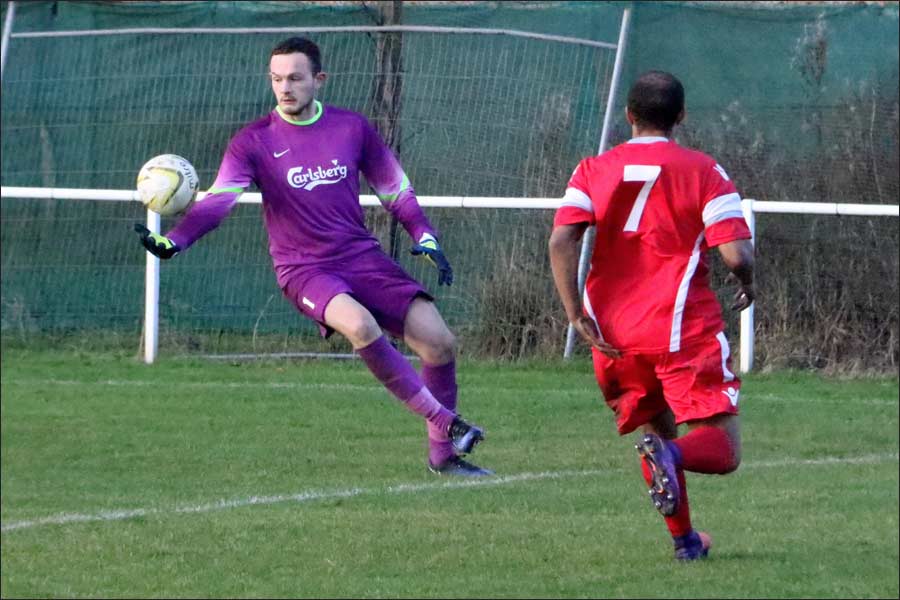 Will Baker got the MOM on his return

Jets man of the match was highly contested. Jude Bell had an outstanding game, Sim Armstrong was competitive but the finalists were Luke Wells, who was Cockfosters nemesis, and the superb debut of Will Baker.

The decision was made by Lee Stedman who went with debutant keeper Will Baker who made several outstanding saves to keep and earn Jets a well deserved point. 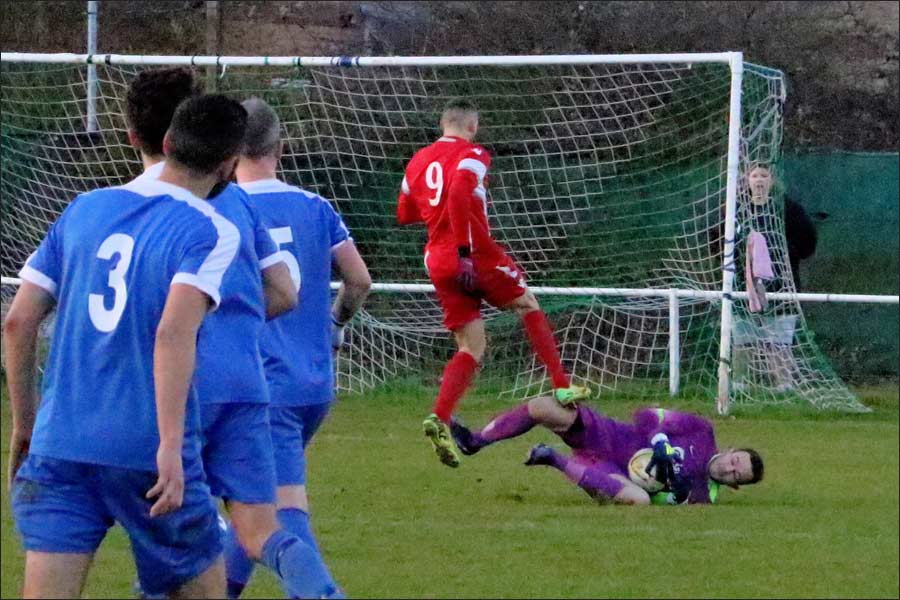 Another good save from Will Baker