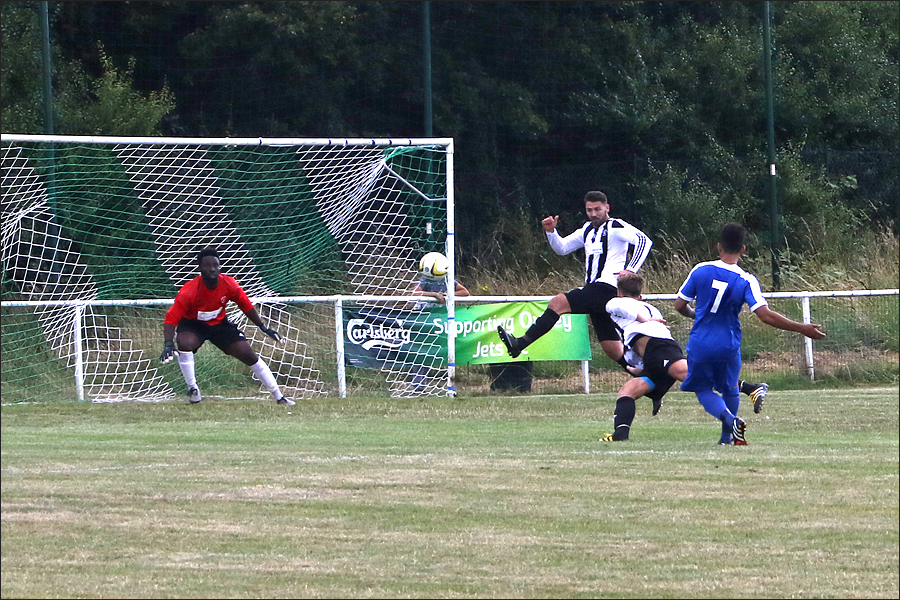 Jets fought hard and long to get their first league points of the new season against our local friends from Colney Heath.

It was a ding dong battle in the extreme humid heat at the Boundary stadium where two of last years strugglers look to enjoy better fortunes this season.

Jets, under caretaker manager Warren Gladdy {while Lee lounges on a beach} had to batten down the hatches after a harsh red was shown to Jets social media adviser Brad Thompson for blocking a free-kick, frankly an awful decision in my opinion as there was no time to retreat BUT, in fairness to the official, the Jets lad admitted to lifting his leg slightly on instinct. The problem here is a ban, a fine AND the duff heads from the fair play league and FA pile on additional points and fines against the club as it falls into the dumb part of the ‘respect’ offences. 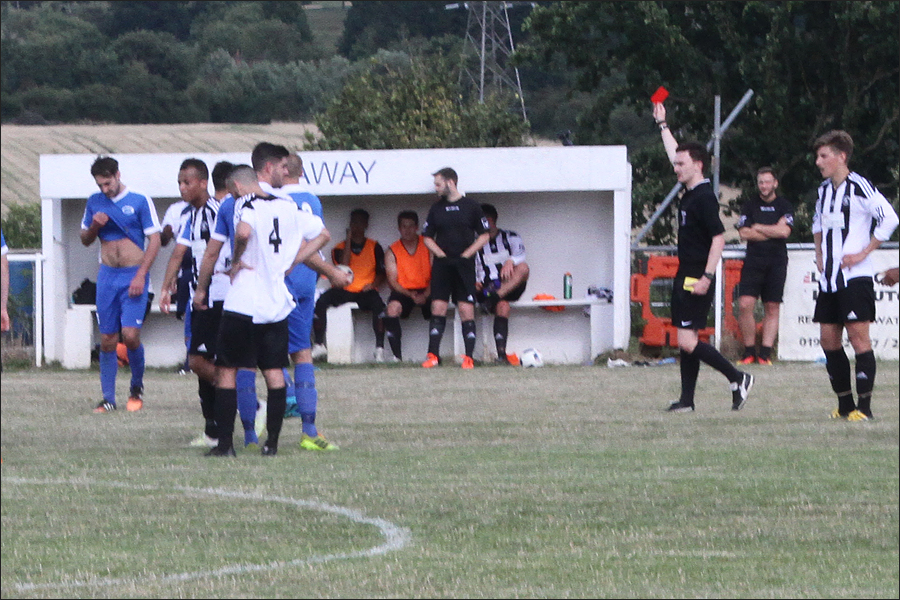 Brad Thompson get red on the hour

Jets were on the back foot a little at the start with missing personnel making the side look like it needed settling as so many are new players, but they were proving dangerous on the counter.

A dangerous free-kick was to turn advantage into disaster for Jets as Josh Noyes poor kick was immediately whammed up field and Heath’s Trey Charles bundled it in from close range to snatch the lead 0-1 (7 mins).

Jets took more control for a while and missed a hatful as Lowton, Wells and skipper Bell will wonder how they missed the target completely with the goal beckoning. The boy on fire, Adam Lowton, then pounced to score a much harder chance turning it in from the tightest of tight angles to level it at 1-1 (30 mins). 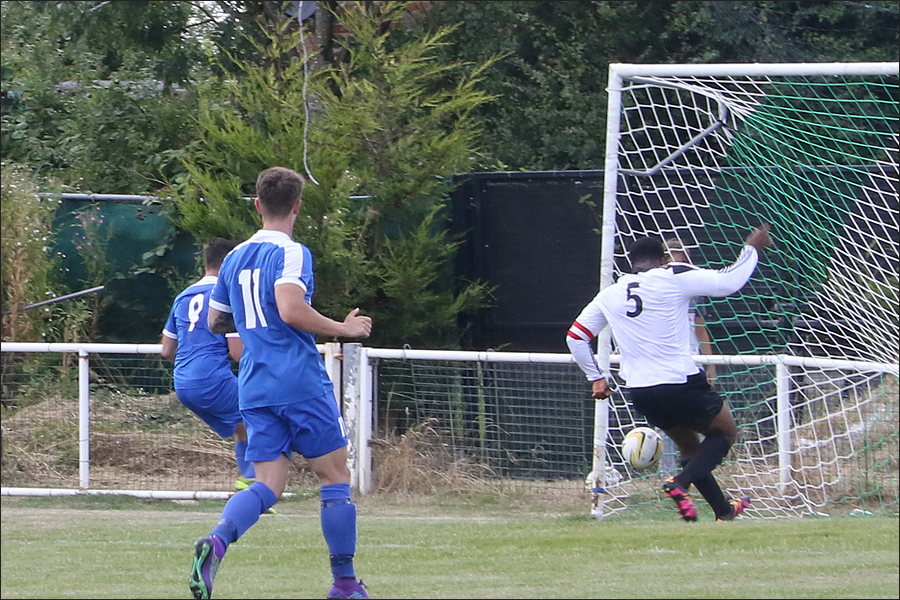 Rob Partington made two super saves to hold Jets all square and then, with half-time looming, Adam Lowton fired home from inside the area to give Jets the lead at the break.

Jets looked as if they had stayed in the changing rooms at HT and Heath took very much the upper hand and it really was no surprise when they tied up the game 10 minutes into the second half. Jets will think again that it stemmed from some sloppy play as Tomi Essien lashed at a clearance. Heath, though, took full advantage with a smart sweeping move that was then smashed superbly high into the net by Carbon. 2-2

Jets were on the rack but bang, they responded instantly as Luke Wells burned off his marker and squared to Lowton who checked and the ball ran through to the totally unmarked Josh Noyes who struck superbly, high into the net from the edge of the box, belittling his puny leg muscles size to blast home and erase his nomination as the visitors MOM after his first goal assist for them. 3-2 (57 mins).

Almost immediately though Jets suffered the setback of the rather controversial sending off. Down to ten, Jets were to put up the blue ‘force field’ and just said, ok 33 minutes to go, ten men, come and get us. Heath played their part in there own downfall by failing to convert chances at times and denied by dogged defending at others as Ben Collins and the lads dug in deep and then deeper.

Lewis Davis, who left Jets before a competitive ball was kicked, failed to earn his corn missing a sitter for the visitors when through clear and Jets survived for three superb points.

The man of the match was hotly contested with Rob Partington outstanding in goal, Adam Lowton with two more goals and ,working his socks off, but the nod went to Ben Collins as Warren praised his unselfish work and awesome input to the match. 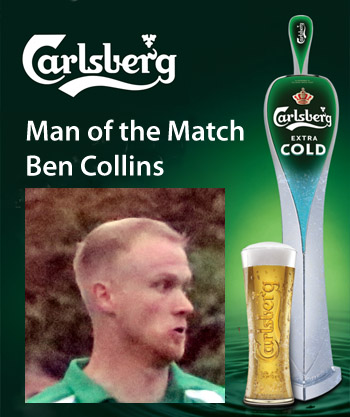 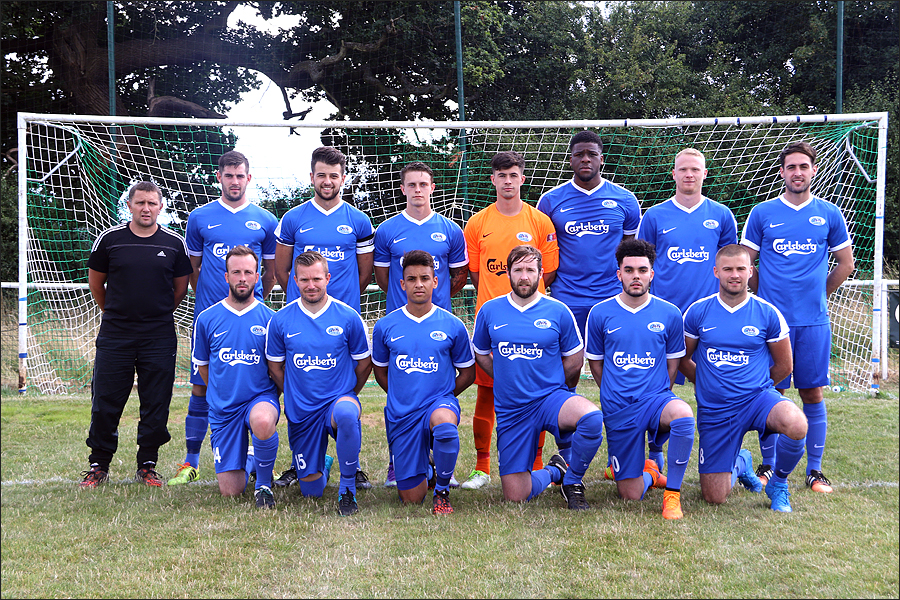 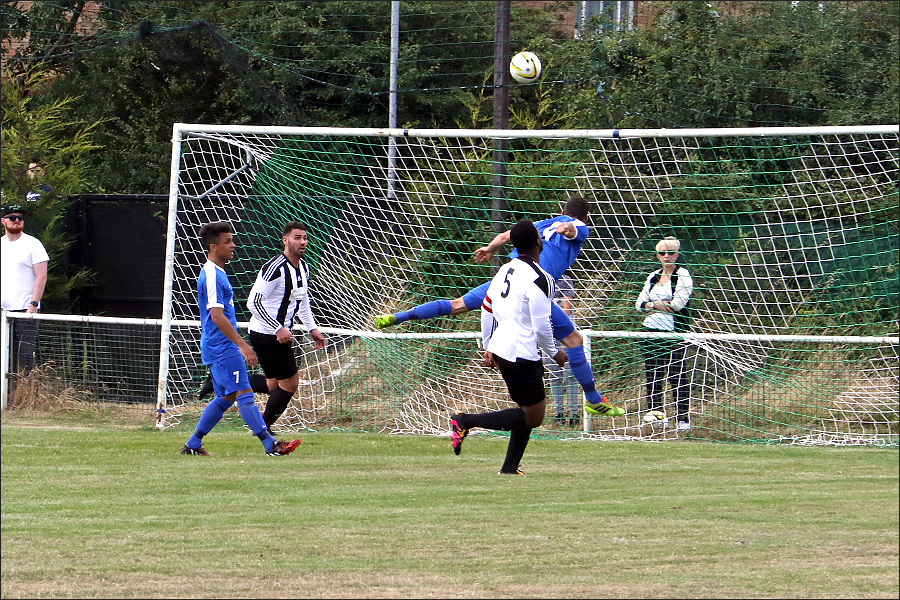 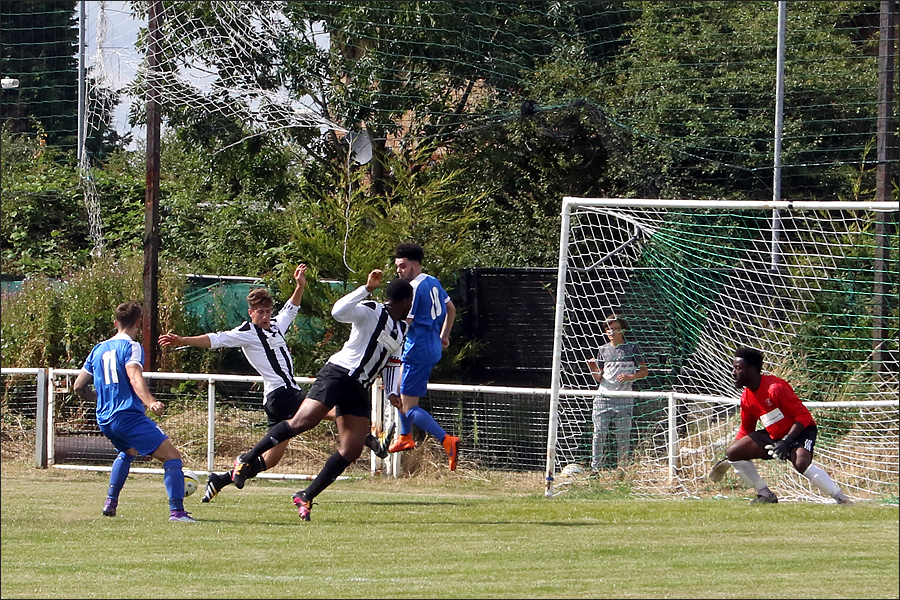 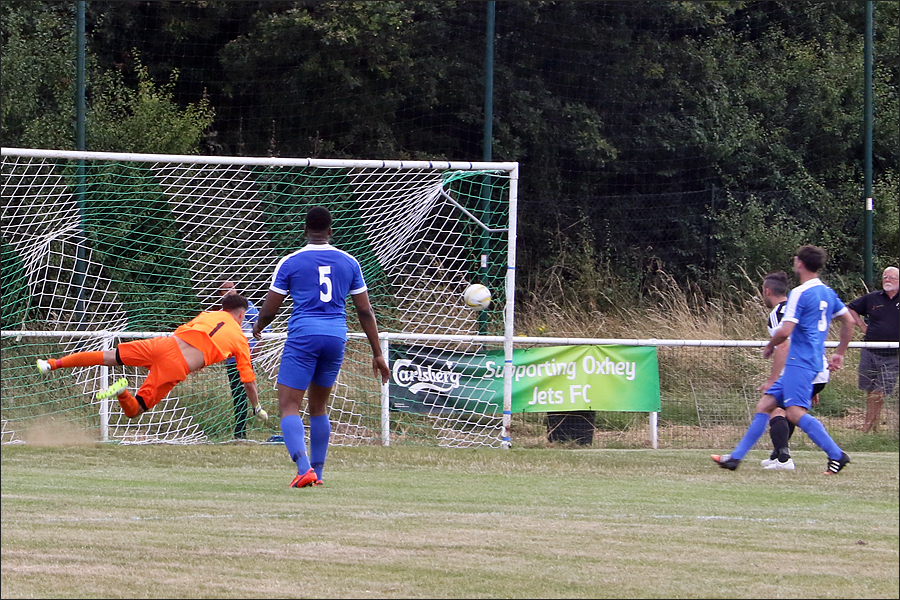 Flying save from Rob Partington 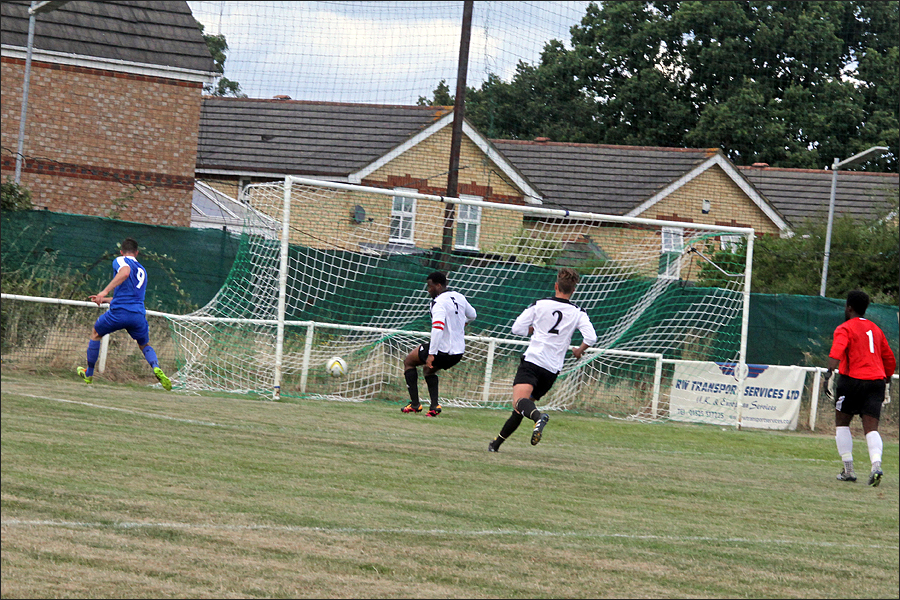 Lowts levels it for Jets at 1-1 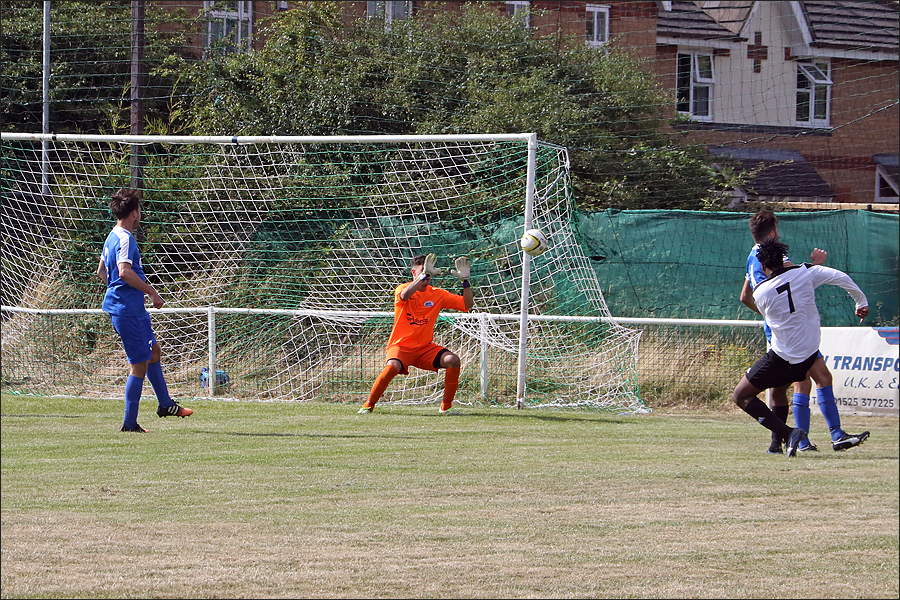 Carbon slams home an equaliser for Colney on 55 mins 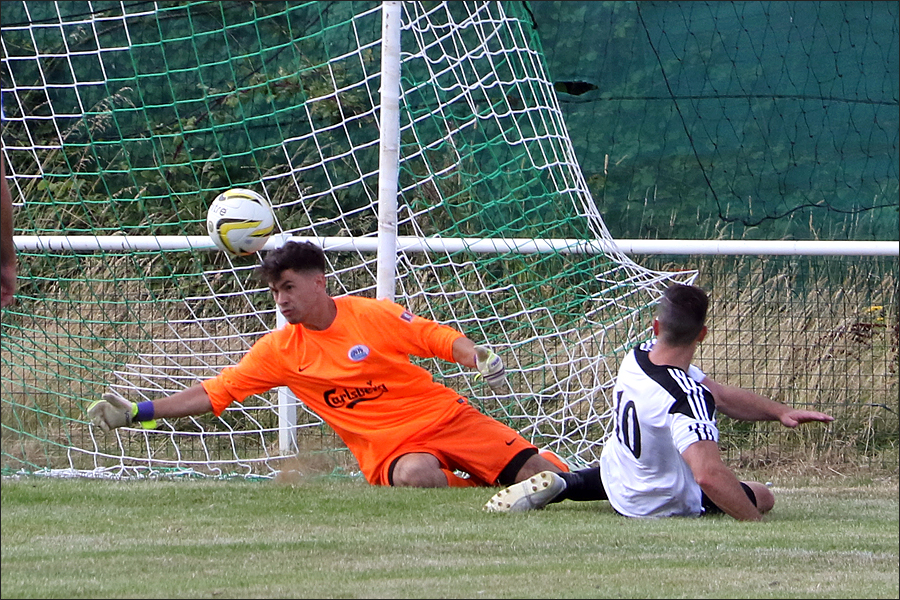 Point blank save from Rob Partington 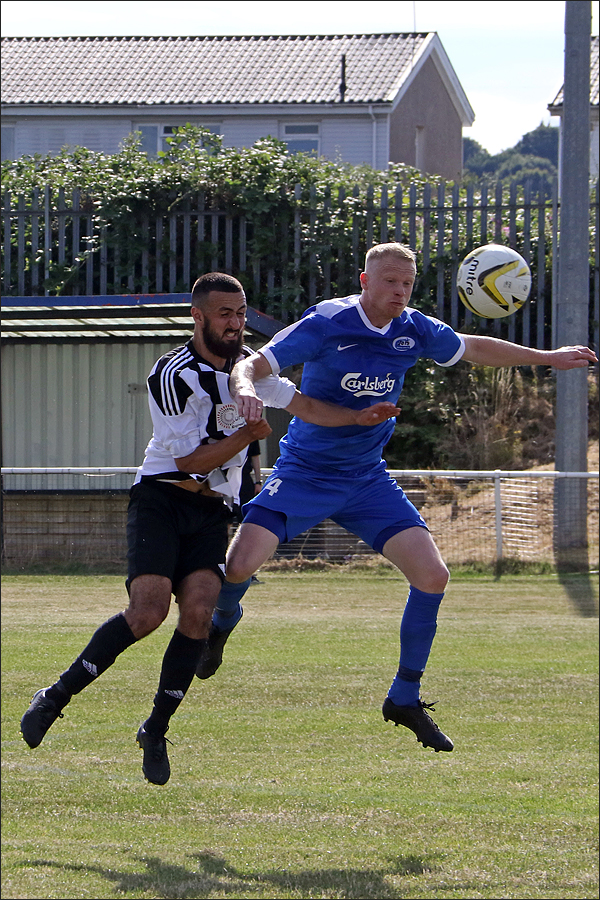 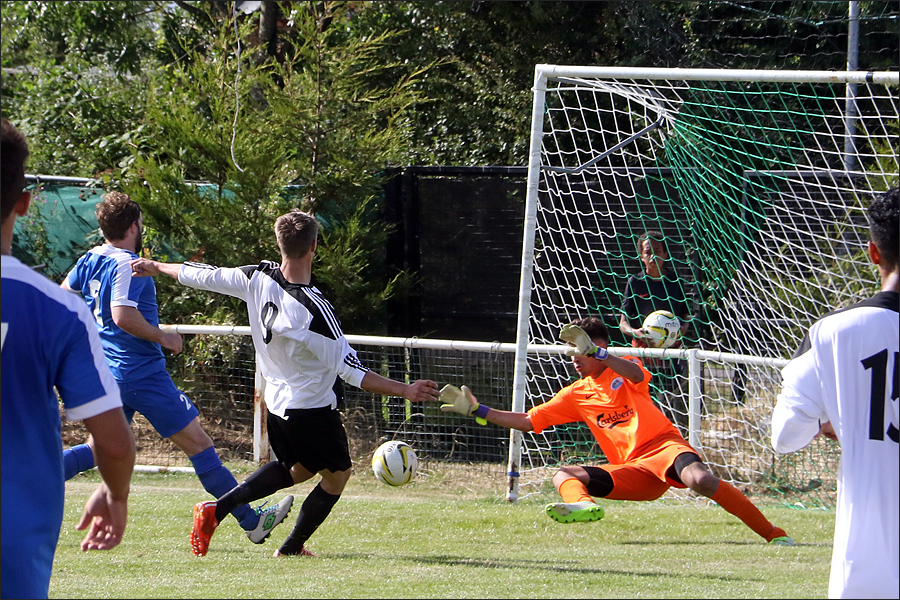 Rob makes another smart save 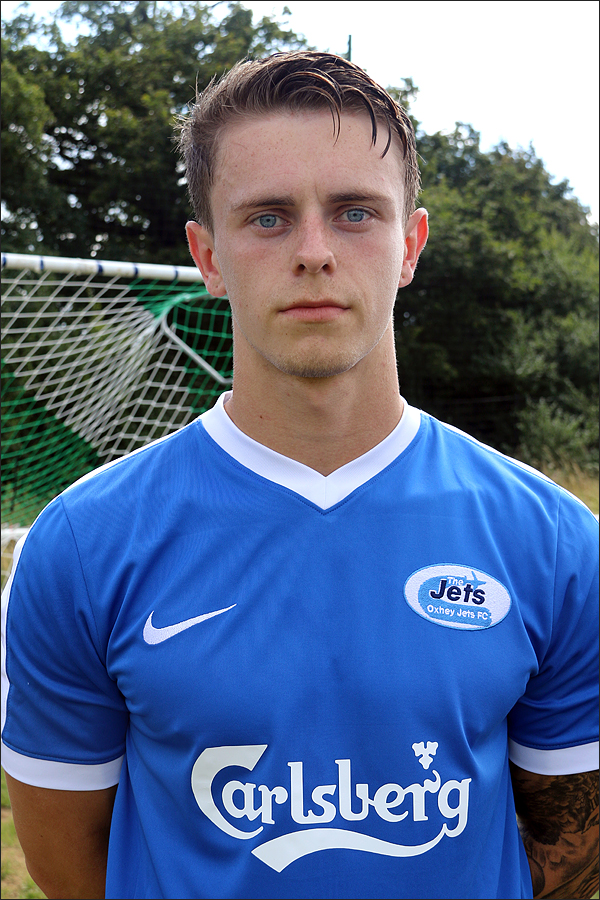 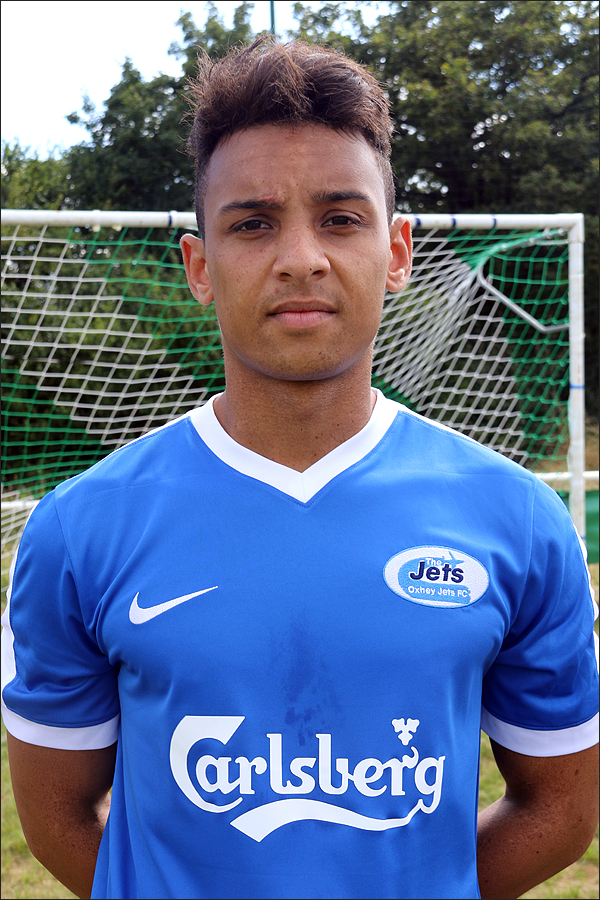 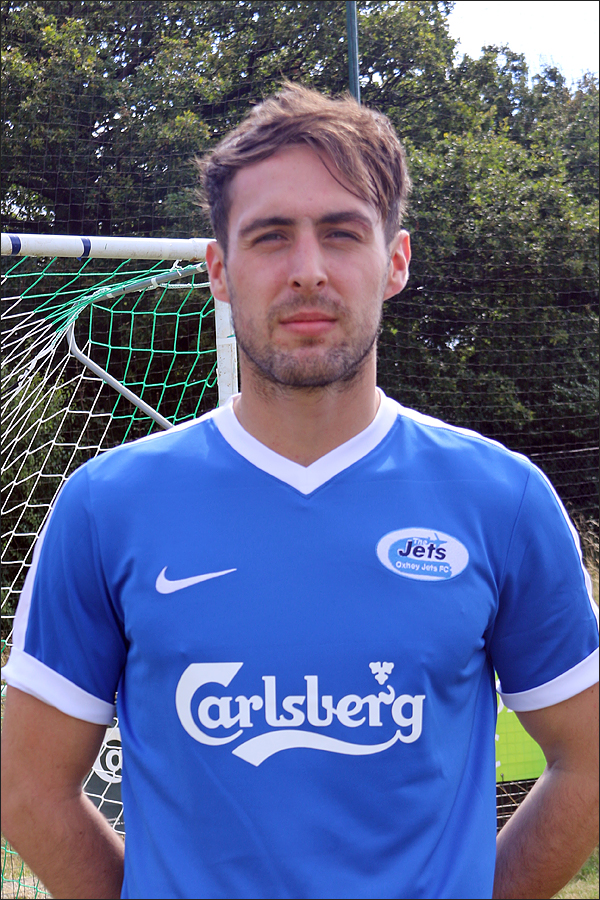 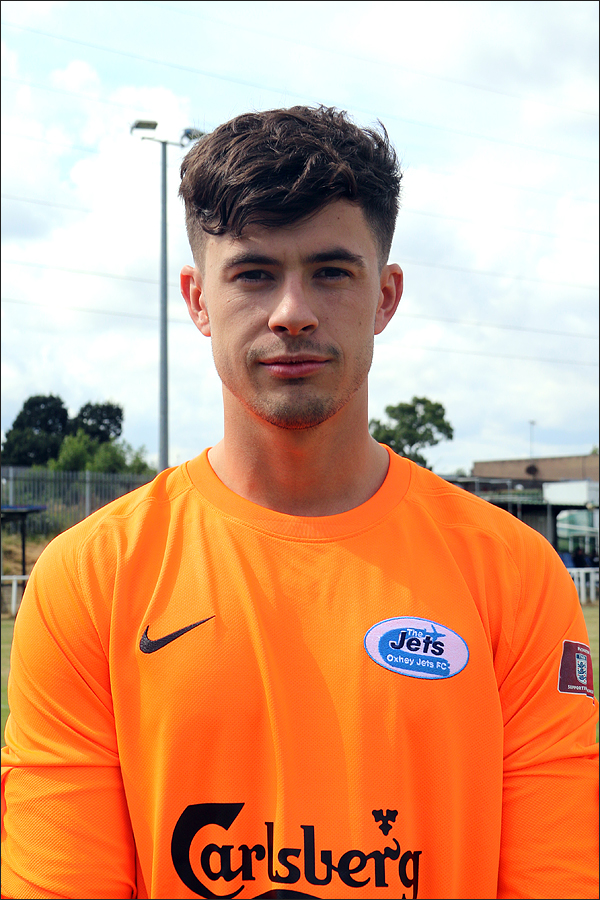 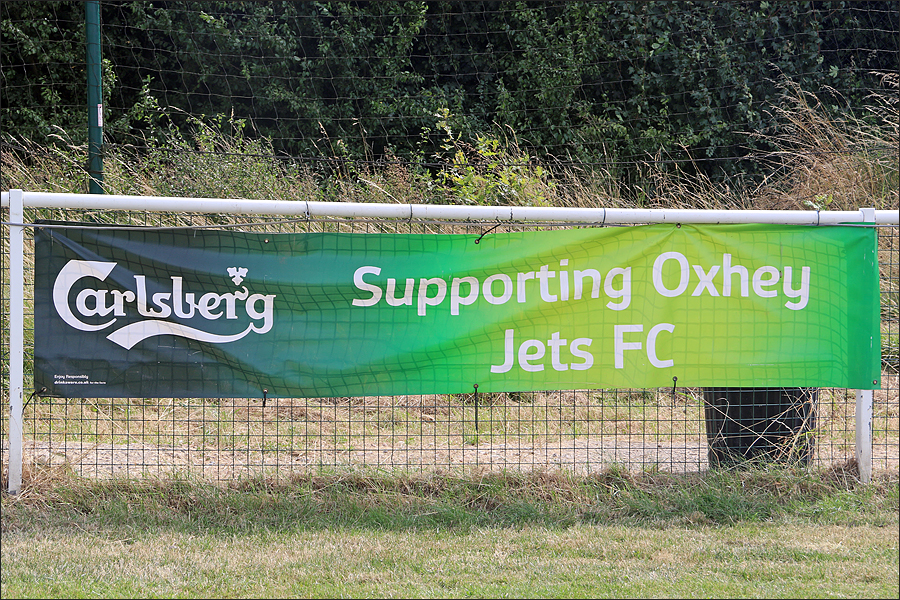 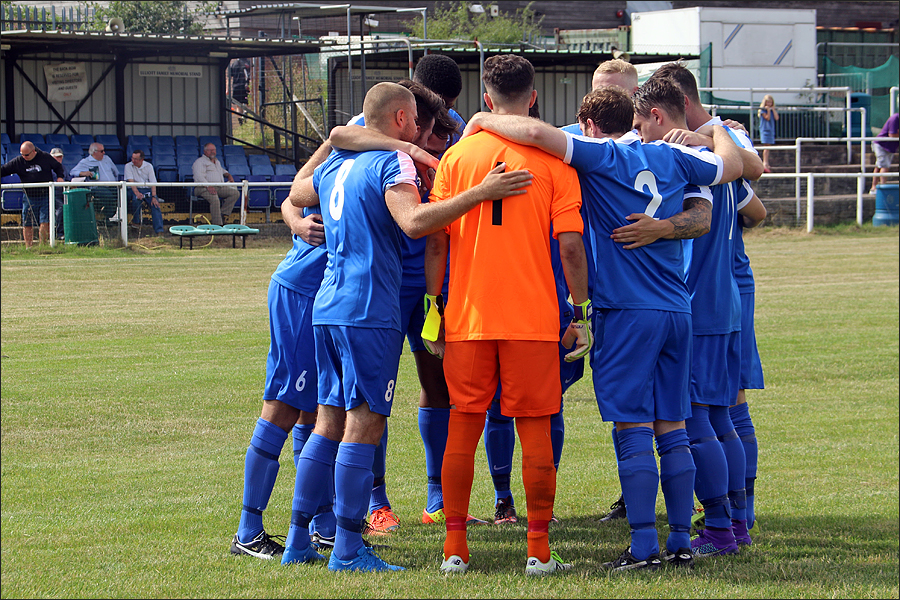 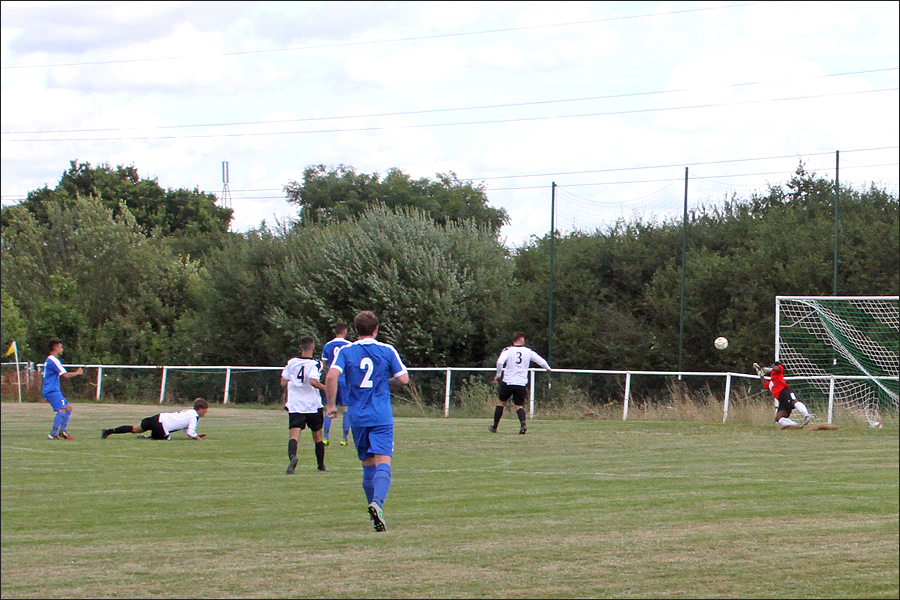 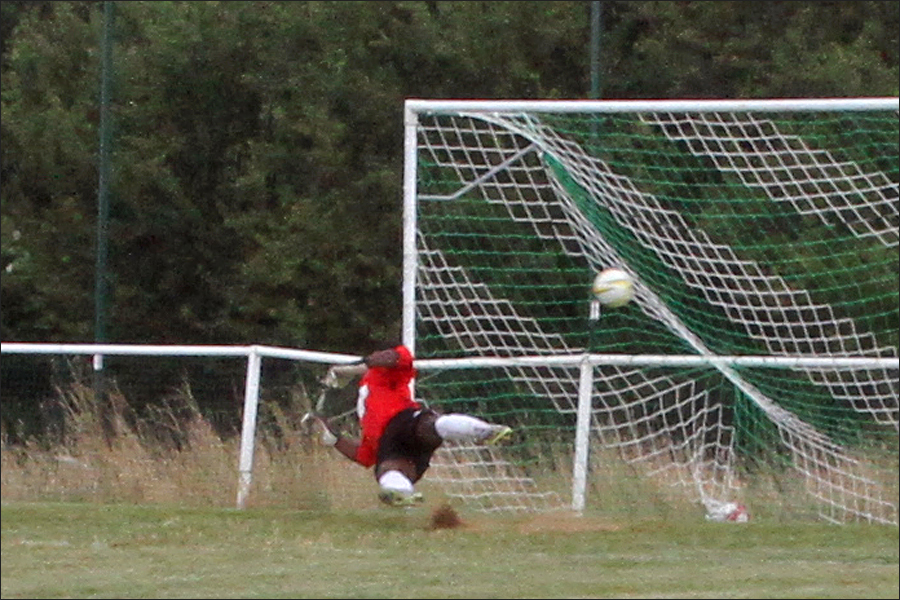 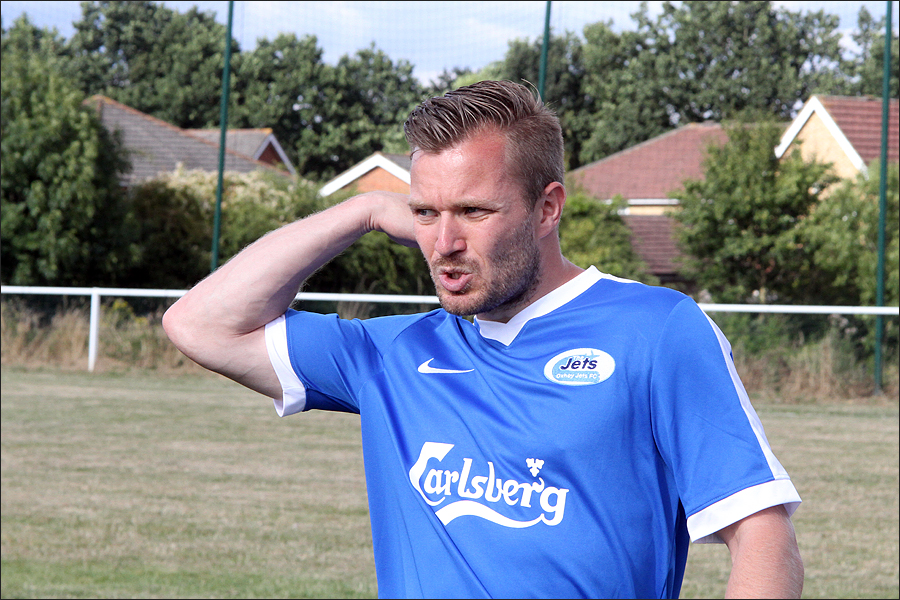 With Lee on the beach, Warren managed the team to their first league win 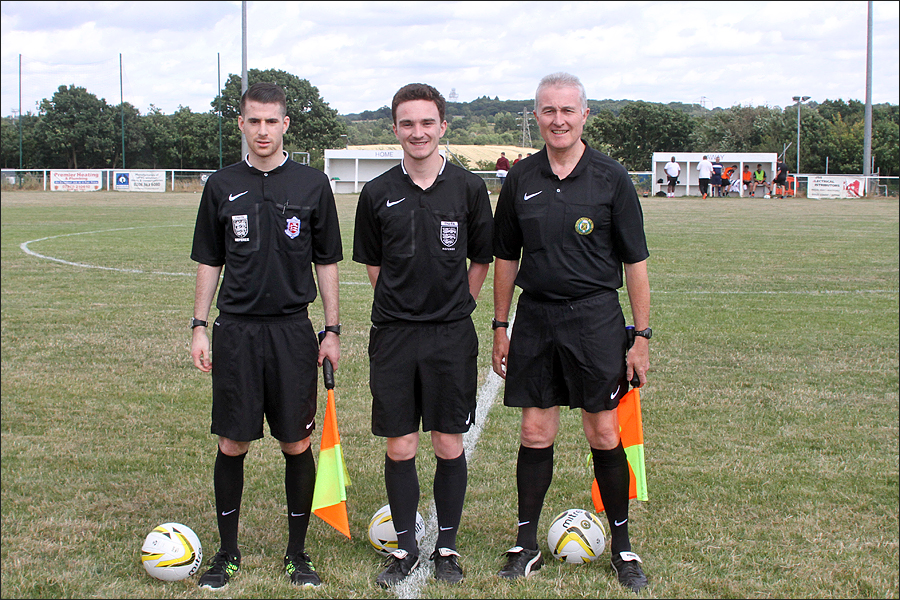