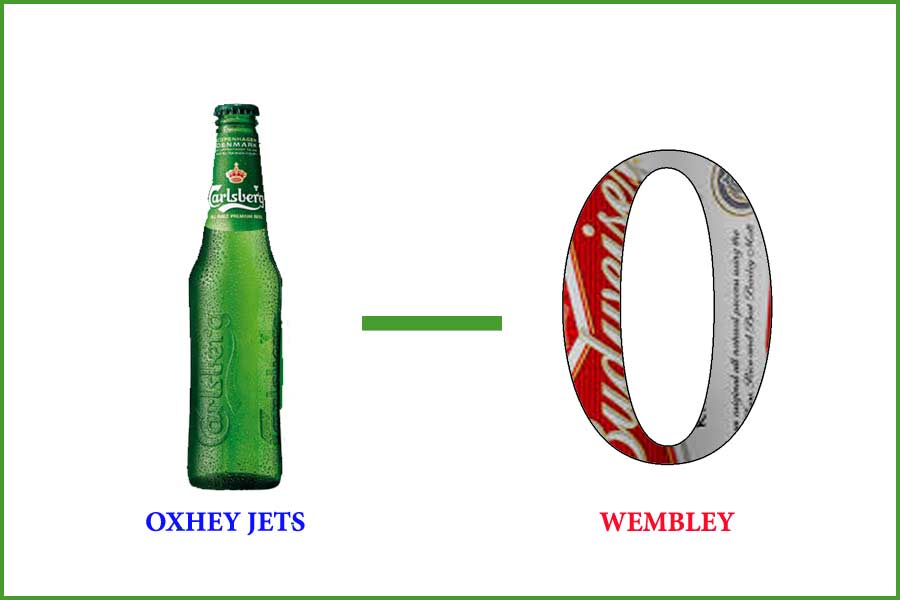 It was the Brewers classic as Carlsberg Jets took on Budweiser Wembley in the Premier division match. Wembley are enjoying a very different season to Jets as they are in the Premier division cup final and are 4th in the table just behind the main title chasers. Jets are in a relegation battle and defeat today with the other results going wrong would put Jets in the bottom two and a relegation spot so it was a call to arms pre-match as the managers laid down the situation to the players demanding more availability, effort and commitment in the final eleven games.

Jets have the wants and don’t wants and today the lads who played gave their all from the first whistle to the last to earn three valuable and probably unexpected points in the safety fight.

Jets really battled and earned the win. Scott Pugsley was denied by a super save on 11 minutes as Jets had the early edge in a very competitive match and thought they had the lead on 35 minutes when Adam Lowton tapped home, but he was denied by the flag in what looked a correct decision. 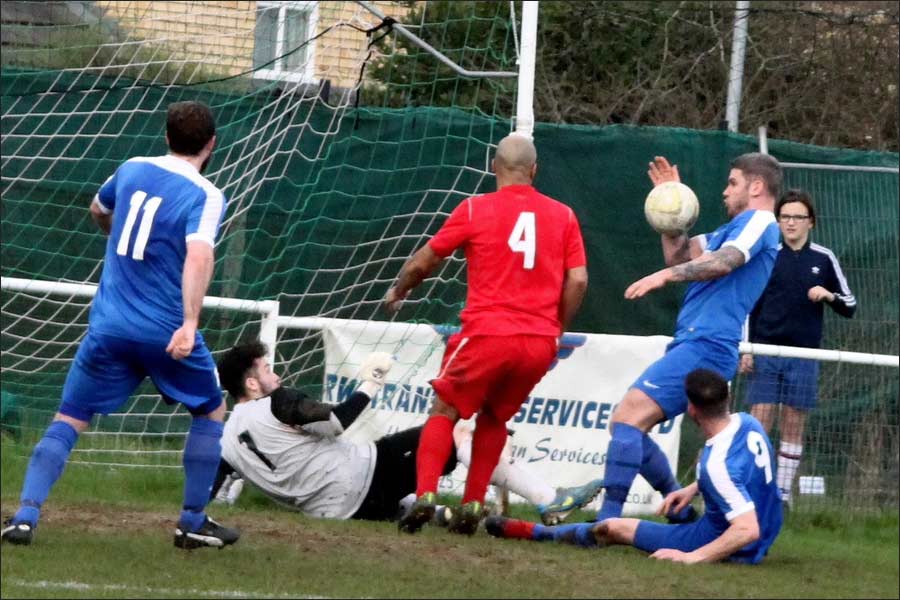 Jets carried on pushing in their best period and another excellent save by Cassells the Wembley keeper from Ian Hurst kept the score even. We started to think here we go again after Jets netted again and it was ruled out by the referee for handball by Jack Robertson (and in fairness the photos again proved the official correct). 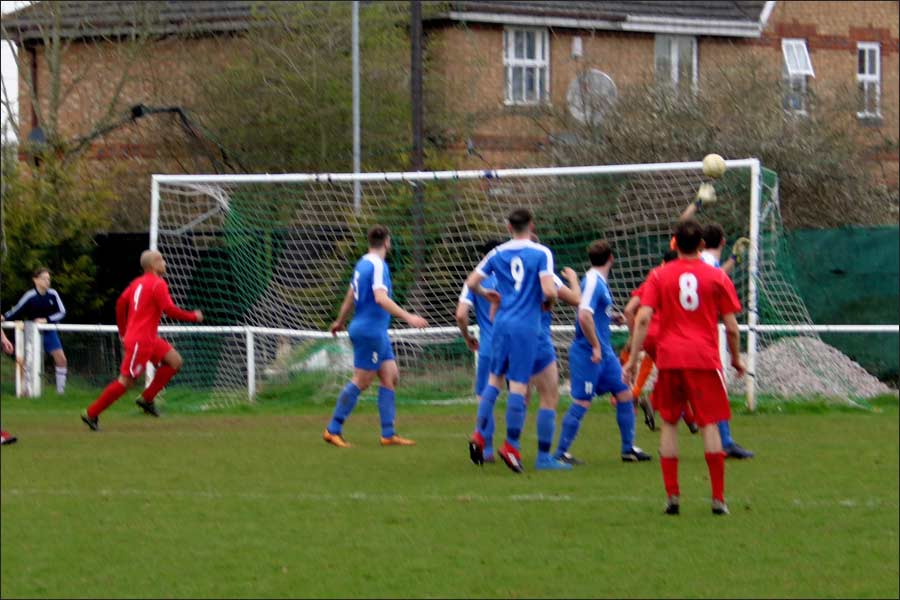 Was it again to be chances not taken and bang, defeat on the counter attack? It almost looked like it but skipper today Rob Partington pulled off a great save at feet to hold the score then a run, yes a run, by a centre half Liam James had the supporters legs twitching as they were willing the shot that eventually came and netted to give Jets the lead (41 mins). 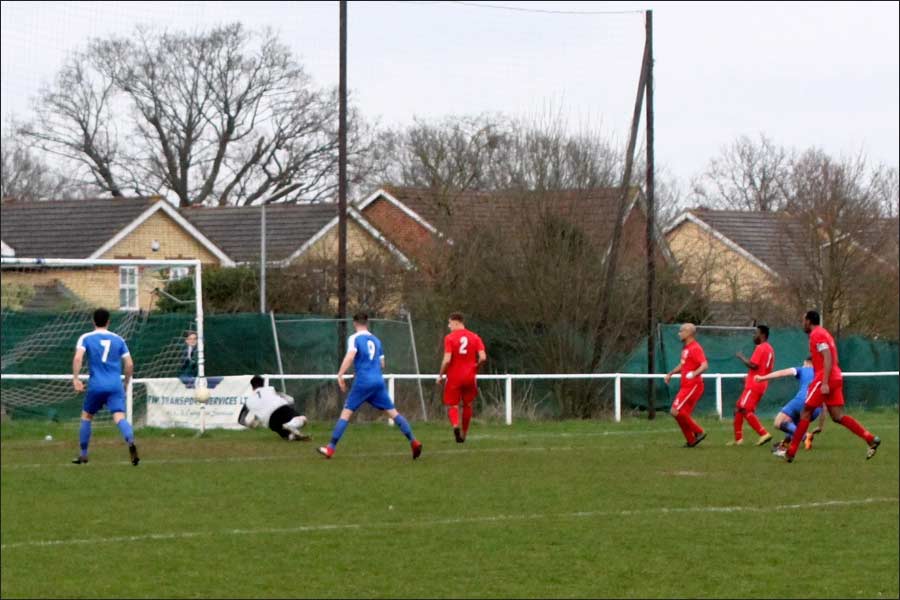 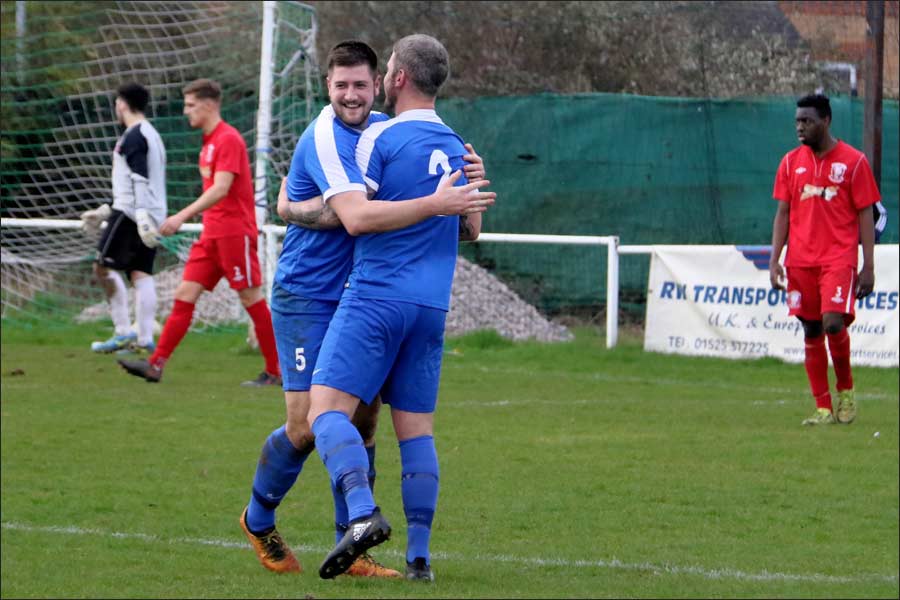 Liam James along with Jude Bell were having an excellent match and James himself probably made the tackle of the match in the first half to deny Wembley the lead, a tackle that if not perfect would be a penalty and red card, but he got it brilliantly right.

It was tight and close and very nervous in the second period. Jets went deeper but were still very dangerous on the counter. Wembley had the upper hand on possession but met a very dogged Jets side today who competed for every ball and every pass in a way not seen this season, and described by manager Lee Stedman as a special performance and the best of the season so far.

Rob Partington made two stunning saves and Wembley clattered the bar, while at the other end a fierce shot was handled and Jets were disappointed no penalty was given as the ref decided the player couldn’t get out the way.

As both sides did combat a few yellow cards were shown but it was competitive not dirty, just two sides fighting for every ball and Jets held out for three very very precious points to boost their survival chances.

The Carlsberg man of the match and a very deserved present and bottle from our sponsor went to Liam James, but to be fair today it was ‘Carlsberg Special’ team performance and two of the academy kids made their first team debuts as well, so it would not be correct to single out a shortlist as today the word “team” came out the winner.

It’s a hard fight but we’re back in the game. 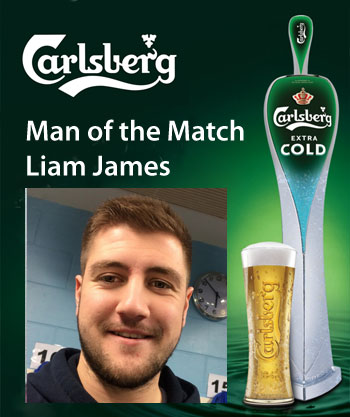 Leigh Stevens returned to the side and was influential 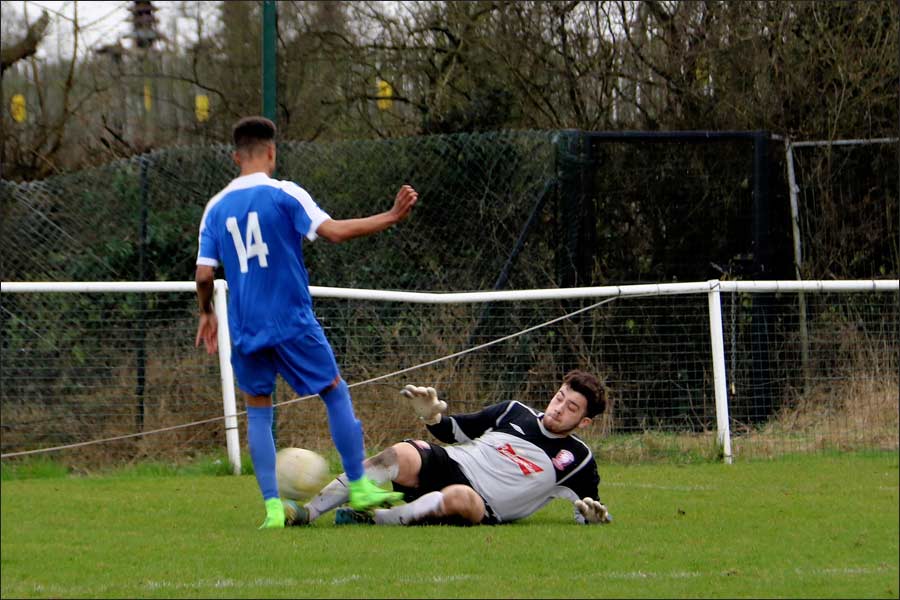 Liam Sole was denied by the Wembley keeper on his debut 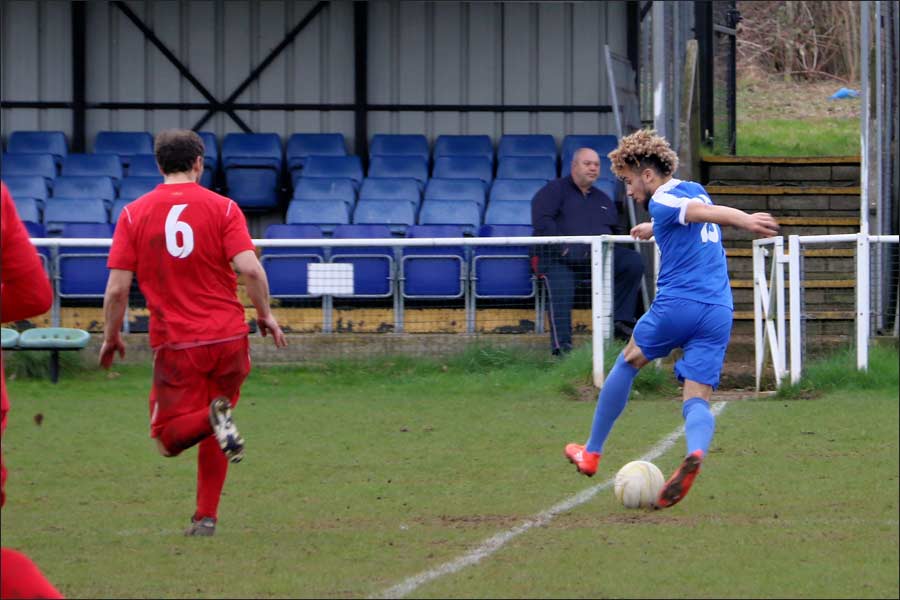 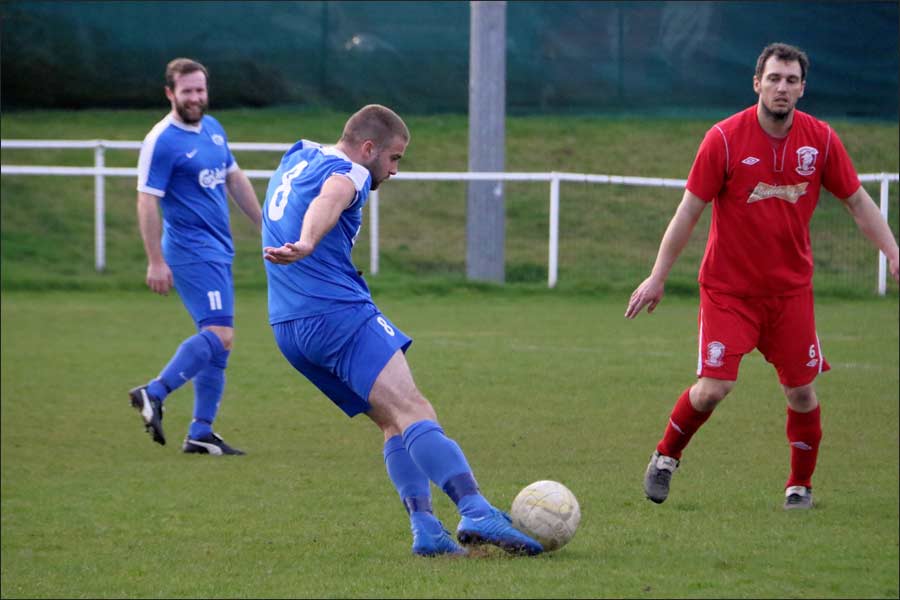 Scott Pugsley returned after weeks off due to injury 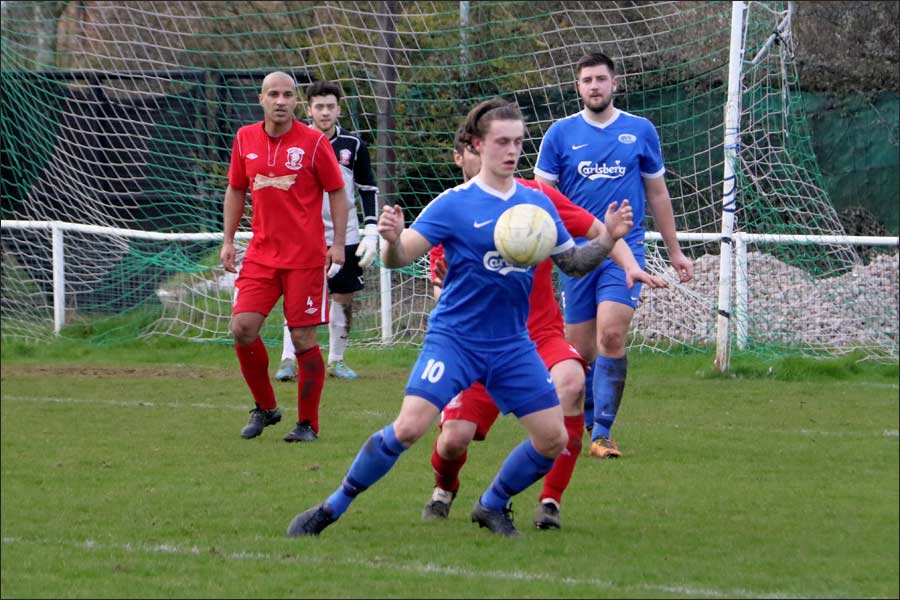 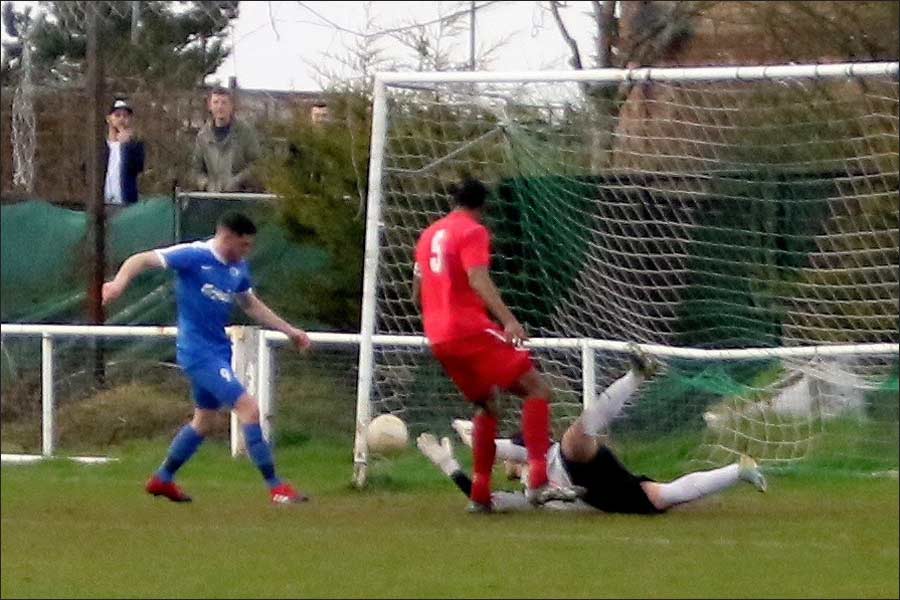 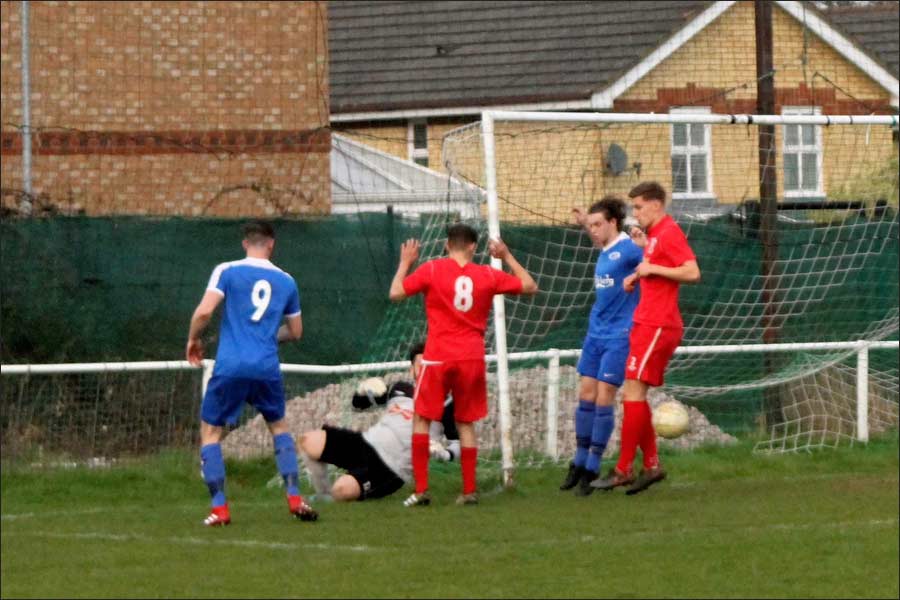