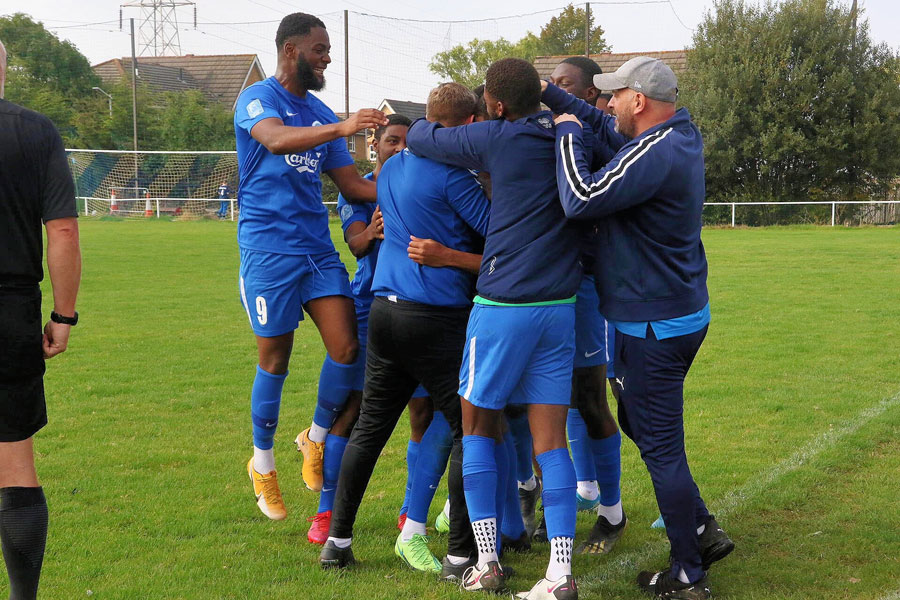 Jets battled and gained a valuable point against league leaders Leighton Town in front of a boosted attendance. It was a result that was to cost manager Joe Sweeney his job on the final whistle. Jets, however, from 2-0 up will feel like two points dropped. 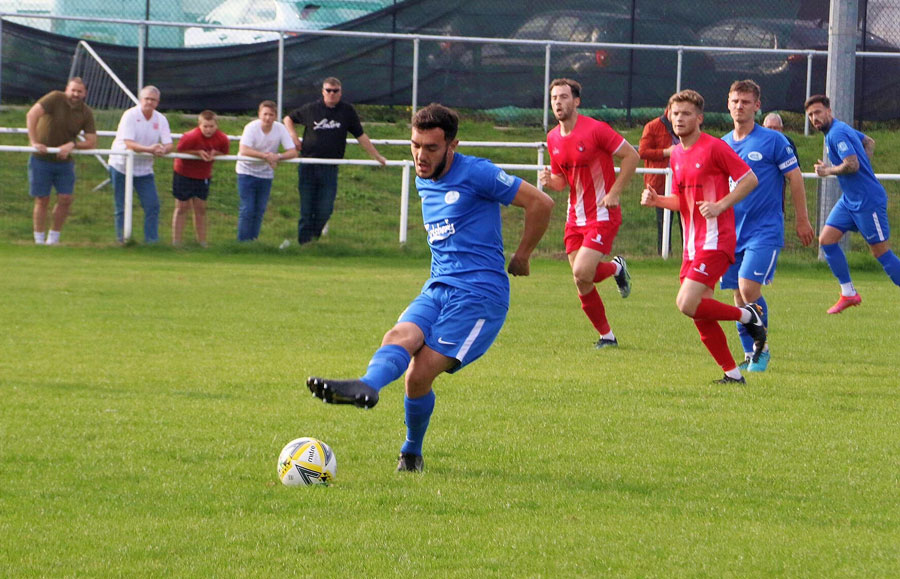 A welcome return to the club for Vass 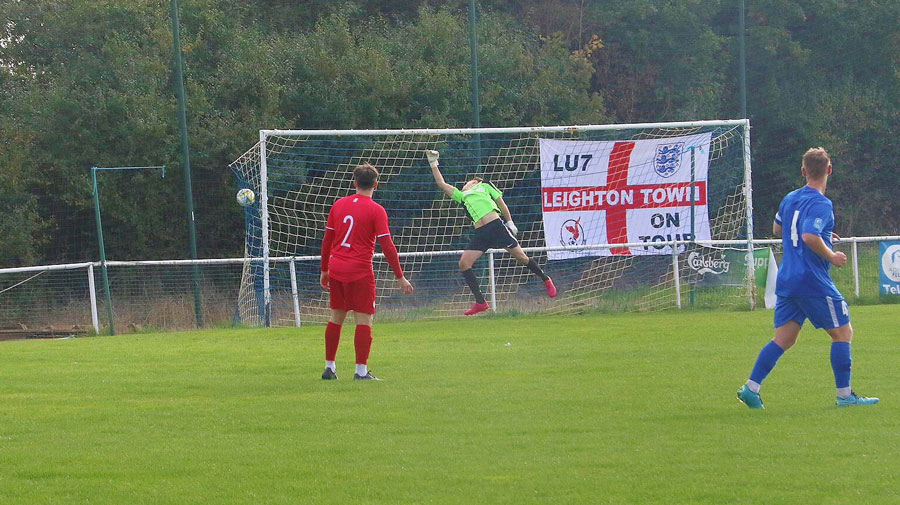 Pick that out! Ferrell’s 40 yard dipper finds the top corner.

Town definitely had all the possession and play in the first ten minutes and it looked like the promise of the last two games was a bit premature against one of the promotion tips, but on 19 minutes a most spectacular goal from a 17 year old centre back sent the crowd wild, from just over the halfway line Ferrell Charles picked his spot and pinged and incredible goal into the top bin. 1-0 Jets. 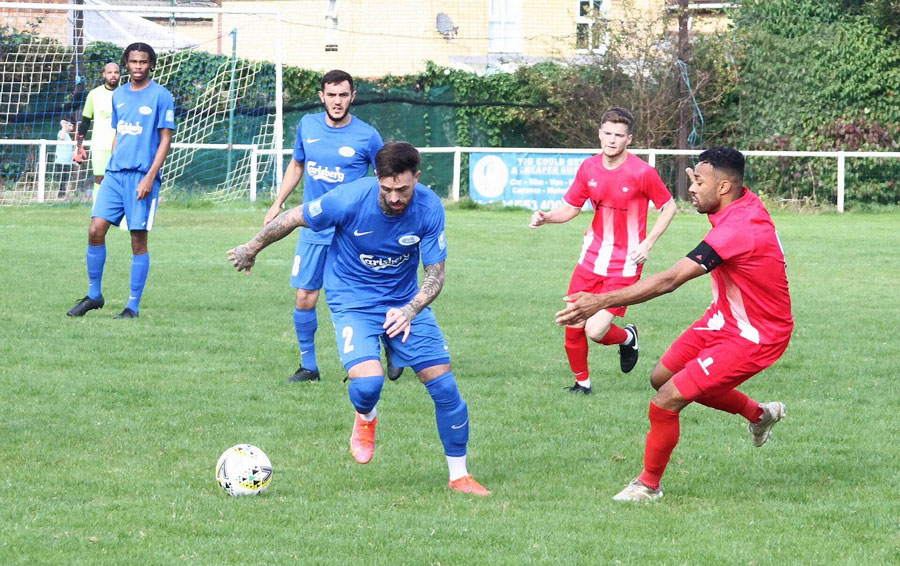 Jets did most of the defending but new manager Kevin Christou has them really organised making up for the young guns inexperience and we really are getting stronger each game now. One rare incident was a booking for warming up Town substitute Alfie Osborne.

There was an excellent debut for new signing Steven Wade who was directing the traffic at the back as Town threw everything at the Jet’s side in the relegation zone, but on the day there was nothing to indicate that gap. 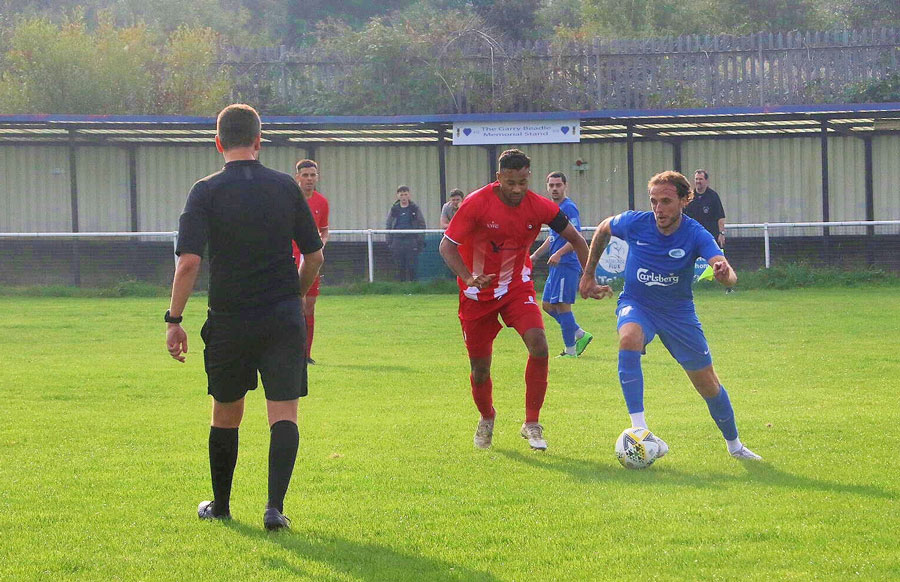 a blow for Jets, losing Tom Inch just before the break.

Jets lost the influential Tom Inch injured just after the keeper denied him with a fine save.

The second half was much the same as the first at the restart. It was all Town with Towell having a shot cleared off the line and the reboot high over the bar.

On the hour another special goal, one that had Steven Wade smiling, yes smiling, all the way up the field as he converted a spectacular header, 2-0 Jets and the shock was on. 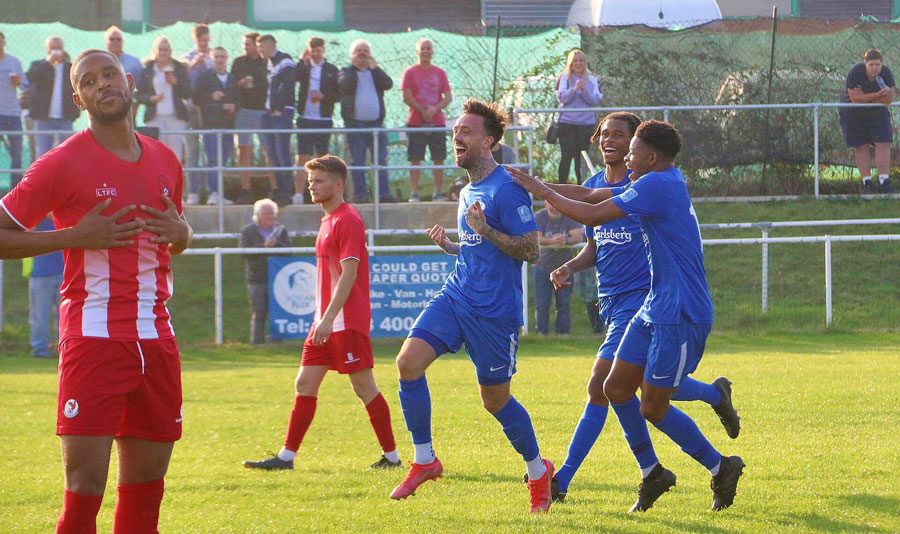 On 68 minutes, however, Town pulled one back. The Jets keeper seemed to have the ball but he claims a nudge took it out of his hands and converted. 2-1, now it was going to be under the cosh time for Jets who got a bit panicky.

On 78 minutes Town levelled through Parkinson and again it looked soft bouncing around before going just inside the post.

Jets lost Wade injured and his replacement Hassan Banguka lasted just 14 minutes on the pitch picking up two yellows and the red to leave Jets hanging on for the last ten minutes. 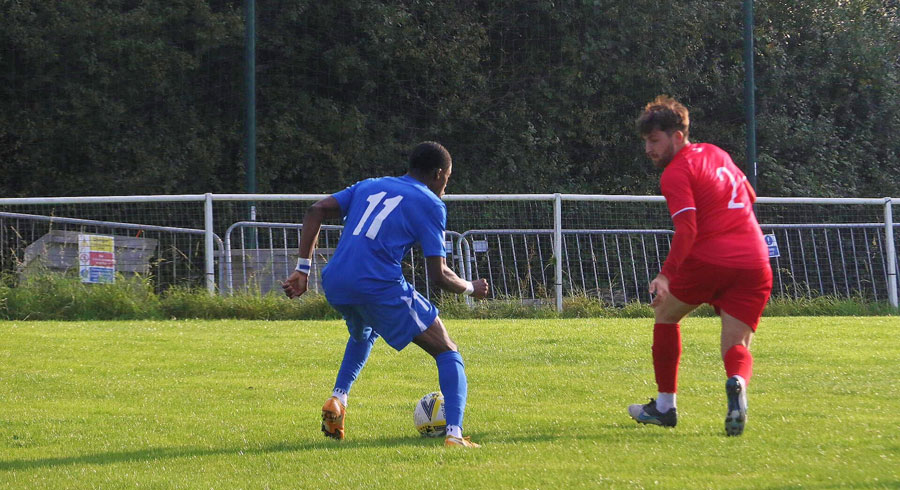 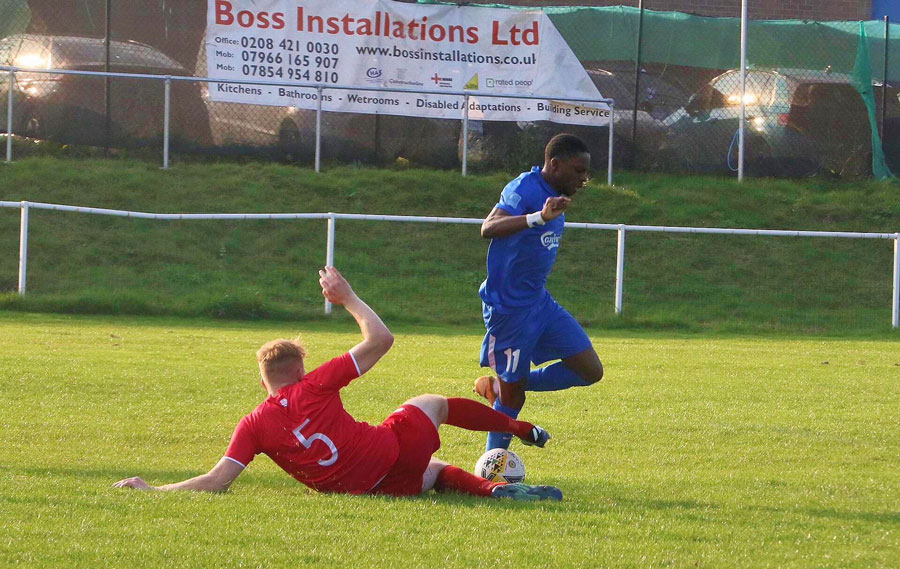 Perfectly timed saving tackle from the Town centre half.

Jets had a great chance when the impressive winger Kyal Williams went after a through ball and only a superb interception by a Town centre half denied him, then Giordmaina looked to be going in on a 1:1 chance but Vags got his touch wrong and the chance was lost.

The pen is put wide and Jets get a well earned draw.

On 90 minutes it looked like heartbreak for Jets as a reckless tackle, leg through the legs from behind, got Town a soft, very soft penalty. Jets were spared, however, as Town’s experienced goalscorer Webby shot wide hitting the noisy Town supporters flag. Jets had the point and Town stayed top but, sadly, manager Joe Sweeney was not the manager on exiting the pitch. 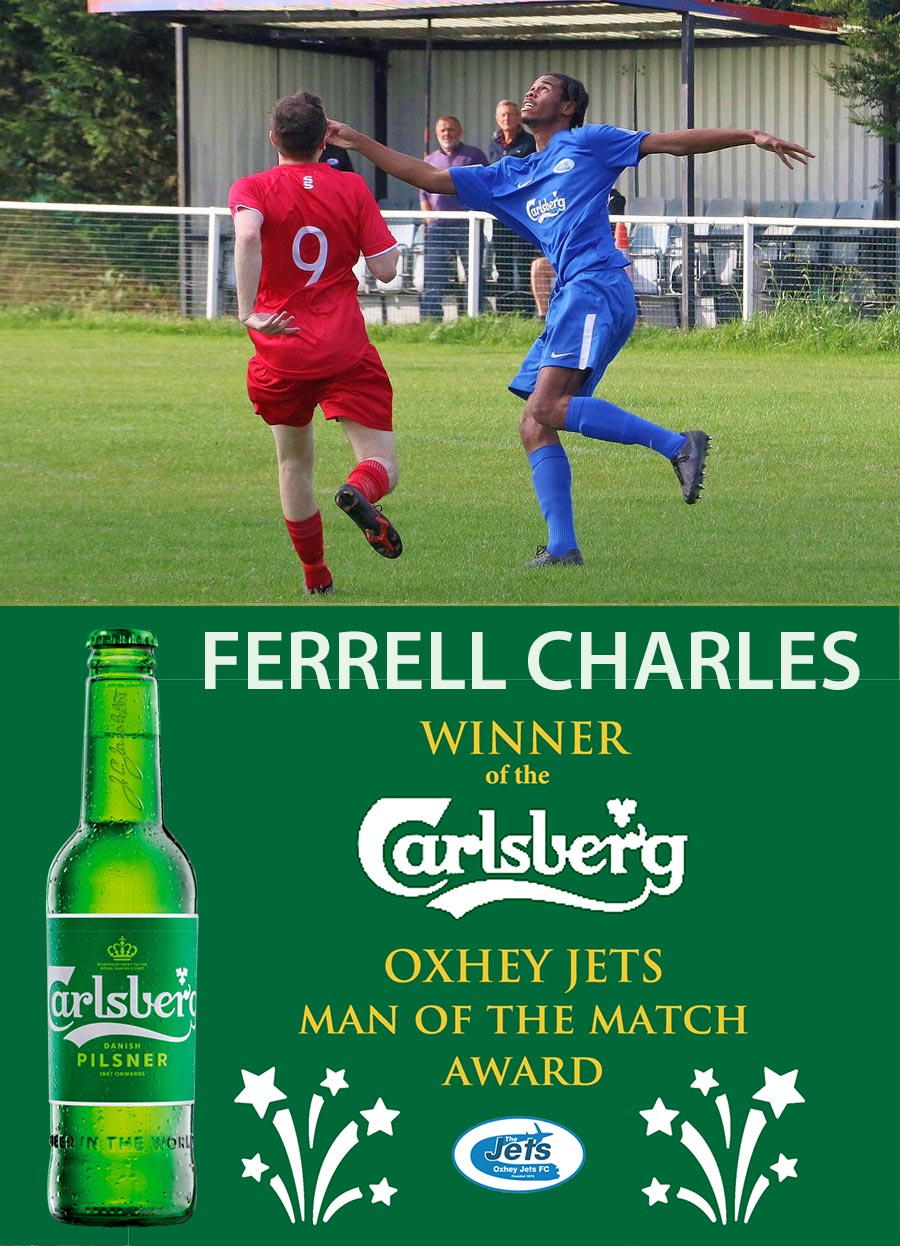 Jets Carlsberg man of the match was Ferrell, an outstanding goal and a performance way in advance of his years. 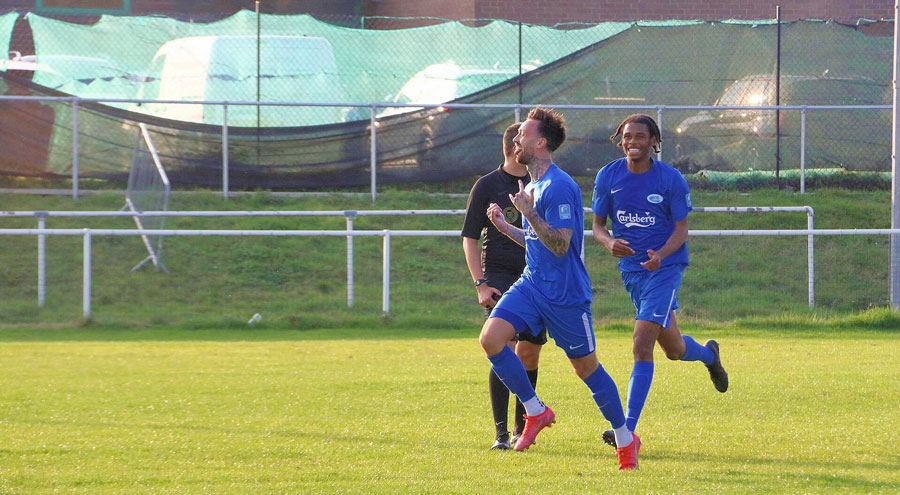 Smiles from our two goalscorers 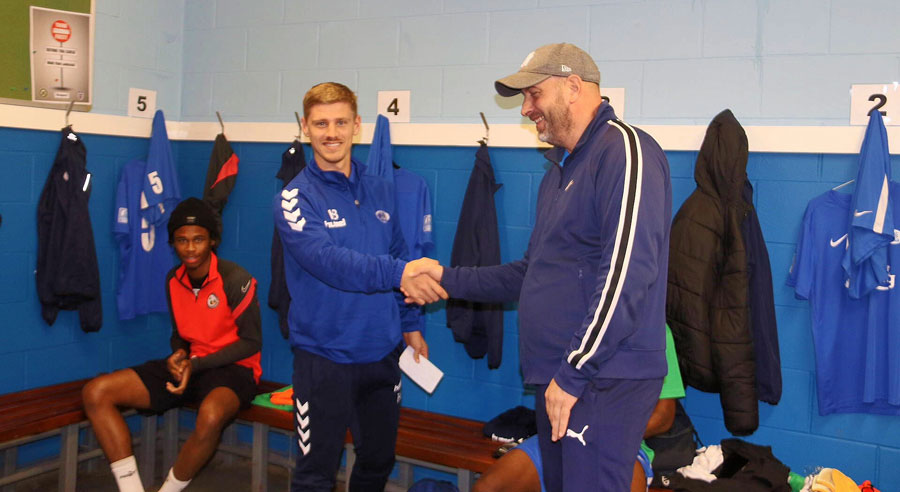 Harry Beaumont picks up his September Player of the Month award. 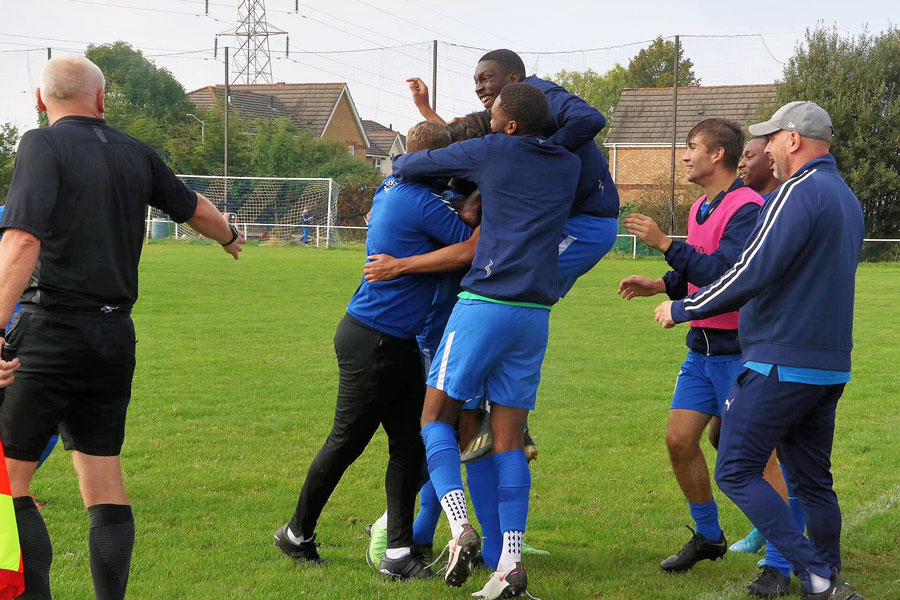 Jets are starting to get a smile back, the atmosphere is good, the staff constructive and moulding a unit again. There is a long way to go and points needed on the board, a goal scorer badly needed to convert chances to points, but there is much promise starting to show.