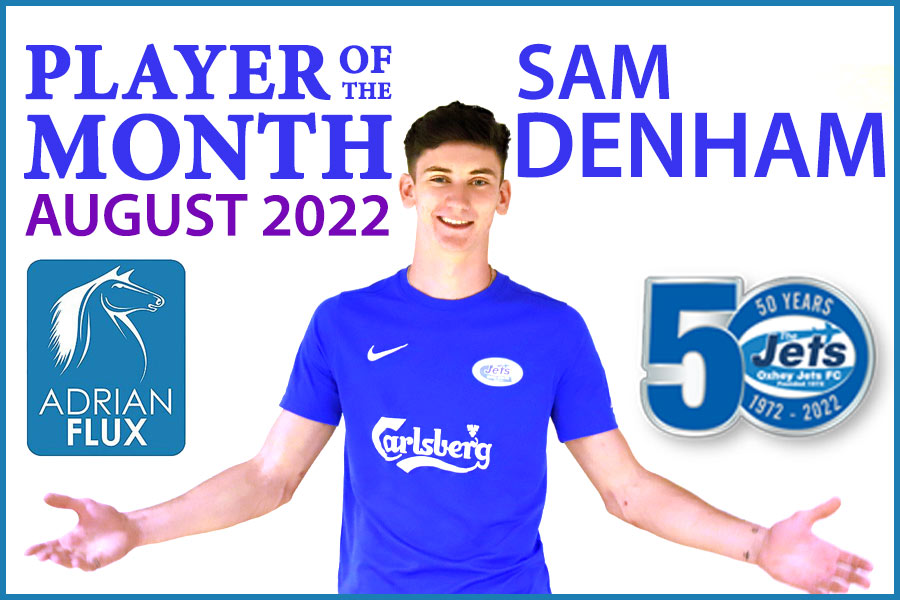 Congratulations to our skipper, Sam Denham, on winning the Adrian Flux Insurance August Player Of The Month Award.

Sam showed strong leadership and was ever-present in all our five games in August, picking up two man of the match awards and our goal in the FA Cup game against Phoenix Sports. He also built a strong partnership at the back with Chippy and helped us earn a clean sheet in the FA Vase match against Easington Sports.

Sam had several competitors for the award including Deago Dunbar-Bonnie who also had two man of the match awards; Ricardo Barrett-Harris who scored two vital goals for us; and consistent ever-present performances from Vass Mandeville, Kyle Matthew (who also scored a goal against Wembley), and Harry Brady. Tom Inch and Sam Cahill also earned man of the match awards.

Very sad to hear of the death today of a personal friend of mine & Jets John Feenstra. First knew John back in our HCL days & he’s a big supporter of our Poppy matches sponsoring memorabilia for the players. This photo is John in charge of the HM Princess Of Wales match. RIP John

Unfortunately our away game against @1972Jets U18s has been called off ..
I'm sure we will start playing some games soon 🤦‍♂️🤣
@OxheyJetsFans @KLFCofficial

After 3 weeks without a game we are back at home on Saturday for the first time in 2023 as we host @ReadingCityFC the first game of what looks to be a busy period for the Jets!

With @WatfordFC away Saturday get down The Boundary for a bit of local football!

With the game called off tonight the @1972Jets lads were put thoroughly through there paces thanks to Dan Bourne tonight . Great effort by all 👏🏼👏🏼👏🏼👏🏼👏🏼

The pitch whilst no frost overnight is still frozen and -1 at ground. Predicted temp -2 by 8pm means we are calling a pitch inspection mid afternoon

Back at Home and it is going to be a cold one!

We host @BroadfieldsUtd for our first home game of 2023!

Get down the Boundary and support the Jets towards an ever vital 3 points!

With the tomorrows forecast any news of Pitch Inspection will be posted as soon as we know!

The projections are currently updated as of 22nd January 2023